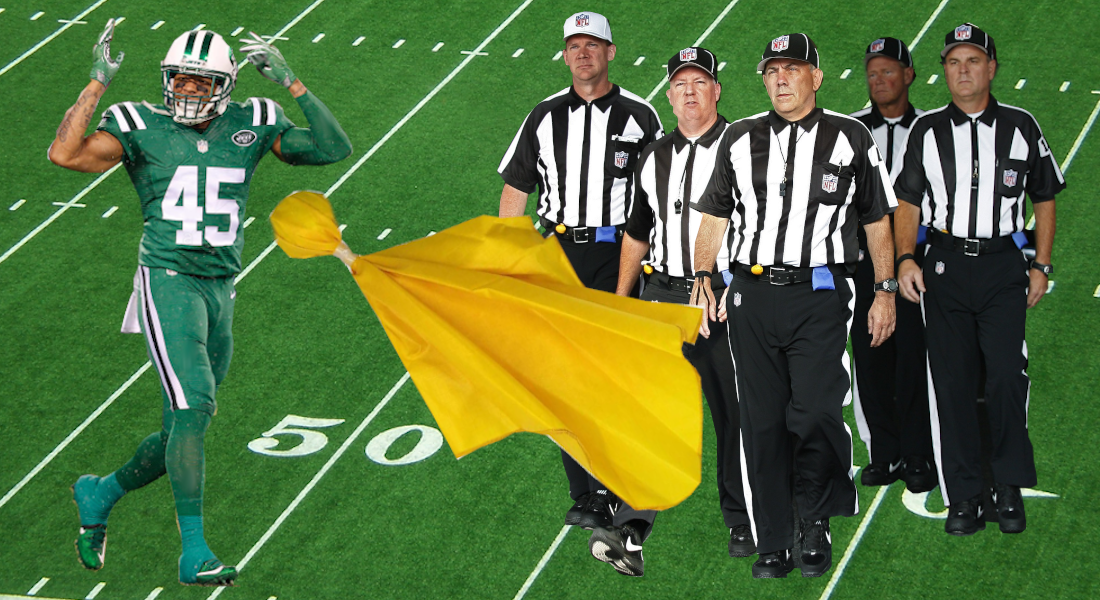 It would seem that New Orleans Saints fans aren’t the only ones concerned about bad officiating in the NFL, nor are they alone in taking the matter to court.  New York Jets free safety Rontez Miles has filed a lawsuit against game officials for violations of the Americans with Disabilities Act, and in so doing, left him vulnerable to injury. 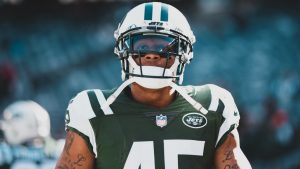 Rontez Miles requires a tinted visor to protect his eyes because of a condition known as Alopecia Areata.

Miles suffers from a condition called Alopecia Areata, which is known to cause photosensitivity and/or photophobia.  As such Miles must use a tinted visor with his helmet in order to protect his eyes and have adequate vision to play football and mitigate harm to himself and others on the field due to poor vision.

According to the complaint, on August 19, 2017, just prior to a preseason game against the Detroit Lions, an official approached Miles and told him to remove the shield.

Miles promptly informed the referee of his medical condition, and according to the complaint, others, presumably Jets’ medical staff also informed the as of yet unnamed official or officiating team to no avail. Rontez Miles was told that he’d have to remove the protective eye-shield or he would not be permitted to participate in the game.

The official(s) must have been unfamiliar with NFL equipment rules since Rule 3(a) permits players the use of a tinted shield with prior permission or else they acted in an arbitrary and discriminatory manner against Miles.

The complaint states that the Jets were fully aware of his condition and had approved his visor use.  Since Miles was fighting for a roster spot, according to an article on Jets Wire, he “obliged the referee and removed his visor.”  Blinded by the sun during the course of play, Miles experienced a collision because he didn’t see an opposing player in time to react.  As a result, the player’s hand went into his face mask and either a finger or thumb went directly into his eye.  The force of the impact resulted in an orbital bone broken in two places which required surgery.  While the lawsuit is currently sparse on details an Associated Press story fills in a few blanks.

“In the process of shooting his hands,”  Miles said, “I took a thumb or a finger directly to the eye.”  The eye, which needed to be surgically repaired, began to bleed profusely and trainers came out to attend to him, covering the eye with a towel.

“They were saying there was blood on the sideline and I couldn’t open my eyes and see clearly, though,” Miles said. “I just remember them putting pressure on my eye, and at that point when I heard them say ‘blood,’ I was real nervous.

“It was more so about my eye, my vision, my health after football, so that was traumatizing. But it wasn’t as bad when we went inside.”

X-rays revealed the fractures to the orbital wall and floor. Miles said it took him about 15 or 20 minutes to fully open his eye and was relieved when he was able to see through it.

“I mean, shoot, an eye injury and hearing that you’ve got to have surgery, you don’t know what to expect at that point,” Miles said.

At the time, as football players are known to do Miles appeared to downplay the injury, calling it a “freakish accident,” in the immediate aftermath, or perhaps he was taking his cue from Coach Todd Bowles, who referred to the injury as an “eye laceration.”  According to the complaint, the injury caused Miles to miss “several games” and placed his career in jeopardy.  The complaint also alleges other unspecified damages.

The referees for the game are referred to in the complaint as John Doe’s and they are listed as defendants in the case along with the NFL.  The lawsuit, initially filed in Morris County Superior Court in New Jersey on August 19, was moved to federal jurisdiction at the District of New Jersey last week.

Miles’ claims stem from violations of the Americans with Disabilities Act and the New Jersey Law Against Discrimination.  He states that Alopecia Areata is a protected disability under these laws and the referees, acting as the NFL’s agents refused to grant him reasonable accommodation that would permit him to do his job as required by law.

Rontez Miles’ lawsuit is the second by a Jets player currently in federal court claiming ADA violations.  The other lawsuit was filed by Erin Henderson, alleging discrimination by the Jets in regard to his bipolar disorder.

Permanent link to this article: https://advocacyforfairnessinsports.org/current-litigation/active-nfl-cases/rontez-miles-v-nfl/jets-safety-calls-foul-on-referees-in-new-lawsuit/