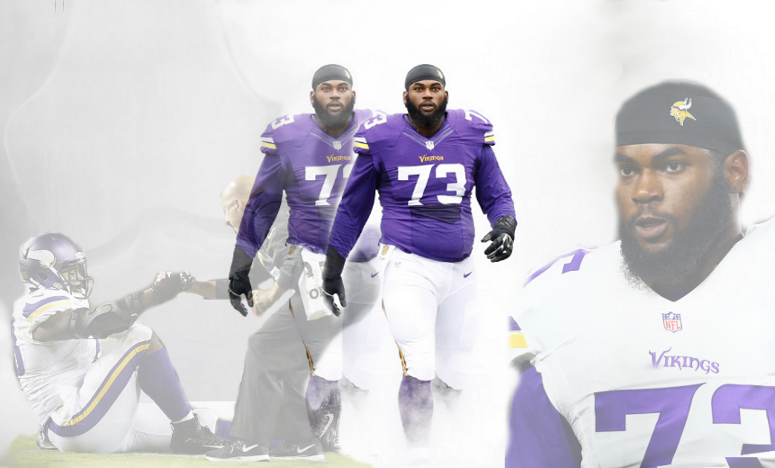 “Few medical errors are as vivid and terrifying as those that involve patients who have undergone surgery on the wrong body part, undergone the incorrect procedure, or had a procedure intended for another patient,” writes the Agency for Healthcare Research and Quality in an article describing medical errors which, when committed become a patient’s worst nightmare. These errors are called “never events” in medical terminology, not because the never happen but instead they are “errors that should never occur and indicate serious underlying safety problems.”   An article in the Telegraph states that almost 150 NHS patients have been harmed by surgical incidents that should never happen.  This is what former Minnesota Vikings defensive tackle Sharrif Floyd alleges happened to him in a recently filed lawsuit.

Though he was a promising first-round draft pick who proved himself to be productive for his team he battled knee and ankle injuries, like many other players but had managed them to remain in play.  Since he was about to enter free agency, and wanted to be at his best, he decided to consult famed sports orthopedist Dr. James Andrews in Florida.

Initially, Dr. Andrews had advised Floyd to manage the pain and continue to play during the 2016 season.

According to the lawsuit, Floyd traveled to Florida for an examination scheduled on September 22, 2016.  Upon arrival, he was shocked to learn he’d been scheduled for knee surgery.

While still apparently taken by surprise, having no prior indication of knee surgery, he consented to the minor clean-up procedure described.  Instead of performing this surgery, however, the doctors did a much more complicated and risky procedure which involved puncturing and drilling into the bone.

The procedure performed on Floyd consisted of using the burr to cause bleeding, and though not mentioned specifically in the lawsuit, the typical application of this procedure is to insert stem cells into damaged cartilage to promote regeneration.  The following section on rehab from the American Academy of Orthopaedic Surgeons, suggests that Floyd was not an ideal candidate for the surgery.

The article also stated, “Most candidates for articular cartilage restoration are young adults with a single injury, or lesion. Older patients, or those with many lesions in one joint, are less likely to benefit from the surgery.”  This alone should have disqualified Floyd as a potential candidate for the surgery. Even if all went well, the procedure certainly would not have allowed Floyd to return to play within three to four weeks as the doctors led him to believe when they recommended the orthoscopic clean-up, but rather several months.

Outside the fact that Floyd did not consent to this procedure, the recovery time was counter to everything Floyd wanted to accomplish—that was—to finish the 2016 season strongly and then present his best self for free agency for the 2017 season.  The four-year rookie contracts negotiated in the NFL CBA restrain new players from pursuing their market value for four years, and for productive players their first free agency bite generally accounts for the highest income of their careers.  At age 27, with a productive entry to the NFL, Sharrif Floyd wanted to be ready to make the most of this opportunity.  Instead, it was stripped from him altogether by yet another error.

Since the procedure Dr. Andrews, along with fellows Drs. Hendawi and Warrell elected to perform would result in greater physical pain, they opted for anesthesiologist Gregory Hickman to perform a post-operative adductor canal nerve block.

A bit of investigation bears out his claim.  An article in Orthopedics and Rheumatology, dated November 2015, indicates the newness of the procedure, reviewing studies conducted between 2008 and 2015 and noting mixed conclusions as to whether the procedure causes muscle weakness in the quadriceps—a risk that seems unlikely any athlete in the prime of his career would find acceptable.

In a situation in which the best case scenario would likely have been unacceptable to Sharrif Floyd, he found himself embroiled in not one, but two serious “never events” in that the block was improperly done, destroying portions of his femoral/saphenous nerves and surrounding musculature, not only ending his season, but also his career and the dreams he’d worked nearly his entire life to make a reality.

Because of Dr. Andrews’ reputation as a premier sports orthopedist, Floyd specifically sought him out to preserve and extend his career, but according to the lawsuit, it seems that Dr. Andrews left him in the hands of two relatively inexperienced fellows and a contracted anesthesiologist who either had no clue as to Floyd’s needs, simply chose to dismiss them or was incapable of doing the job he was entrusted to do.

The lawsuit also states that there was no communication with physical therapists that might cause them to look for or mitigate against post-operative procedure complications such as nerve injury.  As such, Sharrif Floyd has been irreparably harmed by medical negligence or worse.

Floyd is represented by Coral Gables, Florida attorney Brad Sohn, who has successfully recovered for other injured athletes including former Tampa Bay Buccaneers kicker Lawrence Tynes, who sued the Buccaneers in 2015 over a career-ending MSRA infection due to unsanitary conditions at the practice facility.  Sohn also represents the daughter of Aaron Hernandez against the NFL in what I believe is one of the most significant and potentially damaging lawsuits the NFL has faced.  If it survives the barrage of pretrial motions hurled by the league it could have more long term consequences than the entire uncapped settlement running for 65 years.

Eleven defendants are named in the lawsuit, their relationships demonstrated in the chart below: 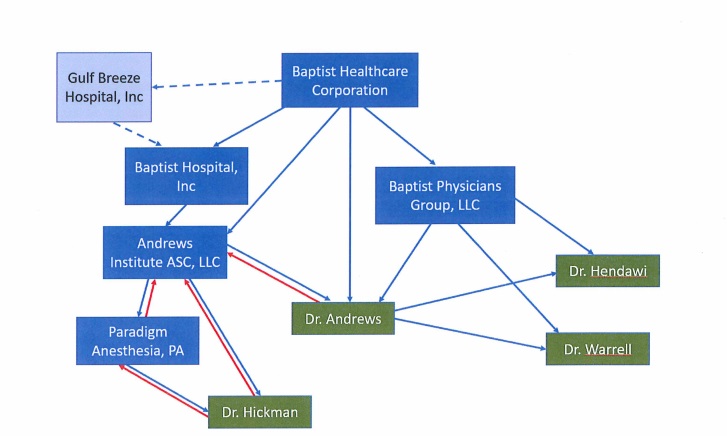 As explained in the lawsuit all the entities above are alleged to have contributed to the injuries sustained by Sharrif Floyd. 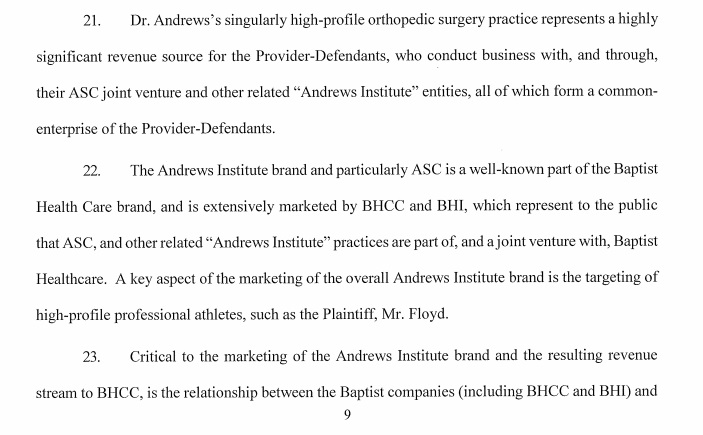 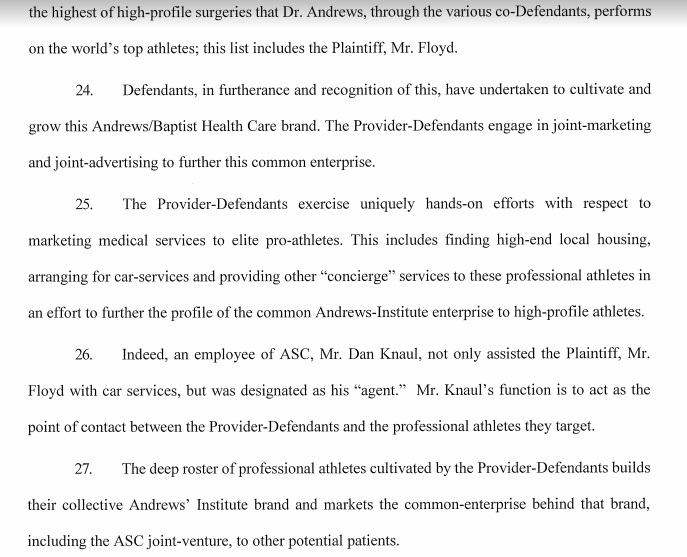 In addition to the fact that all of these entities worked together and stood to reap substantial profits from their association with professional athletes such as Floyd, the inclusion of the hospitals also strengthens the viability of the lawsuit,  As University of New Hampshire law professor and Associate Dean Michael McCann highlighted for Sports Illustrated:

Since all defendants are interconnected and stood to profit from their association with Floyd, it seems reasonable that they should also share in accountability for the loss of his career.  Their combined insurers may come closer to reaching the $180 million damages demand than merely those of the individual doctors involved.

As Professor McCann pointed out in his article, some on social media have been skeptical of the high dollar amount of Floyd’s demand, but it should be noted that in addition to projected salary over the course of a successful NFL career, he has also lost the opportunity for endorsements that sometimes eclipse a player’s actual salary.  His opportunities for future employment have been limited, and as such will impact not only him, but his children.  This amount also includes pain and suffering which for a man in Floyd’s position is profound in being instantaneously stripped of everything he has worked for since youth, his identity as a professional football player, and the camaraderie of the locker room, which many former players have cited as a particularly difficult adjustment in retirement, and even more so in a forced and unexpected retirement.  Because of the NFL’s aversion to guaranteed salaries, Floyd even lost the earnings he was already under contract to receive.

Professor McCann predicted that “Andrews will argue that he and his colleagues adhered to the relevant standards in the medical profession while treating Floyd,” and that “during a surgery, a surgeon might notice that the operated area has features that were not apparent in an x-ray, MRI, CT scan or Pet scan. The surgeon might then find it necessary to deviate from the expected plan.”

While this is true to an extent, it should be the doctor’s responsibility to inform the patient of possible complications and obtain informed consent to deviate should the doctor find it medically necessary.

An example that readily comes to mind for me is when my mother underwent surgery for colorectal cancer.  As the doctor discussed potential outcomes and scenarios of the surgery, my mother was able to make an informed decision as to what she deemed acceptable and otherwise, instructing the doctor to “do what he could but to preserve enough of the rectum as to prevent a need for a colostomy bag.”  It appears that Floyd was given no opportunity to instruct the medical team of his wishes, aside from his assertion to Dr. Andrews that he wanted as little downtime as possible in order to make the most of a critical junction is his career.  It also appears that his singular request was completely disregarded.

In comments to Law360, Mr. Sohn stated, “We believe what happened to Sharrif was preventable and the result of medical negligence. Doctors need to tell patients what procedures they’re having and what the risks are. And they need to perform procedures non-negligently. We have alleged and believe we can prove that what happened here was, very, unfortunately, the opposite.”

Permanent link to this article: https://advocacyforfairnessinsports.org/current-litigation/active-nfl-cases/sharrif-floyd-v-dr-andrews-medical-malpractice/former-vikings-sharrif-floyds-180m-lawsuit-reveals-nightmare-of-never-event-surgery/