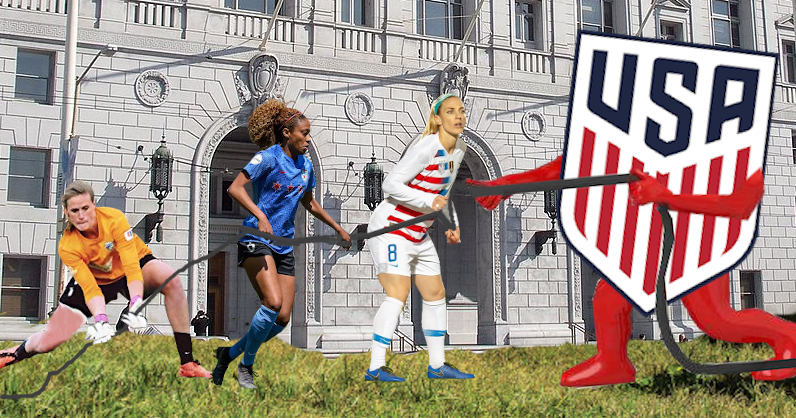 The US Soccer Federation continues to spend money on maintaining its misogyny and protecting its privilege instead of using those same funds to compensate the members of the United States Women’s National Team equitably. The latest incarnation of that is a petition for summary judgment from federal District Judge R. Gary Klausner.

The plaintiffs in the complaint followed suit, also seeking summary judgment from Klausner. While it could be a surprise if Klausner grants either petition, whichever side he would issue a ruling in favor of would still have work to do.

U.S. Soccer Federation Memorandum in Support of Its Motion for Summary Judgment

USWT Memorandum in Support of Its Motion for Partial Summary Judgment

An immediate appeal by the other party is essentially a foregone conclusion in that situation. The party whom Klausner hands a defeat to has likely already drafted a strategy as a contingency.

“If the case is decided by a judge or jury, there will be an appeal,” said attorney Kelsey Trainor, who has written on this exact subject for The Equalizer. “At the end of the day, it comes down to business. Legally, they must appeal to preserve any rights going forward. Business-wise, an appeal is a bargaining tool in a future discussion. Litigation is costly and it can be used as a mechanism to barter with in the event an agreement can be reached. ”

That seems more improbable than inevitable right now. Trainor has looked at Klausner’s track record and the raw statistics suggest he will deny both petitions soon.

“Seeing as the judge in this case has only granted 41% of motions on summary judgment (WESTLAW) and 61% of all rulings happen between 24 and 63 days with an average time to rule being 47 days,” Trainor explained. “We should know sooner rather than later. In a case of this magnitude, where the ramifications are not just in the law, but in public perception, I can see it going either way. There are parts of this case that can and should be decided on the law by the Judge. Whether they will be decided on a motion for summary judgment remains to be seen.”

The arguments for summary judgment are as distinct as one would imagine given the positions of both parties in this dispute. US Soccer is asking the Klausner to dismiss the complaint altogether.

To that end, US Soccer argues that the USWNT has negotiated a collective bargaining agreement with US Soccer that is wholly separate from that which US Soccer has with the Men’s National Team. Additionally, US Soccer states that the work performed by those two sides is not similar enough to satisfy the conditions that would merit enforcement of federal labor laws that seek to counteract wage discrimination based on sex.

The plaintiffs contend the opposite in their petition. They maintain their allegations that their labor is similarly equal and that because of such, FLSA concerns trump any tenants of the CBA that US Soccer could use to deny compensation equitable to what their male counterparts receive.

Klausner can’t grant either petition without formulating an opinion on that crucial point of contention. His opinion in rendering such a decision would effectively state whether or not in the eyes of the federal judiciary the economics of the men’s and women’s teams can be compared in a way that shows inequality.

Because that’s the pertinent question not only before Klausner but in this dispute at large right now, such a decision from him would strengthen the leverage of the party who Klausner favors in that ruling. That leverage would be strongest in resumed negotiations to settle the lawsuit.

“Settlement is a strong possibility, especially given the results of the motion for summary judgment,” Trainor commented. “Depending on if the judge issues and brief with his order granting or denying, we could learn more about how the judge is inclined to rule. We’ve already seen a bit of his statements in the earlier class certification decision and order.”

While Klausner’s decision to certify the class would seem to suggest he might favor the plaintiffs, that doesn’t necessarily mean he would do so to the extent of granting their petition for summary judgment. Such a “bias” could only extend to denying both petitions.

As Trainor said, litigation is costly. For a side that also gets handed a loss at the district level either via a jury decision or Klausner granting the other side’s petition for summary judgment, that cost might seem more exorbitant than settling.

If Klausner does grant the plaintiff’s petition, US Soccer will likely push hard for a settlement. It’s already at a disadvantage in the court of public opinion so being behind the curve in the federal court system as well would supply some significant motivation to end the dispute.

In that scenario, however, the USWNT has two main interests to balance. This isn’t just a cash grab for the plaintiffs. They seek to reform the conditions of their labor as well.

“I think if the case is to be settled, there will be a balance between these two ideas,” Trainor explained. “It’s the only way to course-correct moving forward. I think that the issues of law in this case and comparing economics will push either both these things to occur or neither. The middle ground may not be met by a jury.”

That points to it possibly being in the best interest of the plaintiffs to settle even if they come to the negotiations from a position of strength. If they leave this issue up to a jury, they may get a substantial financial award but none of the policy changes they seek.

That doesn’t mean they would be willing to “punt” their claims for back pay in exchange for US Soccer meeting their list of demands, however. As Trainor commented, a balance between those two interests is important for the plaintiffs to truly claim a win.

“The mediation fell through early on with the indications being clear that US Soccer was not coming in with making these significant improvements,” Trainor added. “At this point, in terms of making a statement and also setting up future precedent between the two sides, there needs to be compensation involved that is meaningful.”

If Klausner grants the petition of US Soccer, however, the path forward may not be so different in terms of how this dispute ends but the terms of that cessation. Because the onus would be on the plaintiffs to substantiate not only their argument that their labor is similarly equal but that Klausner’s (or a jury’s if this case actually goes to trial) decision was faulty as well, pressing on to another day in court could seem less appetizing than US Soccer’s best offer.

Because Klausner’s decision to grant either petition would also grant that party a significant upper-hand in bargaining a settlement, such an agreement is unlikely until Klausner issues a ruling on both petitions. The track record suggests those rulings should come soon and the likely outcome is he will deny both petitions.

If that’s the case, then whether or not this dispute will actually go to trial depends on how committed both parties are to the cost of litigation and risking what could be an unsatisfactory jury verdict, even in a technical victory. Right now, however, the future is in Klausner’s hands.

Permanent link to this article: https://advocacyforfairnessinsports.org/current-litigation/current-miscellaneous-cases/summary-judgment-would-give-either-side-tremendous-pull-in-uswnt-labor-dispute/