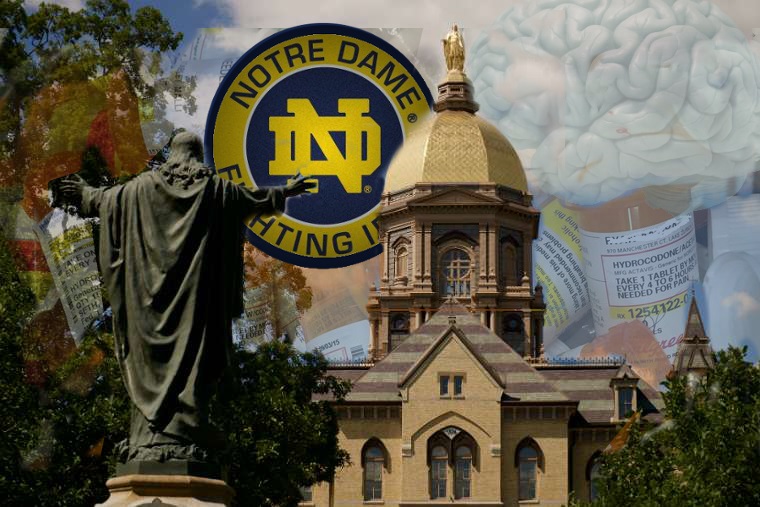 There’s no denying the number of civil lawsuits against the NCAA and member institutions alleging mistreatment in healthcare by former American football players is mounting—recent reports estimate as many as 300.  Many of them make very similar allegations, that the NCAA and the athletic department knew or should have known about the dangers of playing the sport at that level and failed to act appropriately.  A new lawsuit filed in the state of Kentucky ups the ante considerably.

Many of Askin’s allegations are fairly standard for lawsuits common to his. The complaint lists the available scholarship on the subject of brain injuries at the time Askin was engaged for Notre Dame and the NCAA’s/Notre Dame’s responsibility to protect the health of Askin as an athlete.

Askin and his attorney J. Bruce Miller have also made some allegations that are uncharted territory for suits against the NCAA, including claims that he was illegally and improperly administered controlled substances for pain management during his playing time for the Fightin’ Irish.  Not only does he assert that doctors and trainers were illegally administering medications, but they were even using a medication approved only for veterinary use on humans.

Of particular concern was usage of the drug, Supac.

The lawsuit states that Askin was also injected with Marcain, an anesthetic injected into patients during surgery, and Kenalog, a steroid known for multiple side-effects.

A few prior lawsuits by former professional players have levied combination head trauma/painkiller allegations against the NFL, but this is the first such known suit against the NCAA and one of its members.

Askin asserts that between 1982 and 1986, the years he wore the uniform of the Fightin’ Irish that Notre Dame and the NCAA should have been aware of the risks of mTBI and the latent effects of brain injury, but instead of protecting him and others, he was taught to use his helmet as a weapon, while injuries were masked with various painkillers, such that he didn’t even recognize when a serious injury occurred.

According to the filing Askin suffers from significant symptoms of neurodegenerative brain disease, which he was diagnosed with in Feb. of 2018. Askin states his symptoms include overall cognitive decline, loss of memory, personality change and potential early-onset Alzheimer’s disease. The cost of care required for these conditions is extensive and burdensome on Askin because he is unable to maintain employment because of his neurological issues.

While Askin believes his injuries were initially caused by repeated blows to the head he sustained playing football for Notre Dame, he argues that issue was worsened by the athletic department’s application of pain-relieving drugs. Askin alleges that Notre Dame coaching staff members and athletic trainers administered various drugs to him without a prescription regularly.

He reminds the Court of the NCAA’s history and supposed mission, that apparently got lost under a bag of money. 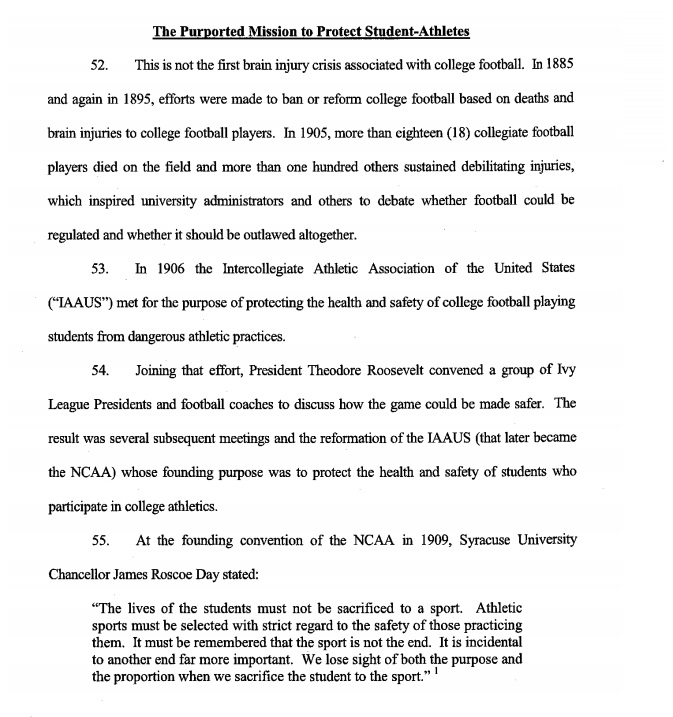 “Since its inception, the NCAA has held itself out as the supervisory force and enforcement body over the conduct of intercollegiate football events and practices throughout the country. It voluntarily shouldered since inception a legal duty to protect the health and safety of student football players, including the Plaintiff John Askin,” the complaint reminds.

But somewhere along the line, college football became very profitable due to its amateur model and the only rules the association tends to enforce are those that keep money out of the hands of the young men whose gridiron heroics fill their coffers.

Instead of warning players of the dangers or teaching safer tackling technique, players like Askin were taught and required to use their heads as battering rams. When they sustained concussions, they were kept on the field and threatened with ejection from the team and loss of their scholarships should they fail to perform.

Particularly troubling is the fact that Notre Dame is a faith-based university, that seems to have prioritized financial gain over the ideals it claims to adhere to.  According to the lawsuit the school boasts the second most valuable college football program in the world, generating $78 million in gross revenue and $46 million in profit from its football program.  So far, all they’ve offered John Askin is “prayers,” however, according to Miller.

“John has his trainer’s written records from Notre Dame, which were retrieved by his orthopedic surgeon in 1990.  Notre Dame advised him they don’t have them!  The records absolutely prove the allegations in the Complaint and his teammates will testify to these facts—as the complaint indicates,” Miller told Advocacy for Fairness in Sports.

“Notre Dame was told about everything that we have.  I did not provide it to them, because they weren’t interested in discussing a settlement with non-disclosure agreements.  As i said, all they wanted to do was to “pray” — including one member of the Board of Trustees, who has personally known John Askin all the way back to high school,” Miller said.

“I was and remain utterly disgusted that the university which holds itself out as the ‘beacon’ of religiosity that is proudly proclaimed by its President on the Notre Dame website as the ‘ethos’ which is in bold print at page 22 of the Complaint:

There are no universities that have done what Notre Dame aspires to do: to become a preeminent research University, to offer an unsurpassed undergraduate program, and to UNFUSE BOTH WITH THE RELIGIOUS AND MORAL FRAMEWORK THAT IMBUES KNOWLEDGE WITH POWER TO BENEFIT HUMAN BEINGS.

“In my opinion,” Miller says, “this ‘aspiration’ of Notre Dame President, Rev. John Jenkins C.S.C. qualifies as, little more than, an odiferous line of cow manure spreading across the entirety of America.  It’s all about the Benjamins.”

It seems noteworthy that Jack Swarbrick, Notre Dame’s Athletic Director, since 2008, seems to have been a key player in the Larry Nassar abuse cover-ups.  Indy Star reported, “that two former USA Gymnastics presidents have cited him as one of the key people involved in advising USA Gymnastics on policies related to sexual abuse, including discouraging the organization from distributing a booklet on child sex abuse to its members.”  According to the Star, “In a legal deposition, [former USA Gymnastics President Steve] Penny appeared to suggest Swarbrick was acting as more than an advisor. Penny, who became president in 2005 and resigned last year, said of sexual abuse: ‘Jack Swarbrick was legal counsel for USA Gymnastics, and so much of the activities around these types of issues was managed by our attorney, and it still is today, because the investigative process and things like that are all done through legal counsel.’”

A curious choice for a school that claims to embrace a “religious and moral framework.”  Swarbrick has been a powerbroker in amateur sports for many years, including, his role as a key player in moving NCAA headquarters from Kansas City to Indianapolis.  While the gymnastics scandal had not yet surfaced at the time of his appointment, Swarbrick seems to remain secure in his employment.

Neither the NCAA nor Notre Dame have yet filed formal responses to the allegations and have until late March to do so.  When they do, it’s likely they will claim “no duty of care,” as they have with past lawsuits.  If Askin’s allegations about the administration of prescription drugs without control are confirmed, those actions would be in violation of both federal and state laws.

It will be interesting to observe if the Kentucky state court takes a stronger stance as to the seriousness of drug law violations in sport than the federal court which has overseen the NFL painkiller lawsuits, or if the DEA might choose to become involved.  It’s also possible that the NCAA will move to have Askin’s lawsuit removed to the Northern District of Illinois where many other brain injury suits have been consolidated under Judge John Z. Lee.

While it’s likely, if the case remains in state court, that it will eventually result in a settlement, it’s important to note that it’s broken ground on the scene of making allegations involving the abuse of pain-relieving medications in the business of major college football.  Much has been reported about such illegal activity in the NFL. If discovery commences and a trial is achieved, it will become public knowledge that some of the same unethical behavior that has been widely reported regarding the NFL, has trickled into or perhaps permeated the collegiate ranks of the sport as well.

Permanent link to this article: https://advocacyforfairnessinsports.org/current-litigation/current-ncaa-cases/askin-v-notre-dame-ncaa/john-askin-lawsuit-adds-a-new-layer-to-college-football-misconduct/