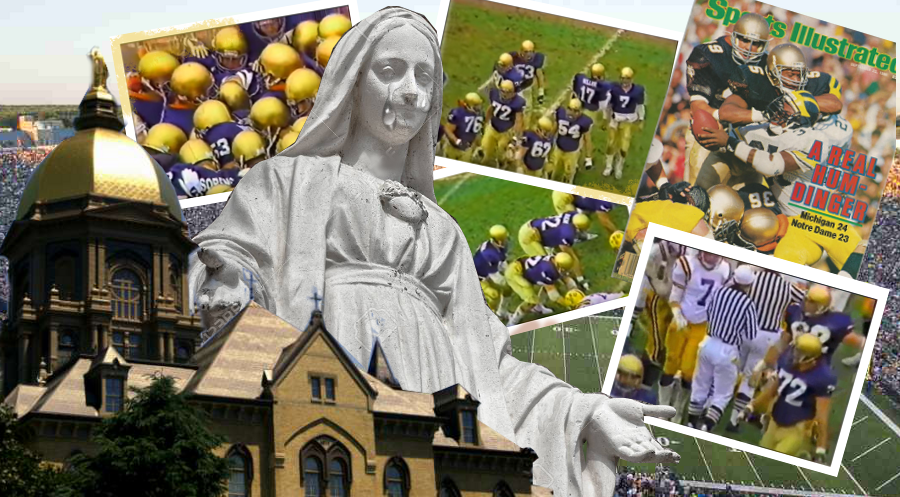 John Askin once wore number 72 for the Fighting Irish.  Now he’s fighting the school and the NCAA for his brain.  We first reported on the lawsuit in February shortly after the former linebacker filed in Jefferson Circuit Court, in Kentucky, his state of residence after months of attempted negotiations with the school seeking compensation for his latent brain injuries. 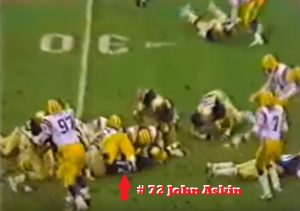 In his lawsuit, Askin asserts that coaches taught players to use their heads and helmets as weapons.  He suffered four known concussions and countless mTBI sub-concussive impacts, and as a 6’ 7”, 275-pound lineman, he was one of the largest players on the team and found himself in the thick of the action and at the bottom of tackle piles in dozens of situations in both games and practices throughout his college career.

Askin alleges in the lawsuit that not only did the coaching and training staff at Notre Dame encourage weaponizing the head, and treated concussions as inconsequential, they exacerbated the effects of the concussions through their illegal use of drugs administered to the players.  One drug of choice was Supac, a “super-aspirin” as Miller described it, which thinned the blood as aspirin does, and encourages brain-bleed when concussions are sustained.

In addition to Supac to mask pain and amphetamines to energize the players and give them an inflated feeling on invincibility, Askin was injected with Marcain, an anesthetic injected into patients during surgery, and Kenalog, a steroid known for multiple side-effects.  Another popular drug in use during Askin’s time at Notre Dame was a veterinary analgesic cream commonly used on racehorses but not approved for human use.

During the first four years Askin was at Notre Dame, Gerry Faust was the head coach and under constant pressure to build the team back into a winning institution, but he struggled to keep the W column greater than the L column and was replaced by Lou Holtz during John’s senior year.  Under Holtz, wins increased along with a culture of abuse as is chronicled in the 1993 book by Don Yeager and Douglas S. Looney, “Under the Tarnished Dome.”  Numerous players were quoted in the book, including Askin, who called Holtz a hypocrite because he “would never stand for people to treat him like he treats others,” and also said that he got that Holtz was an authoritarian, “We needed that,” he said, “but we didn’t need an abuser.”

Despite this, Askin was quick to point out that his criticism was directed at Holtz and not the school, as he maintained close ties to it in the years that followed his graduation, including friendships with some of the trustees—another reason Askin hoped to avoid a lawsuit.

Askin was forced out of the workplace in 2005 due to orthopedic disabilities, that were also a result of his football play, but didn’t have problems with his brain until years later.  In fact, it was more than 30 years after his football career ended that he began experiencing headaches and various other neurological symptoms which sent him searching for answers.  On February 15, 2018, a brain scan revealed white matter throughout his frontal lobe which doctors attributed to his football play.  As a devout Catholic and man of faith, Askin approached the faith-based institution he attended to seek help for his growing medical expense but they didn’t walk the walk when it came to Christian charity.  After months of attempted talks, Askin was forced to file a lawsuit in order to beat Kentucky’s one-year statute of limitations for injury claims.

Both Notre Dame and the NCAA have now filed motions to dismiss his case with arguments denying the latent nature of his injuries and asserting that the statute of limitations expired in 1987, a year after his time at Notre Dame ended rather than when he was diagnosed with neurological disease.  The following paragraph from the Notre Dame motion basically encapsulates the argument repeatedly pushed in their 40-page brief. 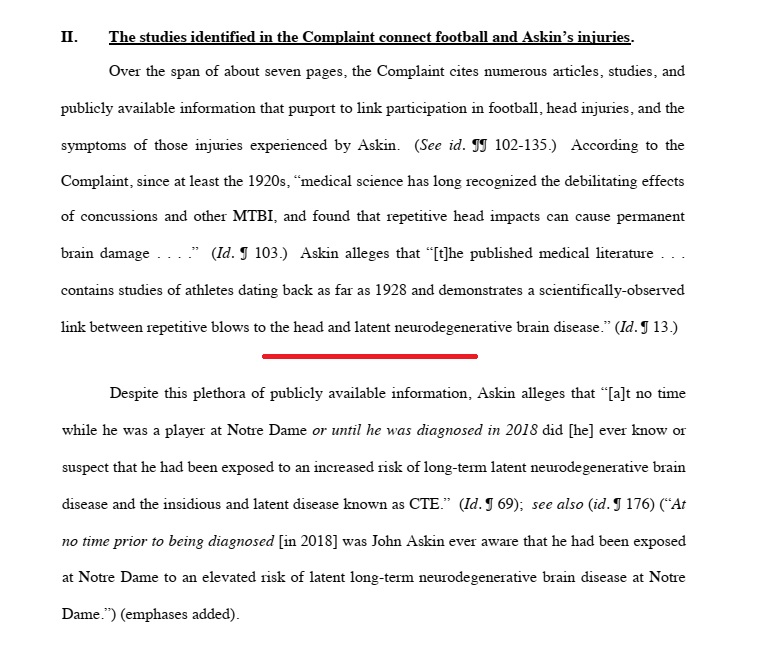 The absurdity of this argument can’t be overstated.  Under this premise, a 22-year-old kid should have the same constructive knowledge as the school and athletic association that knowingly placed him at risk.  Never mind that the NCAA was initially established because of football deaths with a directive to ensure athlete safety—a directive they abandoned long ago choosing profit over the disposable athletes who run through their supply chain year after year.  Never mind that in the 1980s when Askin played, they publicly proclaimed their commitment to the wellbeing of student-athletes.  At the time, Askin had no reason to suspect that he and his brain were mere disposable commodities to them.

Under Notre Dame’s premise, every living human would have to research everything they do or come in contact with every day of their lives in order to preserve any rights against those who flaunt their superior knowledge over those who trust them to act legally and ethically.

J. Bruce Miller, John Askin’s long-time attorney, who first represented him in a successful lawsuit against Nationwide insurance in 1995 in which they tackled discrimination against African Americans and lower-income whites through Nationwide’s redlining practices, has enlisted extra firepower bringing in David Langfitt as co-counsel. Langfitt has substantial experience in litigating brain injury cases, notably, in his representation of numerous players in the NFL concussion settlement, and most recently a victory at the Ohio Supreme Court in Steven Schmitz v Notre Dame, another brain injury lawsuit against the same defendants Askin accuses. In Schmitz, the defendants argued as here, against recognition of latent brain injury triggered by football concussions and claimed it was instead aggravation of a prior injury.  You can view the Schmitz oral arguments here.

Notre Dame relies on Kentucky case law in Caudill v Arnett in which the plaintiff incurred an injury that worsened with time with the court holding that the statute of limitations began at the time of the bus accident. 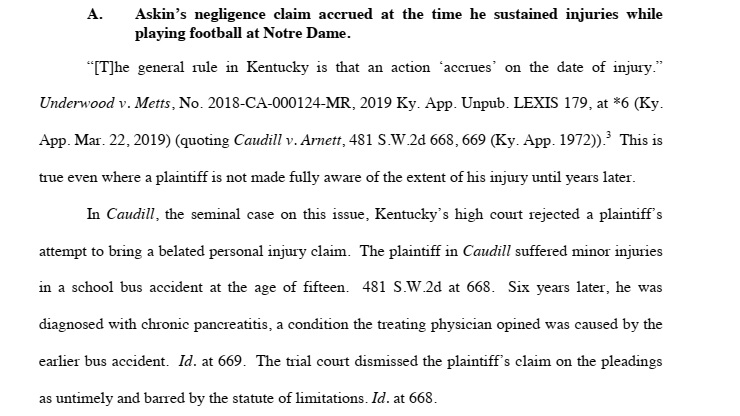 Other courts, including Ohio, have recognized that brain disease such as Alzheimer’s Disease and CTE are separate injuries from the concussions which players incurred during their football careers—a fact schools like Notre Dame and the NCAA are reluctant to acknowledge.

Notre Dame argues that in Kentucky, the discovery rule only applies to toxic tort cases.

As in Ohio, because of the relatively new public knowledge about brain injury risk, Askin’s claim will be one of first impression, however, as Askin points out in his reply brief that, courts have consistently ruled that CTE is a latent disease like mesothelioma, and as such, the discovery rule is applicable.

Through Miller he points out that it took more than 30 years for neurodegenerative disease to manifest and just as a diagnosis for asbestosis is not barred by time because mesothelioma is a separate and new disease, the fact that Askin suffered from concussions does not bar him from pursuing recompense for development of a separate and distinct neurological disease.

Defendants say that Askin should have filed his lawsuit in 1987 when he was well.

The filing of a lawsuit at that time would have been absurd.  There was no claim to pursue.  Askin was leading a normal, productive life.  Under the NCAA’s reasoning, every college athlete would need to file a lawsuit against his school because the concussions he sustained put him at risk of developing neurodegenerative disease.  While I’m unaware of an accurate study for the prevalence of CTE in college football players, a recent study in Neurology by Zachary O. Binney and Kathleen Bachynski shows that at minimum ten percent of NFL players will develop CTE with up to thirty percent as a distinct possibility.  If numbers are similar for college players, then between 70 and 90 percent will never develop latent brain disease and will never have a cause of action to pursue.  There is no way of knowing within one year of the end of football play who will be safe and who will develop disease or in other words, who will have a cause of action and who will not.

I’m certain that the schools and NCAA would prefer to eliminate their liability in this manner, but the argument is both callus and without logic.  Hopefully, the Kentucky court will see the folly of the defendants’ arguments and recognize that situations such as Askin’s are why the discovery rule exists.

Miller said in an interview with Advocacy for Fairness in Sports that he has evidence to back up every allegation.  While Notre Dame claims to have destroyed older medical records when they digitized, John Askin’s mother is one of those moms known to save everything when it comes to her children, and as such, she has a very thorough record.  Additionally, many of Askin’s teammates are still alive and in good health and have expressed willingness to testify as to their recollections.

Schmitz is scheduled for trial beginning October 10 of next year.  Assuming the schedule sticks, hopefully, Langfitt will have a strong win that will support a positive outcome for Askin.

Last year, the widow of Greg Ploetz took her CTE case to trial in Texas and after three days of damning testimony, the defendants settled to prevent further damage to their brands.  The same could occur in Schmitz and also with Askin, but eventually, the NCAA and its member schools will have to stop running, face the music and finish the dance.  When this occurs, one of the cornerstones of amateurism which the NCAA has created to enrich itself and pretty much everyone except the athletes who put their bodies and brains on the line should crumble, hopefully paving the way for greater accountability and more athlete-centric sports.

Advocacy for Fairness in Sports is a nonprofit dedicated to investigative sports journalism. Please help us to continue bringing the stories that no one else is reporting by making a small contribution toward our operating costs. Court documents aren’t free, and you can be a difference maker by helping us to meet the expenses necessary to remain ad-free and provide the coverage you’ve come to expect over the past three years.

Permanent link to this article: https://advocacyforfairnessinsports.org/current-litigation/current-ncaa-cases/askin-v-notre-dame-ncaa/notre-dame-ncaa-motions-to-dismiss-askin/