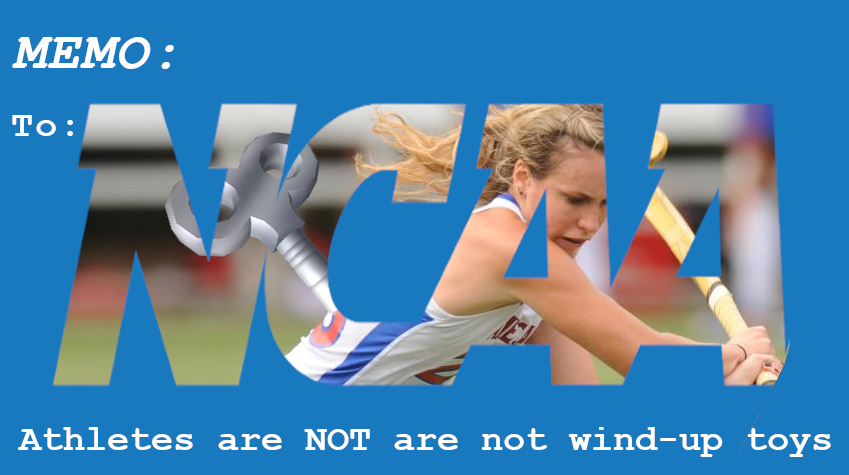 Yet again, the NCAA has taken the stance in court that it has no legal responsibility to actually enforce its own rules in regard to player healthcare and safety. Yet again, the party who received the harm in this situation is an athlete that the NCAA purports to advocate for.

Jennifer Bradley played field hockey for American University in Washington, D.C. from 2009-2012 on scholarship. In a complaint against the NCAA et al, she states that on or about Sept. 23, 2011, she received a hit in the head with a stick during the course of a game. Bradley states that the hit wasn’t abnormal compared to the normal course of activity in the sport but after the contest, she started experiencing symptoms of a concussion.

Bradley’s brief states she informed her head coach and the head trainer at American on Oct. 1 of her symptoms. The next day, she took part in another game. On Oct. 3, she sent an email to the training staff putting her symptoms into greater detail. Training staff conducted two tests on Bradley over the following two days. On both occasions, Bradley’s results deviated from the baseline significantly. Despite that and her continued complaints about her symptoms, she played in five of the team’s next six games. Bradley also practiced and played in the Patriot League postseason tournament in 2011 as well.

Upon her return to her home of Pennsylvania, Bradley was treated by her primary care physician for her continued symptoms. She was diagnosed with post-concussive syndrome and was referred to a neuropsychologist. Because of the symptoms and the treatment of her condition, Bradley was unable to finish her degree track at American. Her symptoms and treatments continue to this day. Bradley states that they have significantly hampered her ability to continue her education and maintain employment.

In April of 2014, Bradley brought her complaint against the NCAA, the Patriot League, American University, Maryland Sports Medicine Center, David Higgins and the United States of America. In February of 2016, the D.C. federal district court dismissed the complaint and remanded it to the D.C. Superior Court. Bradley then amended her complaint and re-filed in that court, prompting motions for dismissal and summary judgment from the NCAA and the federal government. The motion to dismiss was denied in part and granted in part in April of 2017.

The court found that Bradley’s facts were sufficient to establish a claim of negligence against the NCAA. However, the court dismissed claims of gross negligence because that isn’t a stand-alone claim in D.C. The court similarly found Bradley’s facts inadequate to substantiate claims of negligent emotional distress, fraudulent misrepresentation, breach of contract and medical malpractice.

All of the charges against the Patriot League were dismissed as well. While the court allowed the medical malpractice and negligence claims against American University to stand, while the others were dismissed. On December 4, the NCAA asked the court to dismiss the remaining charge against it.

In its petition for summary judgment, the NCAA states that it can’t be negligent in its duty to Bradley because it has no duty to Bradley. The relationship is between itself and American University, not the athletes at American. This is a convenient cherry-picking that hopefully will not prove effective for the NCAA before the court.

The reality of the situation is that the NCAA has a very tangible relationship with athletes at its member institutions. That covers a large array of facets of intercollegiate sport, including player health and safety.

Before any athletes can compete in NCAA-sanctioned events, the NCAA requires them to have personal health coverage. That requirement doesn’t mandate that member institutions cover their athletes, but rather it’s a mandate placed directly upon athletes themselves by the NCAA. The NCAA also has a catastrophic policy that covers athletes in all of its events. Again, the NCAA hasn’t taken out that policy to cover medical costs for member institutions, but athletes themselves.

While the NCAA is correct that its by-laws for concussion protocols are for member institutions, not athletes, the NCAA in doing so admits that it has failed its duty of oversight regarding those regulations. In its argument that the NCAA has no duty to ensure that its members follow their own concussion protocols, it called upon precedent established in Lanni v. NCAA. In that case, however, the plaintiff was a spectator at an NCAA-sanctioned event, not an athlete participating in such an event. That highlights the absurdity of the NCAA’s conduct in this case and again reveals how the NCAA is nothing more than an illegal cartel whose sole purpose is to allow its members to collude together to fix prices for athlete labor.

Had Bradley received cash for her labor or for putting her face and name in university marketing materials, it’s highly unlikely that the NCAA would have a similar hands-off approach. That the NCAA would similarly be absent and assert that it has no duty to athletes to ensure that “amateurism” rules are enforced by its members is impossible to imagine. It’s more probable that the NCAA would have not only ruled Bradley ineligible to participate in the events it sanctions because of that but also forced American to vacate wins, reduced scholarships and placed show-cause restraints on the coaches at American. It’s very telling about the current state of college athletics that athletes are more likely to see the field of play after being concussed than they are when a former high school coach aids their parents with moving expenses.

The NCAA’s continued treatment of athletes as chattel goes beyond simple intellectual property and wage theft. It leaves athletes like Bradley bereft of their dignity and ability to successfully contribute to society as well. We are all worse off for missing out on the contributions athletes like Bradley could make if not for their cognitive limitations.

Permanent link to this article: https://advocacyforfairnessinsports.org/current-litigation/current-ncaa-cases/jennifer-bradley-v-ncaa/jennifer-bradleys-case-highlights-the-ncaas-cherry-picking/