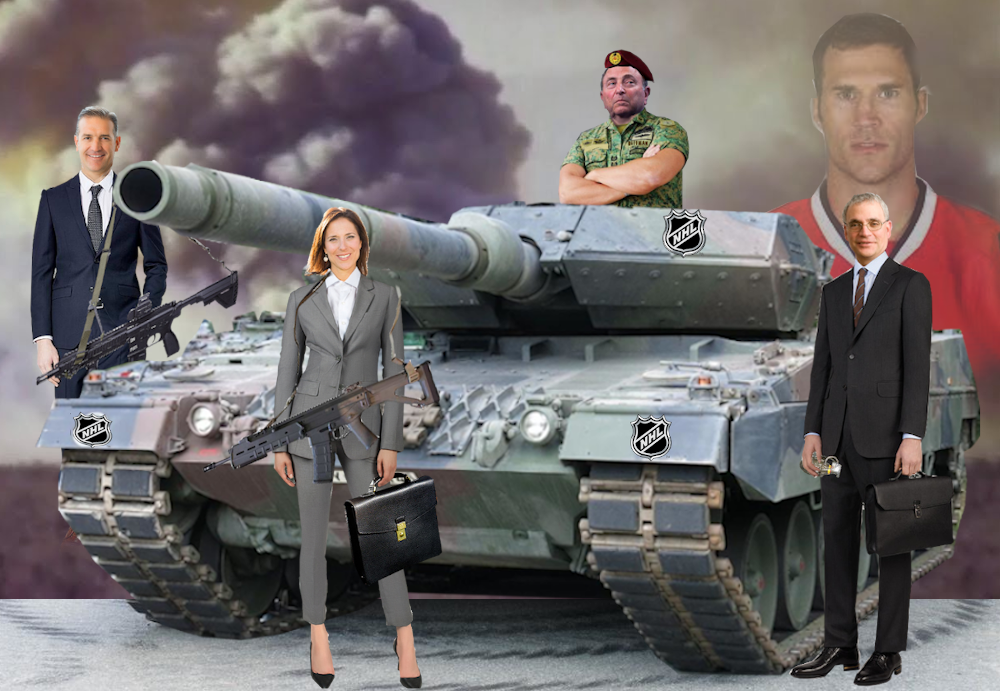 The end of the NHL concussion litigation may be in sight, at least as it pertains to three of the members of a proposed class of former players that sued the league for damages related to head injuries and opted out of an earlier settlement. The NHL has asked the federal court in the Northern District of Illinois to consolidate the complaints of Daniel “Carbomb” Carcillo and Nick Boynton with the estate of the late Steven Montador and also made a motion for dismissal of the claims. Comparing those pleadings with what we already know about how the NHL operates in regards to head injuries produces some interesting inconsistencies that are convenient for the league.

063 000 NHL Memorandum in Support of Motion to Dismiss (Text)

The first count of the NHL’s motion to dismiss is pretty standard. The argument is Section 301 prevents the court from considering any of the plaintiffs’ claims because all the allegations are covered by the collective bargaining agreements that Montador played under. The NHL’s arguments that the claims for relief are insufficient are more complicated, however.

Keeping with its theme throughout this litigation, the NHL repeats its talking points that the NHL has no duty to study head injuries and even if it did, the law does not require the league to disclose the results of such research to NHL players. Furthermore, the NHL alleges that it has made no statements regarding the safety of its brand of ice hockey that the plaintiff has shown to be false.

From there, the NHL goes “scorched Earth.” The league states that if its promotion of its primary product, ice hockey games, is promoting violence as the Montador estate suggests, then that speech is protected by the First Amendment to the United States Constitution. The merits of that argument largely depend on the court’s view of whether restricting the speech would represent viewpoint discrimination. In R.A.V. vs. St. Paul, the US Supreme Court ruled that the First Amendment protects speech intended to promote violence if the removal of that protection would amount to such censorship.

The NHL’s next argument expounds further upon that idea. Similar to its argument that the NHL had no duty to supply players with information relevant to the effects of head injuries, the NHL also states it has no duty to not promote violence. Within a few pages, the NHL moves its position on the promotion of its game from a promoter whose salesmanship of a violent form of entertainment is a First Amendment right to an oblivious bystander while any carnage was ongoing. The following argument says that the Montador estate’s claims fail to prove Montador’s injuries and death were the results of the league’s promotion. Most interestingly, the league contradicts itself in its final pleading.

While the NHL still contends that the CBA and federal law supersede Illinois law in regards to the plaintiffs’ claims, Illinois workers’ compensation law also precludes the claims because that bars any recovery by an employee against an employer in regards to on-the-job injuries. In this claim, we see the NHL shirking any responsibilities that federal law places upon employers in regards to providing employees with adequate safety information but picking that mantle back up under Illinois law when convenient.

While none of those arguments in the NHL’s motion to dismiss are that unexpected, one twist has emerged in the case that previously has received little attention. In a declaration to support the NHL’s petition for dismissal, the NHL’s Executive Vice President of Deputy General Counsel Julie Grand presented three documents for the court’s consideration. The first two are the texts of the two CBAs that governed the league during Montador’s career. The third is a new wrinkle not only in this case but the general public understanding of the league’s handling of concussion protocol.

The document is entitled, “NHL/NHLPA Concussion Program Authorization and Consent.” The document was signed by Montador on Sept. 16, 2011. It is mostly a release form, giving various bodies in the NHL certain privileges to share healthcare information that would normally be barred by HIPAA. There is some information on how the NHL’s concussion protocol works in this document.

The document says that players take baseline tests, called the NHL SCAT2, to provide markers for their normal cognitive function. When a player is diagnosed with a concussion by a team physician, information pertinent to his diagnosis is entered into a league-wide system. Once that information goes into the system, the NHL’s Production department pulls video from the moment(s) in the game(s) when the injury/injuries occurred. Such clips become part of the players’ medical records. While treatment is ongoing, further NHL SCAT2 tests are administered to determine readiness to return to work. All of this information is merged into one database that is shared by the league and the players association so it has up to date statistics on the number of concussions diagnosed by team physicians, games missed by players and success of test results. The document makes clear that except for video clips, player names are not attached to any of the information in the database.

While the release of injury-related information is pretty standard across the board in regards to on-the-job injuries, the existence of a concussion protocol that tracks so closely players’ downtime and test results is peculiar for a league whose official stance in the course of defending against litigation on this very subject equates to climate-change-level denial. The NHL denies that there is any correlation, much less causation, between its brand of ice hockey and any neurological disorder. The aforementioned scorched Earth tactic applies here as well. The NHL goes a step further to contend that one particular disease, chronic traumatic encephalopathy or CTE, is an illegitimate diagnosis.

Based on this information, several questions should become relevant to fans. If the NHL has no legal duty to study concussions (as it alleges in its motion to dismiss Montador) and it genuinely believes that no traumatic brain injuries can result from being employed by one of its franchises as a player, then why is it spending the resources it is to record, share and track information relevant to head injuries? Furthermore, why then is it so important to the league to have video evidence of these injuries stored in perpetuity, if any serious and sustained symptoms of a TBI cannot be attributed to such employment? Finally, if long-term symptoms experienced by players are because of some genetic predisposition or failure on the players’ part to adequately follow best practices in recovery from a concussion, then why is the NHL lumping all the players given a concussion diagnosis in one pool?

This highlights again how the NHL plays by different rules when convenient. Collecting all this information acts as a “CYA” (Cover Your Ass) device for the league and perhaps in future cases, the PA as well. If its arguments that it had no duty to research head injuries among its athlete employees ever fail, it can then argue it has been doing so. While the most obvious framing of the existence of the concussion protocol is as a concession to the PA in CBA negotiations, that is a long distance to bridge. Are fans to believe that in labor negotiations the NHL essentially said, “we don’t believe any of these injuries can lead to anything negative long-term but we’ll spend all this money and create this extra work for our employees anyway just to satisfy you?” That’s a hard pill to swallow. The more plausible explanation is that the NHL’s legal arguments are so ridiculous that the league isn’t actually conducting itself in accordance with them.

The theme of the NHL’s convenient flexibility extends to the other motion it has made before the court, the consolidation. Although the plaintiffs have not opposed this motion, it still represents an inconsistency between how the NHL operates on a day-to-day basis and its legal positions in regards to head injuries. If the symptoms that Carcillo and Montador present with are indeed unrelated to their former employment with NHL franchises, how can the NHL treat what should be highly individualistic cases as one affair?

The NHL’s determination to avoid all liability for neurological disease suffered by former players has forced it to attempt logical gymnastics that defy both belief and science. The NHL is a league that privately collects a comprehensive suite of data regarding head injuries while publicly declaring that data insignificant. That has led the league to treat players like Carcillo, Boynton and Montador as insignificant as well.

Update: On January 30, Judge Lee denied the motion to transfer.  The case will proceed under Judge Lee, separate from the Carcillo and Boynton lawsuit.  The parties have been ordered to coordinate on a discovery schedule.