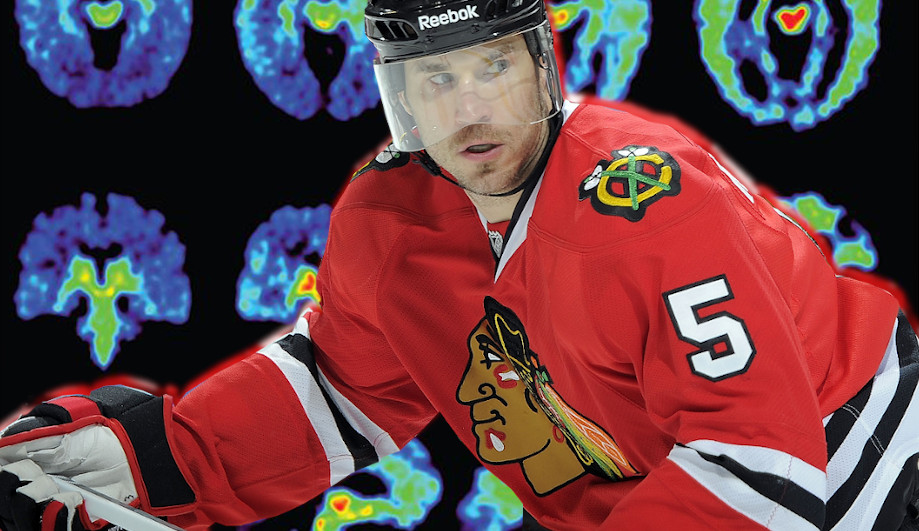 On Oct. 25, the Montador estate filed its complaint with the Circuit Court of Cook County, Ill. It demands a trial by jury and alleges four counts against the league and its Board of Governors. Those counts are:

The basis for the estate’s claims against the NHL

The complaint begins with establishing the facts of the situation when it came to Steve’s career in the NHL and the circumstances around his death. The lawsuit claims he took part in 69 on-ice fistfights and sustained “thousands of sub-concussive brain traumas and multiple concussions” during his 614 career games spanning 14 seasons.

After his retirement from the NHL in 2013, the complaint states that he began displaying classic symptoms of the neurological disease chronic traumatic encephalopathy (CTE). On Feb. 15, 2015, he passed away at the age of 35.

The lawsuit reveals that a review of Steve’s brain post-mortem confirmed the CTE diagnosis and that the disease at least played a role in his early death. The next section of the complaint details why the defendants are liable for Steve’s death and symptoms.

The lawsuit states the NHL and its BOG “have the ultimate authority to establish and determine the playing rules and policies of NHL hockey and the environment in which the game is played.” The claims allege the NHL not only failed to provide safe working conditions for Steve but also willfully misled him on the dangers of his employment.

Finally, the complaint states that the NHL promoted the violence that led to Steve’s development of CTE despite having information that such conduct was detrimental to workers’ health. Like in any other civil matter, the onus will be on the estate to prove its claims.

Because the estate has already been through much of this same ordeal on the federal level, that action can lend some insight into what the NHL’s response might be. It’s fair to expect more double talk out of a league that consistently puts profits over people.

Old arguments that the NHL might dust off soon

When the NHL successfully moved to dismiss the estate’s first complaint last year, it relied on preemption and lack of standing. Perhaps the most important thing for NHL fans to note at this juncture is that the NHL has not yet had to actually defend its player safety rules or communication with players in this context in a court of law. To date, it’s been able to successfully dismiss such claims or settle such complaints out of court.

The axiom of if it isn’t broke, don’t fix it, could apply here. There might be some adjustments, however, due to the fact that the NHL was unable to convince Judge Lee to bar the suit’s progress to this point. Still, the overarching arguments could be quite similar.

The NHL’s main arguments were that the terms of the collective bargaining agreements that Steve played under alleviate the league’s liability in this case. Essentially, Steve knew what he was signing up for, willingly put himself in harm’s way, and the league fulfilled all of the obligations due him under the terms of those agreements.

Secondly, the NHL claimed that even if the court is unwilling to accept that premise, the estate has no ground to bring these claims against the league because it has broken no law. The league argued that under Ill. law it has no duty to share information it has gathered about the effects of head injuries with workers and that the plaintiffs cannot prove any information about the risks of playing in the league it did share with Steve to be false.

The individual claims of the estate’s complaint set up responses to those exact arguments. They also point out how the NHL uses both sides of an argument when convenient.

The NHL’s selective abdication and fulfillment of safety provisions

The complaint lays out how from 1997 through 2004, the NHL says it studied the “frequency, timing, duration of symptoms, and mechanism of injury patterns for concussive brain traumas sustained by NHL players.” The lawsuit alleges that during the study period, the NHL confirmed a “duty to analyze all issues related to brain trauma in the NHL.”

On multiple occasions, NHL representatives have pointed to that action as a sign that the league has “led the way” on player safety in this regard. For example, this was the current NHL Commissioner in September of 2011:

“We are the first league that has had a protocol for the diagnosis and return-to-play decisions,” Bettman said. “We are the first sports league to do baseline testing with respect to concussions and this is just another in a series of steps.”

Amidst that spin, the NHL largely withheld the data and the result of the study from Steve and his co-workers. There was one set of results published in 2011 which documented the reports of team physicians on the matter. Other than that, the NHL reserved its findings until 2018, when it could weaponize them against the aforementioned class-action lawsuit.

Instead of providing players with the information crucial to deciding how to best perform their jobs safely, the NHL presented an incomplete and league-friendly version of the data. Meanwhile, expert witnesses employed by the NHL argued that CTE wasn’t a legitimate diagnosis and criticized competing studies.

The questions the Montador estate and many fans might have included, if the league believed it had no duty to look into workers’ risks in this context, are we to believe the league simply did so honestly out of the “goodness of its heart?” Or rather, was it a concession made to the players’ union and an attempt to control the narrative as others were also doing research around the same topic?

The NHL’s attempts to skew the available knowledge about playing in its league and the development of neurological disease are well-documented. In 2017, researchers at Boston University won a legal dispute blocking the league’s interference in the study. The NHL also refused to fund any research it could not control. Such motives throw the legitimacy of the league’s own research and convenient findings into doubt.

Furthermore, the fact that the NHL shared no information with Steve that was demonstrably false does not mean the league did not withhold material information from him. Deception by omission is still deception.

The NHL is only too happy to paint itself as a leader on neurological health to the public while simultaneously promoting behaviors that undermine such health for its own profit and depriving workers of the very information it says it is gathering regarding their well-being. In the case of Steve Montador, those decisions undoubtedly played a part in his early death. Now, his estate seeks justice in Chicago, the same city where Steve endured many of those unnecessary injuries.