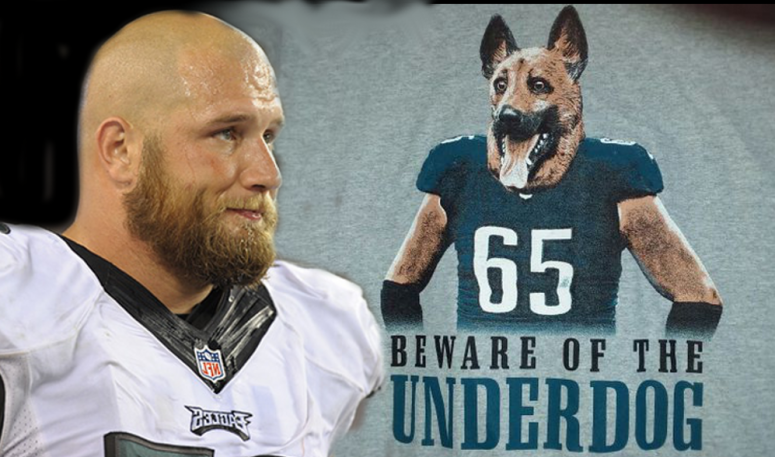 Beware of the Underdog!  Lane Johnson’s underdog persona served him well in Super Bowl LII.  Now he’ll be putting it to the test in his quest to sack the NFLPA.

Unions are tough to sue.  After two years of litigation seeking to overturn his PED arbitration that resulted in a ten-game suspension, on October 3, Judge Richard Sullivan of the U.S. District Court for the Southern District of New York, trimmed his multi-cause complaint down to a single count.  The one claim which survived the judge’s scrutiny was a LMRDA claim in which he asserted that his union was required to provide him with a copy of the current collective bargaining agreement as well as any documents modifying or amending the agreement.  Both in violation of the CBA and Section 104 of the Labor Management Reporting and Disclosure Act, the NFLPA refused to provide Johnson with the documents.

In a joint status letter filed October 18, Johnson, the NFLPA, and the NFL who was also party to the lawsuit stated their intent moving forward.

Johnson requests a scheduling order including a deadline for the NFLPA to finally address his First Amended Complaint.  He also seeks a jury trial on the LMRDA claim and the NFLPA’s retaliation against him and discovery on the same.

The NFLPA, on the other hand, seeks to moot Johnson’s claim, finally relinquishing some of the contested documents.

He points out the discrepancies in the partial documents provided by the NFLPA and their representation to the court,  asserting “the NFLPA still has not provided Johnson the entirety of the subject collective bargaining agreement.”  He points out that the LMRDA requires a union to provide a written statement of CBA terms modified in writing or orally and states that he has received nothing to address the deviance from the two-year provision defining the reasonable cause testing period for a PED offense.

The NFLPA says that it cannot produce this document because it doesn’t exist. 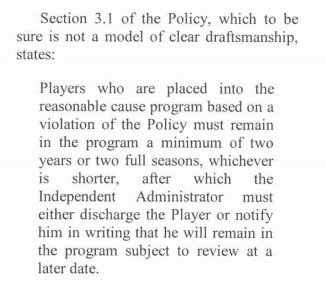 While Judge Sullivan didn’t find the handling of Johnson’s lack of removal from reasonable cause testing problematic since apparently all players are subjected to the same rule, he did note that the policy is “not a model of clear draftsmanship.”

Whether the handling of Johnson’s removal was perceived by Judge Sullivan as arbitrary—or not, it seems problematic that the union does not have a clear policy in place for adding and removing players from reasonable cause and random testing.  That would seem to make the determination arbitrary for every player who finds himself headed for the reasonable cause list with no clear indication of when his name will be removed.

On behalf of Johnson, attorney Steve Zashin writes, “the NFLPA cannot moot Johnson’s LMRDA claim or limit his relief under the LMRDA by providing him additional, previously non-disclosed information now, nearly two years after he filed this action…Such an impractical conclusion would serve only to encourage union misconduct.”

Johnson then turns his attention to the NFL defendants.

As stated, while he disagrees with the outcome of his motion to vacate his suspension, he concedes that the court has left that avenue closed, thus ending his disagreement with the NFL.  As not to prejudice his claims against the union, however, rather than seeking dismissal of certain claims himself, the NFL should file a motion to dismiss his claims against the league.  The NFL seems to concur.

While as the expected adversary, the NFL should have been, but never was the primary defendant in Lane Johnson’s lawsuit.  Instead, through a series of actions Johnson views as indifference, betrayal, and retaliation on the part of the union pledged to protect him, the NFLPA has always been the primary focus of Johnson’s case.

Johnson now seeks discovery as to NFLPA retaliation against him, and his attorney points to the fact that the union agreed that discovery would proceed if his LMRDA claim survived the motion to dismiss.

Hopefully, Judge Sullivan will allow discovery to proceed at this juncture.  Here’s how he addressed Johnson’s collusion and retaliation claims in his written opinion. 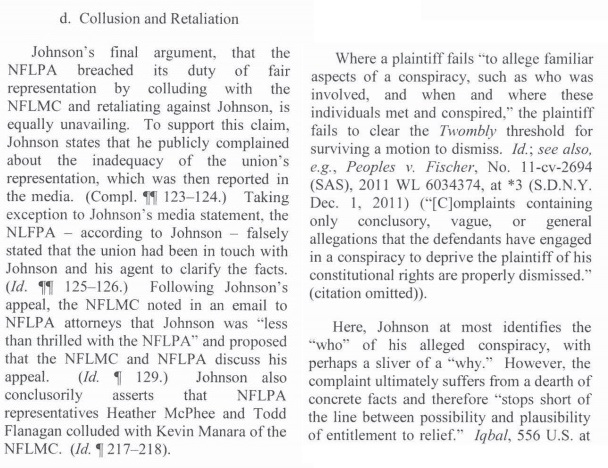 Judge Sullivan appeared to weigh these claims primarily in regard to whether the arbitration decision should be vacated. That’s now off the table, as Johnson seeks redress for the LMRDA cause of action, and retaliation seems to be relevant as to why Johnson was never provided with the documents promised through his CBA until after all counts were dismissed save the LMRDA charge of failure to provide documents.

In Judge Sullivan’s opinion, he wrote, “Where a plaintiff fails ‘to allege familiar aspects of a conspiracy such as who was involved and where these individuals met and conspired,’ the plaintiff fails to clear the Twombly threshold for surviving a motion to dismiss…Here Johnson at most identifies the ‘who’ of his alleged conspiracy, with perhaps a sliver of a ‘why.’  However, the complaint ultimately suffers from a dearth of concrete facts and therefore ‘stops short of the line between possibility and plausibility…”

Generally, discovery is required to unearth details surrounding conspiracy and, in this instance, likely retaliation.  Judge Sullivan conceded that Johnson had provided the court with a “who” and “perhaps a sliver of a ‘why’.”  Perhaps now Johnson will have the opportunity to enlarge the “sliver” through discovery.  This seems especially relevant in getting deeper into the “why” of the LMRDA violation.

What initially appeared to be a severely weakened case because of the dismissal of all but one count now takes on a new dynamic.

The NFL and NFLPA are natural adversaries. Will the NFL become an ally to Johnson in the vein of “the enemy of your enemy is your friend” or will they assume an adversarial position against both Johnson and the union?  Or will they ally themselves with their usual adversary to cover potential misdeeds of collaboration or collusion with the NFLPA?

If Johnson receives the discovery he seeks it may not matter.  Rank and file have long alleged the union favors the star players, and while many would count Johnson among the stars of the game, perhaps critical stars don’t receive the “star treatment” of others whom the PA has represented in a high-profile manner.  Whatever happened to Mike Neal?  In case you’re trying to place Mr. Neal, he was one of the NFL players accused in 2016 of using PEDs in an Al Jazeera documentary, along with Peyton Manning, Clay Matthews, Julius Peppers, and James Harrison.  Having retired, Manning “fully cooperated” with the NFL’s investigation and all accusations against him were quickly swept aside as the NFL made aggressive demands against Matthews, Peppers, Harrison, and Neal.  Encouraged by the NFLPA, the four players stood their ground against the NFL’s invasive bullying until they were threatened with indefinite suspensions should they fail to comply with all the league’s demands.

At that point, Matthews, Peppers, and Harrison, who were signed with teams, backed down and made their appointments with Roger Goodell.  Free agent Mike Neal was the sole player to hold out on the league’s demands and appears to have paid a steep price.  Though he agreed to meet with Goodell two days after the other players, who were quickly exonerated, no mention was made of Neal aside from a side note that his investigation was continuing.  Where was the union that so aggressively urged the players to take a stand?  Crickets.  I did an investigation to find out whatever became of Neal but ran mostly into dead ends.  Neither the NFL nor NFLPA would comment as to his status but working back-channels I was informed that he had been 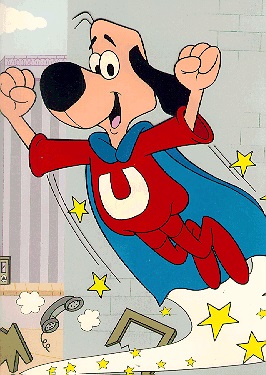 through two hearings “represented” by NFLPA counsel Heather McPhee.  My source used the quotation marks around the word represented.  Neal was suspended shortly after the second hearing never to be seen in the league again.  Where was the NFLPA?

The consensus seems to be that Mr. Neal wasn’t important enough to put up a costly fight for, and therefore he became a defenseless scapegoat for his defiance of the NFL.

Despite his star-power, Lane Johnson is the underdog in his case against a much more powerful entity but I’m not counting him out.  Johnson has both the fight instinct to get the job done and a fierce advocate in his attorney Steve Zashin.

Johnson and his team embraced their underdog status in Super Bowl LII and it worked out pretty well for them.  Perhaps his next victory parade will take place in New York City, from a courtroom typically adversarial to NFL players. Stranger things have happened.  Unlike the Super Bowl when I saw two of my favorite teams pitted against each other, in this game, I’m definitely cheering for the Underdog!

UPDATE October 23, 2018:
Addition briefing letters have been filed in Johnson’s quest for accountability. NFLPA complains of having too little time to prepare for Johnson’s continued fight, as they continue to urge the judge to moot the remainder of his case. Johnson strikes back illustrating the irony in this argument as he is still waiting for the NFLPA to provide the entirety of documents relating to his CBA. Included in Johnson’s filing is a transcript from the Mike Pennel hearing in which the Judge was very concerned about the NFLPA’s shortcuts and “gentlemen’s agreements.” Please expand the tweet thread for details.

THREAD:
Saturday I published an update on Lane Johnson’s lawsuit against the #NFLPA.
Yesterday I published a story on some dueling briefs in the lawsuit filed by the daughter of #AaronHernandez v NFL. I now update you on dueling letters between the NFLPA and Lane Johnson

Permanent link to this article: https://advocacyforfairnessinsports.org/current-litigation/lane-johnson-v-nflpa-nfl/underdog-lane-johnson/