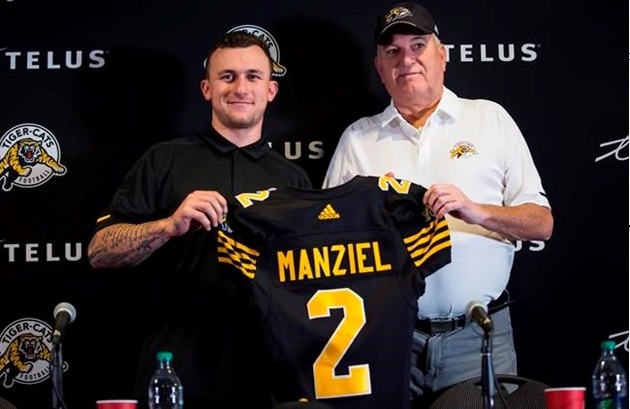 Manson is mercifully gone now, but when it comes to the Canadian Football League, his selected wit and wisdom would appear to be very much alive.  Last week will surely go down as one of the most nonsensical occurrences in recent CFL history.

Along with continued denial by the league on the now recognized connection between football concussions and CTE, the CFL Alumni Association’s corresponding indifference/denial of CTE as well as very lame financial attention to former players in poor health related situations requiring aid, the CFL now welcomes a former NFL washout, Johnny Manziel, who has purported mental health issues, a history of substance abuse as well as a conviction for violence against a woman.

Like a crash on a freeway, the Canadian media has eyes locked on to the continuing adventures of new CFL recruit “Johnny Football”, former NFL first round draft pick and complete bust with the Cleveland Browns, out of football for 3 years, but heartily welcomed in Canada by the Hamilton Tiger-Cats.

The Canadian Press, which covers the CFL extensively except not so much for concussions and CTE, made sure they were at Manziel’s first practice and that Manziel’s new Tiger-Cat team sold “about 24” Manziel game sweaters after his signing. Bucks before brains, it would appear.

Along with the concussion and CTE issue which bizarrely continues to be denied by the CFL, the league now can be seen as welcoming a domestic violence offender in Manziel, which along with last year’s aborted hiring and firing of former Baylor head coach Art Briles in the space of 12 hours, also by the Tiger-Cats, ostensibly because he presided over a “rape culture” by his college players but never formally charged and then paid many millions to depart, many are wondering exactly what the priorities of the CFL actually are.

CFL commissioner Randy Ambrosie, apparently now a good judge of character, claims to have vetted Manziel, found him rehabilitated, fresh as a daisy as it were, and gave his blessing to the QB to play in the CFL amid many raised eyebrows, including a long time Browns observer in Cleveland who said of Johnny Football, “He played, he partied, he busted.”

Hamilton head coach June Jones, who advocated for bringing Briles in last year has completely confounded some CFL watchers with some bizarre statements regarding Manziel, claiming that Manziel could be “the best ever” to play in the CFL, despite Manziel not having had a successful football season since 2013.  Manziel has a career pro QB rating of 74 over 15 NFL games, placing him well below average, and these are numbers that will make him the “best ever” in the CFL?   That Jones would tend to view Manziel as superior to Doug Flutie and Warren Moon, who have been among the best CFL quarterbacks in CFL history seems odd.

Jones, who is normally a folksy, “aw shucks” character with the adoring local media got testy with Hamilton TV station CHCH when a female reporter pressed Jones on Manziel’s background, admonishing her to talk to the commissioner.

Manziel now claims his past behavior of violence and substance abuse is a result of bi-polar disorder, and now seeks a fresh start as a rather famous big fish in the little pond in Hamilton, a formerly booming industrial town fallen on hard times with a rather pedestrian inward looking provincial mentality. Put simply, it ain’t Hollywood and Manziel will be under the microscope from the Hamilton media which sleeps and eats Tiger-Cats.  Whether Manziel will become a favourite of the local media like Leo Ezerins-whose recent activities at the CFLAA remain unexamined by the Hamilton media-or a target, following him to inevitable visits to the local gentleman’s lounges with film crew in tow, is to be seen.  Even CFL uber fan and 3downnation web man and CTE nervous Drew Edwards  has his doubts about “Johnny Football,” previously noting Manziel’s bizarre posts to social media earlier in the year.

Considering the hype, it’s a given that every defensive player in the CFL will be gunning for Manziel’s scalp, which has already been badly concussed in the NFL at least once not to mention countless sub concussive hits throughout his youth, college, and professional career.  Whether, and to what degree brain injury might have played in Manziel’s reckless behavior might be debated, but one might seriously question whether or not a return to football is in Manziel’s best interest.

It appears we now have a classic example of “bread and circuses”, defined by dictionary.com as “something, as extravagant entertainment, offered as an expedient means of pacifying discontent or diverting attention from a source of grievance.” a major source of grievance could be the current formal grievance filed against the CFL by the CFL Players’ Association regarding concussion injury suffered by its current members, stating that the league “owes a duty under the laws of Canada, to protect CFL players.” 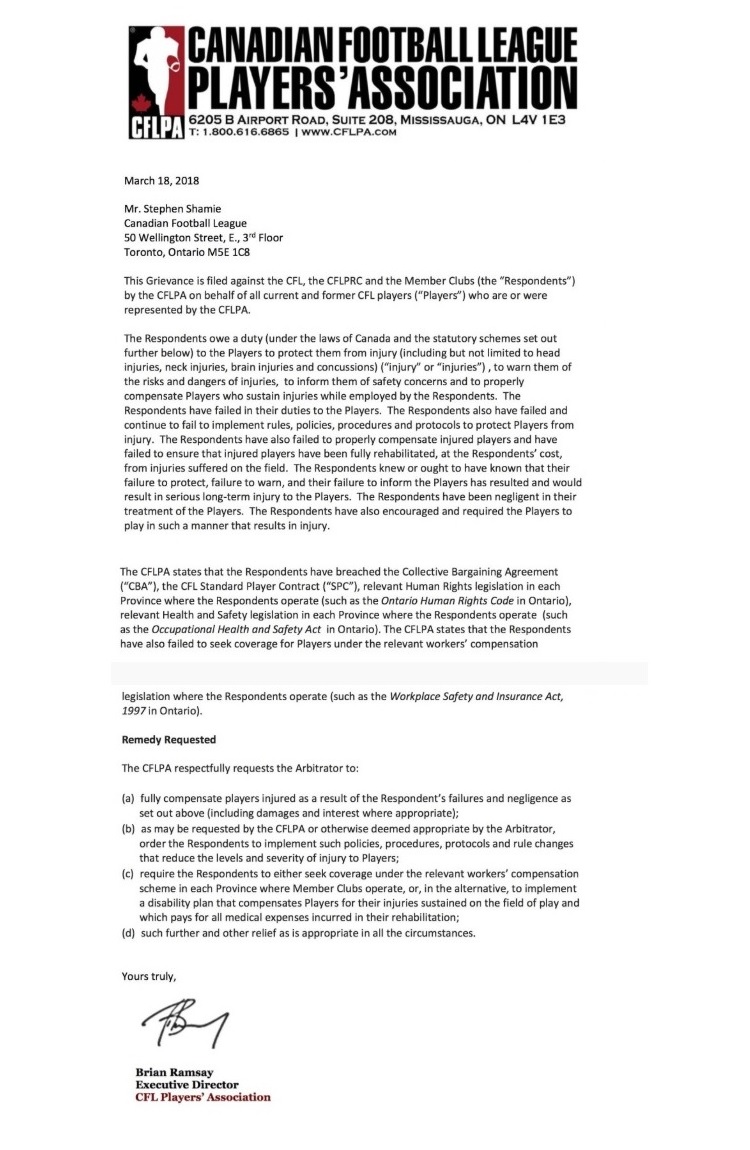 Although the CFLPA, which helps fund the CFL Alumni Association seemed previously to be riding the fence on CTE, they finally are taking the first step to hold the CFL accountable for concussion injury suffered by its members. Considering their past silence on former players suffering concussion injury, however, it is obvious that current membership is their main concern.

Accordingly, one would think again that the CFLAA, directed by Leo Ezerins, should be the advocate for former players and concussion injury, but that does not appear to be the case. While the mainstream media has welcomed Manziel as a sort of “gift of the Magi” they continue to look the other way regarding brain injury which might at least in part explain some of Manziel’s erratic behavior.

As time passes it would appear that it’s going to become increasingly difficult for the CFL and Canadian media to enjoy the bread and circus, without acknowledging the flip side.  On condition of anonymity a CFL team official provided the following statement to the Advocacy for Fairness in Sports:

“I was speaking at a conference with Bob Cantu out of Boston a few weeks ago and he said there is no doubt now that CTE is a distinct entity from normal ageing or even Alzheimer’s etc. They have come up with a world definition that is very specific that features the microscopic findings unique to CTE that are not found in other conditions.”

The Johnny Football circus is but a phony sideshow, convenient for the CFL to dodge bigger, tremendously more important issues like CTE.  In the meantime, the CFL which is largely viewed as a developmental league for the NFL seems to be enjoying the spotlight.

If the NFL is the touchstone of professional football and has already admitted the connection between football concussion and CTE-and has agreed albeit reluctantly to a billion dollar-plus settlement, where does that leave the CFL?

How about on the wrong side of history, and totally disingenuous, while hundreds if not thousands of former players suffer without compensation.

Shameful. And surely a situation where retribution will best be served cold.

Permanent link to this article: https://advocacyforfairnessinsports.org/feature-stories/cfl/bucks-before-brains-johnny-manziel-joins-the-cfl/