Canada, football, and brain injuries: Will the “better angels of our nature” ever prevail? 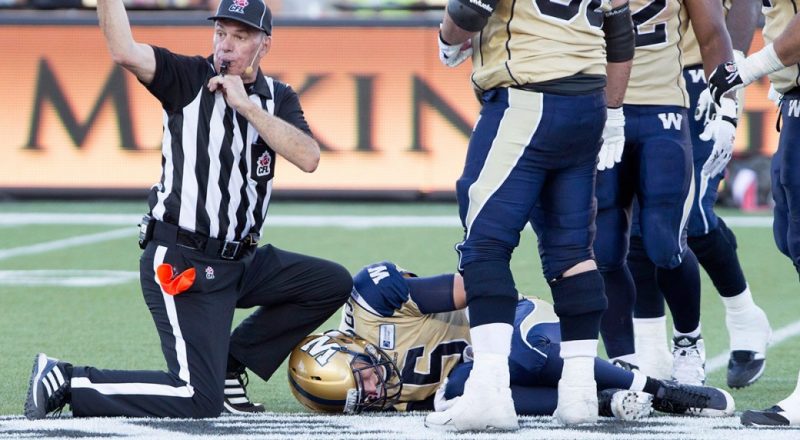 “We are not enemies, but friends. We must not be enemies. Though passion may have strained, it must not break our bonds of affection. The mystic chords of memory will swell when again touched, as surely they will be, by the better angels of our nature.”
~ Abe Lincoln,  1861

“Well, you see, in this war, things get confused out there. Power, ideals, the old morality, and practical necessity. But out there with these wounded warriors, it must be a temptation to be God. Because there’s a conflict in every human heart, between the rational and irrational, between good and evil. And good does not always triumph. Sometimes, the dark side overcomes what Lincoln called the better angels of our nature.” ~ General Corman, 1968

In 2014, the Canadian Football League’s PR guy, a pleasant enough fella by the name of Jamie told me the CFL could not grant me an interview on the topic of concussions and CTE for The Concussion Blog, but, most graciously, would offer that the league policy on such arcane CTE matters was simply “organic.” Four years later, little has changed.

It’s a foregone conclusion that the CFL has been aided and abetted with their curious CTE dog and pony show by a lot of the Canadian media who continue to flaunt the not ready for prime-time Dr. Tator “extreme caution” mantra when diagnosing the CTE gelded pinto. But here’s another question: “is the CFL also getting some muddy the CTE waters help from the Canadian Football League Alumni Association helmed by the Leo Ezerins?” 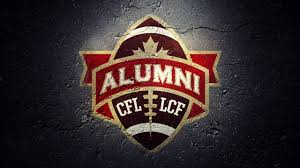 The word I get from various sources around the league is that the individual team alumni associations of which there are nine, one in each CFL city, pay dues to the CFLAA to partially fund it and of course Ezerins’ salary, and in many of the members’ opinions, do not get good value for their dollars.  Some members of the individual team alumni associations are not pleased with Ezerins’ stand, or lack thereof, on CTE as well as long simmering beefs about how the CFLAA dispenses its budget.

One such issue came to a head several weeks ago when Leo posted on the CFLAA website, a notice about Brain HQ, a firm with a protocol that includes linking CTE to old age. Ezerins said that the firm’s wisdom was obtained on a “discount.” Another head scratcher was a pitch for members to purchase Grey Cup tickets for the championship game in Edmonton, on November 25.

Some observers wonder about the location and price of the tickets-mostly end zone and/or in nosebleed territory-which are being re-sold by the CFLAA. Given that a recent scandal involving the reselling of Toronto Maple leaf playoff tickets, some are accordingly wary of the true cost of the tickets. No one is alleging anything untoward, but those selfsame concerned individuals are certainly curious.

But much more important to many CFLAA members than football tickets are football injuries and their outcomes, specifically, concussions and brain injury. As former star CFL player John Glassford told me last year, “everyone is scared.”  Sources say that the CFL may have a financial interest in Ezerins adventures with concussion, CTE and the CFLAA. I put the question to Oliver 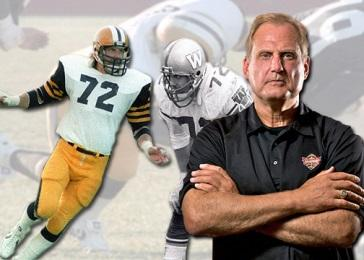 Who does Leo Ezerins really represent?

Poulin, the CFL’s “Director, Communications & Public Affairs,” but unfortunately, got no response, as has become typical when I’ve requested comment.  Interestingly, and on the same issues(s), my attempts to reach out to the Hamilton Tiger Cats Alumni Association also went unanswered. Perhaps Drew Edwards advised against it, but I doubt I will ever know as these sorts of things tend be, well under a darkened rock.

Some former players, and alumni members are now curious as to just whose interests are ultimately being addressed by the CFLAA when it comes to CFL related concussion injury and/or brain disease.   The CFLAA is at best fence sitting on the issue and is not an “advocacy group,” as related to the author by Ezerins in 2013. At worst, the union maybe in fact be advocating the questionable CTE research of Dr. Tator.

As noted in previously, Tator continues to throw considerable shade on the relationship between football concussions and CTE and some feel that his latest ongoing study of living former CFL players, as well as donated brains of former deceased CFL players, will end with a finding quite different to that of the Boston University CTE Center, whose latest CTE study has director Dr. Ann McKee stating that “it is very hard to deny a link, I think, at this point,” between sports concussions and CTE.

The Canadian Football League Players Association seems to be a wild card in this matter as well. Although they did file a grievance against the CFL after the Arland Bruce lawsuit was found by the Supreme Court of Canada to be unworthy of appeal earlier this year, the CFLPA did not answer my questions including if they had ever taken an official previous position on the Bruce suit as well as their opinion of some of the Canadian media’s disinterest in the obvious discrepancy between Tator’s research and that of BU.

Without a strong voice of advocacy by the CFLPA on behalf of former players suffering from brain injury, the successful holding to account of the CFL’s possible liability in the affair might be a bridge too far, especially in the football public’s eye, which survey after fan survey shows, places concussion and brain injury near the bottom of their concerns, with ticket prices always riding near the top of complaints and for some, the price of a beer-or many-at the ballpark.

However, if the fans were educated as to the ultimate dispensation of a successful lawsuit against the CFL for brain injury, they would understand that ticket prices would likely skyrocket and beer too. Then undoubtedly, concussions would then become a major fan talking point and concern but probably for all the wrong reasons. 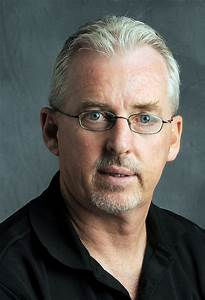 Perhaps adding glimmer of light to this dark scenario in Canada is Steve Buist a veteran no BS investigative reporter for the Hamilton Spectator who just won a National Newspaper Award for his 2017  four-part-series, Collision Course, on concussions injury/brain disease in former CFL players.

Buist did not specifically address the relationship between concussion and CTE, yet he did establish with the help of some excellent doctors at McMaster University that among the former CFL players who participated in the study, nearly ALL of them had significant deficits and disease from their record of concussions and/or sub concussive blows to the head while playing in the CFL.

Unfortunately, few in the Canadian media bothered to acknowledge either the McMasters research or Buist’s groundbreaking articles.  It’s worth watching to see what may happen next since Buist is a journalist of impeccable credentials who will be hard to dismiss.  It seems unlikely that work of this caliber can be ignored indefinitely even in the colonial mindset which has to date grasped much of Canadian sports media.  As more and more research is unveiled, denial seems unsustainable.

After five years of investigation, I still can’t quite fathom the end game here for the CFL. Or is there in fact a logical end game at all? The old not a bang but a whimper scenario which is surely a Canadian trademark may unfold.

Will they try the same kicking and screaming strategy as the NHL, now trying to derail an American class action suit brought by former players claiming brain injury, with “experts” akin to Tator debating the efficacy of the causal nature of CTE? After all, the CFL, like the NHL, has a commissioner that continues to deny the relationship of concussion to CTE in remarks that are increasingly difficult to fathom.

If the NHL tactic doesn’t work, will the CFL finally fold and admit what the NFL reluctantly admitted 4 years ago, that there is cause and effect between concussion and CTE?

There is a reason why the suit brought by the former NHL players was filed in the US. The principals probably realized that they would stand a much better chance at a fair trial, with a less hostile media reaction, than had the suit been filed in Canada. Regardless, unless Canada becomes the laughing stock of the world and passes a law to prevent such suits against the CFL-similar to a 1974 law that was to be passed to keep the World Football League out of Toronto- eventually, the CTE lawsuits will be successful here because the CFL and media can run, but eventually, with the weight of history and morality, and evidence, they cannot hide forever.

Depending on how many members of the CFLAA and alumni association end up with brain damage issues, and if Ezerins continues with his previous actions, there could be a general uprising of the membership, which should come as no surprise with players feeling no semblance of support.

Currently retired players are directed to a fund, which in 2013 Ezerins boasted had payed out $75,000 total to former players.  The lifetime cap of assistance, according to the form is $10,000, which with a cup of coffee might get a seriously impaired player a month of respite.

Richard Nixon observed in 1972, during a visit with Prime Minister Trudeau, “Canadians only care about hockey and beer.” [paraphrase] Little has changed since then.  Perhaps here in the Great White North, as the saying goes, “it is always darkest, just before the dawn.”

Permanent link to this article: https://advocacyforfairnessinsports.org/feature-stories/cfl/canada-football-and-brain-injuries-will-the-better-angels-of-our-nature-ever-prevail/

CFL Bucks before brains: Johnny Manziel joins the CFL Canada, football, and brain injuries: Will the “better angels of our nature” ever prevail? Canada’s League of Denial Conflicts of interest appear to abound in CFLAA Disappearance of Len Sparks adds to CFL family’s CTE turmoil Is the CFL stuck in 2011 in regard to football brain injury? Phil Colwell: A profile of one CFL player’s battle with brain injury The CFL’s Canary in a Coal Mine Why are Canadian doctors and media reluctant to come clean about CTE?