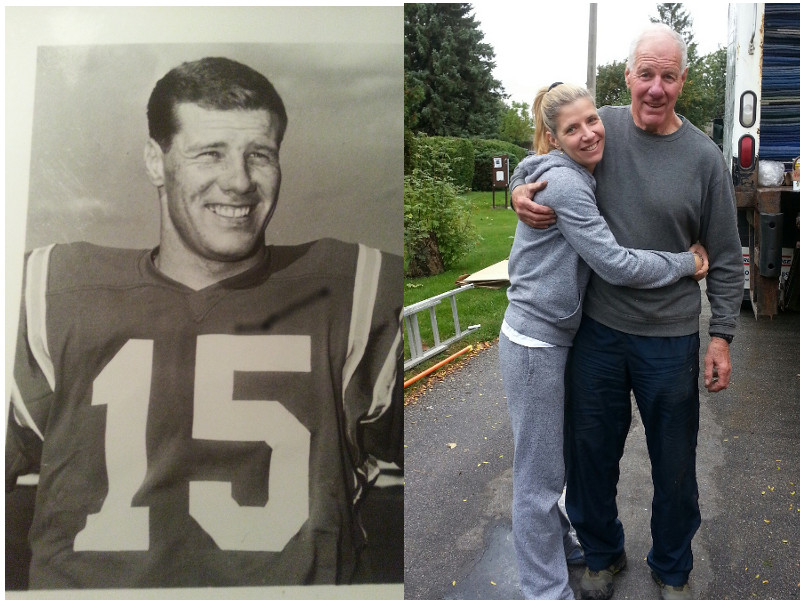 The 1960s was a time of seismic cultural and societal change and an immense sense of energy crackled in the air in all aspects of life.  And in that metric, the Canadian Football League would arguably enjoy their most golden decade with powerhouse teams like the Hamilton Tiger Cats, Ottawa Rough Riders, Winnipeg Blue Bombers and the Saskatchewan Roughriders who among them, captured 9 national championships in the 60s.

Leonard (Len) Sparks, a full football scholarship star player at Wyoming, was a northern Ontario boy who came south lured by the legitimacy of play in the CFL and eventually played for four different CFL teams between 1963 and 1969.  As a solid defensive back/end, Sparks was subjected to the terrible violence of the game at a time when helmets were little more than a lightly padded plastic shell, spearing and chop blocking with a head lead were routine and “concussion protocol” was a farfetched fantasy. A ringing of one’s bell, and “how many fingers do you see and what city are you in.” “Real men” sucked it up and went back to getting their noggins knocked again and again. 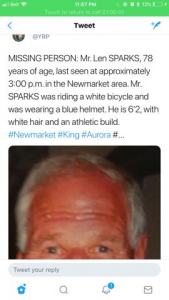 Fifty-some years later, Sparks, and his family are paying a big price for engaging in what was common place CFL football mayhem in the 60s.

Recently, Sparks, who lives north of Toronto, became disoriented after leaving the family home on a bicycle and disappearing for seven hours.

He became the subject of an extensive police investigation, eventually just short of a helicopter search.

MISSING PERSON LOCATED: Further to our earlier tweet, Mr. Len SPARKS was located safe and in good health. YRP would like to thank the community and our partner agencies, particularly #SouthSimcoePoliceService , in locating Mr. SPARKS. 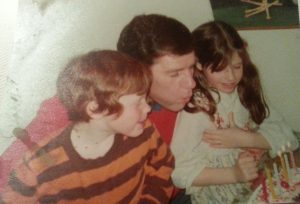 Len Sparks and his children in happier times

Luckily, Sparks was found safe at a gas station by police but sadly, in a state of confusion and upset, questioning what was going on.

Spark’s daughter, Erin, who cares for her father, was in a state of near panic during the time he was missing.

“The horror and sick feeling in our stomachs wondering, wondering, wondering…..seeing his face posted on social media as a “Missing Person”. I seriously thought for a minute, will I see my Dad again? I was taught by my parents to always be positive. My dear Mom who has endured too much, entertained the police officers as best she could and she did a first-class job. Just before 10pm we got the call from another officer that my Dad had been found,” said Sparks in an e-mail. 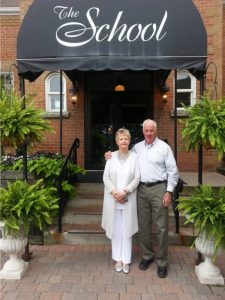 Len and Bonnie Sparks on their 50th Wedding Anniversary in 2016

The latest incident is just more of the same deficits the Sparks family has been dealing with since Len began developing symptoms of brain damage, including, memory loss, agitation, depression, personality change, rage, and denial.

Since there is no family history of brain disease, head injury or any other possible casual factor other than football, Erin Sparks and her family are convinced that their father’s problems are directly attributable to Len’s professional football career.

Two years ago, Erin enrolled Len in a study being conducted by the Canadian Sports Concussion Project and neurosurgeon Dr. Charles Tator, often referred to as “renown,” for his examination of brain pathology, and especially the study of CTE.

From the study information sheet provided to the Sparks family:

Although the above statement does not specifically identify CTE as an ultimate “decline of brain function” it has been established by Boston University CTE researchers that CTE-the apogee of non-vascular “decline of brain function”- is primarily, if not exclusively, the result of football or sports brain trauma and is rarely found in the general population, no matter what the age, or “other activities” so engaged. 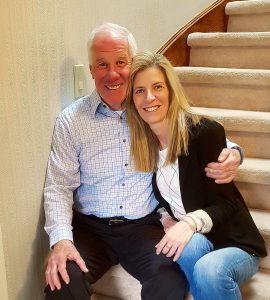 Erin Sparks thought it odd that a study ostensibly investigating the relationship between brain function and “repeated concussions and late decline in brain function” would omit the possibility of a finding of CTE, and she further became discouraged by what she termed a “cold” and rote approach by some doctors who interviewed her and her father. And when doctors requested a spinal tap for her father, she declined on his behalf and pulled her father out of the study.

Ms. Sparks, aware of previous media reports that stated that Dr. Tator advises “extreme caution” in the diagnosis of CTE from football concussions, felt that Tator’s study was not in the best interest of her father’s welfare and long term prognosis nor in advancing the understanding of football related brain injury. “I wondered just what kind of result they were looking for,” she asked.

From an Erin Sparks e-mail:

“Even though we only attended the “Canadian Sports Concussion Project” a handful of times, it never felt right. It appeared as my Mom, Dad, Brother and I felt “out of place”.

Were we bringing my Dad here for him, ourselves or because we were advised? We only want the very best for my Dear Dad. From our first visit with the Clinic we never even saw Tator himself. He was the one that only wanted to see Professional Athletes. My Dad played in the Canadian Football League!

We saw Mozhgan Khodadadi, MA, the Clinical Research Coordinator at Toronto Western Hospital and some other robotic like members of Tator’s team. I think while in school training for a job that involves people’s lives, it be essential and compulsory to take a course in civility and social graces. There is no appreciation and/or compassion for these athletes and their families. Personally, I felt embarrassed for my Dad that we brought him to this clinic as it appeared to only make him feel less of a person, a proverbial lab rat….although he would never say that, he’s too kind.

This clinic was not doing anything positive for my Dad, it was just a huge stress. Next, a lumbar puncture……. The Sparks have left the building. “

Leo Ezerins, a former CFL player, executive director of the Canadian Football Alumni Association,  a Tator protege and who in 2017 sent me an e-mail questioning my “silence” and addressing me as a well known Greek “traitor,” presumably for my reporting on CFL CTE cases.

Ezerins has just announced a CFLAA partnership with “Brain HQ,” an organization that appears to make an equivalency between football brain damage and age. Leo advises that he got the whole thing at “a discount”:

Ezerins, who has previously said that “our game [football] is under attack,” and that players claiming a diagnosis of CTE were on a “feedbag,” would, given some of his previous statements, seem to be a curious advocate for wounded warriors with football related brain injury.

“Given his statements on ‘feed bags’ and such, I think he’s the least qualified to opine on the causes of CTE. Age related, my ass. Old guys don’t play pro ball.” said a former CFL veteran player now suffering from football related brain injury. “He’s supposed to representing former players. Whose side is he on?” added the former CFLer.

What?  As you can see, Ezerins’ skepticism regarding a causal link between football and CTE is well documented.  Consider this:

Erin Sparks wonders just what is going on, also.  “I don’t get it. Why are they trying to make it like former players like my dad are somehow at fault for getting old?” she asked. “They seem to be saying that regardless of all my dad’s concussions in the CFL, it’s just an old age thing causing him trouble. That’s bogus.”

Ms. Sparks added that she is also “pissed off” at continually seeing Canadian media reports that laud Tator and his research which in her opinion, muddies the waters on CTE. “When I want to read about my dad’s condition, I do so from Boston, not Toronto,” she said, referring to BU’s CTE research center findings compared to that of the Canadian Sports Concussion Project overseen by Tator and crew.

“I am in such disbelief as to how brain injuries, concussions, and their life-changing outcomes are. How are there ANY questions about players’ concussions on the CFL field? Being in Canada, and lots of bullshit is the only difference I can see,” said Sparks.

While sometimes the admittedly righteous anger around the question of CTE causality can seem obviously partisan and divisive-a prominent Canadian brain researcher told me that he could not understand those presently taking “extreme positions” on brain injury from sports as the dust had not settled yet-but it is also understandable for the victims of presumed football-related brain injury to be looking for honest answers and a way forward, not denials which when it comes to CFL and CTE, seem to be a somewhat Canadian media specialty.

Erin Sparks, a victim of football as well, has dealt with a lot.  Outside her father’s illness and disappearance, she must deal with the CFL and their statements of “the science not being clear,” adversarial players such as Ezerins, denial researchers like Dr. Tator, and Drew Edwards of 3downnation who while refusing to answer her emails allows denigrating comments to post on his website.  “Dad said he didn’t understand what happened to him. He said he wasn’t thinking normally and felt so confused, nothing like he has ever felt in this particular way.”

This is what the CFL turns a blind eye as well? They have ignored all the suffering from the concussions while proclaiming, “your head and helmet are a weapon, use it”, “spear them”, “how many fingers am I holding up, get back out there!”

Therefore, it’s appropriate that Ms. Sparkss has the last word today: “Ezerins, Tator, et al, Edwards you can’t hide! I’m a proud and fearless daughter looking for what we know is the truth. Concussions and CTE are very present in the CFL.” 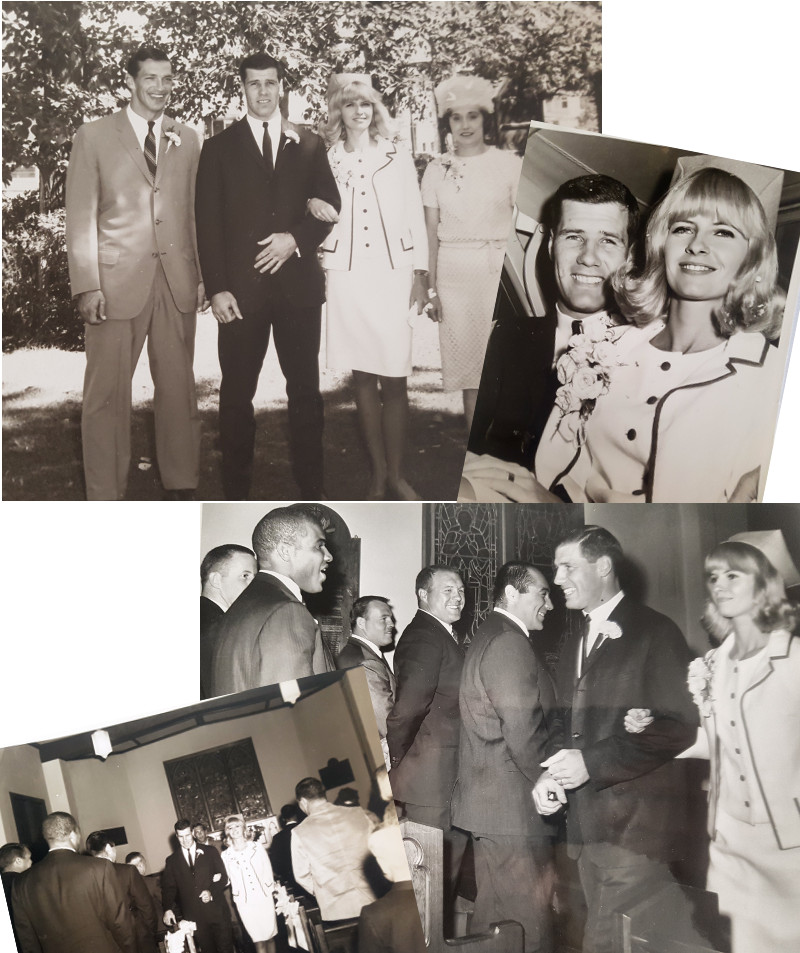 Len and Bonnie Sparks were married on August 28, 1966. They were introduced by fellow CFLer Joe Poirier in 1965, and Peter Liske was best man. Most of the crowd in attendance was fellow CFLers. One now has to wonder how many of these men are now suffering from their latent brain injuries along with Len.