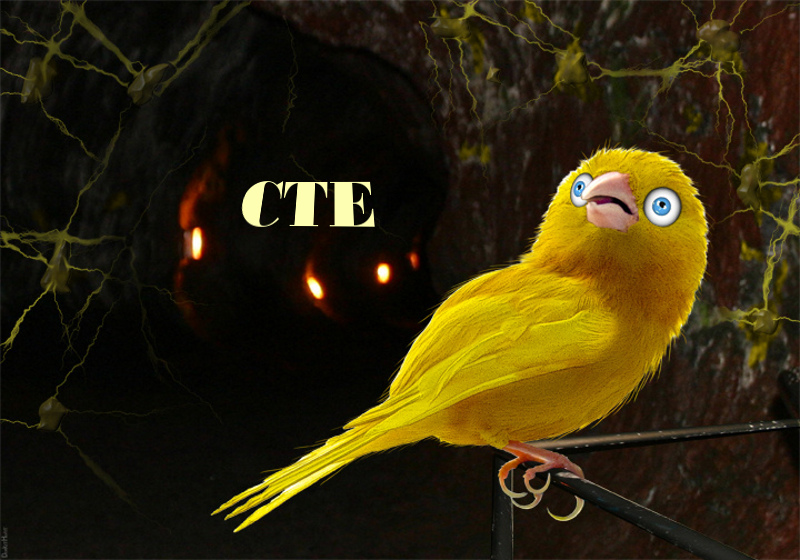 Over the past decade or so, evidence that something was wrong with former NFL players’ brains has grown exponentially.  The living, and even the dead told tales that the NFL did not want to hear.

During that time Boston University CTE researchers established a brain bank to “better understand the long term effects of repetitive head trauma” on football players and at that time, the CFL took notice, seeing it as the first, dangerous, shot across the bow for their league.

Although McGill University in Montreal had nibbled round the edges a few years earlier-a study that former CFL commissioner Larry Smith said in a 2008 CBC interview he knew nothing about-the CFL saw the train in the tunnel with the BU brain bank and studies, and this groundbreaker from 2009, link courtesy of a current CFL team official, detailing the study of progressive tauopathy after repetitive head injury.

What was the CFL to do?

In 2008, eight CFL Alumni associations were in existence, one for each CFL city. (The Ottawa CFL team folded in 1997.)

All were strictly unpaid, volunteer organizations that legitimately attempted to see to the ever-encompassing needs of former players. The CFL did not fund them.

Although  a recent media report states that Ezerins “founded” the national CFL Alumni Association in 2008, the CFL did not announce the new organization until 2009.

Ezerins became the “executive director”-although a recent CFLAA financial document now lists him as a “contractor”-thus becoming the first CFL associated alumni principal to receive financial remuneration for Alumni duties. The 2017 CFLAA annual report lists $48,000 for “administrative,” and about another $20,000 for attendant benefits, including travel. Ezerins did not answer an emailed question about his remuneration, or benefits.

In a rather unusual to say the least April 2018 interview for DriverChek, which bills itself as a “leading provider of workplace medical testing and assessments as it relates to alcohol and fatigue,” Ezerins waxed philosophical on his path to the CFLAA directorship, saying that in 1988 he went from CFL football player to travelling “shoe salesman” wherein he learned “humility,” mused on “how do you eat an elephant?” and also how he learned to “drink less beer.” CTE was never mentioned by Ezerins, although as former 1981 Grey Cup MVP John Glassford said last year, “everyone is scared” about the consequences of the dreaded disease.

Apparently, the above qualifications were attractive to the CFL who positively heralded the national CFLAA organization in a press release in ’09 and began helping to fund it.

The new CFLAA also received funding from the CFL Players’ Association and the then 8 individual CFL city/team alumni groups who were expected to donate as well.

According to multiple sources consulted for this story, the now 9 club alumni groups were and are less than enthused with having to kick back to the CFLAA which many former players considered redundant.

By this time, the nascent CTE research activity, led by BU, was getting media traction in the United States. Again, the CFL took quiet notice as the Canadian media, except for the CBC’s Fifth Estate, the only CTE bell ringer in Canada, were mostly obedient and somnambulistic.

Enter Dr. Charles Tator, of the University of Toronto, the Canadian media described “renown” neurosurgeon who was involved in concussion research in Canada, such as it was, and continues to be to this day.

Soon, Tator would partner with the CFL for what was later described by his spokesperson as a “symposium,” but what Tator described to me in a January 2013 email as a “helpful’ funding contribution from the CFL.

In May 2013 Dr. Tator published his “Absence of CTE” study of six former CFL players in which three were found to have CTE, one ALS, and the other two at autopsy found to have badly damaged brains.   This study was released about 6 months after Tator said the CFL had been “helpful” in his studies. The contradictory title of Tator’s research did not seem to ring any bells with the Canadian media at the time.

A painful excerpt from the “Absence Of” study, states that “Case 5” was so badly brain damaged from CFL football concussions at the age of only 64, “he would attack mirrors when he walked in front of them.”

No mention is made of CFL funding, which to a reasonable observer would appear to be a major conflict of interest.

Around 2012, Ezerins became active in the media, at first telling the Hamilton Spectator that he had had many concussions, including one so severe he had a difficult time finding his dressing room. The story described him as “the poster boy” for concussions in the CFL.  Oddly, after Ezerins was appointed CFLAA executive director, his focus abruptly changed, to saving the game of football instead of players’ brains.  He sounded the alarm that “our game was under attack,” and proceeded to try to shield it from damaging information that was surfacing from the Boston University CTE studies.  This appeared to be in lockstep with Dr. Tator’s accusations that BU would “call a press conference” every time they found another case of CTE.

In October of 2013, Ezerins gave an interview to The Concussion Blog, completely contradictory to his 2012 interview, stating that he did not know if he had ever had any concussions.  He also accused former players claiming CTE from concussion injury of being on a “feed bag,” and claimed that CTE could be “psychosomatic.” He denigrated Concussion Legacy Foundation founder Chris Nowinski along with his film and book, “Head Games,” and confessed that Nowinski had told him to stop bugging the BU researchers with his contrarian and absurd “psychosomatic” views on the cause and effect of CTE.

Whether or not Ezerins realized how some of his pronouncements would look when published, he subsequently stopped talking to The Concussion Blog amid the posting of a 7-part series on the CFL in early 2014 which included an Ezerins segment entitled, “The Linebacker’s Head Games.”

Six months later Ezerins was a named defendant in Arland Bruce’s lawsuit against the CFL, claiming deception and lack of care in regard to concussion injuries. 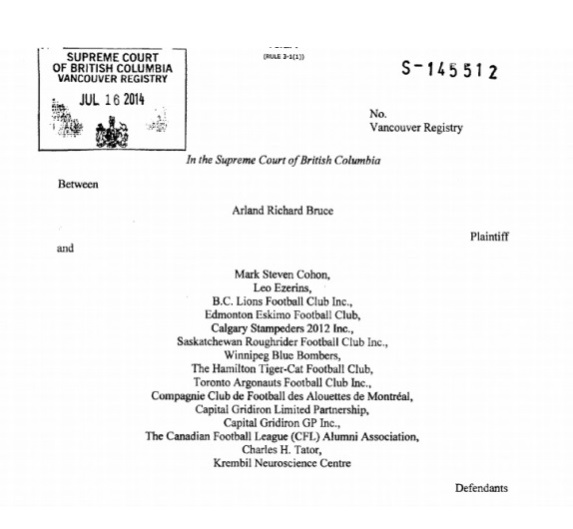 The pleadings accused Ezerins of deliberately trying to mislead on the cause and effect of CTE. Dr. Charles Tator was also sued, along with his clinic.

Ezerins et al described the suit as vexatious and having no merit. In 2017, Ezerins and the CFLAA were removed from the suit, which was eventually thrown out by several Canadian courts not on merits, or factual allegations, but rather on jurisdiction.  The Supreme Court, which only selects a small percentage of cases for review, declined without comment to hear the case.

Last year, Ezerins was elected to the CFL Hall Of Fame.  Since his ten-year career was no more noteworthy than at least a half-dozen other players from his era, including Grey Cup MVP John Glassford, it seems fair to wonder if his dutiful assistance to the CFL was a deciding factor.   Whatever the reasons, the result is apparent in the CFLAA’s website which contains no information about the impact of brain injury in relation to football, outside the opinion that “more study is needed.”

As part of Ezerins’ apparent war on brain injury reporting as it relates to the CFL, I’ve been contacted by sources quoted in stories for Advocacy for Fairness in Sports in which I’ve been told that Ezerins also contacted them, enquiring if their quotes for attribution were in fact, real; apparently an attempt to get a denial, or repudiation.

Enough of this phony and disingenuous foolishness.

While the original alumni chapters were established to assist former players in retirement, there is little to indicate that the CFLAA is committed to this objective.  Minimal evidence exists of the CFLAA assisting former players with concussion/CTE issues, as they dispensed only the paltry sum of $11,000 in medical assistance in 2017 and none if has been known to assist with brain injury.  The application process is complicated and littered with red tape, leaving former players like Phil Colwell, who suffers from neurological damage with nowhere to turn outside of food banks and social assistance programs.

While mainstream Canadian media romanticizes the arrival of Johnny Manziel, retired players are forgotten and pushed out of sight, but they can’t, be hidden forever.

This situation is the canary in the coal mine for the CFL.

Former players consulted for this story who belong to team alumni associations are of the opinion that Ezerins, for the sake of a well-paid and benefited gig, is, working against the best interests of the retirees in favor of the CFL PR machine. One of the kindest remarks came from a former teammate who said, “Leo is all about Leo.”

The CFL, like the NFL, will one day find itself in the crosshairs of a major class action lawsuit that demands accountability, or the league will face a day of reckoning from the public health crisis that is emerging from sports related brain injury.

Ezerins and the CFLAA would do well to get out in front of that eventuality and start telling the truth now, as well as really helping former players in need, because when all is said and done, solving rather than evading problems will be the only measure likely to save the CFL.

The day is coming that the CFL will have to pay the CTE piper.

CFL Bucks before brains: Johnny Manziel joins the CFL Canada, football, and brain injuries: Will the “better angels of our nature” ever prevail? Canada’s League of Denial Conflicts of interest appear to abound in CFLAA Disappearance of Len Sparks adds to CFL family’s CTE turmoil Is the CFL stuck in 2011 in regard to football brain injury? Phil Colwell: A profile of one CFL player’s battle with brain injury The CFL’s Canary in a Coal Mine Why are Canadian doctors and media reluctant to come clean about CTE?