New Jersey’s SB 971 is the Compromise of 1850 Reincarnated 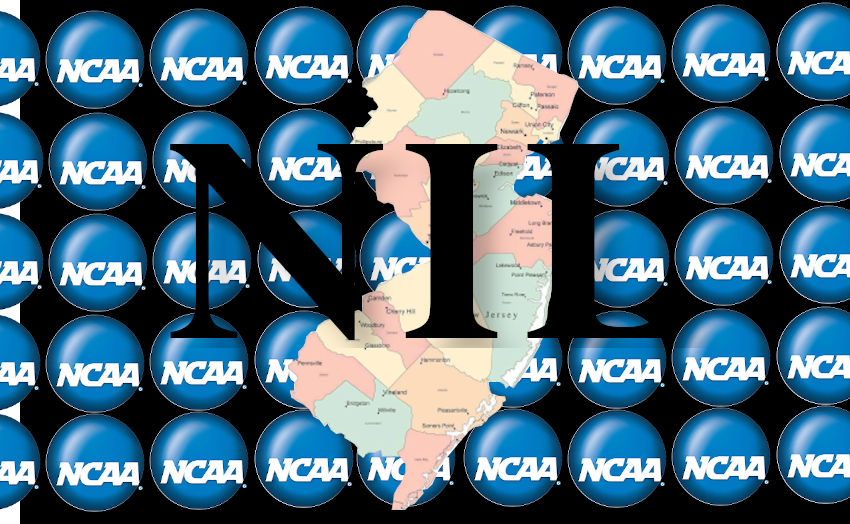 New Jersey SB 971, a bill that advanced out of the N.J. Senate’s Higher Education Committee on Thursday is a perfect representation of why these measures on a state level will fail to meet their stated goals. No matter how altruistic and heroic the intents of those who sponsor and support the bills in the disparate states considering similar motions are, the measures will ultimately prove as ineffective as the Compromise of 1850 in United States history.

The issues that Congress addressed in the package of laws were:

All those issues were addressed in an effort to maintain peace between the nation’s abolitionist, moderate and pro-chattel slavery factions. As anyone who has even a precursory knowledge of US history knows, however, South Carolina citizens used force to seize the military installation of Fort Sumter 11 years later regardless.

While the question of college athletes’ economic rights is unlikely to result in four years of violent conflict, state governments’ attempts to force the NCAA and its members to stop their violations of such rights won’t achieve that objective in a manner similar to how the Compromise of 1850 failed to prevent a civil war. Like how the Compromise actually made life worse for those held in chattel slavery, these state-level measures could actually backfire and put state governments behind treating college athletes as second-class citizens.

The tenets of SB 971 are rife with the theme of compromise. That’s apparent for the first time in Section 2.A.2. The section begins with the words, “a four-year institution of higher education shall not:” then proceeds to list what those institutions shall not do. The subsection of interest reads:

There is a lot to unpack about how this is problematic. First off, this isn’t how normal job markets work. If this bill were to become law and actually be enforced, it would put college athletes in New Jersey in the precarious position of having to make a decision on where to commit without knowing where the best situation for their economic interests would lie. The language is meant to address two concerns but neither concern holds much water.

Opponents of respecting instead of violating athletes’ publicity rights argue that such institutions could use NIL as a device to pay athletes for their play. Even if you for some archaic reason find that intolerable, the lack of such a provision encoded in state law would not force Rutgers or Seton Hall to do so. If such institutions are truly as opposed to doing so as they claim to be, then they don’t need the state to tell them they can’t.

That concern extends to the athlete recruitment process. The fear is that schools will arrange endorsement deals for athletes as enticements. That fails a test of absurdity because that’s ongoing right now, even above the table. Schools arrange for boosters to finance the construction of lavish facilities, for example, and then use those as recruitment tools. The only difference between the status quo and what NCAA apologists fear is that the athletes would get a cut in the latter situation.

Section 2.A.2 is not only unnecessary but puts the athletes that this bill is intended to advocate for at a disadvantage. It’s a concession to the institutions to get their support for the bill. This is not the only compromise, however. Section 2.B goes even further in treating athletes as second-class citizens. 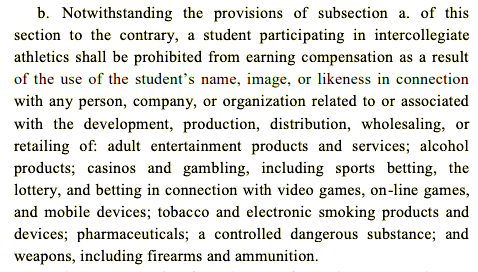 This would be a type of “sin law” for athletes. While that might have its merits in the eyes of moral crusaders, the restrictions are nonetheless problematic because only college athletes would be in violation of state law if they were to enter into such relationships, again, if this bill were to become law and actually enforced as currently composed.

To demonstrate the inequality, Rutgers head American football coach Greg Schiano would face no legal consequences if his face appeared in promotional materials for a New Jersey online sportsbook. In a similar way, a non-athlete Seton Hall student who makes a YouTube ad for a business that makes custom vape juice would not break New Jersey law. If a player on Schiano’s team or an athlete who shares classes with that Seton Hall student were to do the same, however, the state would revoke that athlete’s scholarship eligibility. If the aim of this legislation is to give such athletes the same rights as everyone else in the state, then this language actually works contrary to that interest. Going further on the theme of working contrary to athletes’ best interests, Section 4.B.1 could be even worse.

By requiring athletes to ensure their economic interests are in alignment with their institutions’, that effectively puts the institutions in control of which parties the athletes can contract with. Again, there is no state law requiring Schiano to make sure his paid public appearances only take place in conjunction with enterprises whose business does not conflict with Rutgers sponsors or compelling that Seton Hall non-athlete student to tailor her/his Instagram feed to avoid similar conflicts. Section 4.D is similarly an issue, forcing athletes to give the NCAA free access to their NILs in perpetuity.

Beating the dead horse, there is no state law that requires anyone else in the state to do so. While NCAA apologists may argue that athletes currently agree to do so, encoding such a provision into state law would be taking that up a notch. It’s representative of the compromise that this bill exhibits. Another interesting dynamic this bill exhibits is a revelation of its actual intent. The language makes it quite clear in Sections 3 and 5. 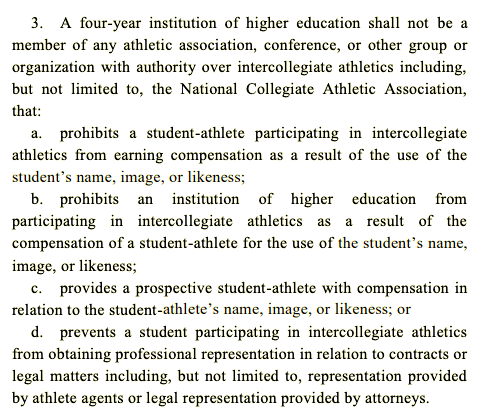 Those two partitions combine to obviously state that this bill is an attempt to influence the NCAA to update its by-laws. The bill’s crafters have no intention of New Jersey actually enforcing the tenets of this bill if it becomes law. New Jersey would have no power to do so even if it tried.

The language of Section 3 especially plays right into the NCAA’s hands if the state ever were to actually enforce any of the language of this bill against Rutgers or Seton Hall once it took effect. The NCAA would sue the state’s governor in federal court, perhaps setting up an NCAA v. Murphy (if Murphy is reelected) that should sound familiar to sports betting law buffs. In that trial, the NCAA could easily argue that under the Dormant Commerce Clause the state of New Jersey cannot regulate its conduct and use Miller v. NCAA as precedent. It’s likely the NCAA would win and this law would be ruled unconstitutional, perhaps also striking down similar laws in other states at that point as well.

That’s why even if this bill becomes law, the state may never even try to enforce it and whether or not this bill ever becomes law really isn’t the point at all. It’s all about putting pressure on the NCAA to adapt its by-laws. The belief is that the NCAA’s members will cave to that version of popular sovereignty and allow athletes unrestricted use of their NILs.

That hope is misplaced, however. The compromise tenents of this bill are clear evidence that the NCAA’s membership will never allow such usage in a manner that those institutions don’t control and continue to profit off of without the US Congress or another force with similar power compelling that change upon it. That force would be a union for college athletes with the power to bargain for the terms under which they will provide their labor.

Just as Henry Clay of Kentucky and John C. Calhoun of South Carolina agreed to let California enter the union as a free state in exchange for a new Fugitive Slave Act that mandated the return of runaway chattel slaves by federal authorities instead of leaving that up to the disparate states, this bill acquiesces to the self-serving ideology of Rutgers and Seton Hall in an effort to keep the peace between all parties.

Just as Daniel Webster of Massachusetts gave his consent to allow the interest of chattel slavery to flood the New Mexico and Utah territories with people kind to that interest in exchange for abolishing the trade in Washington, D.C., the NCAA’s members will formulate a plan to “modernize amateurism” that will maintain those institutions’ powers to treat athletes as chattel while feigning a very incremental degree of progress in lessening the exploitation of those athletes.

There is no compromise with despotism, however. Despotism is an all-or-nothing proposition. The evil of chattel slavery took an armed conflict to resolve because the despots refused to surrender without that use of force. In a similar way, college athletes will not be free from bodily, economic or sexual exploitation until the institutions recognize them as employees with bargaining rights. While it will likely require the force of law to implement such changes, the Compromise of 1850 is proof that doing so on a state level is ineffective. Eventually, the federal government is going to have to act.

Because of that, it’s crucial that advocates for college athletes focus their attention on banning this form of exploitation in Washington, D.C. just as Webster did nearly two centuries ago. That’s where the NCAA’s members focus their energies and appropriately so. Reforms on every issue pertinent to college athletics, whether it be the quality of education, healthcare, protection from sexual predators or economic exploitation, can only come from Congress forcing NCAA members to grant their athletes full employee status to create a robust union. Anything less is another compromise that only delays a more heated conflict, just as that which transpired 170 years ago.

Permanent link to this article: https://advocacyforfairnessinsports.org/feature-stories/legislation/new-jerseys-sb-971-is-the-compromise-of-1850-reincarnated/

Legislation Florida’s NIL Law Makes the State Another Predator for College Athletes’ Economic Interests New Jersey’s SB 971 is the Compromise of 1850 Reincarnated SB 206 Would Benefit More Athletes Than the Narrative Indicates What does Illinois Senate Bill 12 Really Mean in Regard to Pro Athletes?