Charles Rogers Didn’t Have to Die 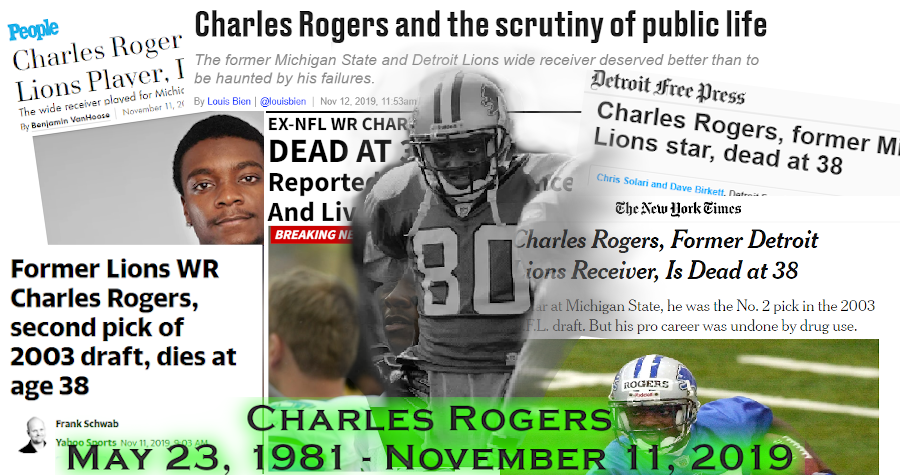 Columbus, OH—In the hysteria about weekly updates to college football playoff rankings, the suspension of Chase Young (and James Wiseman), and Tua Tagovailoa injuring his hip, there was another college football story that might have been lost in the shuffle.

Charles Rogers, a former first-round draft pick of the Detroit Lions (#2 overall), died last month at 38. After a record-breaking career at Michigan State, he was out of the NFL before his 25th birthday and, after that, the story of being a bust in the draft practically writes itself: weed, booze, “brushes with the law.”

One tribute casually mentioned he had smoked weed every day he was at Michigan State and became addicted to painkillers after two broken collarbones with the Lions. More than a decade of struggle ensued, and now he is gone.

There but for the grace of God go I.

After I was cut by the Denver Broncos in the summer of 2005, at 22 years old, I spiraled into a deep depression fueled by a lack of any identity outside of playing football. It is all I had trained to do since I was in 7th grade. I had foreclosed every other identity.

After I was cut, I went heavy into drinking and drugs, was popping every pill I could get my hands on just to try and make the hurting stop, and ultimately resorted to a life of criminality. I was in the streets bigtime, ripping and running, until I ultimately got caught and ended up in prison.

I thought I was ready to die at this point in my life, but prison gave me a place to grow and develop. So, Yes, it was by God’s grace and two years of behavior modification classes while I was in prison that I’m alive today.

When I see a story like Charles Rogers dying, my first thought is that could have been me. And my second thought is this didn’t need to happen this way.

In a better world, Charles could have written a different ending to his story, like I am right now, as the founder of two social service agencies in Ohio, who speaks all over the country about my conquest, my catastrophe, and my struggle to maintain my mental health.

Truer words have never been spoken. A life that seems so glamorous and glorious from the outside becomes synonymous with failure for so many players. A very small percentage of them get to leave the game on their own terms, and aren’t prepared, in their 20s, to live happy and healthy lives.

I was lucky that my prison offered an integrated cognitive behavioral change program—called Thinking for a Change—and I spent as much time (40-60 hours/week) studying those materials and participating in group classes as I had spent practicing, lifting weights, and studying films at OSU.

In my one year as a college football player, my team and I went 14-0 and were “Unstoppable.” Then, we shocked the world by beating the seemingly invincible Miami Hurricanes, but back in 2006 I had a different goal: build up my mind and my mental health and come out of prison prepared to face this tough world so many of us live in.

It wasn’t easy then, and it’s not easy now. I still participate in weekly therapy sessions now that I’m living on the outside. I meditate daily and take medication daily and probably will for the rest of my life.

This is how I try my best to maintain my own mental wellness. It’s a part-time job all of its own and I have to put in work every single day. It doesn’t come easy and not everybody comes all the way back from substance abuse and depression so I consider myself blessed.

Most fans don’t realize that getting drafted as the #2 overall pick and not attaining greatness can sometimes be worse that not being drafted at all. When the expectations are that high, the inability to fulfill them is that much worse.

When you don’t live up to the hype, you can’t go back to your hometown, because every person you see reminds you of what you didn’t become. You can’t go back to your college program either because all the young guys want to know is what you’re doing to get back into the league, because most of them can’t see themselves, or people who look like them, as anything other than football players either.

It’s a tough world indeed, but these young athletes don’t need to die. I dedicated my recently-released book, One and Done, to all the young football players who have died senselessly through violence, neglect, or suicide. I hope with my heart that Charles Rogers is the last of us to go that way, but I know in my head he will not be.

Permanent link to this article: https://advocacyforfairnessinsports.org/feature-stories/mind-of-maurice-clarett/charles-rogers-didnt-have-to-die/