This we know. Trevor Lawrence is NFL-ready. 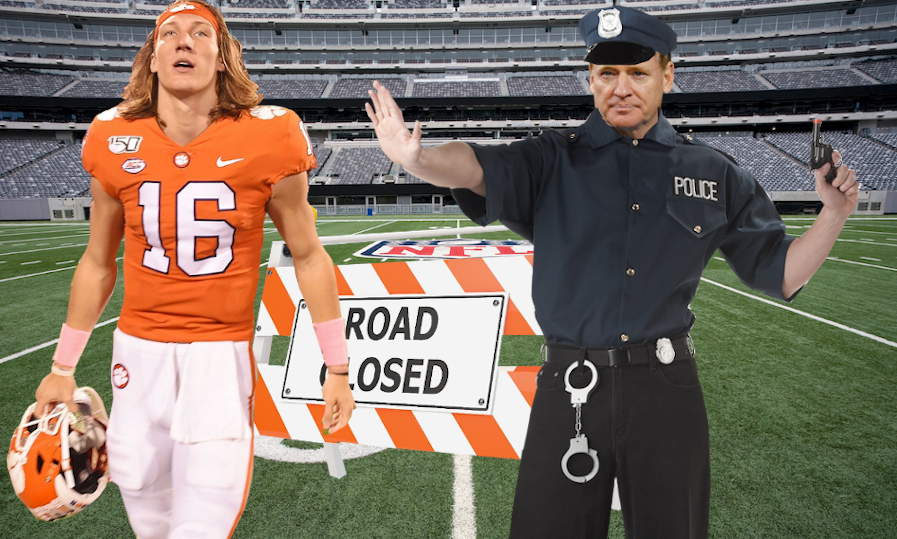 I knew it even before last night’s game. I have followed Lawrence for the last two years and seen his greatness. But everyone else should have seen it last night.

Great leaders impose their will on the outcome of big games. I was rooting for the Buckeyes 100% but was worried throughout because I know Lawrence just doesn’t lose and his teammates know that playing behind him means you don’t lose so they flat-out play to win.

In my one year as a college football player, my team and I went 14-0 and were Unstoppable. Then, we shocked the world by beating the seemingly invincible Miami Hurricanes in the Fiesta Bowl.

People saw most clearly how I imposed my will on the outcome of the 2002 National Championship game when I stripped the ball from Sean Taylor. My teammates did the rest because they knew I didn’t lose and they didn’t lose when playing with me.

The strip has been called the Best Play in College Football History. But I tell people that I just saw an opportunity to make a play and I took it.

In last night’s 29-32 victory over OSU, Clemson QB Trevor Lawrence made a lot of plays too.

People were saying Lawrence was ready for the NFL after last season in fact. Draft guru Mel Kiper said Lawrence would be the clear-cut number one when compared to elite quarterbacks Dwayne Haskins and Tua Tagovailoa.

So why can’t Lawrence, even after this season’s performance, and last night’s heroics, declare himself eligible for the upcoming NFL draft?

Federal Court Judge Shira Scheindlin (a Michigan Wolverine!) laid it all out in her lower-court decision in my case against the NFL, when I challenged the NFL’s three-years-out-of-high-school-rule: Clarett v. NFL (2004).

Unfortunately, Judge Sonia Sotomayor and a panel of the Court of Appeals, Second Circuit, saw things differently and overturned her decision. Sotomayor’s NFL-friendly opinion was so bad that a law professor at Michigan State (Sparty!)—who uses my case in his Sports Law class every year—called it the most results-oriented, poorly-reasoned decision he’d ever read.

Just like Curt Flood, Jr., an MLB all-star and pioneer in the athletes-rights movement of the 1960s and 70s found out, you can’t beat professional sports leagues in court.

But Trevor Lawrence is 6’6”, 220 lbs, and 100% ready for the NFL. He might not be able to beat the NFL in court, but he could beat them in the court of public opinion and force their hand.

Remember, this is how the three-year rule came about. Before 1990, it was a four-year rule but Pete Rozelle concocted a special exemption for Barry Sanders who had won the Heisman as a junior and was going to challenge it.

And then the following year, the NFL just up and changed the rule for everyone to three years when Andre Ware and others were going to also challenge it and the NFL knew it would lose.

Trevor Lawrence needs to challenge the NFL this year for one simple reason: Tua Tagovailoa.

Look at what happened to Tua this year. After heroically coming back a week after radical ankle surgery—which is not the norm in orthopedics—Tua suffered a devastating hip injury playing in garbage time against a clearly-inferior opponent.

Tua should never have been on the field. In fact, he probably shouldn’t have been playing for free for the University of Alabama this season. He had a similar ankle injury in 2018, and a similar radical procedure, but still performed incredibly well. So well that he likely would have been a first-round draft pick in last year’s NFL draft if he had been eligible for it.

And now Trevor Lawrence is supposed to return for his junior season at Clemson, where his head coach makes close to $10 million/year, and play for free?

Remember that QB Kyler Murray, the 1st pick in the 2019 NFL draft signed a $35 million contract with a $23 million signing bonus.

There is no telling how much the injury to Tua Tagovailoa will cost him. But it shouldn’t have cost him anything. He should have been in the NFL this season. He would likely have been drafted before Haskins and maybe before Jones.

In fact, if Trevor Lawrence had been in last year’s draft, he likely would have been selected ahead of Jones, and certainly, if he is in this year’s draft, he will go in the first 5 picks, which means a bonus of close to $20 million.

The only thing preventing him is the archaic rule agreed upon by the NFL and the union for the players, to protect veteran jobs from the NFL getting even younger.

This rule is consented to and supported by the NCAA and all the major conferences, who are banking hundreds of millions of dollars every year on the backs, bodies, and brains of unpaid labor. They all filed amicus briefs against me and in support of the NFL in my case.

In the midst of our 2002 National Championship season, ESPN did a story on me called Good to Go and labeled me as One and Done on the cover of their Magazine. I missed the 2004 draft because of questionable legal reasoning, and I missed my moment by the time I was drafted in 2005. At that point, I had been out of competitive football for 2 years and had spiraled into a pathology of drugs, alcohol, and depression.

But Trevor Lawrence doesn’t need to miss his moment and risk a catastrophic injury like Tua’s. His moment is now and all reasonable and fair-minded Americans need to support him.

Permanent link to this article: https://advocacyforfairnessinsports.org/feature-stories/mind-of-maurice-clarett/this-we-know-trevor-lawrence-is-nfl-ready/

Mind of Maurice Clarett Be Ready When Recess is Over Charles Rogers Didn’t Have to Die Football Players are Dying Maurice Clarett: Nobody Can Teach You How to Be Famous Mental Strength is Physical Strength This we know. Trevor Lawrence is NFL-ready.