Mitchell vs. Baylor Highlights Lack of Care for Neurological Issues in Women’s Soccer 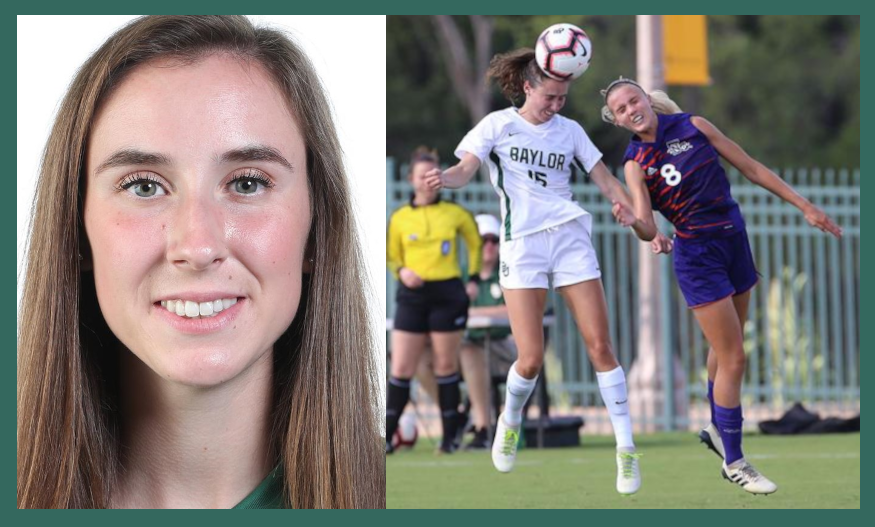 A new lawsuit in the US District Court for the Western District of Texas alleges that former Baylor women’s soccer head coach Paul Jobson forced players to go through repeated header drills using a ball machine and as a result of that abuse the plaintiff, Eva Mitchell, has suffered brain injuries traumatic enough that for the past 18 months she has been unable to function independently.

Mitchell’s counsel, attorneys Jason Luckasevic and Robert Stem, filed the complaint on Mitchell’s behalf on Wednesday. Mitchell’s story is a cautionary one for all college athletes but especially for those who play soccer and identify as women. Information about the risks of brain trauma for such athletes shows such women face elevated risks in sport.

According to the press release from Luckasevic’s firm (Goldberg, Persky & White of Pittsburgh, Pa.), Mitchell was subjected to “repeated and dangerous header drills in practice.” Perhaps the most egregious of her allegations about Jobson was his use of a ball machine in drills.

A former collegiate player and college coach who is currently coaching in the USL-W league said that the ball machines he has used have a warning label on them explicitly advising users not to utilize them in header drills. He stressed that while practicing set pieces in college soccer is very common, in his experience an actual human being has always been sending the ball in as opposed to a machine.

The release states that Jobson would load balls into a machine and launch them into the air “recklessly and repeatedly,” demanding the players under his charge head them. It goes on to state that in August of 2020, Mitchell was diagnosed with central vestibular disorder, Dysautonomia, and post-concussion syndrome.

Among her symptoms have been anxiety, debilitating and persistent dizziness, and depression. The release also states doubts that she may ever fully recover from her injuries.

Background of the situation

Jobson resigned from his position as the head coach of the Baylor women’s soccer team following the 2020-21 season. In his resignation, he cited no particular reason for his decision.

Jobson was part of the Bears’ women’s soccer coaching staff for 14 seasons. He was the head man for nine following five as an assistant coach in the program. Prior to his stint at Baylor, he was an associate head coach in the same sport at Northern Illinois University.

The former 2016-17 Gatorade High School Soccer Player of the Year for Kentucky played her first two years of college soccer at the University of Kentucky before transferring to Baylor due to the program’s recruitment of her. She was named to the All-Big 12 Academic First Team in 2020 and started 10 of 18 matches during the 2019 season.

Prior to her transfer to Baylor, Mitchell had an active career on the pitch. She played in all 18 matches as a sophomore and led the Wildcats in both goals and points for part of her freshman season. Upon her transfer, however, she saw less action in matches and ultimately did not play the fall 2020 season.

For other women soccer players, it’s another reminder that they have to educate themselves and be their own best advocates in a system that takes neither responsibility seriously. The college sports industry treats athletes like Mitchell as collateral damage in its pursuit of power and profit.

Luckasevic summed up his sentiments about Jobson’s alleged treatment of Mitchell and her teammates while they were playing for Baylor in the release.

“It is critical that the schools understand that the health and safety of its amateur athletes must take priority over winning games and dangerous drills. It’s hard to believe that catapulting objects from a machine repeatedly and forcing women to participate in unnecessary header drills was done in this day and age. Haven’t we learned enough about brain injuries and the long-term neurological damage individuals sustain from all the athletes we know who have suffered from traumatic brain injury? Reckless conduct like that of Baylor University cannot continue. Our society cannot continue to bear the cost of the injuries to young athletes like Ms. Mitchell, who will needlessly suffer for the rest of her life thanks to the win-first, safety last mentality which continues to exist throughout college athletics.”

Beyond the issue of whether Jobson improperly used a ball machine in header drills is the lack of education that college athletic programs provide women’s soccer players about their neurological risks. Furthermore, the availability of trainers able to adequately treat players who do sustain concussions and keep them out of play when they are still vulnerable compounds the issue.

For women who play soccer, the risk of brain injury is very real. According to advocacy group PINK Concussions, female athletes sustain more concussions on average than their male counterparts. Additionally, those who do suffer concussions experience or report a higher number and severity of symptoms as well as need a longer duration of recovery.

The NCAA’s concussion protocol only states that athletes may not return to competition on the same day they sustain a concussion. Other than that, the NCAA leaves every other phase of neurological health to each member institution to manage on its own. That huge gap in oversight could have played a part in Mitchell’s injury and others like it.

Why athletes can’t advocate for themselves in college sports

Even if institutions like Baylor have the best concussion protocols in the world, the actual implementation of those standards in competitions and practice comes down to staff availability, education, and motivation. In an intentionally under-funded sport like women’s soccer at the collegiate level, those elements are compromised.

At some institutions, women’s soccer teams share athletic trainers with other teams. Thus, they are not available at every competition or practice. Even at the institutions with enough trainers to staff every activity, whether that personnel is adequately trained to recognize the signs of a concussion in athletes is inconsistent.

Furthermore, whether those trainers have the actual authority to remove an athlete from participation is another matter. In many programs, the athletic trainers are subordinate to the head coaches.

Thus, in situations like that Mitchell alleges when the coach is the one causing the harm, an athletic trainer is likely powerless to do anything about it. Thus, the responsibility falls on the athletes themselves to advocate for their own well-being.

The power dynamics of the college sports industry make that risky for athletes, however. Coaches hold not only power over athletes’ competition chances but also their financial aid, housing, and even their diet. Coaches can also hinder athletes’ chances of transferring to another program. It’s difficult to defy the will of a coach when that person holds your very livelihood in their hands.

If Mitchell’s allegations are true, then Jobson displayed no regard for her life or the lives of her teammates. Even if her lawsuit is successful, she will likely have to deal with the consequences of Jobson’s actions to some degree for the rest of her life.

Permanent link to this article: https://advocacyforfairnessinsports.org/feature-stories/ncaa/mitchell-vs-baylor-highlights-lack-of-care-for-neurological-issues-in-womens-soccer/