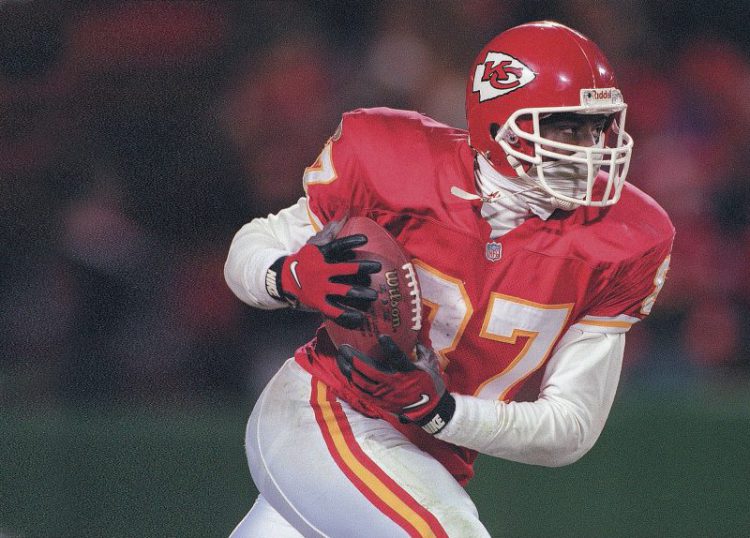 Vanover’s opponents on kickoff and punt coverage teams used to grasp at him in futility as he raced toward the end zone. Now nearly two decades later, Vanover feels that same futility in having anything to show for the days given to the NFL (Photo by Damian Strohmeyer/Sports Illustrated/Getty Images) (SetNumber: X51929)

The tales of former NFL players who gained a place in the spotlight with their athletic ability but were just as quickly forgotten when off-the-field or injury issues sidelined them are plentiful. In some cases, however, that vanishing is about more than unfortunate circumstances. Sometimes, that’s the result of deliberate action. Former NFL player Tamarick Vanover feels his narrative fits that description.

In the mid-1990s, NFL fans would have been hard-pressed to find a more electric player than Tamarick Vanover. After finishing a successful collegiate stint playing wide receiver for Florida State University, Vanover was drafted 81st overall by the Kansas City Chiefs in 1995.

Vanover then went on to be named to the the All-Rookie Team in 1995 after leading the league in yards per touch (17.1) and non-offensive touchdowns (three). His play as a return man on the Chiefs’ kickoff and punt return units earned him first-team All-Pro status in both 1996 and 1997. Vanover still ranks in the top five in NFL history in career kickoff and punt return touchdowns.

After the 1999 season, Vanover, his agent and the Chiefs negotiated a new contract. He would never see most of that money, however. In April of 2000, the Chiefs released Vanover after he pleaded guilty to assisting in the sale of a stolen vehicle in February of the same year. Not only did the Chiefs release him, but they filed a grievance against Vanover to recoup the part of Vanover’s signing bonus already paid to him. The arbitrator ruled in the Chiefs’ favor, making Vanover the first NFL player to ever repay his signing bonus to a team.

That’s when Vanover says things really took a turn for the worse.

“I talked back and forth to one of the NFLPA’s top lawyers and he said basically that there is nothing I could do about it,” Vanover said. “I kind of left it alone for a couple of years even though I was still upset about the fact that they were allowed to get away with that. It really didn’t come to light until the same thing came about with Michael Vick with the dog fighting. They tried to pull the same thing on him but he had an outside attorney.”

“I felt like because I wasn’t a high profile player in his eyes, he just kind of shoved it under the rug, because even he said in his brief that this had never been done in NFL history, it’s like the arbitrator made up his own [rules]. Basically he told me that since it went through arbitration, arbitration is final.”

The number of labor disputes involving NFL players and the league and/or one of its franchises that have been taken to civil courts by the NFLPA since Vanover’s arbitration hearing continues to grow. Vanover says that his own attempts to do so have fallen short due to difficulty in finding qualified counsel willing to take on the case.

“I think it all depends on who the player is,” Vanover stated. “I think that if you are a lower level guy, special teams, who doesn’t have as much relevance in the league, I think they [the NFLPA] don’t push that as hard as if you’re a front line guy or quarterback. They kind of pick and choose who they are going to stick their neck out for. I’ve talked to several lawyers, some of them being big time lawyers, and they all said it’s a very interesting situation but none of them have wanted to take it on because I’ve said before it isn’t a high profile case. They did say they had concerns about statute of limitations but from what I’ve heard whenever you find out harm was done and I didn’t find that out until 2007. They [the Atlanta Falcons] tried to use the same thing on him [Michael Vick] that they did on me but it didn’t work. A lot of the stuff going on in the NFL right now, it would be easy for me to say that they took advantage of me because I didn’t know what was going on. I’m not a lawyer but they told me which way to go.”

The basis for Vanover’s complaints against the Chiefs and the NFLPA center around the allegations that the Chiefs made in their grievance. The Chiefs alleged that Vanover withheld information from them which would have altered the decision to offer him a new contract. That is an allegation that Vanover disputes to this day.

“I was the one who told my agent to call the meeting [to tell the Chiefs about the charges against him],” Vanover explained. “I felt like I was more than forthcoming with everything that was in the court documents. We kind of made a promise that some of the stuff wouldn’t come out because it had been sealed but unfortunately it did come out. I remember on that day, I called Carl Peterson on the phone and told him I said, there’s another bombshell about to drop and he said what is it and I told him what it is and he said let me call you back and the next time he called me back was to say that you’ve been released. That’s what hurt the most because I gave a lot to that organization. Nobody called me except for saying that you’ve been released. I apologize for the things I had done. I was young, dumb and I did some things that I shouldn’t have.”

If that was the extent of the ways in which Vanover had been discarded by the NFL, that would have been harrowing enough. Vanover is also one of hundreds of former players who suffer from symptoms related to brain trauma. Like many others who are part of the settlement class, he is finding that he has been abandoned a second time in the claims process.

“[The] process is very, very slow,” Vanover commented. “I think a lot of players are very upset about the fact that when we signed the deal, supposedly you were supposed to have XYZ together for it to go through. Now it’s coming to the point where you have to have ABC before you get XYZ. That’s frustrating a lot of players because we didn’t agree to that. I’m one of the fortunate ones as far as disability goes, but I hear a lot of stories about guys that are ridiculous.”

Vanover’s story in terms of the NFL is sadly all too typical, and even he realizes that his experience is more of the norm than a deviation.

“Some guys come up and they might have already had some financial backing but you have to realize that the money isn’t going to last forever,” Vanover elaborated. “I feel like a lot of guys need to know the truth about the NFL. As long as you are doing things for them, they love you, but when it’s all said and done, you are just another number.”

Vanover’s opponents on kickoff and punt coverage teams used to grasp at him in futility as he raced toward the end zone. Now nearly two decades later, Vanover feels that same futility in having anything to show for the days given to the NFL that he will never recoup. Vanover isn’t shy about looking in the mirror as far as the part his crimes played in ending his career. He just expects the NFL to do the same for its part.

Permanent link to this article: https://advocacyforfairnessinsports.org/feature-stories/nfl/tamarick-vanover-chronicles-classic-story-of-disposable-nfl-players/