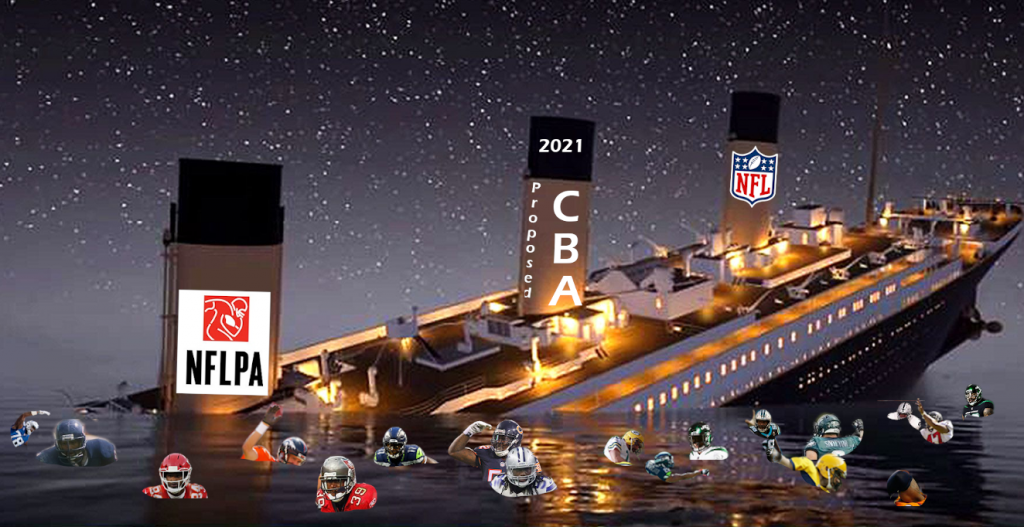 It was an interesting 24 hours.  During this time the NFL voted to adopt a proposed CBA and a vote was to be taken by the NFLPA executive committee.  Conflicting reports sprang from there.  The NFLPA’s official statement is that no vote was taken, however, according to Tom Pelissero a vote was taken and it was 6-5 against adopting the proposed CBA.

The NFLPA executive committee voted 6-5 NOT to recommend the current CBA proposal, source said. That is simply a recommendation, though. It now goes to the 32-man board of representatives.

Just as I was starting to breathe a sigh of relief, I saw this tweet from NFL Alumni and of course, you can see my reply.

Don’t be short sighted and believe everything NFL fueled media tells you and what’s written on a short summary sheet. The plan is currently trying to purge players from benefits so they’re no good if you can’t collect. They need to reject this and rebuild.

It wasn’t so long ago that players were urged to accept a settlement that turned out to be defective based on a summary similar to the one that has been distributed via the internet.  You can read it here.  While out of one corner of their mouths, NFL is promising added benefits to retirees, they’re fighting concussion settlement claims tooth and nail and purging numerous disabled from their collectively bargained disability pensions.  Nevertheless, it’s come to my attention that a well-known alumni representative sent the following message out in a newsletter on Friday.

It would be nice if true, but it isn’t.  We can’t let history repeat and fall for fanciful speculations and misrepresentations.

I can assure you that the person who sent this out hasn’t seen the actual CBA, just a brief, misleading fact sheet.  No, I haven’t seen it either, and am attempting to obtain it but right now very few people have access.  Don’t you wonder why that is and what they’re trying to hide?  Don’t you wonder why De Smith is trying almost as hard to push this through as the NFL is, even though it’s clear that most players, starting with the executive committee aren’t sold on it?

What’s needed is not a hastily done deal but new leadership in the NFLPA.  Elections are in March and there is a contingent terrified of new leaders who will challenge the status quo.  That’s the real reason the NFL and the DeMaurice Smith contingency wants this done pronto and why they’re cashing in on media favors and friendly alumni to pull out all stops.  But once it’s done, if it’s not a good deal, all players — active and retired — will be stuck with it for at least a decade, which for some, will be the remainder of their lives.

I’ve heard from several attorneys who’ve voiced major concerns.  One of the biggest which doesn’t show up on the fact sheet is a waiver similar to the one that the league tried to push on Colin Kaepernick.   A prominent labor attorney who happens to be an expert on LMRA preemption AND has beaten the NFL in court on this indicated if this goes into effect no one is going to stand any kind of chance in federal court on any issue against the NFL.  The lawyers can all pack their bags and go elsewhere and as a player advocate, there won’t be a damn thing I’ll be able to do to help either.

Groom Law Group, who has been paid over $50 MILLION in the past decade by the Plan to see that retired players get as little as possible is still very much alive, well and in the game.  Don’t delude yourselves that the NFLPA as it presently exists is independent and all these anti-retiree decisions are made against their will. 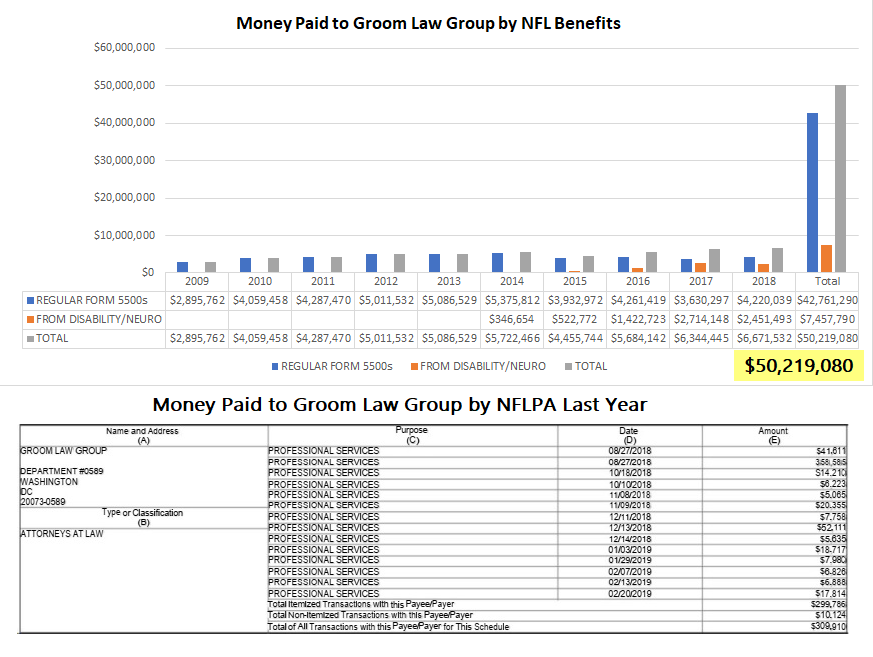 The NFLPA has repeatedly endorsed MAP doctors who have approved few if any players for disability benefits.  If you think DeMaurice Smith and those in power are looking out for retired players, consider and try to find a reasonable answer to these questions:

The NFLPA needs new leadership in place before any of the reported provisions of the pending CBA can be considered trustworthy, and this, my friends, is why the NFL is having its fire sale, desperate to get the deal done before that can happen.  We all know the sales pitch of “buy it now or the deal goes away.”  Typically the buyer is left with nothing but remorse.  Can any player afford to gamble his future and that of his family on unsubstantiated words?

What happens if that free medical care they’re promising turns out to be a re-tooling of the BAP?  What if they use the records from their chosen doctors to keep players from qualifying for any other benefits?  What happens if they corral and suppress all the data that might be gathered to slow science down and keep public knowledge of what happens to retired NFL players from reaching the public?  Don’t be so naive as to think it can’t happen, because that’s exactly what’s taking place in the NHL players’ settlement.  Don’t think the NFL didn’t keep a watchful eye as to what their counterparts on the ice were doing.

Until Thursday, I’d been limiting my time on Twitter recently, to focus on other things but in view of a CBA vote which stands to impact all players for the next 10 years, I felt it was best to man my social media post and it’s probably a good thing I did. I spent the next 24 hours or so urging caution and quite a few folks seem to be paying attention.

Unfortunately, things are not always as they seem and since the same parties who too quickly embraced the concussion settlement are pushing this proposed CBA, I felt I should address it both on and off the Twitter platform, thus this post.  Rather than recapping all of my arguments and reasoning from Twitter, I’ll simply embed a pdf of my tweets spanning the subject including re-tweets from some pretty sharp people whose opinions should carry weight.  From here, I’ll leave you to consider this considerably long and hopefully informative tweet string.

Permanent link to this article: https://advocacyforfairnessinsports.org/feature-stories/nfl/the-nfls-proposed-cba-justsayno/

NFL A Case For Josh Gordon, The Man A few more reasons Players should say no to the NFL’s CBA Deflategate lessons unlearned: Player discipline under new CBA largely unchanged Facts are Facts. Math is Math. Fans Needed! From the Wife of a Disabled NFL Player Mercury Morris: The Owners don’t want to pay benefits! NFL Owners Demand 17 Games Yet Sack Disability NFL Player Accuses Union Leaders of Bad Faith C.B.A. Negotiation NFL Players Forfeit Important Legal Rights in New CBA Open Letter to NFLPA from Ivan F. Soto, Executive Director AFLPU PAST DUE Russell Okung Continues to Fight the Good Fight The 1985 Chicago Bears: A Legacy of Glory and of Pain The Blitz Special Edition-NFL/NFLPA CBA Development Tracker The Conversation Robert Kraft Should Be Having With Gronk The NFL’s Proposed CBA – #JustSayNo The Proposed NFL CBA is a 456-Page Legal Defense Strategy Unpacking Roger Goodell’s Statement on the Death of George Floyd What’s Next in the Face-Off Between Kaepernick and the NFL? When People Show Who They Are, Believe Them. The COVID-19 Effect When the Victim Becomes the Accused: The Kamrin Moore Story Who Hid the NFL Disability Doctors? Kelechi Osemele’s Saga Reminds Us of NFL’s Toxic Culture Perspective: The NFL Doesn’t Need Headhunters CTE Risk More Than Doubles after Just Three Years of Playing Football When CTE Steals Your Dad: Garrett Remembers Mike Webster Two Stanford Alumni. Two Very Different NFLs for Andrew Luck and Amon Gordon Andrew Luck’s retirement, and pain he endured, hit close to home for former Charger Brain Injury Casts a Dark Cloud Over NFL’s 100th Season New Report Projects Minimum 10% of NFL Players will Develop CTE AAF Brings Back Fond Memories of USFL Tamarick Vanover chronicles classic story of disposable NFL players Transitioning From Sideline to Boardroom The story of Bill Cesare demonstrates how little the NFL and NFLPA do to take care of former players The Birth of an NFL Career The Story of an NFL Wife – a Conversation with Cyndy Feasel Why does the NFLPA Want to Stop Leaping Field Goal Blocks? Half-Time in the CBA – A conversation with Ben Leber Report Released By Cyrus Mehri Details Anti-Labor Stance Within NFLPA In Search of Mike Neal Cyrus Mehri’s Candidacy Reveals New NFLPA Constitution and Fresh Vision for Players’ Union How the NFLPA may have fumbled player safety