Unpacking Roger Goodell’s Statement on the Death of George Floyd 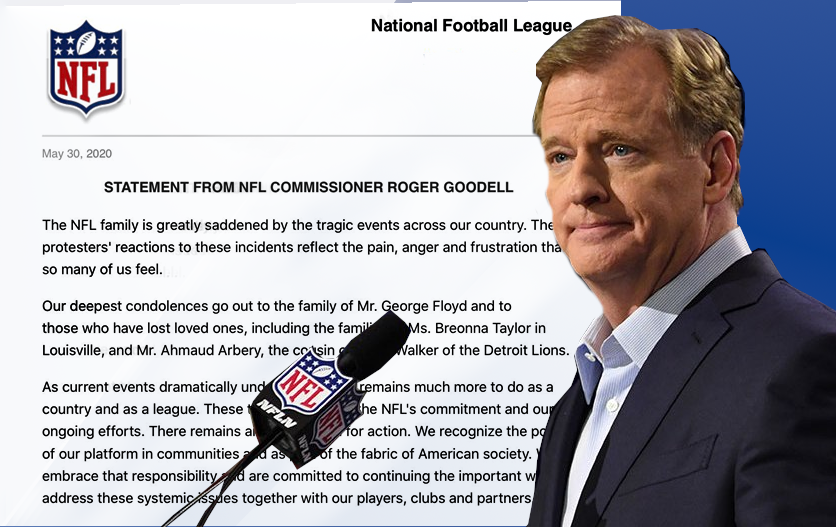 Much of America recently witnessed the cold-blooded murder of George Floyd by a police officer sworn to serve and protect.  As such we are reminded of the words of Colin Kaepernick and why he refused to stand for the national anthem four years ago. 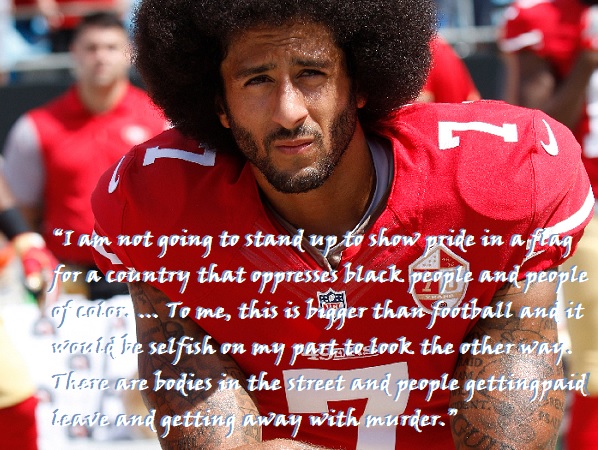 Despite how the NFL rewarded Kaepernick for his social justice stance with banishment from the league, Roger Goodell issued a statement on George Floyd’s murder because… well,…I guess they saw that just about everyone else had something to say and felt compelled to respond, since — yikes! Kaepernick was back in the news.

The league is well known for its doublespeak and strange use of words like “integrity” and is, therefore, challenging for some to decipher.  As a public service, we will recap the message along with the translation.

Roger Goodell could have thanked Kaepernick for trying to get their attention as to prevent the senseless killings.  He could have apologized for the league’s tone-deaf response.  But he didn’t.

Though they were able to keep Colin Kaepernick off the playing field, they were not able to kill the awareness he created that turned into a movement, nor could they reasonably find a way to banish the dozens of players who followed in Kaepernick’s footsteps in silent protest during the 2017 season as the Tweeter in Chief tormented them from Pennsylvania Avenue.

Eventually, they threw money at the problem as they often do when they wish to make things go away.  They settled with Kaepernick and Eric Reid who was also blackballed for a time and appears to have earned that distinction again—this time for standing up for disabled NFL retirees.

The NFL’s divide and conquer strategy eventually worked and the owners made a deal with the Players Coalition, pledging money to social justice in exchange for making the visible protests go away.  They hired Jay-Z to improve their social justice reputations and secure talent for the Super Bowl.  Their plan largely worked.

Until now, anyway.  They probably didn’t anticipate a video in which most of America would see with their own eyes how police officer Derek Chauvin for 8 ½ minutes pressed his knee into the neck of George Floyd as he lay handcuffed face-down on the pavement, gasping, “I can’t breathe,” until his consciousness faded and his body lay lifeless in the street.

LeBron James posted a photo of Chauvin kneeling on Floyd’s neck beside one of Kaepernick kneeling in peaceful protest that soon went viral.

As editorials sprang up in dozens of newspapers across the land recalling how Kaepernick tried to tell white America, Roger’s 32 billionaire bosses must have gone ballistic.

The owners must have stared in wide-eyed disbelief as they read a CNN op-ed by the league’s former executive vice president in charge of communication, Joe Lockhart, stating, “I was wrong. I think the teams were wrong for not signing him. Watching what’s going on in Minnesota, I understand how badly wrong we were.”  Lockhart called on the Vikings to sign Kaepernick, adding, “It will not solve the problem of blacks and police violence. But it will recognize the problem that Kaepernick powerfully raised, and perhaps show that, with courage, real progress can be made.”

Goodell could have issued a statement strongly condemning the murder of a black man by a white cop. But he didn’t.  According to Lockhart the owners felt signing Kaepernick was risky business and no one was willing to take the chance of plunging themselves into the racial discussion, even if they secretly agreed.

According to Lockhart, Goodell was personally in favor of bringing Kaepernick back into the league.  You’d never know it from his public statements, however.  Once again Roger Goodell demonstrates how he earns the big bucks by deflecting attention from his 32 bosses who call themselves owners and still deal in human trade.

The NFL has shown time and again its indifference to human life.  When Goodell spoke of the power of the NFL platform, he wasn’t wrong.  Sadly, instead of using their platform for good, it has been used to demonize a man who’s only thoughts were to giving a voice to the voiceless and putting an end to tragic deaths like those of George Floyd, Breonna Taylor, and so many more.

The NFL for years used bogus science to silence the risk of brain injury to its players and continues to influence research in ways favorable to the NFL even today.  This year the NFL demanded a 17th game while gutting disability for those whom the game has damaged, portraying them as hucksters gaming the system.  It’s telling that De Smith’s NFLPA acceded to every demoralizing demand despite disapproval by the executive committee.  It strongly appears that the NFL has commandeered the executive leadership of the players union, brokering the two most league-friendly CBAs in the history of sports while continuing to devalue its players and endorsing “social justice” initiatives that shear a young man’s dreadlocks in an apparent effort to make him “less black.”

It’s refreshing to see more white players taking a stand against systemic racism.  It’s also encouraging to see that some have used their voices to uplift the former players who are disabled and have been a target of the NFL for years.  I hope that some lessons will be learned and engrained this time around.

A leopard never changes its spots.  The NFL leopard has proven itself time and time again, spinning the narrative every which way but straight.  Players had a chance to alter the balance of power as Kaepernick’s peaceful protest spread, had they stood together unified in a just cause.  Instead, they failed to see through the NFL’s tried and true, wash, repeat, and reuse strategy of divide and conquer.  It is my hope that more and more players will open their eyes and unite.  If they do there is no limit to the good that can be accomplished.

Permanent link to this article: https://advocacyforfairnessinsports.org/feature-stories/nfl/unpacking-roger-goodells-statement-on-the-death-of-george-floyd/