While the world watches the World Cup, the view has been carefully crafted 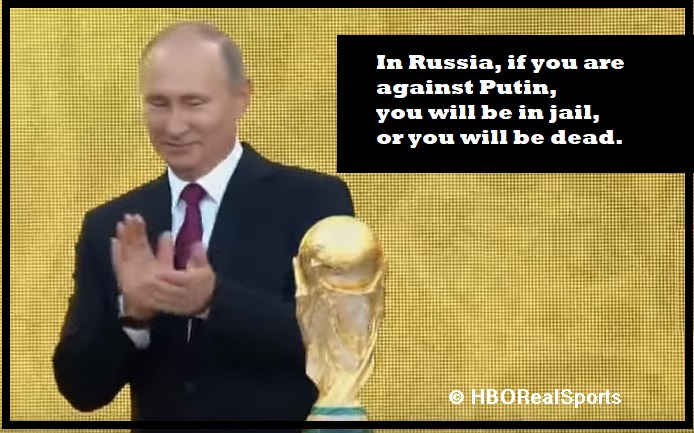 The premiere competition of the beautiful game is currently occupying Moscow. While the city is running dangerously low on alcohol already, that’s not the only danger posed in Russia in regards to sports.

The latest episode of HBO’s Real Sports with Bryant Gumbel details how the Russian government has squashed domestic journalists who have challenged the practices of the nation’s sporting industry. The methods have included everything from harassment to assassination.

“The Purge,” which aired on Tuesday, June 19, included an interview with former Russian journalist Leonid Martynyuk, who is now living in the United States of America for his own protection.

Martynyuk fled Russia over three years ago, after working on a report that claimed Vladimir Putin’s government stole the equivalent of $26 million to fund the infrastructure for the 2014 Sochi Winter Olympic Games. After being jailed, he decided to leave for the USA under cover of darkness.

“I was thinking that I am not safe here in this country. Maybe next time, I will be in jail for ten months, I said, or ten years,” Martynyuk said.

Shortly after his exit, one of the individuals he worked with was imprisoned and remains there. The third man behind the exposé, Boris Nemtsov, was murdered outside the Kremlin. This kind of silencing of Putin’s critics hasn’t been isolated to the 2014 Games either. Individuals who exposed Russian doping and the insinuating cover-up have faced many of the same consequences. It’s also continued with the current World Cup.

The episode continues to say that journalists who have been critical of the government’s handling of the World Cup have been beaten, had their electricity cut off and jailed.

Like any sporting event of this magnitude, there is more going on than just the action on the pitch. Corruption and FIFA have a long history together. Corruption in the Russian government isn’t limited to the realm of sport. The players and managers who have worked so hard for so long to get to this stage deserve support from fans.

At the same time, the reality of the dark underbelly in Russia that is thriving because of events like the World Cup has to be acknowledged. “The Purge” does exactly that, and all fans of the beautiful game need to educate themselves about how their favorite sporting event has been twisted to serve the purposes of a totalitarian ruler so they can assess for themselves how to handle this situation.

Permanent link to this article: https://advocacyforfairnessinsports.org/feature-stories/soccer/while-the-world-watches-the-world-cup-the-view-has-been-carefully-crafted/

Soccer While the world watches the World Cup, the view has been carefully crafted
Free Introductory Dog Training Workshop
A first-of-its-kind online workshop that helps you to housebreak your dog, stop bad behaviors, and train them to become as obedient as service dogs, using the same secret methods used by service dog trainers
Learn More