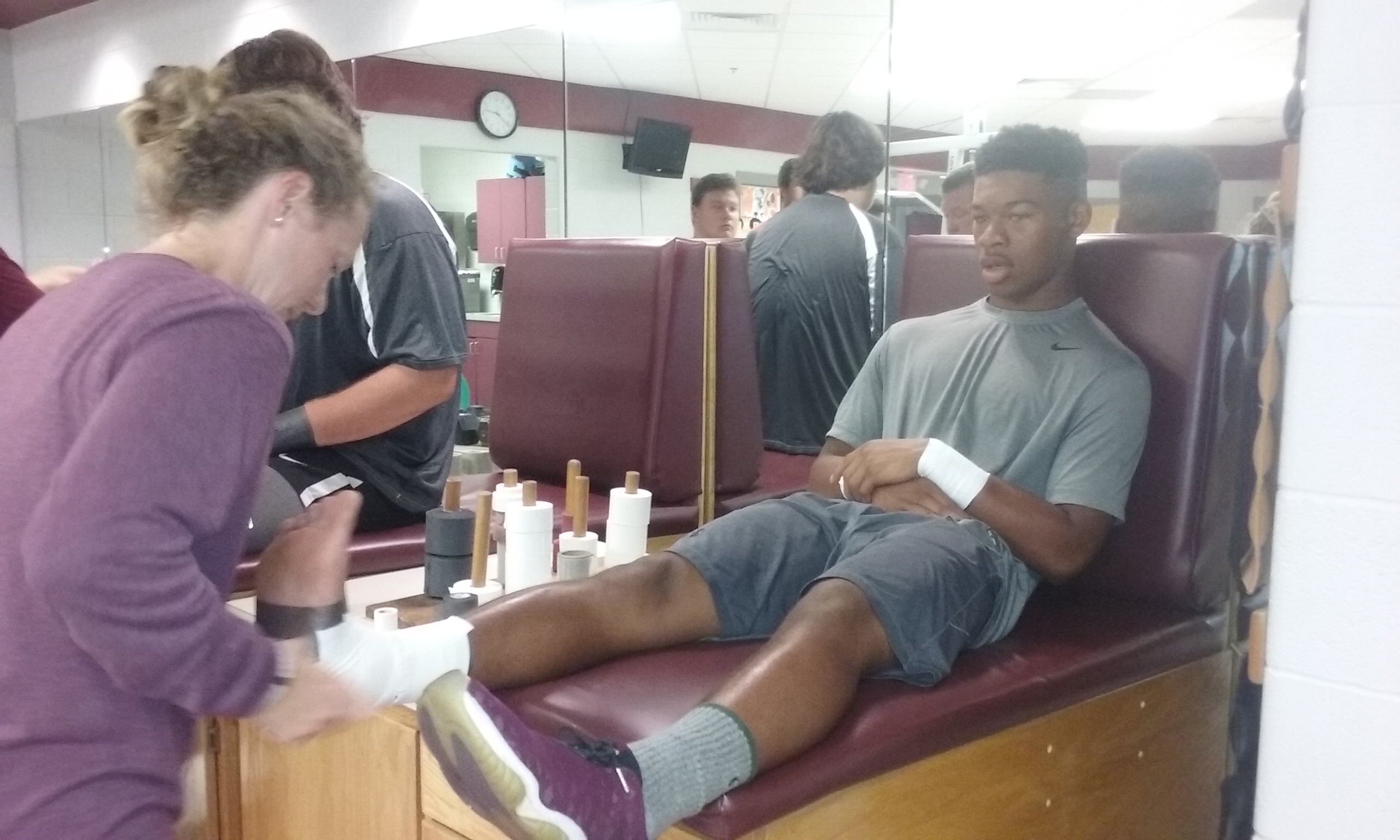 High school athletics develops many desirable attributes including teamwork, leadership, determination, and self-confidence, but along with these positives come safety concerns, and this is troublesome for many parents when considering whether or not their child should participate in sports.  Because of its inherent nature as a potentially violent contact sport, football has faced a great deal of recent scrutiny in the media, and that of course, has tricked down to the home and dinner table as a topic of debate and discussion.

It is easy to become alarmed when you read about high school kids dying on the field, but this also needs to be placed in perspective.  Over 7 million students in America participate in high school athletics every year, and about 1.1 million of these student-athletes play football.  Eleven football-related deaths were reported nationwide in 2105, equating to a 0.00001 percent chance of being involved in a high school football fatality.   While the risk of is small – and certainly every human loss is tragic, at least seven of the eleven high school football-related deaths reported in 2015 could have likely been prevented by the presence of a professional athletic trainer. 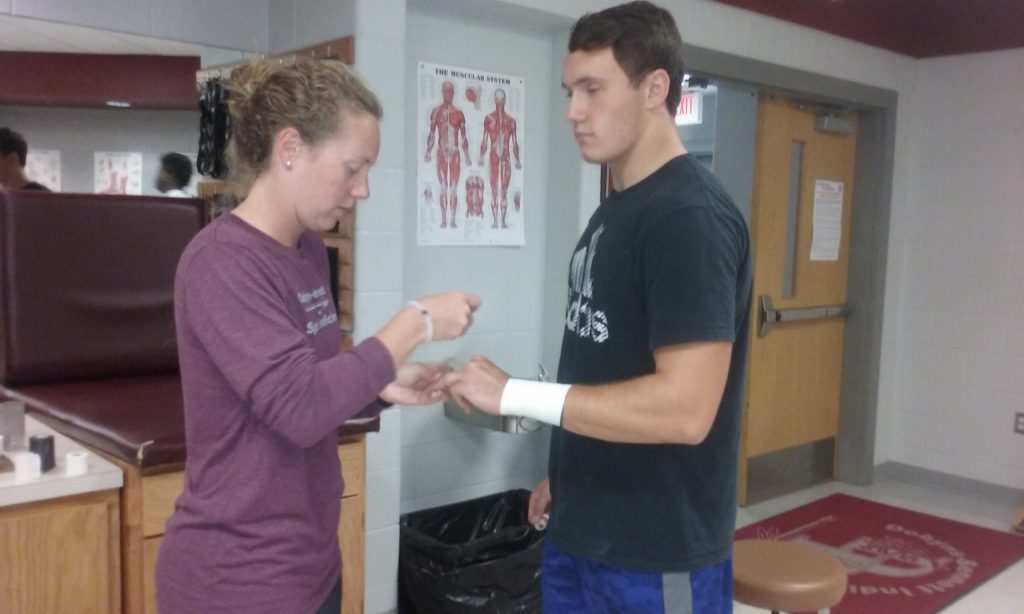 As with James Buchannan, much of what trainers do is proactive.

This is an area in which Kingsport, Tennessee and the Tri-Cities by extension excel, and could even be described as a pace-setter.  According to the National Athletic Trainers’ Association, nationwide, only 55 percent of athletes at public secondary schools have access to a full-time athletic trainer, and just 37 percent of public high schools have one.  Tennessee is well above par at 75 percent.  According to Caitlyn Horn, one of two full-time athletic trainers, alongside Kevin Trivette at Dobyns Bennett High School, each public high school in the Tri-Cities employs at least one professional trainer for their athletics program.

Of course, when contact sports are involved, injuries will inevitably occur.  Horn stated that most of the injuries she’s seen involve the leg, somewhere between the ankle and the knee. This observation is consistent with a study done by the Research Institute at Nationwide Children’s Hospital’s Center for Injury Research and Policy in Columbus, Ohio, which states: Much of what the trainers do is proactive.  They do a lot of “pre-hab” as Horn called it.  Bodies are conditioned and protected as much as possible in preparation for athletic participation.  Two of the football-related deaths reported last year were attributed to heatstroke.  The state of Tennessee, through the Tennessee Secondary School Athletic Association, has specific standards in this regard.  The rules require coaches to check the heat index every 30 minutes and stop practice immediately when it reaches 105°.  This rule is stringently followed in the Tri-Cities, and because trainers are present to oversee practices approaching this cut-off, and identify players at greater risk, local teams are very effective in monitoring athletes and keeping them hydrated according to Horn. 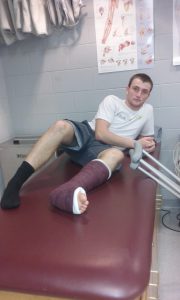 Caleb Whetsel’s Maisonneuve fracture is the most serious injury Horn has seen as an athletic trainer.

This too is consistent with what I discovered in speaking with some of the Dobyns Bennett football players.  One of the players who spoke to me was in the process of reconditioning following an ankle sprain, while another player, Caleb Whetsel is recovering from a Maisonneuve fracture, a type of spiral fracture of the fibula.  Both of these injuries occurred during a tackle.  Horn, says the Maisonneuve fracture is the most serious injury she’s witnessed in her time as a trainer.  It seems Whetsel’s in very capable hands though.  He was injured during the game on September 9, had surgery the following Wednesday, and is already back with the team, keeping his body in shape and his mind focused on recovery.  Whetsel showed me X-rays from his injury and a video of the play in which he was injured and seems quite undeterred from moving forward in his athletic pursuits.  While Horn stressed that he’s definitely out for the remainder of football season, he should be one-hundred percent in time to participate in his other passion – baseball.

Dobyns Bennett’s athletic training room looks much like a state of the art physical/occupational therapy facility with a variety of equipment for strength, flexibility, and cardiovascular training as well as providing for various treatments including heat, cold, and electrode therapies.

A serious concern in the world of contact sports is that of concussions.  Litigation is ongoing with former NFL, NHL, NCAA and even Pop Warner, players suing for damages and concerns are even more acute at the high school level where athletes’ brains are still growing and developing.  This is a major focus for the training staff.  Players are carefully watched and monitored for signs of concussion but perhaps even of more importance, players are taught to recognize the signs of concussion, with large prominently displayed posters describing symptoms that remind players to speak to a trainer if they suffer any of them.

Students are cautioned not to risk their health, their futures or even the future of their sports participation on a single game.  The element of trust between players and training staff is essential in making this work, and it seems to be doing just that – working.

One player I spoke with told me he suffered a concussion in a game two weeks ago.  He went through the concussion protocol mandated by the State of Tennessee which dictates that if a player suffers a concussion, he is to be removed from play and full-contact practice for six days.  This rule is stringently followed but sometimes it takes a brain a bit longer to heal and that’s where the trust factor comes in.  The player I spoke with told me he was released to play after going through the protocol, but once he returned to practice he began having headaches.  He reported this and is now out for this Friday’s game, but is in a much better position to prevent Second Impact Syndrome and finish the season healthy.  Second Impact Syndrome results when a second concussion is suffered prior to recovery from an initial concussion.  The risk of long-term problems is much greater with Second Impact Syndrome than with the first concussion and has been linked by researchers to early-onset dementia and Chronic Traumatic Encephalopathy (CTE).  The good news is that with both players and staff paying attention, the likelihood of long term damage is greatly negated.

At the beginning of this article, I mentioned some positive attributes that are developed as a result of sports participation.  Another attribute to be added is perseverance.  Injuries play a role here but in a manner different from the past.  No longer are student-athletes ridiculed for succumbing to injury and told to tough it out, but instead, perseverance is developed through intelligently dealing head-on with injuries and together with the coaching and training staff patiently working to minimize the damage while continuing development in spite of adversity.  Tri-Cities schools are setting a shining example of what can happen in sports when you do the right things

Note: This article was originally written on September 23, 2016, and scheduled for publication in Kingsport Times-News.  Thanks to the Dobyns Bennett athletic staff and athletes for assistance and cooperation!

Permanent link to this article: https://advocacyforfairnessinsports.org/feature-stories/youth-sports/dbathletics/