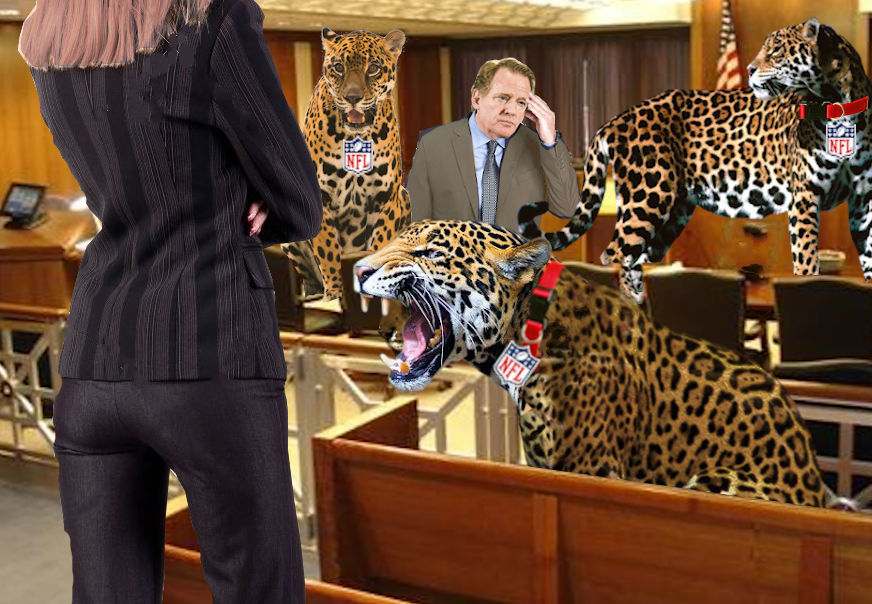 The NFL has shown time and again that it’s a leopard that never changes its spots.  In response to an appeal by a nine-year defensive lineman who was diagnosed with severe dementia at the young age of 33, the NFL has continued to repeat the same numbing refrain that it has for the better part of three years in its quest to stop dementia claims in their tracks, especially the claims of younger players, whom the NFL doesn’t want to admit are damaged, nor does it want to pay the high-dollar awards that younger claimants qualify for.

In “Courtroom or Leopard Lounge,” I attempted to go point-by-point demonstrating how the NFL’s most recent brief contorted Amon Gordon’s claims and, instead of addressing the issues he raised regarding his thrice approved claim that was suddenly denied when the NFL took a fourth bite at the apple, totally distorted them.  I went through prior briefs filed on behalf of Gordon by his attorney Wendy Fleishman of Lieff Cabraser and only made it through a few points the NFL was so incredulous.

Instead of taking the Leopard’s bait and refuting their arguments one by one, as I attempted to do, Fleishman addressed the spotty-substance of the NFL’s brief in one concise sentence before going on the offensive against their dubious claims.

The focus of Fleishman’s response brief cuts clearly to the issues at hand and the standard for reversing a decision on appeal.

“Clear and convincing” is the evidentiary standard agreed to for the concussion settlement claim appeal process.  It’s a much higher standard than a preponderance of the evidence typical of most civil proceedings and just below the criminal standard of “beyond a reasonable doubt.”  From a different claim appeal, Fleishman submitted the Special Master’s own description of  “clear and convincing,”  and states that he did not apply his own reasoning to Gordon’s claim. 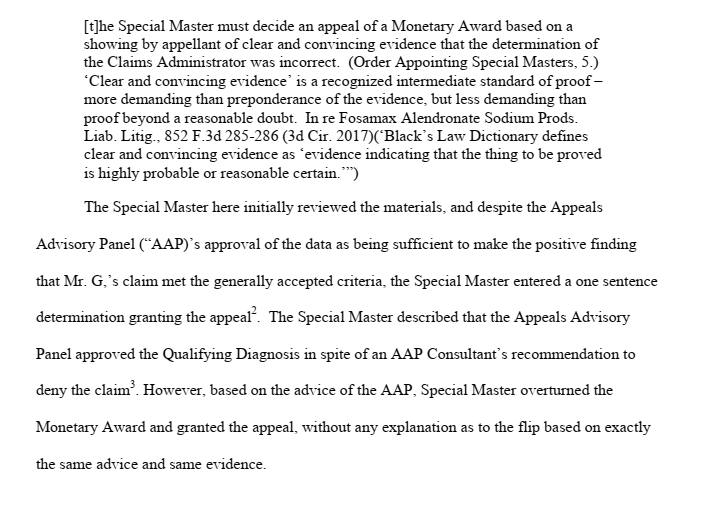 On Gordon’s appeal, Fleishman points out that the Special Master never justified how he was “reasonably certain” that the claim approval had been in error unlike his findings in the other Special Master’s decision she submitted as an exhibit. or his initial finding on Gordon’s claim, or why one AAP doctor was more influential than the rest of the panel.  Instead, the Special Master wrote:

This completely flies in the face of Gordon’s lengthy and extensive medical record.  Fleishman pointed out that on his first review of the same medical records the Special Master found them to be generally consistent with the protocols of Exhibit A-1 to the Settlement Agreement.

In “Courtroom or Leopard Lounge?” I stepped through the medical evidence submitted for Gordon’s claim, demonstrating how it clearly meets the generally consistent standard that the NFL deceitfully claims Gordon was trying to bypass.

The only conclusion one can possibly draw from the Special Master’s denial is that he equated “generally consistent” with “identical” on his second review instead of using his own standard, written into the settlement FAQs as having more commonalities than differences, as well as the distinction made in the actual settlement agreement.

The only explanation provided by the Special Master was this short paragraph that claims Gordon didn’t meet the criteria, without explaining how, since his records clearly show the opposite

First of all Gordon’s records, maintained by the highly respected board-certified neurologist, whose care he has been under for several years noted a steady cognitive decline and a decline from a previous level of function which is the bar set in the settlement agreement.  So did neuropsychological testing.  The Special Master wrote that Gordon didn’t meet the “definite impairment of function at home, more difficult chores abandoned; and/or more complicated hobbies and interests abandoned.” 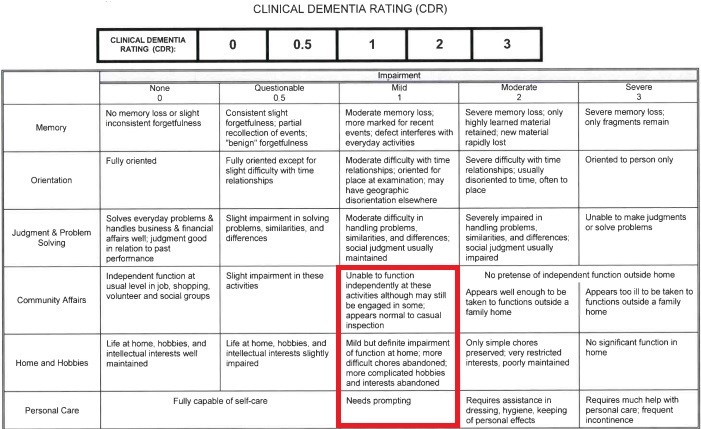 While the Special Master quoted the correct standard, he seemed to apply the requirements in 2 or 3 which is the bar for a Level 2 claim and not Level 1.5 claim.

Affidavits show that Gordon’s wife has had to fill the roles of mother and father to their son, taking him to all of his school and athletic events.  Once an avid reader and scholar, Gordon is unable to concentrate and take pleasure from literature that he previously did.  He no longer cooks because his wife fears he’ll be distracted and start a fire.  This seems without a doubt to meet the home and hobbies criteria.

Regarding personal care, his wife frequently has to remind him to shower, shave or comb his hair, which seems to indicate that he “needs prompting,” meeting the personal care bar for claim approval.

No attempt was made to explain why these difficulties combined with his decrease in cognitive function fail to meet the requirements, even for a preponderance of the evidence standard, much less how they could possibly meet the clear and convincing standard that is required to overturn an approved claim or reverse a prior denial.  The burden is on the appellant—in this case, the NFL, and it seems the only way the requirement was met was not by applying the evidence and by beating the drum demanding that every single element of BAP protocols must be met exactly, thus rewriting the settlement agreement if permitted to stand and enforcing on players who received diagnoses prior to the settlement a protocol that didn’t even exist at the time they were diagnosed. 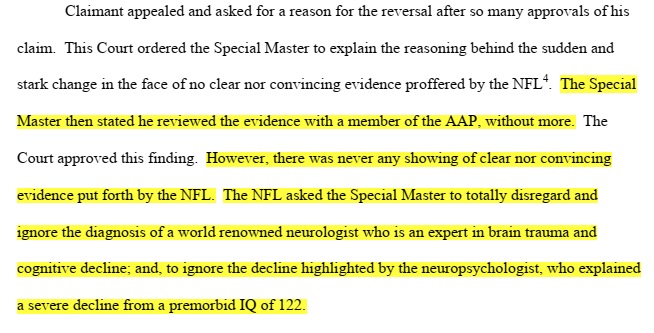 This wreaks of an authoritarian, saying “because I said so,” without giving any logical justification for the demand.  In Gordon’s case, there doesn’t appear to be any justification that could possibly be articulated and that is most likely why the Special Master failed to elaborate.

Fleishman is correct.  How could the clear and convincing standard, described by the Special Master as “reasonably certain” be met when two different conclusions by the same person based upon the same evidence occurred?  “The Special Master’s inexplicable findings should have been overruled by this Court,” Fleishman, goes on to write.

While this is standard operating procedure in the NFL’s disability plan, the court owes a responsibility of candor to the people who accepted the settlement approved as “fair, reasonable, and adequate.”  There is no fairness in siding with a defendant who perhaps has buyer’s remorse in that more claims have been approved in 3 years than the NFL anticipated funding in 65.  That isn’t Amon Gordon’s fault and his claim should not be a casualty of the NFL’s warped attempts to mitigate its damages.  It was made clear from the beginning that signing onto the agreement constitutes a “final sale.”

As Ryan Boysen wrote for Law360, the case is now “teed up for ruling.”

Fleishman has essentially said, “show me your evidence or reverse this error,” and has indicated additional evidence in support of Gordon’s claim should she be permitted to present it to the court.  More bluntly, “put up or shut up.”

Judge Brody must now decide if she will issue an indicative ruling that would bring jurisdiction back to her courtroom and permit her to correct the error, or if she will continue to allow the leopards to go unchallenged by those charged with rendering justice to those they prey upon.  At the very least,  since the NFL, tried to back Fleishman into a defensive posture, regarding Gordon’s claim and seeing her bypass their attempts to distract and go on offense instead, has likely left their expressions a bit less s serene as when they smugly filed their own brief.  Judge Brody remains the wildcard.

Should Judge Brody fail to rule affirmatively for Amon Gordon, the next stop will be the Third Circuit Court of Appeals, where if the case is accepted, it could be a game-changer for those suffering from dementia who have been unfairly denied