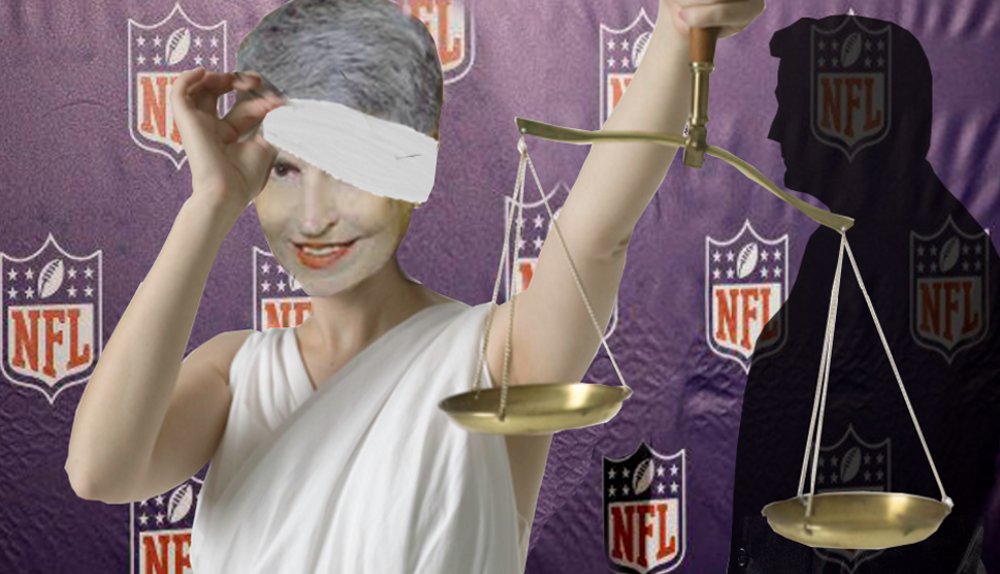 Last Friday, Locks Law Firm, on behalf of itself and thirteen other appellants, filed a 68-page brief contesting Judge Anita B. Brody’s allocation of common benefit attorney fees to the Third Circuit. The brief was authored by University of Pennsylvania School of Law Professor Tobias Barrington Wolff.

The appellants question the district court’s lack of transparency and absence of due process in delegating recommendations to Chris Seeger, the party with the most to gain by deflating the time valuations of other firms.

The appeal addresses both the allocation of common benefit fees as well as court-imposed limitations on the fees of independent counsel that were capped at 22% minus a 5% holdback for class counsel that all firms aside from Seeger Weiss opposed.  The court’s cap on individual attorney fees effectively reduces their compensation to 17% of awards they recover on behalf of injured retired players while further rewarding Seeger Weiss, who has already received the lion’s share of the $112.5 million the NFL agreed to pay outside the monetary award fund structure. 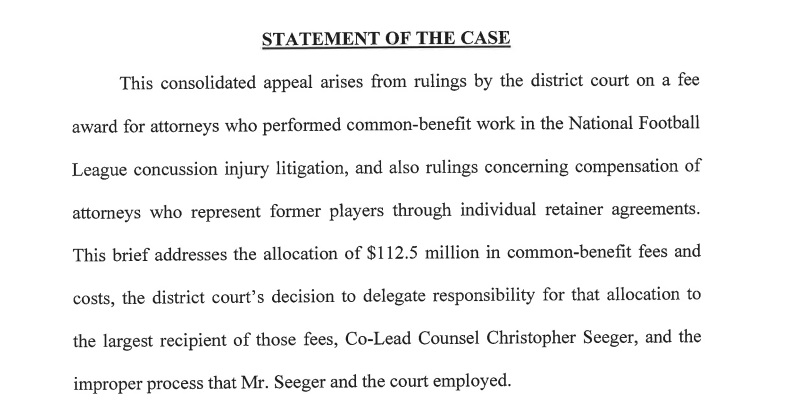 The brief then gives a brief history of the settlement, emphasizing how each of the firms supported it and contributed toward its adoption and approval, but from the beginning, they plead that they never saw a level playing field. 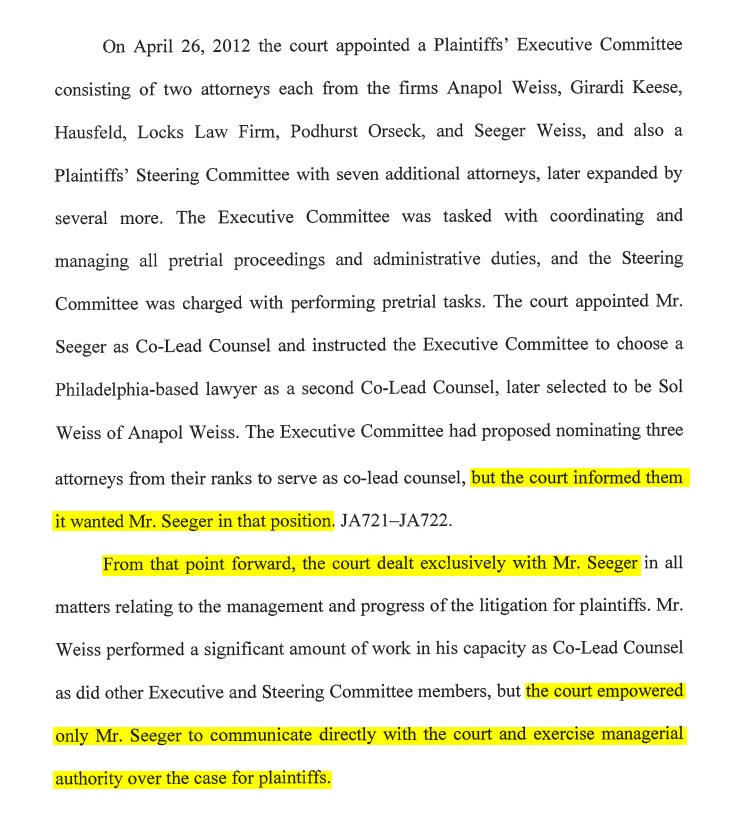 Very little has changed since that time, aside from the court veering further and further from all firms except the one hand-selected by Judge Brody even in advance of the formation of the committee and perhaps even the MDL. Above the Law reported in 2012:

For example, Judge Anita Brody (E.D. Pa.), in appointing Seeger Weiss as co-lead counsel in the NFL players’ concussion injury litigation, commented on the record that “I would very much like one of co-lead counsel to be Mr. Seeger, Chris Seeger. I have to tell you, the ratings of people who have had MDLs [multidistrict litigations] with you involved have been very, very high, your law firm.”

Finally, in May, she unceremoniously fired all other class counsel after a hearing in which Gene Locks and David Langfitt challenged an order issued by Brody which changed the fundamental dynamic of the settlement.  This was the first hearing since implementation of the settlement began in which attorneys other than Chris Seeger were permitted to address the court regarding the claims process, and the hostile tone throughout that hearing followed by the abrupt termination of the other lawyers only underscores her decision to deal with no other attorney, despite the fact Seeger is less entrenched in the day-to-day challenges players face due to the fact that he represents few players individually.

The brief goes into detail about how Seeger unilaterally disallowed hours the other attorneys felt they should be able to claim and how their efforts contributed to the final settlement and assigned multipliers much lower than they felt they deserved, all of which were less than half the multiplier he assigned to himself.  It’s certainly no surprise the attorneys feel they were short-changed.

Accompanying the opening brief, Locks submitted thirteen volumes of appendices spanning more than 9,000 pages to support the attorneys’ position.  One of the more interesting entries is found in a transcript beginning on page 34 of Volume XIII.

While it may not be surprising that Seeger sought to maximize his value and earnings, judges are thought to be considered neutrals willing to listen to all parties in a dispute and find a fair solution.  This is not how Brody came across, as she was often dismissive of the other attorneys, at times bordering on rudeness.  The following are examples of some of the exchanges at the May 2018 hearing.

Gene Locks had just announced that Professor Tobias Barrington Wolff would be arguing on behalf of his firm.  Seeger pointed out that the professor isn’t a member of Locks Law Firm, which seemed to raise a question in that Judge Brody had apparently denied access to outside counsel to two firms that she referred to as “a problem.”

First, it’s not uncommon for a law firm to bring in outside counsel such as a law professor to argue on their behalf.  Seeger brought in Professor Samuel Issacharoff to argue on his and the class’s behalf when he found it appropriate or beneficial.  Second, why is a judge openly referring to two firms or attorneys as problems in open court? This doesn’t demonstrate any semblance of neutrality or an open mind.  Imagine going up to argue in front of a judge who’s already referred to you as a problem before you’ve uttered your first word in her courtroom.

Professor Wolff is asked to introduce himself because Judge Brody has “no idea” who he is.

You either know the man or you don’t, but is this even relevant to hearing his argument?

Professor Wolff argued that Locks Law Firm had been given a much lower multiplier than other class counsel for no apparent reason and also addressed that paralegal time devoted to research on behalf of the class was disallowed for Locks but in other instances, paralegal time was allowable for reimbursement.  Wolff also addressed the lack of transparency in the process to which Seeger responded:

Why did Judge Brody just apologize?

Seeger continues to take issue with Professor Wolff arguing on behalf of Locks Law Firm when in fact, he’s made use of law professors to conduct arguments on his behalf rather than simply addressing the substance of Professor Wolff’s arguments.

After Seeger rebuts Professor Wolff’s arguments, Judge Brody responds, referring to Seeger as the “face of the Class.”

She also notes hearing from Professor Issacharoff, so when is hearing from a law professor permissible and when isn’t it?  Brody states she’s heard only from Seeger and Issacharoff, but this was of her own design since she refused to hear from any other attorneys.  Perhaps Mr. Locks felt you had to be a law professor to get her attention?  This isn’t the first time Judge Brody has referred to Seeger as the “face of the Class;” and this is a statement numerous class members have taken issue with since the settlement was purported to be about and for the players who should have been viewed as the faces of the Class.  After being mistreated by a league that views them as disposable, it must be disheartening to feel the court views you the same way.

Attorney Bruce Hagen is discussing the teamwork aspects of the settlement and the importance of the PR strategy.

Really? After putting preemption and causation fright into the heart of every plaintiffs’ attorney?  Obviously, time has shown the league had nothing to fear.

Gordon Rudd of Zimmerman Reed is next up.

Why is the judge making fun of this attorney’s name?

Mr. Rudd details the casework and the risk undertaken by his firm in filing numerous early lawsuits that became the MDL that resulted in the settlement. 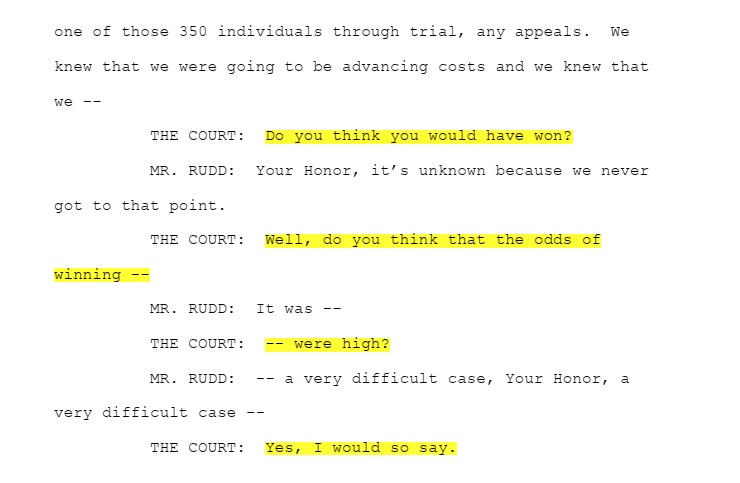 And it was the NFL that was afraid of her?

Attorney Derriel McCorvey, who has the distinction of being the only African American and the only former NFL player to play a leadership role is presenting his arguments.  He is objecting to Seeger’s unilateral fee allocations and suggested this should have been done by committee or at least under the oversight of a special master. 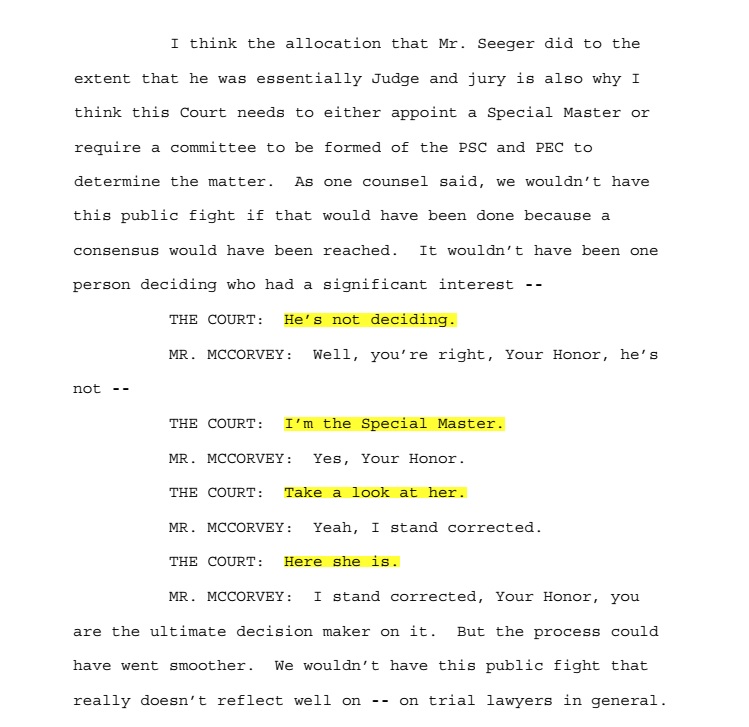 Nothing like taking a few jabs at an attorney trying to present his argument, although she does back up a couple of steps to justify her assessment.

Judge Brody justifies her decision based on her “face of the settlement” argument however circular since these were the only faces she wanted to hear from.  She promises to reevaluate, but in the end, accepted each and every recommendation made by Seeger outside making an adjustment for uniform hourly rates.

Faneca Objectors led by attorney Stephen Molo was instrumental in achieving added value to the class, not the least of which was lifting the cap on the BAP and inclusion of NFL Europe; their objections are clearly documented but Judge Brody doesn’t recall. 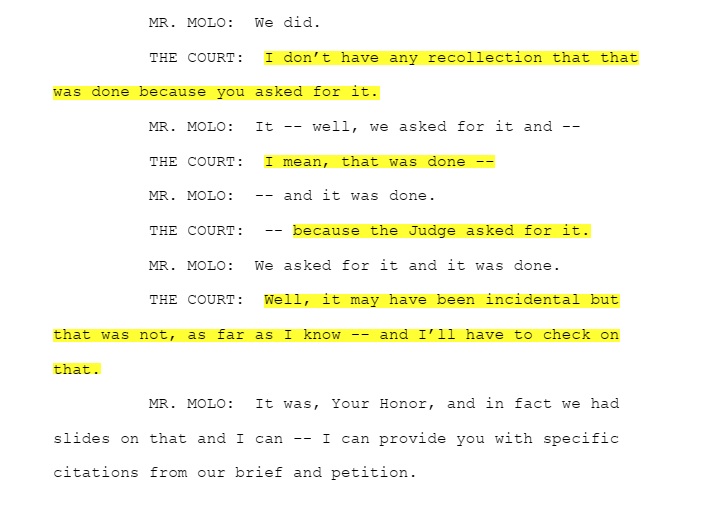 The exchange continues. Molo’s briefs and objections are well documented but Brody refuses to concede, leaving Molo in an awkward spot. 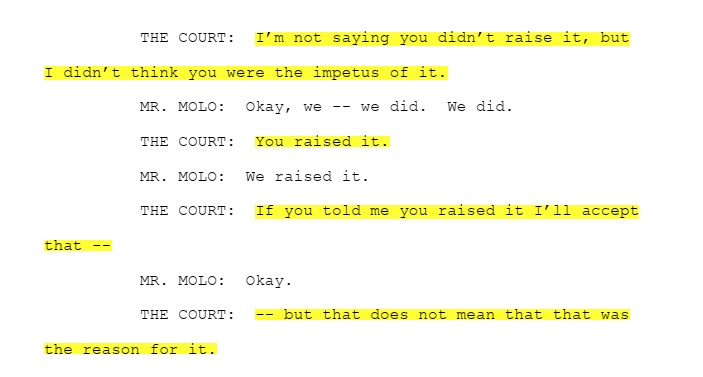 Back to the Brief

Locks recounts how the figures submitted by firms were unilaterally adjusted, with the assistance of a law professor, no less. 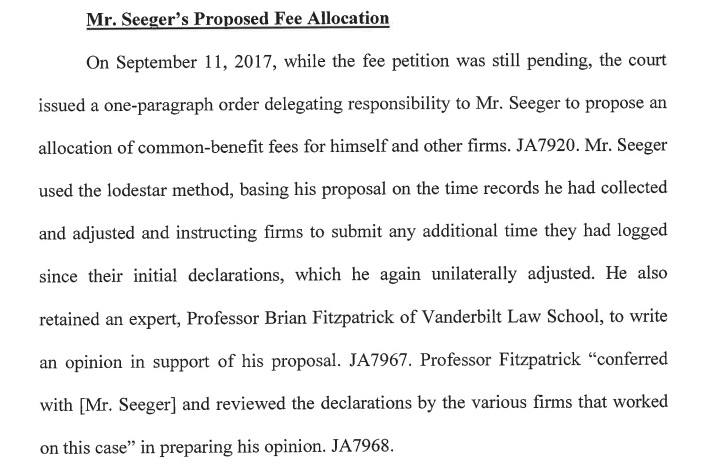 Locks then recaps the objections to the petition and summarize the hearing, hitting on many of the same points I elaborated on. Not a single point brought up by any of the attorneys appears to have been considered, which based on the tone of the hearing, is less than surprising. 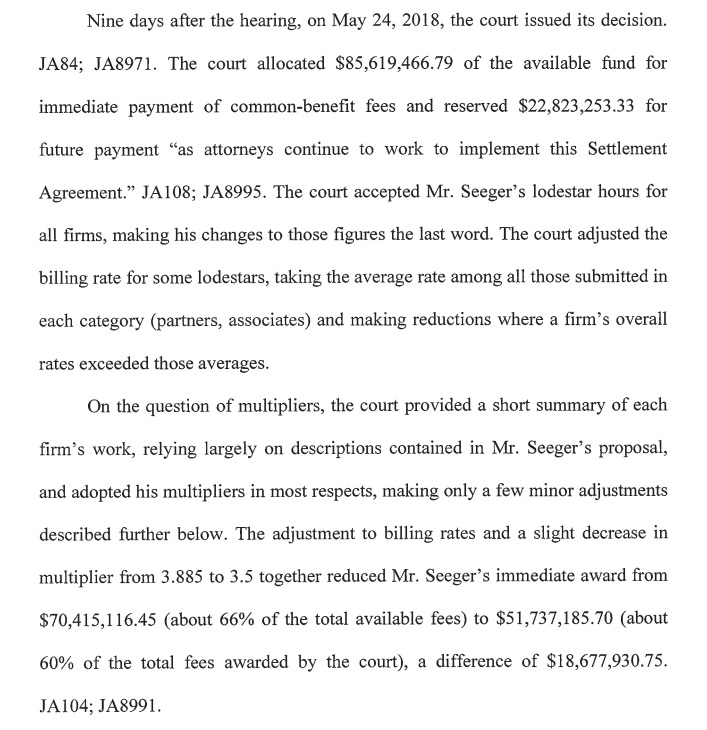 The attorneys argue that not making Seeger’s timesheets available for scrutiny violates due process citing Brody’s deferral to Seeger in the hearing in which she said more than once that he knew the case better than she and was in a better position to evaluate.  The attorneys wonder why the fox was left unsupervised to guard the henhouse in contrast with the rules Brody established for working out fee disputes among independent attorneys with Magistrate Judge David Strawbridge sitting as a neutral.

Numerous examples were given as to how various perspectives tend to influence which contributions are valued and how much, but the court never offered transparent or remotely democratic process for resolving the differences.  Also applicable to the claims process that has worked for players suffering from neuromuscular disease but been highly adversarial toward players suffering from cognitive problems perhaps this cite from U.S. v. Ciafrani says it best.

Attorney Lance Lubel also submitted a noteworthy brief also addressing the Court’s lack of transparency.  He points out that Seeger’s first fee petition was submitted before the first claim was ever submitted, much less paid. 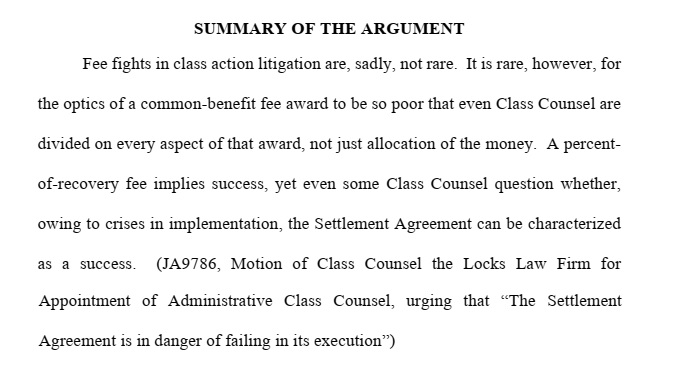 Lubel asserts the district court abused its discretion in numerous ways and neglected its fiduciary duty.  He also addresses the 5% holdback on claimant awards that was opposed by every attorney on the plaintiff side except for Seeger as well as the 22% fee cap on individual attorney fees.  Both the Locks and Lubel briefs were over 60 pages in length and well worth reading.  The Locks brief is accessible near the beginning of this article and Mr. Lubel’s brief can be accessed below.