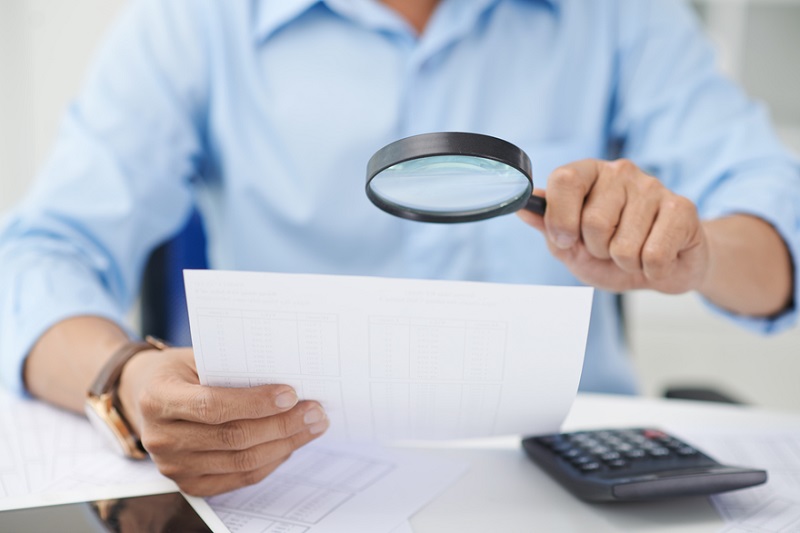 One of the unlucky Friday the 13th filings in the largely failing NFL Concussion Settlement was a motion by NFL Counsel Brad Karp requesting appointment of a special fraud investigator.

In an opposition response to a motion by Locks Law Firm requesting to share administrative duties of settlement implementation, the NFL alleged widespread fraud in the settlement and in a separate motion shown above, requested the appointment of a special fraud investigator.  This seems to be an unnecessary measure since Claims Administrator BrownGreer, working under the direction of NFL Counsel and Co-Lead Class Counsel Chris Seeger, has already subjected 46% of the approximately 1,800 claims submitted for Monetary Award under audit for potential fraud.

As I wrote in an article devoted to breaking down and refuting the NFL’s allegations, I pointed out how many of the problems in the settlement are of the NFL’s own making, in that they have accused men with legitimate disabilities of fraud in the NFL’s disability plan to the point that some players felt that a legitimate diagnosis wasn’t enough to be approved – that they needed guarantees or coaching – which led them into the snares of charlatans all to eager to take advantage of their plight. Others with legitimate diagnoses simply have records that were written by physicians not versed in writing to the NFL’s narrow scope and because certain documents didn’t exist were pushed into audit.  Others were audited because they were diagnosed with neurological impairment at an earlier age than is common in the general population.  The cases cited which actually appear to be fraudulent appear to be between 10%-15%, but even many of these cases appear to be more about men who were in the hands of unscrupulous professionals rather than an attempt by the player to defraud the system.

On Friday, April 27, four responses to the NFL’s motion appeared on the court docket.

As has become typical, for the Settlement’s Co-Lead Class Counsel Chris Seeger, he filed a response in support of the NFL.  In it he wrote:

While this is not a role defined in the Settlement structure, he “does not object” to this appointment while in a response filed to the Locks Motion this is one of the points he found objectionable.

Seeger did, however, commend the Claims Administrator in their thoroughness with audits and suggested that the NFL has, in fact, exaggerated the problem.

While still supporting the motion, Seeger did disagree with the level of authority the NFL wished to confer on the investigator, writing, “a Special Investigator should not be permitted to render any adjudication, determination, or formal findings concerning such claims. Rather, his or her role should be purely investigatory—in other words, to provide information to the Claims Administrator and Special Masters to fulfill their duties.” He also felt that ex parte communications should be limited in scope.

Seeger concluded his response by stating, “an exaggerated response to the NFL’s assertions may do more harm than good to the integrity of the Settlement and the processing of legitimate claims.”

A reading of his brief would lead one to conclude that he actually opposed the appointment of a fraud investigator but was willing to go along with it as long as the NFL appointee wasn’t overly aggressive.  Good luck with that. It’s puzzling why he didn’t just oppose the motion. While Mr. Seeger has stated in numerous briefs that he has opposed the NFL in dealings with the Special Masters, his opposition to them has not surfaced on the public docket for at least two years. One is compelled to ask, “why?”

Steven Marks of Podhurst also responded in opposition to the NFL’s request with additional reasons that the fraud investigator was unnecessary, and in fact detrimental 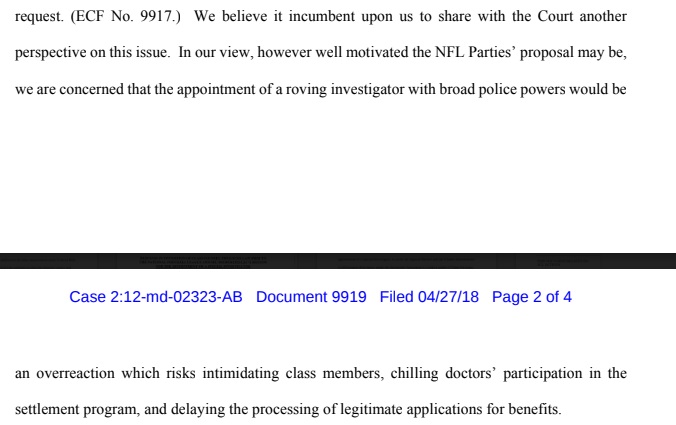 .The last statement is the elephant in the room and most likely what the NFL hopes will be the death knell of most dementia and Alzheimer’s claims.  Already the Claims Administrator has been able to red-flag a large percentage of these based on where the player was examined, the player’s age, or if they are able to find video evidence which may be used to invalidate his medical diagnosis.  The level of fear which has always been high among the players and their families is escalating to a paralyzing level. One wife told me that they really need the money but at this point nothing is worth the agony they’ve been put through and “the NFL can keep their [explicative] money!  We don’t want it.”  Of course this is the result the NFL is hoping for. 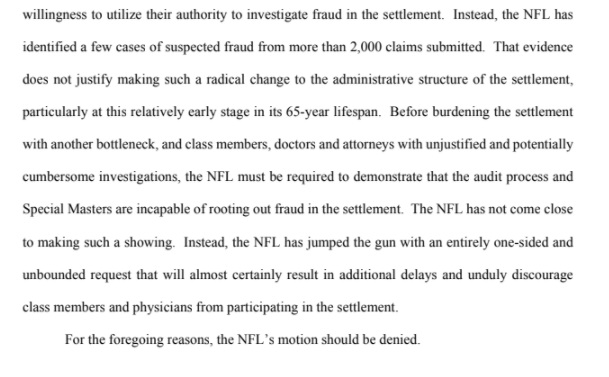 Steven Molo of MoloLamken filed the most surprising response:

Molo’s proposal is intriguing in a number of ways.  As a Settlement Objector, the firm has often been critical of Seeger’s non-aggressive stance against the NFL and their arguments won many benefits for the Class.

The benefits for the Class that the Faneca Objectors achieved, even over the opposition of Mr. Seeger were: 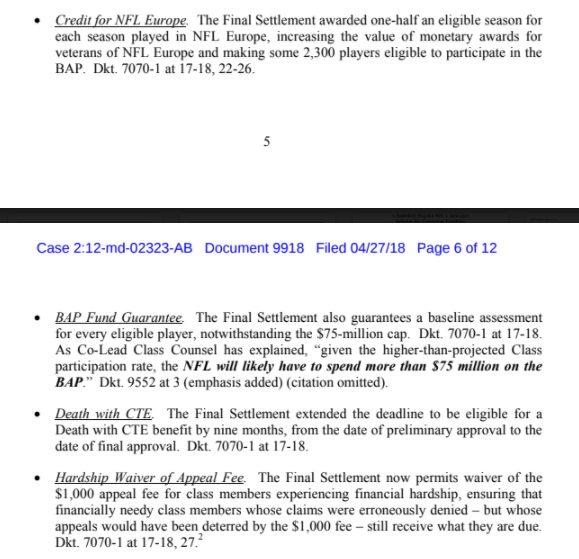 The brief cites the experts utilized by Faneca Objectors in order to achieve these goals.  Unlike Co-Lead Class Counsel who used very conservative actuaries as presented in the Vasquez Report, and relied upon known CTE skeptic Dr. Grant Iverson, the Faneca Objectors prepared reliable and highly detailed actuaries and retained eleven prominent experts in the fields of psychiatry, neurology, and neuropsychology, including Dr. Robert Stern of Boston University.

Molo demonstrates that the firm can work quickly and efficiently and compares the speed and cost efficiency between their firm and Seeger Weiss, also noting that much of Seeger Weiss’ time expenditures were in fighting the Faneca Objectors on benefits that they eventually won for the Class. 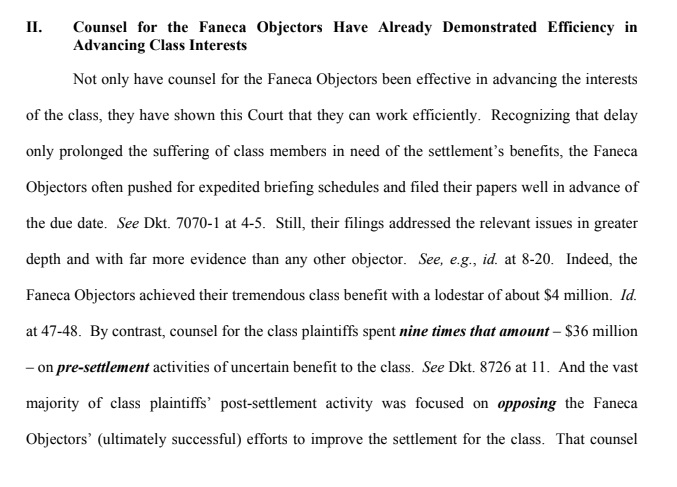 Molo notes that the firm has a great deal of “experience and know-how to uncover fraud through efficient, thorough investigations,” citing work in criminal, corporate and government investigations.

Numerous problems that have surfaced in the Settlement were predicted by Faneca Objectors, but not addressed or incorporated into the final Settlement.

“[A]ny audit process presents the potential for abuse,” Molo writes, “Thus, to be effective, any Special Investigator must demonstrate a loyalty to the fair administration of the settlement for the benefit of the class and a willingness to ensure that the NFL does not abuse the audit process as a means of denying or delaying legitimate claims.”

The NFL should be careful what they ask for.  It is highly doubtful they want MoloLamken as their fraud investigator.  In my opinion, however, it is also highly doubtful they will be appointed. Since their motions regarding the extra benefits to the Class prior to final Settlement approval, were granted, to the best of my knowledge this was the last time Judge Brody overruled any position supported by Chris Seeger, and it is highly doubtful he wants his former nemesis appointed as fraud investigator any more than the NFL.  Judge Brody recently ruled against the Locks motion, leaving Chris Seeger as the unilateral decision maker in regard to the class, and showed great concern that Locks signed off on settlement loans that some of his clients pursued, while looking the other way as Seeger has actually served on the board of directors for  litigation funder, Esquire Bank, and solicited other attorneys to steer their clients to Esquire. When attorney Craig Mitnick filed a letter accompanied by emails with evidence that Seeger has solicited his firm the documents were placed under seal by Judge Brody almost immediately. When requesting comment, Mr. Mitnick says that he has never been able to get a straight answer as to why the documents were sealed against his wishes. The lack of transparency is disturbing, especially in light of an order handed down by Judge Brody last week which appears designed to shield disagreements on settlement implementation and perhaps and perhaps the derogatory information contained therein from the public by referring them to Special Masters instead of the public docket.  Not a good look for the Court or the Settlement.