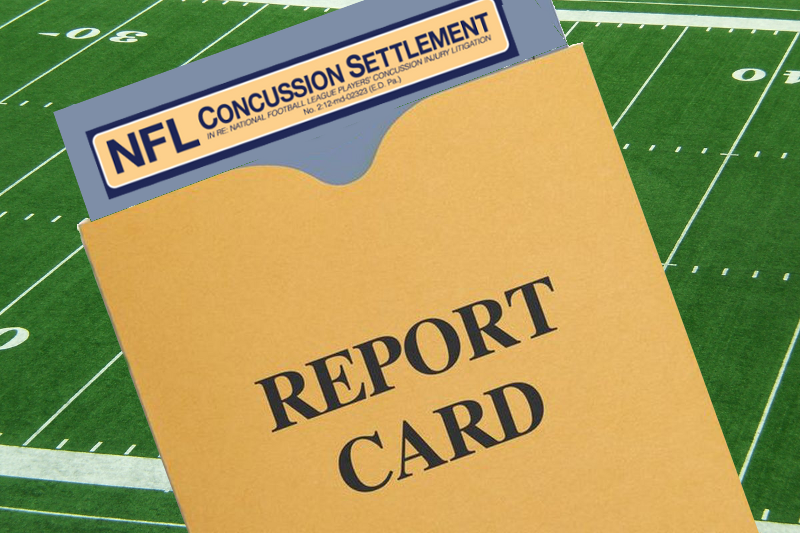 On February 15, Claims Administrator Orran Brown of BrownGreer released his fourth status report on the state of the NFL Concussion Settlement. 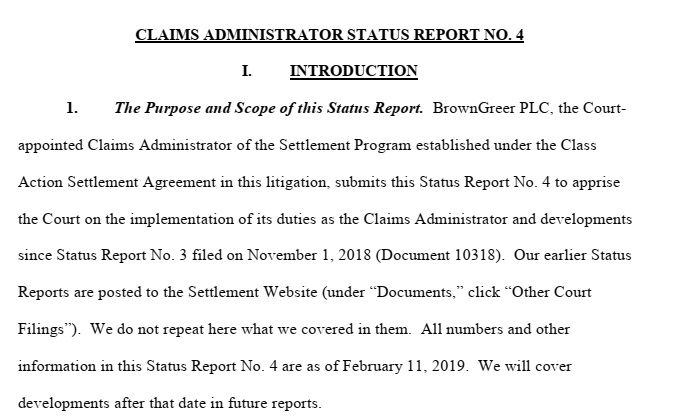 In all, 2,644 claims for monetary awards have been submitted; 594 since the last status report on November 1, 2018. From January 1 to February 3, 2019, Brown says 152 new claims were submitted, averaging about 32 claims per week. Before the spike in claims leading up to the deadline, he places average submissions at 10 claims per week.

(THE NUMBERS IN THIS PARAGRAPH AND OTHER STRIKE-THROUGHS ARE AMENDED AND UPDATED BELOW) This is a staggering statistic. According to the @NFLSettlement Twitter account, for the corresponding timeframe as the BrownGreer report, 8,238 BAP appointments have been attended. Of the more than 8,000 appointments only 88 have resulted in a qualifying diagnosis (which presumably would equate to a monetary award). That means that only about one percent of BAP exams have resulted in a qualifying diagnosis.

I am adjusting the calculations above based on GRG’s BAP Status Report dated February 28, 2019.  The figures release by Co-Lead Counsel and the Claims Administrator seem misleading in view of the Garretson Report.  The 8238 (Seeger-Weiss number) BAP appointments cited do not represent individual players but rather one of two required appointments for players — the neuropsych exam and the neurologist’s exam.  According to Garretson, 3,773 players have completed both BAP appointments which are necessary for a qualifying diagnosis.

While it can be presumed that not everyone who attends a BAP appointment is, in fact, impaired, even if we trim things down and presume only half the players attending BAP appointments are having problems or haven’t yet received results, we only raise the diagnosis quotient to 2%.  Statistical analysis of the prevalence of CTE in the retired NFL population estimates that between 20 and 30 percent of players will develop CTE, indicating neurological impairment. The most conservative margin in that study is 10 percent, leaving between 824 and 2,471 players that should statistically qualify for a settlement award—not 88.

UPDATE: According to Garretson,  off the 3,773 players who have attended both appointments, 3,048 of these have been submitted to GRG, and of these 2,360 have been reviewed by GRG and published to the portal, meaning the results are available to unrepresented players or the attorneys of represented players. 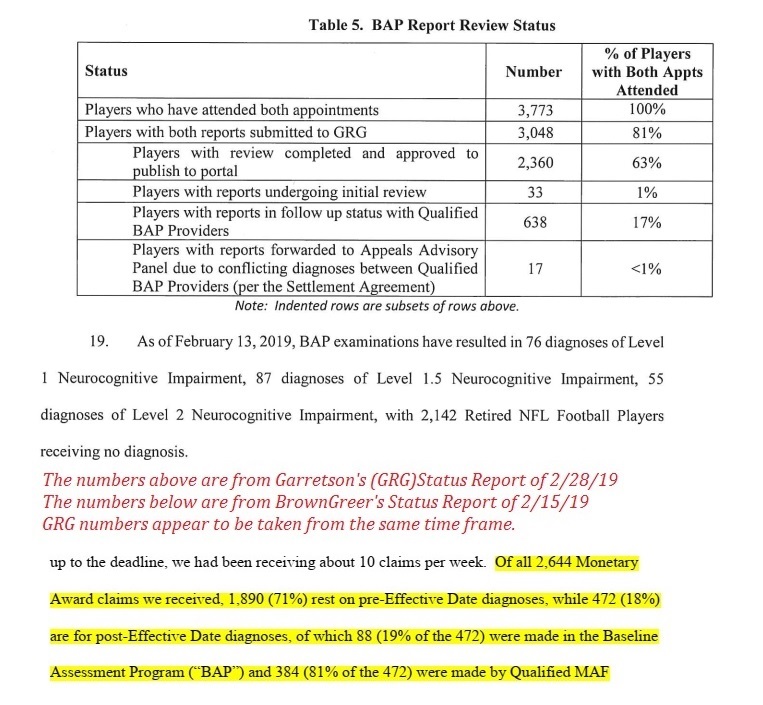 If we are to assume that 142 players received a qualifying diagnosis in the BAP, and the BAP appointments reported were 2 per player (roughly half the number of players as appointments) as indicated by GRG then the percentage of players receiving a qualifying diagnosis should be adjusted to 6% rather than 1% as reported previously, based on 2,360 players whose BAP results have been received and reviewed.

If you can call being diagnosed with Neurological Impairment, or dementia “good news,” then I suppose the good news is that the odds of receiving a diagnosis through the BAP is slightly better than previously reported. BUT why the difference in diagnoses and awards?  Have these claims not been submitted? Has the claims administrator just not processed these claims?  OR are BAP diagnoses being subjected to audits and extensive review as with MAF and pre-effective date claims?  I don’t have an answer because little is being published aside from numbers.

If BAP claims, as rigid as they are are being subjected to the same intense scrutiny, this only underscores the importance of the generally consistent standard of diagnosis and why the NFL has fought fiercely to contain it. This is not what was portrayed to retired players and their families when they were asked to accept the settlement.

The Claims Administrator’s report says that they have issued notices of monetary award for 779 claims totaling $618,768,460. So far 702 of these have been funded by the NFL, which has deposited $499,393,980 into the monetary award fund. BrownGreer has issues payment for 569 claims, totaling $425,221,431. The report states “The remaining 41 funded claims were not yet ready for payment when we submitted the most recent Disbursement Request; some have not been paid because they have been stayed by the Court’s November 16, 2018 (Document 10337) or December 10, 2018 (Document 10356) Order, some have holds preventing payment, some have not submitted a Payment Election Form or SWS-5, and some have holdbacks for potential Liens which, together with the 5% deduction for the Common Benefit Fund, exceeded the gross award amount.”

Table 1 shows the distribution of funds that have already been paid. 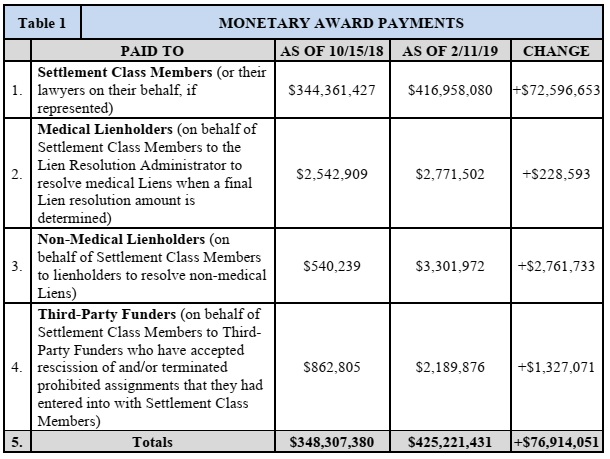 Table 2 shows the difference in monetary award status since the last claims report was issued.

The report states that of the 779 approved claims, 143 (18%) have been appealed (112 by the NFL and 31 by settlement class members who disagreed with the amount of the award.) What the report doesn’t show is the breakdowns by diagnosis, but that info is available on the February 11, 2019 Summary Report. 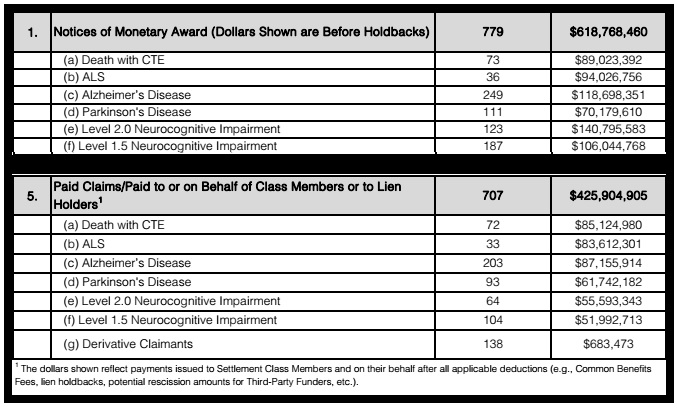 I crunched things down a bit from the February 11, summary report looking at breakdowns by diagnosis.

As you can see, dementia claims, which compose 61% of claims filed by are statistically least likely to be paid. A breakdown of approved pay-outs by diagnosis is shown below, calculated from the same report.

One of the hot-button issues in the settlement at present is the NFL’s appeal on a Special Masters’ opinion regarding discretionary use of the Appeals Advisory Panel (AAP). The settlement agreement stipulates that the AAP must be used to evaluate pre-effective date claims and post-effective date claims where a MAF or BAP neurologist and neuropsychologist disagree on a diagnosis. Aside from these conditions, the claims administrator or the special master may consult the AAP if desired. This statement by the NFL in their appeal shows their intent.

Judge Brody has not yet ruled on the NFL’s appeal. Orran Brown, did, however elaborate on current AAP use in his report. 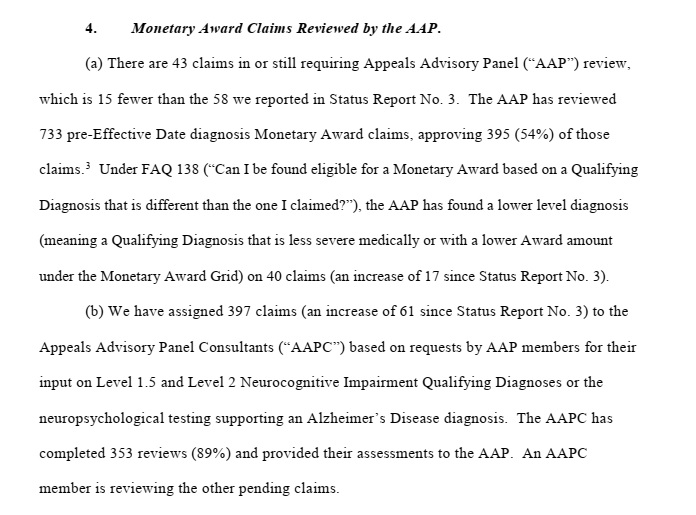 While there are no specific figures regarding diagnosis to work from based on Section 5 of the Summary Report most of these are likely to be pre-effective date claims, although at least some MAF claims have been referred to the AAP or AAPC.

The claims administrator states that 580 claims have been denied, to date. Of these, the AAP found 339 (58%) did not reflect a qualifying diagnosis. Brown says other denials were based on some other area of settlement criteria not being met. Of the denied claims, Brown says 123 have been appealed.

While the Special Masters have not yet issued a ruling regarding statute of limitations for players who died before January 1, 2006, the claims administrator did provide the status of claims received which hinge on the eventual ruling. 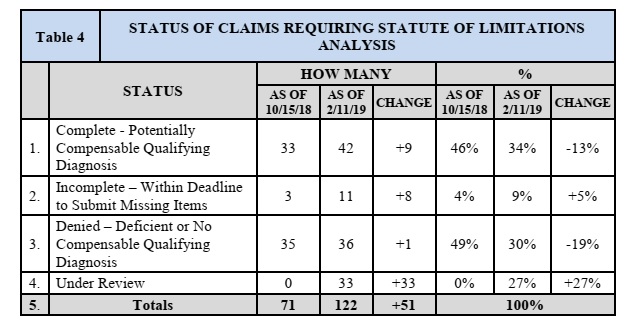 Brown states that the MAF physician list on the website includes 127 of a total of 153 approved MAF physicians; he indicates they are waiting on contracts from the other 26. He also says that they have contracts for MAF doctors in 41 of the 53 target cities.

Unfortunately, Brown indicates that the claims administrator has sought recommendations from the AAP to fill vacancies and add to the approved MAF list. This could mean that obtaining diagnoses through the MAF may become more difficult, based on AAP opinions of dementia qualifying diagnoses.

The 28-page BrownGreer report also details a number of completed audits as well as some that are ongoing. Other topics addressed are derivative claimant awards, various types of liens and lien disputes, procedure changes, changes to the website and more. The status report is embedded in its entirety below.  Added to this in a single document is the Garretson Report on the BAP, which indicates the number of BAP physicians in the program, estimated wait times for appointments, and more.