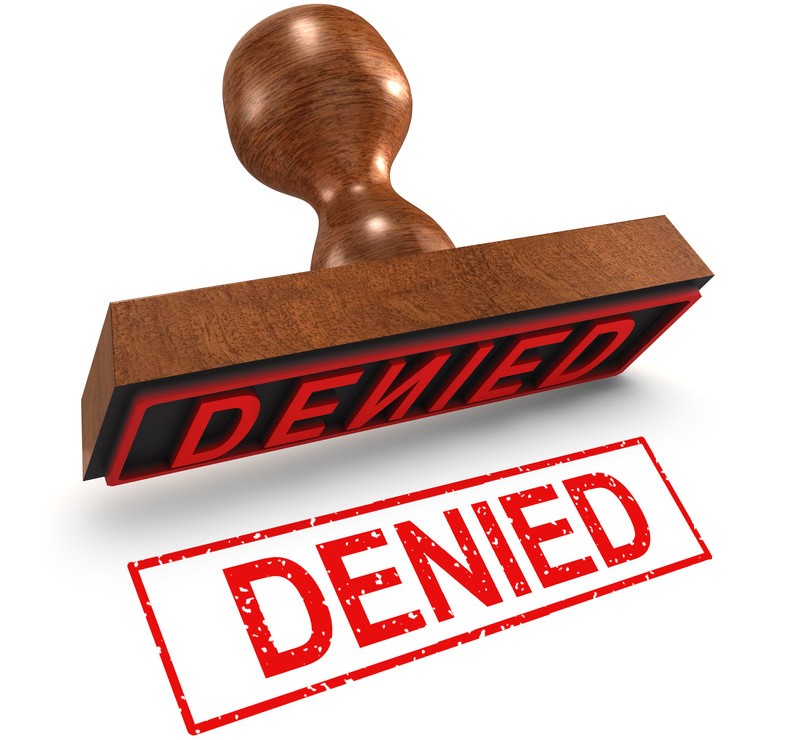 In June 2014, after Judge Brody threw out a $765 million concussion settlement agreement as insufficient the NFL agreed to an uncapped monetary amount which was approved on April 22, 2015 and became final on May 8, 2015.  As noted in an article that I wrote prior to payouts beginning, two highly regarded sports attorneys, Daniel Wallach and Gene Egdorf were of the opinion that the NFL wouldn’t agree to an uncapped settlement unless they had an idea of what they would be paying out or a way to mitigate their losses.  Gene Egdorf stated:

The notion that ‘no cap’ in reality is wishful thinking.  Does anybody really believe the NFL would do this without having a firm knowledge of the eventual payout and/or say and control of payment decisions?”  First, I don’t believe most players understand how they have been excluded from this settlement. The vast majority of players are not only ineligible to receive any funds, any future claim for anything other than Alzheimer’s or ALS is gone. A player that is diagnosed with CTE – the biggest problem impacting the lives of the most players – gets nothing.

A couple of motions filed Tuesday would appear to confirm the validity of these assertions.  In one motion, sixteen retired players asked the court to administer claims as they were stated in the settlement.  The claims within the motion are disturbing.  The players represented had all been diagnosed with dementia after the date of the Preliminary Approval and Class Certification Order but before the Effective Date; as such, the following provision was established to determine these claims:

Additional requirements are as follows: 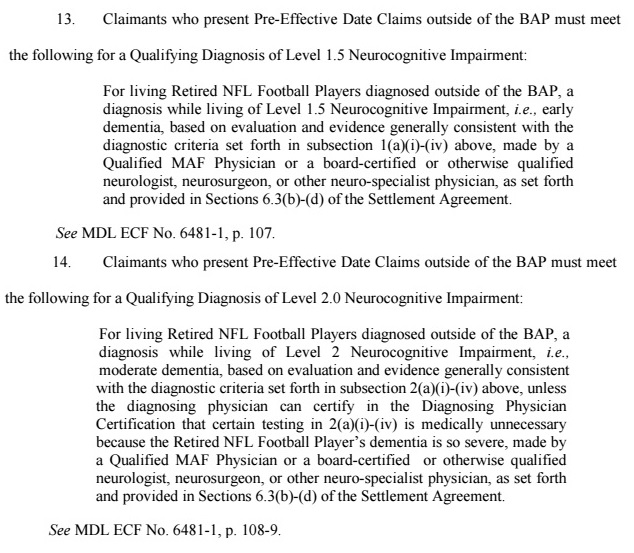 These players obtained what should be qualifying diagnoses in accordance with the settlement’s instruction as referenced above.  Instead, “deficiency notices” were issued from the settlement’s Claims Administrator requiring this class of players to comply with stipulations designed for players diagnosed after the Pre-Effective Date, including this impossible criteria:

[T]hat the diagnosing physician did not consider documentary evidence of functional impairment for a Qualifying Diagnosis of Level 1.5 or 2 Neurocognitive Impairment.

I call attention to the near-impossibility of this because Levels 1.5 and 2.0 Neurocognitive impairment are not recognized medical benchmarks of diagnosis; they were instead established by and through the settlement as a means of claims designation.  As these “standards” were not in existence prior to the settlement, a doctor who performed examinations prior to this time would be unable to apply a non-existent standard.

Another hurdle players must face is that in addition to needing a diagnosis which meets the settlement’s Post-Effective Date requirements, players who file Pre-Effective Date claims must have examining doctors compare cognitive decline with prior medical records. This was not a requirement stated or implied in the plain language of the settlement agreement. For those who had previously obtained dementia diagnoses, many of whom have been already acknowledged and approved by the NFL’s own 88 Plan or other disability determinations, this creates a substantial hurdle.  According to the motion and supporting memorandum of law, at least one of these diagnoses was made by a Johns Hopkins trained board-certified neurologist, who is also a MAF physician approved by NFL Counsel and Class Counsel.  All rejected claims involved diagnosis by a board-certified neurologist in accordance with the Pre-Effective Date terms of the settlement.

Counsel for the players represented by the motion states that the Claims Administrator (whether purposely or inadvertently) has created a de facto amendment to the settlement which could disqualify a number of Class Members. 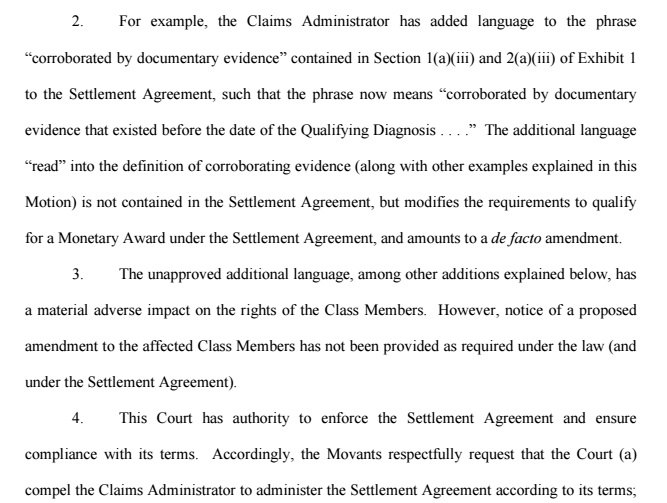 Counsel for the players asserts that the deficiencies for which the Claims Administrator rejected the claims is two-pronged, and the means of satisfying the first prong in the Deficiency Notice would conversely “then result in a cure failure” in regard to another sub-section of settlement stipulations.

This appears to be quite dangerous for players in that the settlement is governed by a “two-strikes and you’re out” clause. 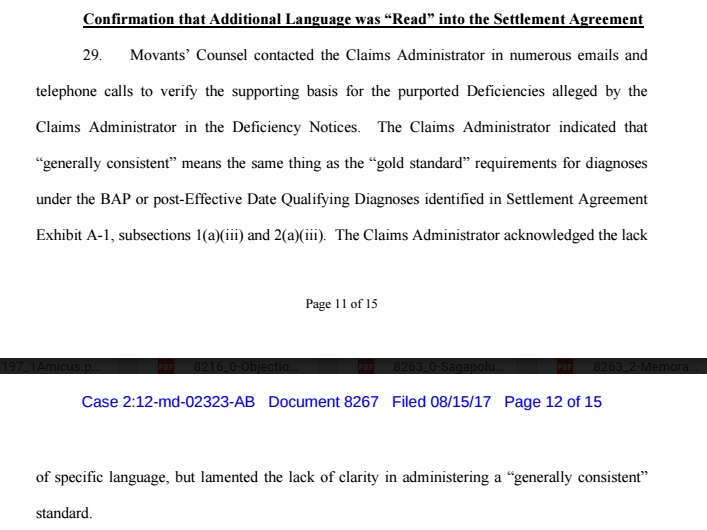 I represent people, they are retired professional football players, with brain injuries. They have been examined and have injuries that warrant a pay out. We have submitted the proof and are being told the proof needed has now changed. My families must get paid according to the agreement not delayed/denied based on interpretations outside of the settlement. These are men who have rapidly deteriorating health and any delay is unjust.”

It seems troublesome that if an attorney is having this much difficulty in procuring a proper settlement for players with a definitive diagnosis, one must be concerned as to what will happen to those families who are trying to self represent or whose counsel may not catch the two-pronged dilemma quickly enough – or if the court refuses to grant the motion leaving possibly hundreds of NFL veterans without recourse.

I decided to contact a few families to see how their claims are proceeding.  The daughter of a former Cowboys’ star says that they haven’t heard anything back on their concussion settlement claim but she’s not holding her breath.  “This is exactly the BS I knew was going to happen,” she said, “THEY get to determine dementia? We have a definitive diagnosis of dementia (level 2) from 2014! Then we have another definitive diagnosis from this year, showing it’s much worse. First of all, EVERY neurologist I have seen or spoken to says there is No [such thing as] 1.5, or 2 in medicine. You have it, or you don’t. Yet the NFL are suddenly neuro experts. We just saw the NFL’s neurologist for an 88 Plan evaluation. No MRI, no neuropsychological testing. Just a doctor talking to my Dad for an hour which I sat in on. They will do ANYTHING to avoid paying these players,” she said.  She also told me that there is a great deal of fear within the retired NFL community.  Players and their families are facing denials or are being put through near impossible paces in order to obtain their benefits or awards.  “Many are afraid to speak out,” she said, “afraid if they do, it will be an automatic denial.”

I also spoke to the wife of a 59-year-old, 8-season NFL veteran who began showing dementia symptoms seven years ago, and she confirmed.  “It’s horrible to feel as if you are being watched. The guys have always said the NFL has eyes and ears everywhere. I learned to believe them.”  She agreed to speak with me only on the condition of anonymity.  Like the players who filed the motion with the court, her husband’s case is hitting its share of roadblocks.  “My husband was diagnosed two years ago with Alzheimer’s. Board Certified Neurologist. MRI, Neuro-psych test, PET scan. He qualified first time around for the 88 Plan and his claim went to review 3 weeks ago because the doctor’s notes stated ‘three-month follow-up’ and didn’t include the word Alzheimer’s! So, I submitted his medication list, printed from the Dr.’s office stating each medication prescribed for Alzheimer’s. They required further documentation. Apparently, a definitive diagnosis and positive PET Scan wasn’t sufficient,” she said, adding, “Either the Claims Administrators are grossly incompetent or they are intentionally delaying legitimate claims.”

I spoke to others who confirmed they are in similar situations but did not give me permission to publish their personal experiences.

As noted previously, this is exactly the situation a number of law experts and disability attorneys anticipated in respect to dementia claimants.  Last week I reported how ALS claimants, who are beginning to receive awards, are dealing with huge unexpected medical deductions, that are being withheld from award sums whether or not Medicare or Medicaid was involved, seemingly to allow private insurers plenty of time to claim a piece of the pie if they haven’t already filed a lien.

In another Tuesday court filing, claims were made that an entire sub-class of “death with CTE” plaintiffs has been eliminated through lack of notice by the Court.

This is a situation Judge Brody needs to address and remedy quickly.  The “quick and easy” claims filing process touted by Class Counsel and their appointed Claims Administrator is becoming a living nightmare for far too many NFL families who are already dealing with severe hardship.

The 8-year veteran’s wife that I spoke with stated, “It appears ours is close to being final, but it is hard to know at this point. I feel blessed that we aren’t needing that money to survive.”  Both the daughter and the wife I spoke with expressed grave concern for those players without families to help them through the process or those who are in desperate financial need.  “It is a difficult journey and for the NFL to make it more difficult is beyond cruel.”