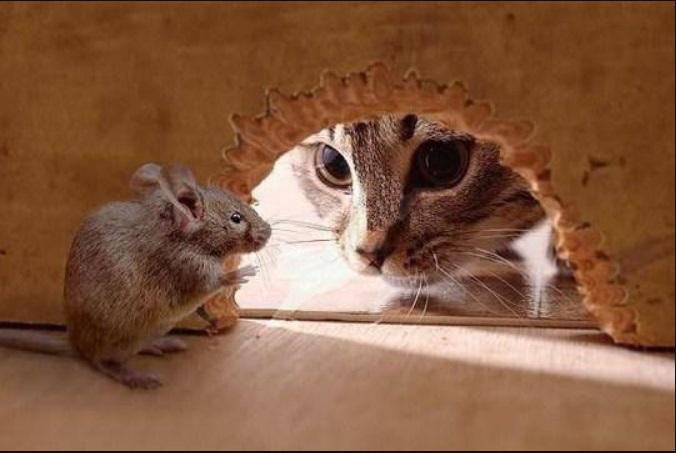 On August 31, I reported on a ploy by the NFL to kill a number of dementia claims dead in their tracks, as revealed in non-public documents obtained by Advocacy for Fairness in Sports.  The documents consisted of three letters to Special Masters in which the NFL sought compulsory review of approved claims by  Appeals Advisory Panel members and Appeals Advisory Panel Consultants.  At the center of the dispute were twenty-three approved dementia claims but the collateral damage the NFL sought to inflict was far-reaching.

Because the documents were not filed on the public docket, neither the public, the class members, and in all probability even their attorneys were aware of a potentially deadly storm brewing behind the scenes.  On October 9, the attorneys representing the players received an email from the claims administrator with a decision from the Special Masters denying the NFL’s request for a stay of payment on the twenty-three affected claims.  Oddly, the decision by Special Masters was dated September 28.  It’s unclear as to why the attorneys weren’t notified of the decision until 10 days had passed and why it wasn’t posted to the public docket as the Claims Administrator had indicated in his initial email to the attorneys.

To better comprehend the stakes for retired players and possible future implications, it’s essential to start with a review of the events leading to the decision.

In the first letter, dated June 28 from NFL counsel to Special Masters the NFL debated the legitimacy of several approved claims and demanded that Special Masters utilize the AAP for further review.  The claims in question had been approved by the Claims Administrator, some after a lengthy audit process.  The NFL appealed the claims and they were again subjected to scrutiny by Special Masters during the appeal, survived that process and were finally ready for payment.  Unlike claims the NFL tried to bulldoze early in the settlement, most of these claims were based on diagnoses rendered by settlement approved MAF and BAP physicians.

While the NFL stated that it wasn’t trying to “second-guess” the doctors that was exactly what the NFL sought to do, or perhaps more correctly cause the Special Masters to doubt their own ability to review claims and cede their court-appointed authority to a panel of doctors who appear to lean favorably toward the NFL.

Evidence points to an NFL scheme to deny claims to players suffering from all, but the most severe forms of dementia and the AAP appears to be central to their plan.  Consider, as the NFL writes:

Translation: “We’ve reviewed approved and denied claims and have noted utilization of the AAP has resulted in most of the denials; therefore, most of the approvals were most likely erroneous.  At least that’s going to be our position as long as claims are being approved.”

The NFL also stated, “Despite the fact that Qualified MAF Physicians are approved by the Parties…[t]he Parties did not personally interview these physicians or train them on all aspects of the Settlement program; instead, the Claims Administrator has provided them a manual and periodic alerts on various topics.”  This would seem to indicate the inverse of their statement may be true: “The NFL Parties personally interviewed the AAP doctors, and trained them on all aspects of the Settlement Program” as well as their interpretations of the same.

If this assumption is correct, it could easily be inferred that the NFL has instructed or at minimum strongly suggested the AAP review claims as critically as possible and use any circumstantial evidence the NFL may be able to dig up to discredit the diagnosis of the doctors who examined the players.

In a motion filed by Locks Law in March, Mr. Locks implied the NFL has failed to allow doctors who believe in CTE to the appeals panel.  If this is true, it could be problematic for players who’ve been examined by doctors who’ve evaluated the whole of their symptoms and the context, as opposed to doctors who tend to dismiss the link between brain trauma and latent functional impairment.  In the diagnosis of dementia there are 6 domains in the CDR evaluation, however the NFL and apparently AAP have focused on only three, discounting other levels of impairment, regardless of how severe.

For instance, the NFL excerpt mentions the ability to drive independently.  It doesn’t apparently matter to them if the player gets lost when he does drive, or if he’s able to remember where he was headed and what he was supposed to when he arrived, or if he remembers how to get home afterward, which is frequently the case of player who have continued to drive.  Apparently in the eyes of the NFL, if a man can find his way to the car, start the ignition and operate and alternate between the accelerator and brake, he is too functional to be considered for compensation, despite the fact this is largely reflex and muscle memory for someone who has been driving for any length of time.

Volunteer duties for church is another area mentioned by the NFL.  A preschooler is capable of passing out church bulletins, shaking hands with visitors or passing a collection plate.  Perhaps he sang in the choir? Glen Campbell performed over 100 concerts after being diagnosed with Alzheimer’s disease.  Why should a player be disqualified from the settlement from doing something similar, especially if there’s no evidence he remembered all the words or managed to stay on key?

The NFL position seems clear from this statement.

“Not every retired player with cognitive or neurological issues is entitled to a Monetary Award.” The NFL seems to desire to manipulate the system and eliminate any player who has a moment of clarity or is capable of dressing himself or doesn’t require Depends for Men as of yet.  This of course, as they state, is “to ensure this carefully calibrated and negotiated result,” the result apparently being the original $675 million payout instead of the blank check they agreed to because they thought they’d found sufficient barriers for players as to keep the settlement invisibly capped.

Seeger argues that what the NFL is asking for is a rewrite of the settlement, and he is correct.  After the attorneys representing the twenty-three affected players were notified of the NFL’s objection they were permitted to respond, and elaborated on the same argument that Seeger put forth previously. 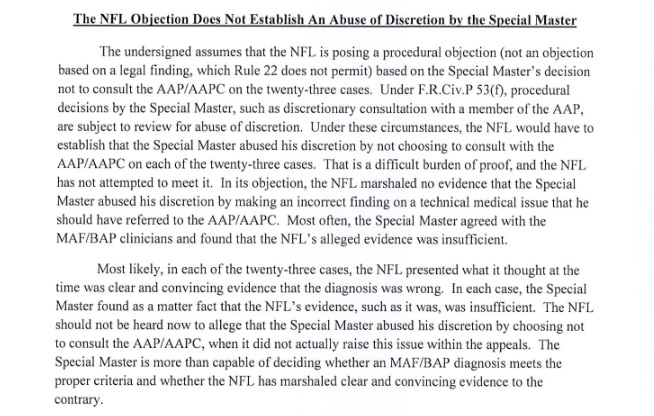 Writing on behalf of the players, David Langfitt of Locks Law also pointed out that as a legal expert, the Special Master is ultimately more qualified to evaluate evidence and balance it with legal arguments and posturing of counsel than the AAP who have no experience dealing in that area.  The Special Masters are free to use the AAP should they have medical questions, but in most instances, the claims the NFL said required evaluation of a technical medical issue, involved no technical questions.  Several examples were included in Langfitt’s brief, similar to and including these:

The status of a girlfriend later becoming a wife has no resemblance to a medical question.

Here a qualifying diagnosis was made by a MAF provider and retroactively dated to his social security disability date in accordance with published MAF rules and Special Masters FAQ 93.

Most examples were along the line of this one, however:

In almost every example, the NFL just didn’t like the conclusion of the player’s examination because it resulted in a diagnosis they were obligated to compensate, while providing no convincing evidence to support their position.

Seeger further explained, in his second response the limited role of the AAP as negotiated and agreed to by the Parties: 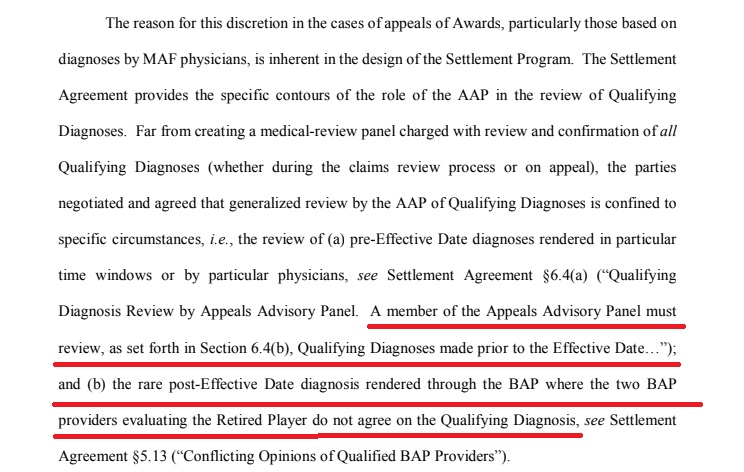 While both Langfitt and Seeger presented excellent arguments, I was somewhat surprised they didn’t cite the NFL’s own argument in their brief opposing the Locks Motion which supports the AAP’s primary purpose in confirming that a pre-effective date diagnosis “was made by an appropriately credentialed physician under the terms of the Settlement Agreement and to review the Qualifying Diagnosis based on principles generally consistent with the diagnostic criteria set forth in the Injury Definitions of the Settlement Agreement to ensure the validity and appropriateness of the diagnosis. (See, e.g., Settlement Agreement § 6.4(b).)” 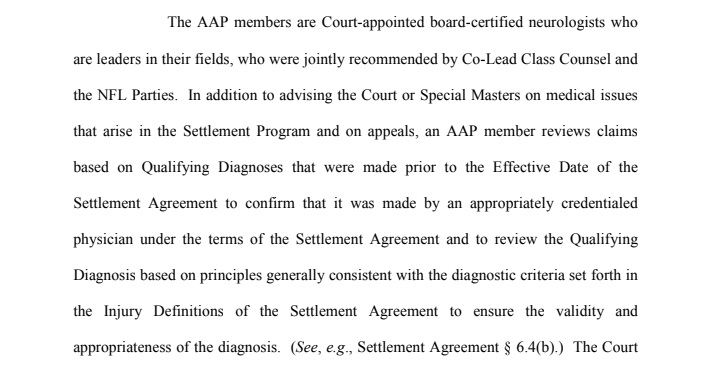 The NFL speaks with forked tongue.

Fortunately for the players, the Special Master seemed to see the ruse at face value and agreed with the plaintiffs in the opinion embedded below.

Since the decision was issued on September 28 and still has not been posted to the docket, one is left to wonder why, since the initial email to the attorneys noted that the final decision would be placed on the ECF system. Perhaps, they are waiting to see if the decision is, indeed final, or if the NFL will appeal to Judge Brody.

Past decisions by Judge Brody would indicate that should the decision be appealed, she would probably go with the recommendation of the Special Masters, which is also in line with Seeger’s position, which she has rarely opposed.  While nothing can be assumed until a decision reaches the end of the line, indications are good for players, assuming there is no reversal of opinion by Special Masters, as seemed to occur in the NFL’s request for a special fraud investigator.

Hopefully the twenty-three players who’ve had their approved claims held up for months will now at long-last be paid, and perhaps claims processing will proceed smoothly for a while until the NFL devises another tactic to mitigate its losses to the detriment of injured and deserving players.  At least for now, the player’s have finally scored a much-needed win

Update October 15, 2018: Advocacy for Fairness in Sports has learned that the Special Masters decision detailed above is subject to NFL appeal until October 29 (twenty days from the date the parties were notified via email.) Delivery of the September 28 decision was delayed because the Special Masters are also considering an NFL objection regarding proper interpretation of the generally consistent (with BAP) standard, so that if appealed, both matters could be presented to the Court at the same time.  According to information provided to Advocacy for Fairness in Sports,  “The Special Masters have not ruled on the generally consistent objections and directed [the Claims Administrator] to proceed with this ruling on its own schedule.”  Concern has been expressed that if the NFL prevails on that issue most remaining pre-effective date and some post-effective date MAF diagnoses could be in jeopardy.