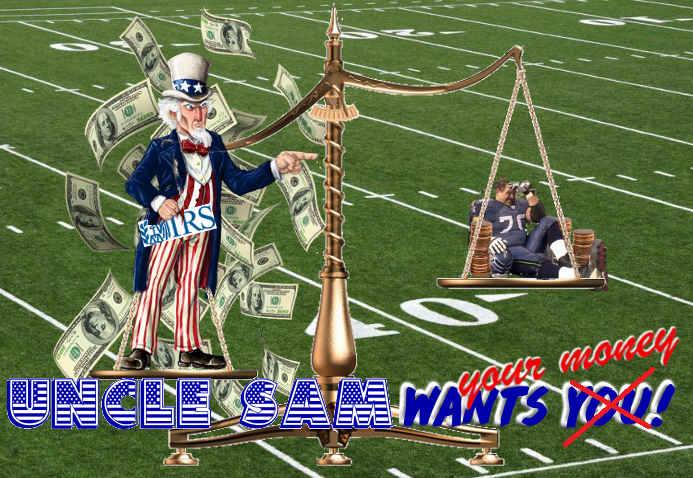 Benjamin Franklin famously said, “In this world, nothing is certain but death and taxes.”  In my “settlement buster series,” I’ll be taking a closer look at a few things that can derail what appears to be a lucrative settlement, liens, settlement advances, bankruptcy, and taxes.  Part 1 focuses on taxes.

As a general rule, personal injury compensation isn’t taxed but most other forms of compensation awarded through a lawsuit are considered taxable income.

For those in the NFL Concussion Settlement, since awards are based on a qualifying diagnosis of a medical condition, there typically isn’t any tax liability on these awards, however they are subject to liens of several types and bankruptcy garnishments that have left some class members wondering what happened to the settlement they thought they were supposed to receive.

Colin Kaepernick’s settlement, estimated at between $60 million and $80 million, with the NFL in his collusion case has recently been in the news and because his settlement isn’t related to physical injuries, it is most likely  subject to taxes according to tax attorney Robert W. Wood.  Also, according to Wood, a new law also leaves attorney fees taxable in most instances.  The IRS states, “If you receive a settlement in an employment-related lawsuit; for example, for unlawful discrimination or involuntary termination, the portion of the proceeds that is for lost wages (i.e., severance pay, back pay, front pay) is taxable wages and subject to the social security wage base and social security and Medicare tax rates in effect in the year paid. These proceeds are subject to employment tax withholding by the payor and should be reported by you as ‘Wages, salaries, tips, etc.”

I tried crunching some numbers based on a $60 million award less state and federal taxes, FICA, plus a 33% attorney fee to see what this might look like, and came up with about $9.5 million after deductions.  I contacted  @SportsTaxMan, Robert Raiola, to try to make better sense of this.  He cautioned against trying to get specific on the numbers because there are a myriad of elements in play, and that the figures I’d calculated amounted to a worse case scenario.  He said that depending on the structure of his settlement, Kaepernick may not be liable for FICA, Medicare, and state taxes.  According Raiola, he most likely would be accountable for the attorney fee unless his filings were set up in a way to claim it as a business expense, and in any instance, his award is definitely subject to federal income tax.

A coach who is fired “without cause” and sues his former employer for lost wages would seem to be in a similar position as Kaepernick.

Worker’s compensation is one type of settlement that isn’t taxed, since it is based on an employee’s physical injury, however certain disability incomes may be taxed.

If a player qualified only for Social Security Disability he generally would not be taxed since FICA was deducted from his income when he was employed and a person typically isn’t taxed twice on the same income.  Typically, may be the operative word, however.

Sometimes settlements include more than one type of compensation.  For instance, if a player suffers an injury through negligence on the part of another party, he may be eligible for several different kinds of compensation.

For example, let consider a player that suffers a career-ending injury from improperly installed or maintained turf at an away game.  His settlement might include medical, or personal injury compensation that isn’t taxed.  He might also receive compensation for pain and suffering.  If the pain and suffering is attributed to the physical injury, it probably won’t incur tax liability, however, if the pain and suffering is mental anguish such as depression or anxiety rather than the physical pain of the bodily injury, that portion of the award probably would be taxed.  If he paid for counseling, or needed antidepressants or similar medication, then what he spent on treatment would probably be tax deductible, but no amounts over actual expenses.  If he also receives compensation for lost income, that portion of his settlement would be taxable, as demonstrated in Kaepernick’s situation, although some variances might come into play to limit at least some of the liability.  Finally, punitive damages that are intended as punishment for a defendant’s wrongful behavior are fully subject to taxes.  As with most instances, the player would also be liable for taxes on the fee paid to his attorney.

Robert Raiola compared non-personal injury lawsuit awards to lottery winnings in the manner in which they’re taxed, however he noted that California, being the state with the highest tax rates doesn’t tax lottery winnings but does tax non-injury settlement proceeds, showing the variance as to how tax matters are handled.  I think my biggest takeaway from looking at settlement tax liability is this: “I’m glad I’m not an accountant.”  My other big takeaway is, that anyone who does receive a settlement would be wise to consult a CPA or tax attorney prior to spending any of the proceeds.

One thing seems certain; Uncle Sam will have his share most of the time.

Permanent link to this article: https://advocacyforfairnessinsports.org/nfl-concussion-settlement/death-taxes-and-lawsuit-settlements/