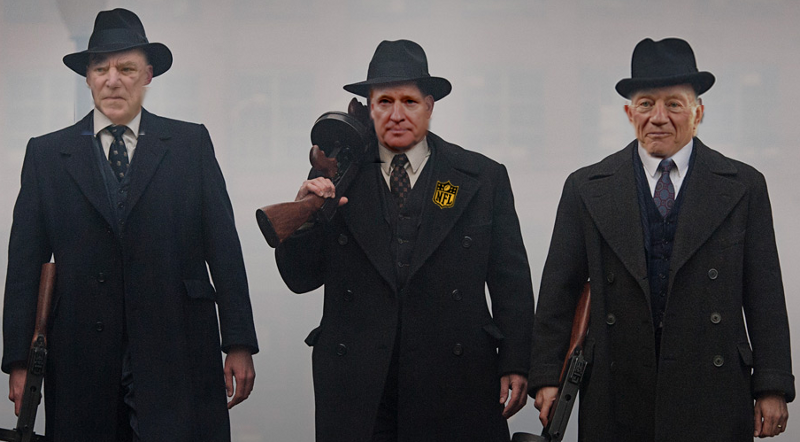 On October 29, in a letter with exhibits to Judge Brody, the NFL launched its most vicious attack yet on settlement claims.  The off the docket filings obtained by Advocacy for Fairness in Sports confirm the strategy of “if at first you don’t succeed, try, try again until someone believes you,” as I alluded to in a previous article detailing the NFL’s efforts to crack down on dementia and Alzheimer’ claims.

Their current anti-claim crusade began on June 28 with an objection submitted to Special Masters regarding their discretionary use of the AAP and AAPC (Appeals Advisory Panel and Appeals Advisory Panel Consultants).  As I wrote on August 31, the day after the secret battle was revealed by the claims administrator to the attorneys representing affected players the NFL apparently had observed that appeals in which Special Masters did not consult the AAP were more readily approved than claims in which the AAP was consulted.  As such the NFL seeks to have AAP review of claims become mandatory and no longer, optional, effectively replacing the decision of Special Masters with the NFL’s hand-picked doctors who have never physically examined the player.

In response, both Co-Lead Class Counsel Christopher Seeger, and David Langfitt on behalf of 23 players whose claims have been held up as a result of the NFL’s objections pointed out this is in direct conflict with the negotiated terms of the settlement. 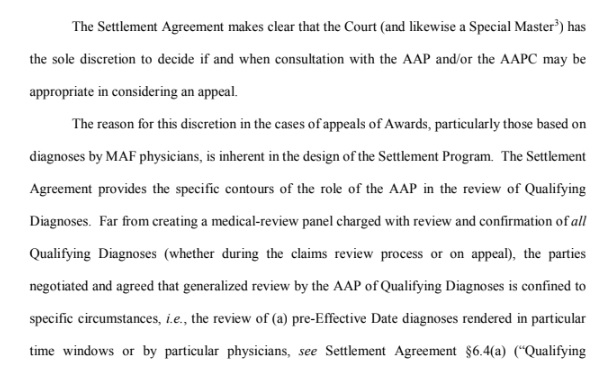 The Special Masters ruled in favor of the players on September 28, however, no parties were notified by the claims administrator until October 9 because the claims administrator was waiting for another decision by Special Masters which he’d hoped to release simultaneously with this one.  I detailed the decision and the high stakes for the players in an article entitled, “Concussion Settlement Retirees Escape the NFL’s Latest Ambush…For Now.”  “For now,” turned out to be the operative phrase, since the NFL has requested a stay with intent to appeal to Judge Brody. 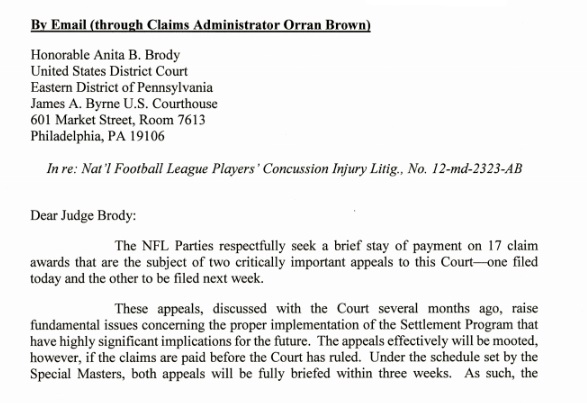 The first appeal mentioned in the NFL’s letter to Judge Brody is the Special Masters’ ruling on AAP review, the second refers to a ruling on the meaning of “generally consistent” as it applies to diagnoses made outside the BAP, to which Special Masters also ruled in favor of the players on October 17.  The 17 claim awards referenced are part of the 23 approved awards held back awaiting an opinion from Special Masters.  While apparently six have not been re-targeted by the NFL, 17 have, along with future settlement awards.  The NFL claims that if payment of these awards is not stayed, then their objections will be effectively mooted after compensation is issued.

The NFL’s arguments are encapsulated in this paragraph:

According to the settlement agreement, the Special Masters, acting as agents of the court have the option to use the AAP on post-effective date claims but they are not compelled to do so.  The NFL insists that failure to consult the AAP is an abuse of discretion.

They also point out that qualifying diagnoses in the 17 awards they’ve targeted from the initial 23 were given by physicians who were either dismissed from their roles as MAF doctors or were “severely criticized” by the AAP.  The NFL, which has spent considerable time interviewing and training AAP doctors state that the AAP has criticized the MAF doctors for “employing suspect methodologies and reaching flawed diagnoses with respect to the very same diagnostic issues raised by the NFL Parties.”  It appears they are weeding out doctors who are experienced in diagnosing NFL players and evaluating them according to their own best judgment rather than strict settlement protocols, at least in some instances.

What does this mean?

“To diagnose level 1.5 or 2, the examining neurologist must take the player’s medical history and then administer either the Mini-Mental State Examination or Montreal Cognitive Assessment. In addition, the neurologist reviews cognitive test results conducted by a board-certified neuropsychologist and a sworn affidavit from someone familiar with the player’s condition but not a family member attesting to functional impairment from cognitive loss. Finally, the neurologist is asked to administer three of the six parts of the Clinical Dementia Rating (CDR) scale: Community Affairs; Home & Hobbies; and Personal Care.”

One of the doctors released, Dr. Randolph Evans, a headache specialist and clinical professor of neurology at Baylor College of Medicine in Houston elaborates:

“They are taking three of the six areas, not the whole CDR instrument. Using just the last three questions on the CDR has not been validated in people with Alzheimer’s and certainly not in retired NFL players to evaluate functional impairment.”

The CDR scale Dr. Evans refers to is shown below. 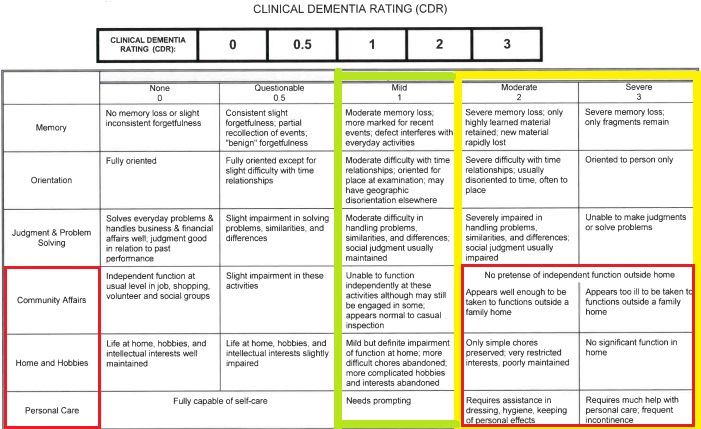 While the settlement would imply that players suffering from Level 1.5 Neurocognitive impairment would fall into the “Mild/1,” column and 2.0 would fall under the “Moderate/2” column, the NFL insists that Level 1.5 should meet the criteria for “Moderate/2” and 2.0 should meet the criteria for “Severe/3.”  Further complicating the issue is the fact that NFL is focused on only three domains.

Dr. Frank Conidi, director of the Florida Center for Headache and Sports Neurology, who has examined more than 500 players says:

“It has nothing to do with real medicine.”

“The affidavit involves asking people other than a family member such as a friend or current employer to give information about functional impairment such as has a declining interest in home and hobbies, or do they have enuresis. I do not find that reasonable. We have no way of independently verifying whether the information they give is accurate,” said Dr. Evans.

He pointed out that about one-third of people with Alzheimer’s drive, yet being able to drive is one of many things the NFL claims should disqualify a player from a settlement award.  The NFL tends to focus primarily on only three of the six domains, and curiously, those domains tend to be the ones that ex-NFLers tend to have the fewest problems in—at least until the latter stages of disease progression near the end of life.  In short, any semblance of independent function should disqualify a player according to the NFL’s interpretation of the settlement.  I’ve explained this in greater detail in articles linked here, here and here.

This argument is the most problematic and likeliest to carry the most weight with Judge Brody:

The NFL argues that if a more relaxed standard is applied to MAF diagnoses than the free BAP exams, then players who participated in the BAP will be prejudiced.  To a degree, this may be true, however, some MAF doctors are also BAP participants, and one must keep in mind that the NFL’s objective is to see as few claims approved as possible.

Prior to the fairness hearing and final settlement approval, objectors and some in the media questioned whether players who’d been affected by brain injury, outside of possibly ALS, Parkinson’s disease and those otherwise completely incapacitated would see any compensation.  During the fairness hearing, Judge Brody heard Chris Seeger refer to Level 1.5 Neurocognitive impairment as “early or mild dementia.” She interrupted him to ask for clarification as to which condition it was and he responded that it’s referred to as both. The Judge then turned to NFL counsel to see if they agreed, to which Brad Karp replied, “We do, Your Honor.”  This was the understanding and explanation players were given when presented with the settlement and an option to opt-out of it.  Now the NFL seeks a by the letter interpretation of complex medical and legalistic lingo rather than the manner in which the settlement was presented to players.

“Craig Mitnick, a lawyer whose firm co-represents more than 1,000 players in the class-action, said he now regrets publicly championing the agreement when it was first announced. Clients who fought for years to get a piece of the settlement have seen their potential payouts reduced to the low thousands, or even to nothing.”

“These players didn’t know what they were getting into,” Mitnick said. “The settlement is not what we thought it was.”

In addition to the Special Masters decision as to the AAP, the NFL announced intent to appeal their decision on “generally consistent” as well. 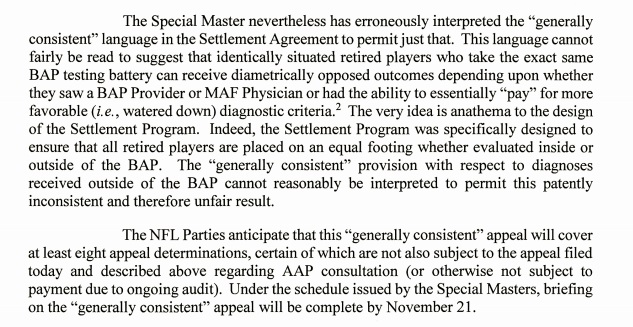 The interpretation of “generally consistent” has been a major source of contention since settlement implementation began.  If Judge Brody should rule in favor of the NFL, this opens an entirely new problem.  Will the NFL seek to recover settlement awards that were issued as “generally consistent”?  While I have no confirming documentation, I’ve been told by one player who received one of the early awards for Level 2.0 that the NFL is now trying to force him to return the money he was awarded.  Needless to say, this is an impossibility for him.  When I last spoke with him, about three weeks ago, he said that he hoped his attorney would be able to handle it.  If Judge Brody rules against the Special Masters, however, it would seem to add more fuel to the NFL’s arguments and the possibility of attempts to recover previously paid claims.  How hard they would attempt to litigate this in view of the fact many players are barely hanging by a thread with little left for them to recover?  Would they also attempt to recover from their attorneys?  I hope these thoughts are premature and put to rest by a favorable decision from Judge Brody.

Past actions would tend to indicate that she generally rules favorably to the arguments Chris Seeger puts forth.  While there’s no public indication that Seeger has supported the generally consistent diagnosis, opposing several motions (alongside the NFL) which sought to clarify the term favorably to players with pre-effective to final settlement approval diagnoses, he has strongly opposed mandatory use of the AAP for MAF and BAP diagnoses.

It’s also noteworthy that she appointed Wendell Pritchett and JoAnne Verrier, two highly esteemed law professors to serve as Special Masters to administrate the settlement and would by implication tend to trust their judgement. Regarding mandatory use of AAP, the NFL appears to stand alone. When attorneys respond to the appeal of “generally consistent,” its less clear who will align.  Appeals to the court are de novo, or from the beginning, so it’s extremely difficult to predict how Judge Brody will view the arguments or if she will even consider the Special Masters’ prior rulings in her evaluations as the de novo process allows an appeals court to substitute its own judgment about whether the lower court correctly applied the law.

One thing is certain. Judge Brody’s rulings will mark a very critical point in the settlement.  A ruling for the players will hopefully ensure that many injured and suffering men and their families will be compensated.  A ruling for the NFL will signify that only the most severely damaged players will see compensation, defeating for all practical purposes, the reason most players agreed to settle.  Unlike in motion practice where attorneys are required to file documents on a certain timeline, the Court has no timetable in which it must rule.  Since the arguments before Special Masters and their subsequent rulings have taken place off the public docket and as of yet have not been reported elsewhere, it seems likely that most players have no idea that a proverbial timebomb has been planted. It remains to be seen as to whether Judge Brody will choose to diffuse it or allow it to explode and destroy the hopes of countless suffering retirees, who wait unaware of the danger.

Link:  NFL’s Letter to Judge Brody requesting a stay and informing of intent to appeal.

Permanent link to this article: https://advocacyforfairnessinsports.org/nfl-concussion-settlement/exclusive-nfl-mounts-its-strongest-attack-yet-on-dementia-alzheimers-settlement-claims/