The NFL Wants to Send Former Players to Prison 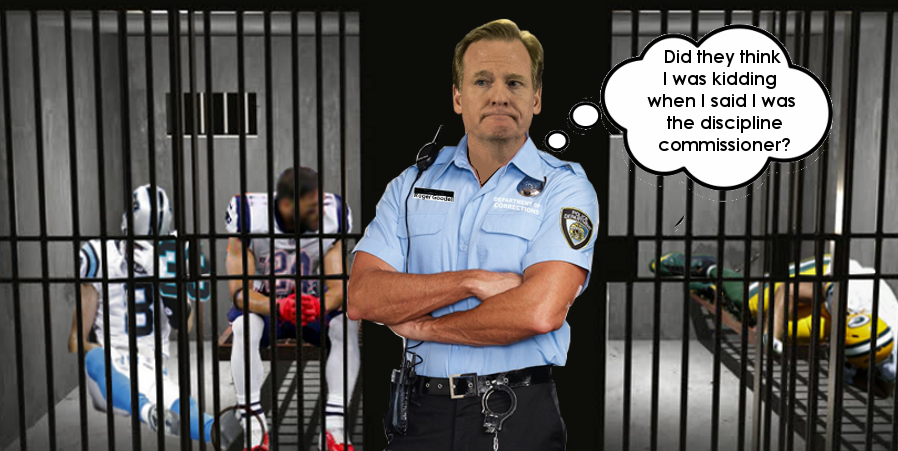 EXCLUSIVE: This is not a drill or exaggeration. In an investigation that Advocacy for Fairness in Sports has been pursuing for the past two months, we’ve finally obtained evidence of the NFL’s latest bid to stop dementia claims in their tracks and to once and for all, put a lid on the uncapped settlement purposed to compensate players suffering from latent brain injury.

The investigation began when I started hearing murmurs about the NFL seeking to permanently disqualify retired players from the settlement if an aspect of their condition had been “misrepresented.”  Early efforts to obtain additional information and supporting documents met with roadblocks at every turn, but Advocacy for Fairness in Sports has now obtained documents confirming the NFL’s devious plan.  These documents were purposely made available only to a very few select people  – Lead Counsel Chris Seeger, NFL Counsel, the Claims Administrator, the Court,  four firms whose clients are directly impacted and a vulnerable pro se class member who has also been targeted in the NFL’s latest and most and most chilling and deplorable tactic to date.  It appears that few others have had access.  Not only does the NFL seek to disqualify players but the league also wishes to pursue criminal fraud charges against them which, if allowed could result in prison terms of up to 20 years.

It’s evident that the NFL’s strategy has been in play for more than a year.  Last March the NFL asked the Court to appoint a special fraud investigator with the authority to subpoena and pursue criminal indictments.  After initially deferring on their motion, Senior Judge Anita B. Brody granted the request and appointed Lawrence Stengel to the position.  Most recently, in a rather cryptic order, Judge Brody appointed rising star defense attorney Susan Lin as a special master to advise the Court regarding the protection of participants’ rights in the investigative process, although which participants she seeks to protect is vague.

Brody stated that the qualifications for this individual would include knowledge and experience in the areas of constitutional law, criminal law, and criminal procedure.

After at least two years of waging a relentless war against dementia claims, seeking to weaken the generally consistent standard, consolidate more power to their hand-picked appeals panel doctors, and eliminate what’s left of the bargained-for standards for pre-effective date claims, the NFL is now seeking to use its version of a nuclear option to silence those pesky former players once and for all.

In what on information and belief is Seeger’s first direct correspondence with the Class of Retired Players in over two years, on July 2, he sent a letter that included an “alert,” that I would interpret as a warning.

Several months ago, the NFL decided to target claims of five players who had received a Level 2.0 Neurocognitive Impairment diagnosis from Qualified MAF and BAP providers mutually agreed upon by the NFL and Class Counsel.  When the claims were submitted and approved the NFL used their own investigators to keep the players under surveillance to record any activity that might cast doubt on their claims.

Advocacy for Fairness in Sports has finally obtained and reviewed some of the documents relating to the NFL’s devious scheme to once again manipulate facts and evade accountability to the players harmed by their initial concealment and deception regarding brain injury. As part of the stipulation for obtaining the documents, I had to agree to strong measures to ensure my source is not identified, therefore I cannot publish the actual briefs acquired nor can I use snips or direct quotes as I normally do, since each recipient received a slightly modified version of the documents, presumably as an attempt to prevent leaks or alternately identify the source should a leak occur.

The following is a summary of the events based on the documents I’ve obtained.  The arguments await a ruling from Judge Brody.

The opposition brief filed by Lead Counsel Chris Seeger states that instead of appealing these approved claims as per settlement protocol, the NFL instead insisted on audits of the claims despite, in four of five cases, having completed their surveillance of the players prior to the deadline for filing an appeal, thus substituting audits for the appeals process.

The Claims Administrator accepted the NFL’s audit request and reviewed the surveillance materials, questioned the diagnosing physicians, the lawyers and the players.  In each instance the players and other involved parties were fully cooperative with the audit procedure, providing any information or clarification asked for.

The NFL’s investigators caught the players driving short distances, and in their view, completely divorced from mainstream medicine, this means the players are not sufficiently functionally impaired and their representation of their diagnosis constitutes criminal fraud with penalties of up to 20-years imprisonment.

As explained in both Seeger’s brief as well as briefs from individual counsel, in most instances, the doctors were already aware that the players drove a very limited amount, and in their view, this did not impact the diagnosis they rendered. The doctor who was not aware that his patient drove infrequently also stated that it doesn’t change his evaluation or diagnosis.  All five of the players underwent neurological examinations as well as extensive neuropsychological testing that indicated severe cognitive deficits in the Language and Memory domains, which according to Settlement Agreement Exhibit 1, Section 2(a)(ii) qualifies them for a Level 2.0 award.

Significantly, the NFL doesn’t dispute the fact that the players suffer from severe cognitive defects as defined in the Settlement Agreement.  The NFL doesn’t even claim the decline was caused by substance abuse, medications, sleep disorders or other potential factors they’ve questioned to discredit other claims.

Astoundingly the solitary focus of the audits is isolated surveillance gathered by NFL investigators that purports that the players have some limited functionality in daily life.

The Special Master reviewed the surveillance materials along with the responses to BrownGreer’s audits and declined further action.  The NFL claims the Special Master exceeded his authority in doing so, but as Seeger pointed out in his brief, the Special Master followed the Settlement Agreement to the letter and the factual finding was completely within his discretion.

The Settlement and governing rules provide an opportunity for the NFL to submit evidence and have it weighed by the Special Master.  In this instance, the Special Master did not find it compelling and certainly not reaching the bar of “clear and convincing.”

The Special Master, instead of blindly issuing a decision from a vacuum of an incomplete picture presented by the NFL, evaluated each claim and the evidence presented for and against.  I wish I had a dollar for every time I’ve seen the NFL argue in a labor context that an appellant from Goodell’s judge, jury, and executioner power granted by Article 46 of the Collective Bargaining Agreement can’t be overturned because the appellant disagreed with the outcome, yet this is exactly what the NFL seeks to do here.

The NFL argues that had the Special Master accepted the audit referrals punitive remedies would have been imposed on the players, but in his rebuttal, Seeger counters that acceptance of an audit by the Special Master is the beginning and not the end of the process, leaving no credible indication that the Master would have imposed the penalties of disqualification and criminal prosecution sought by the NFL.

Seeger pointed out that the NFL’s objection and request for disqualification and prosecution because the players allegedly failed to provide accurate information to their medical providers reveals a fundamental misunderstanding of the nature of dementia.  I guess that’s a polite way of putting it.  I’d view it as a deliberate attempt to intimidate and discourage participation in the settlement program, and the opposition brief goes on to state this will be the result should the Court rule for the NFL.

Players who suffer from dementia shouldn’t be punished for the condition that prompted their claim in the first place. The affected players suffer from learning and memory deficits and no reasonable person could justify penalizing the impaired because of their impairments.  He asserted that the NFL’s attempts were wrong and unjust.  I agree.  I hope the Court will also view these players with reason and compassion.  I can’t think of anything more evil than to take a cognitively impaired person and toss him in prison because of his failing memory simply because he had the audacity to apply for the benefits he was promised, and then forever deny the promised compensation, jeopardizing the future of his entire family.  I view this as a soulless act of cruelty that endangers the very lives of these men.

Most of Judge Brody’s rulings related to NFL objections, generally through sua sponte orders or “implementation determinations” have granted the NFL multiple vantage points that were not part of the negotiated balances incorporated into the Settlement Agreement.  She has dismissed all Class Counsel except Chris Seeger, so he alone bears responsibility for defending the retired players from the corporate giant that seeks to devour them.  His opposition brief was forceful and persuasive.  It’s my hope that he’s learned that any compromise with the NFL is costly and ill-advised.  Lives and futures are at stake here in an unprecedented way.

It seems ironic that Advocacy for Fairness in Sports obtained evidence of the NFL’s plot during Hall of Fame week.  Today new players will be enshrined in the Hall, celebrating their achievements on the field of play.  I have to wonder if some of these same players should be stricken with dementia and file a settlement claim at some point if the NFL would seek to send them to prison too?  You don’t have to look far for the answer to that question.

Beloved Hall of Famer Nick Buoniconti passed away this week after a long, public struggle with dementia and CTE symptoms.  His friend, Bob Costas was quoted in a New York Times story as saying, “He was an exceptionally accomplished and charismatic man, and toward the end, his understanding of the gap between what he had been and what he now was, was almost too much for him to bear.” Prior to his death, Buoniconti said, “The NFL is only in it for the money…I’m really angry because they’ve turned their backs on us and it’s not a responsible way to do things.”

Sadly the NFL seems intent on proving him correct.

Permanent link to this article: https://advocacyforfairnessinsports.org/nfl-concussion-settlement/exclusive-nfl-wants-to-send-former-players-to-prison/