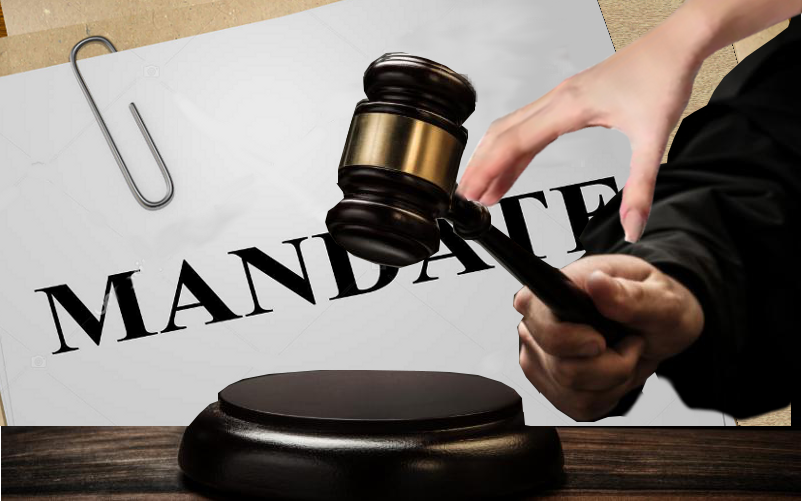 It seems settlement funders are just as fond of weekend dumps as anyone else.  On Friday Thrivest Specialty Funding filed a letter to Judge Brody inquiring as to why the Claim Administrator isn’t in compliance with a Third Circuit mandate.

On April 26, the Third Circuit Court of Appeals issued an opinion marked “PRECEDENTIAL” in several matters related to settlement funding and the NFL Concussion Settlement.   As I wrote shortly after the opinion was issued, most of Judge Brody’s rulings relating to settlement funding were reversed and remanded with instruction to follow the appellate ruling.  The only part of the order that survived appeal was a narrow window upholding the prohibition of true, claims assignments with true being the operative word.

The Third Circuit Panel carefully defined what should be considered as a true assignment and what should not.  Here are several relevant excerpts from the opinion. 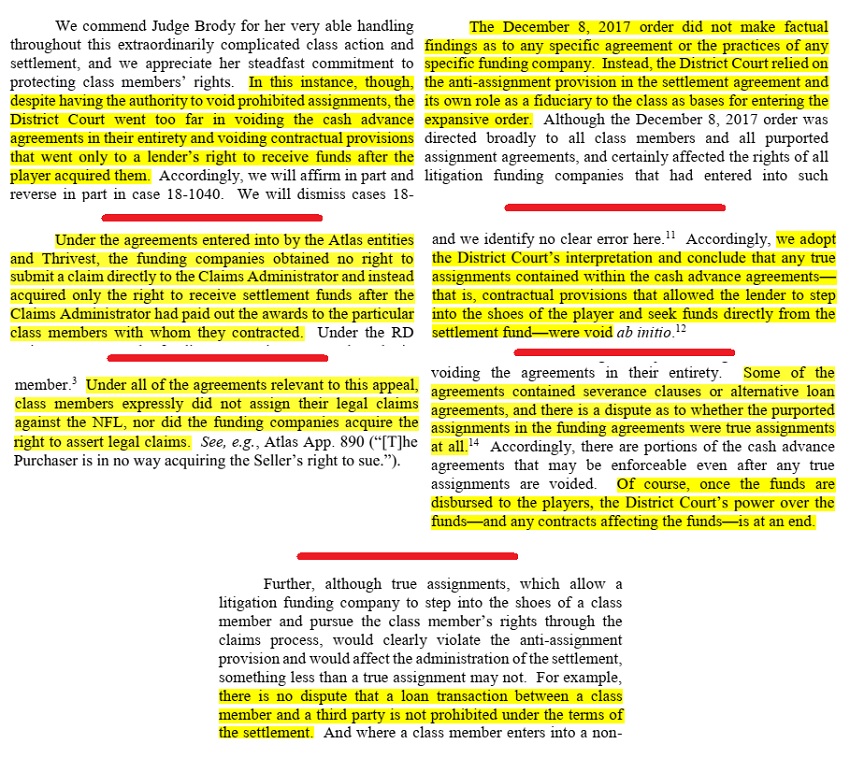 In these snips and other examples, the Third Circuit Panel explained that contracts in which a funder steps into the player’s shoes and attempts to recover directly from the defendant or claims administrator constitute true assignments that are voided under the settlement agreement.  Contracts that do not involve the defendant or claims administrator are not true assignments, but rather advances or loans that must be repaid independent of the Claims Administrator.  In most instances, a player’s lawyer is required to disburse funds to the lender after a player’s award has been issued and this is not prohibited.

This is the gist of Thrivest’s letter to Judge Brody:

The letter states that the revised “Rules Governing Assignment of Claims” still refers to all funding arrangements as prohibited assignments, although the Rules posted on the website have not been revised with the May 31, 2019 version apparently still in effect.

The letter also notes Claims Administrator BrownGreer’s May 31 Status Report and how it still refers to Judge Brody’s December 8, 2017 Order as defining prohibited assignments.  Specifically, this is what the Status Report says:

Orran Brown continues in his Status Report to explain in detail how he carries out Judge Brody’s order, including how he attempts to get the lender to enter into rescission.  Not as much as a nod is granted to the Third Circuit ruling, however, almost as if ignoring it will make it go away.  While this may appear to be good for Class Members who’ve taken advances (spoiler: appearances can be deceiving; it isn’t), it’s troubling nonetheless that the district court has all but defied an appellate court mandate.  Perhaps it also explains why Judge Brody has played fast and loose with certain settlement provisions such as the generally consistent standard of evaluation of pre-effective date claims, AAP review only on the back end of claims, and restrictions related to MAF doctors.

MDL Judges are vested with an enormous amount of power, but as the Third Circuit determined in the first section of the snip below, it isn’t limitless. 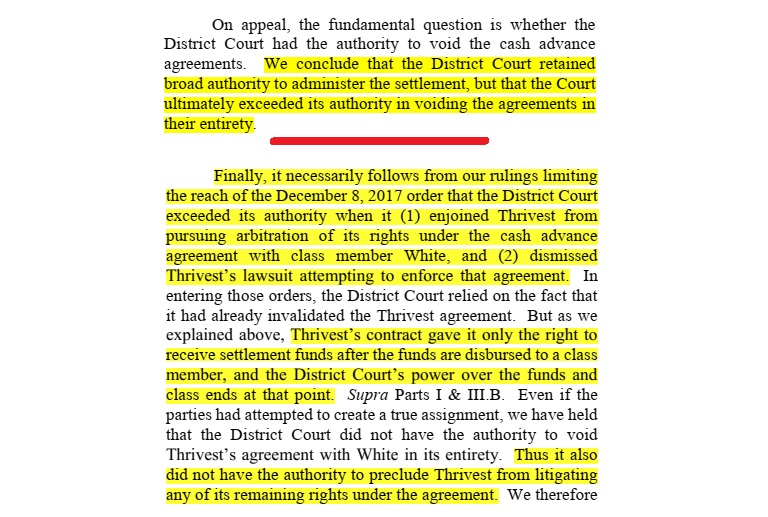 The second snip relates to the Third Circuit’s reversal of an order in which Judge Brody enjoined Thrivest from pursuing arbitration with a Class Member, William White.  On June 5, Brody was forced to rule on a nearly identical dispute between Thrivest and another Class Member, Toby Wright.  In compelling arbitration, it seemed Judge Brody facilely complied with the Third Circuit mandate without offering any acknowledgment of it as I explained in an article written shortly after the ruling.

From Thrivest’s letter to the Court:

Thrivest writes that it is “concerned that the Claims Administrator has not incorporated the Third Circuit’s ruling into its work, and instead continues to regard all funding agreements as ‘Prohibited Assignments.'”  Thrivest also makes an extremely valid point with this statement:

This is my greatest concern.  I’m no fan of predatory lending and wish the federal government would enact stronger regulations to protect injured plaintiffs such as the retired players in this action, but it’s not the courts’ role to legislate, but rather to examine, interpret, and uphold the laws currently in place.  That said, the settlement funding industry would not exist without a need for it.  Many players and other injured plaintiffs in other litigation are at the end of their financial ropes.  Their savings are gone and their credit is shot, leaving them without alternatives if they are faced with eviction, foreclosure, or pressing medical needs.  They should not be further disadvantaged through deceit on the part of the court and/or claims administrator and led to believe the contracts they entered into are now void when per the Third Circuit, they are not.

As Thrivest points out, this will only lead to increased fees and interest that Class Members will ultimately be held responsible for, further decimating their awards and in some instances, leaving them in worse shape than they were in prior to taking the advances, and turning their eventual awards into a penalty.  While in most instances, it is Judge Brody’s April 8 order that is now void, the Third Circuit indicated that players are not entirely without options.

The Third Circuit did not discount other methods of possible relieve to Class Members under existing laws governing, “unconscionability, fraud, or usury based on the high effective interest rates in the agreements and arguments by both class counsel and the CFPB that the agreements are disguised predatory loans, rather than true assignments,” and by all means Class Members should receive assistance in pursuing any legal method of relief under federal or state law.  They should not, however, be duped by the Court and Claims Administrator into falsely clinging to an avenue of relief that has been struck down in a precedential appeals court opinion.

While there is no requirement as to when a district court judge must sign off on an appellate court mandate, the rules of judicial conduct do not permit a lower court to ignore or defy a mandate.  As of now, Judge Brody has not signed off on the mandate nor has she affirmatively acknowledged it.

It will be interesting to observe the next steps as they unfold.  Should Judge Brody fail to grant Thrivest’s request for a hearing, and following that hearing order the Claims Administrator to comply with the Third Circuit, the next step for Thrivest would be to seek a writ of mandamus from the Third Circuit asking the appellate court to enforce its mandate.   There’s no wiggle room here, and as such, it’s been difficult to find instances of noncompliance or what the repercussions of noncompliance might be.

I’ve requested comment from multiple law professors and an experienced appellate attorney to speculate as to what might happen if this occurred and to point to any factors I may have overlooked.  As of now, none of the attorneys immediately responded to my request.  Should I hear back with relevant insights, I’ll update accordingly.