According to ongoing and recent NFL concussion settlement filings, a ruse of epic proportions threatens to devastate some former players who found themselves caught in an intricate web of deceit.

A letter to the Court filed on August 1 states that ten former players were persuaded to transfer their retirement savings to Cambridge Capital, on promises of greater returns than their current portfolios produced.  Instead, it seems they were cleverly conned out of the entirety of their life’s savings.

A sealed document submitted with the letter as “Exhibit A” contained the information Cambridge provided. While its impossible to know what is contained in Exhibit A, the letter states that account balances were not provided and feared depleted.

You may be thinking at this point, “this is terrible, but what does it have to do with the concussion settlement?”

In a transcript of a July 11 teleconference, Seeger Weiss attorney TerriAnne Benedetto stated: 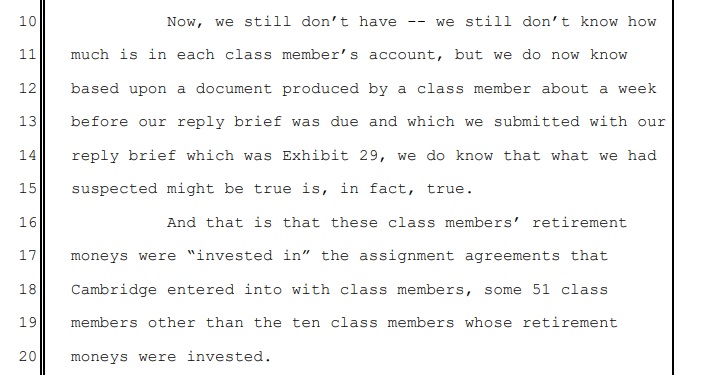 Benedetto added, regarding the retirement account balances, “We fear that it’s either zero or close to that because they used their money to pay these advances under the now void assignment agreements.” She was speaking in reference to a December order in which Judge Brody declared assignment of claims to a third-party lender to be in conflict with settlement terms, and therefore any agreements that had been made were voided.

Ms. Benedetto’s reply, alluded to the difficulties players are facing in receiving an award for their claims.  “Assuming that Cambridge is willing to enter into the rescission that’s provided for in Your Honor’s December 8th order and also only at such time when these…class members…actually get a monetary award. Some of those, it might not be for years from now…if ever.”  She added that she feared, “these gentlemen’s retirement moneys are gone.”

John Leonard, the lawyer representing Cambridge Capital told the Court they were trying to assemble the information, but in trying to justify the delays, admitted that a man named Don Reinhard, who is now incarcerated had been handling the so-called investments and absconded with the records prior to his conviction.

The drama playing out now is the result of what appears to be a devious circular scheme led by attorney Tim Howard.

Like many attorneys, in the time leading up to final settlement approval and a protracted period afterward, a mad-hatter’s dash took place to locate retired NFL players and secure their agreement for services as independent counsel for their concussion settlement claims.  The feeding frenzy, as Ken Belson of the New York Times called it, was an example of the legal profession at its worst, as lawyers fought and snatched clients from other lawyers by undercutting their fees and predatory lenders found easy marks in the neurologically impaired players.

Howard is alleged to have worked every possible angle.  In 2015, the same year the settlement was approved Howard established Cambridge Entities, an “investment” firm based on providing litigation funding advances, with the NFL retirees as his primary target. It was also in 2015 that he convinced ten players who were fortunate as to have some savings to retain him as counsel and then to move their investments to Cambridge where he allegedly used their money to provide non-recourse loans to other players he was able to locate who were struggling financially and open to the high interest advances on the settlement awards they believed they’d eventually qualify for.

After Judge Brody ruled the advances illegal in accordance with settlement terms, and in doing so voiding the agreements, Cambridge appeared to be desperate to recoup the money they’d advanced as pointed out in a motion filed on January 26 by Co-Lead Class Counsel.

An accompanying declaration details what transpired with a player referenced by the pseudonym, “Mr. Smith.”

Smith reported that he’d been contacted by representatives of Cambridge stating that as a result of the court order, he was required to pay back his advance immediately and asserted, “Cambridge intended to take ownership of portions of the Class Members’ retirement funds (and/or the interest therefrom) that the Class Members had placed with Cambridge as Investments (Individual Retirement Account (“IRA”) rollover monies from the NFL’s or its Member Clubs’ 401(k) Plan(s)) as repayment as to those who could not otherwise immediately repay Cambridge the advanced monies.”

On December 21, 2017, Smith recorded a call from Cambridge representatives Addys Walker and Gail Milon, who is Managing Vice President for Cambridge Capital Group. A copy of the audio was sent to class counsel and transcribed.  Judge Brody’s order that offered rescission to funders who would accept repayment of advances without interest when a settlement member received an award was contorted as to demand immediate repayment in full. 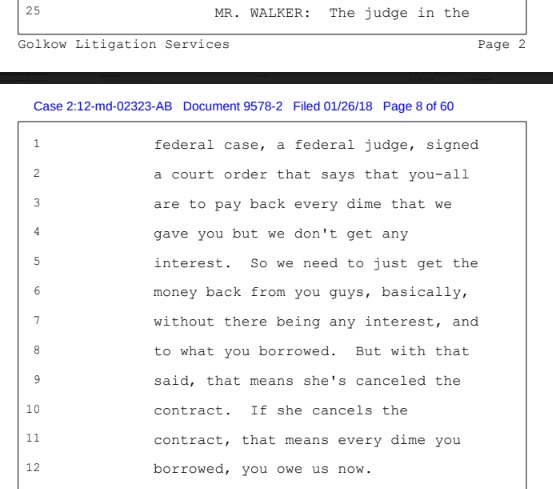 While not expressly stated in other court documents, based on the transcript, it appears that Smith both invested his 401K with Cambridge and received an advance. Walker told him that he would have to forfeit the money he invested.  Smith, who is neurologically impaired had a hard time following so he put his wife on the phone.  Then Walker upped the ante.

Walker told Mrs. Smith that they owed more money than they had in their account.  She asked about a substantial amount of interest that she believed had been accrued. Walker told her it didn’t exist.

A lawsuit filed in Florida by another player, Corey Fuller, with his wife indicates they too have lost their investment, though apparently they never took an advance from Cambridge.

In the lawsuit they point out that they were led to believe their money would be invested in mortgages, and not litigation funding advances and state they were never informed their assets were being managed by person convicted of fraud.

On August 13, Chris Seeger filed an updated status report with the court, accompanied by Exhibits “A” and “B” which indicated that the data submitted previously by Cambridge was inaccurate and could not be used.  Among the inaccuracies claimed was an indication of 41 player “investors” rather than ten.  It’s difficult to estimate the amount of damage done until authentic documents are obtained, if they even still exist.

A final twist in the plot-line runs parallel to the players in the settlement.  The initial status report revealed discovery of a recent complaint to the Florida Bar Association against attorney Tim Howard, filed by another lawyer who claims he was conned into working for Howard and then defrauded of the pay he was promised.  The complaint also includes Ankur Mehta, whom Howard allegedly used for funneling and diverting money. 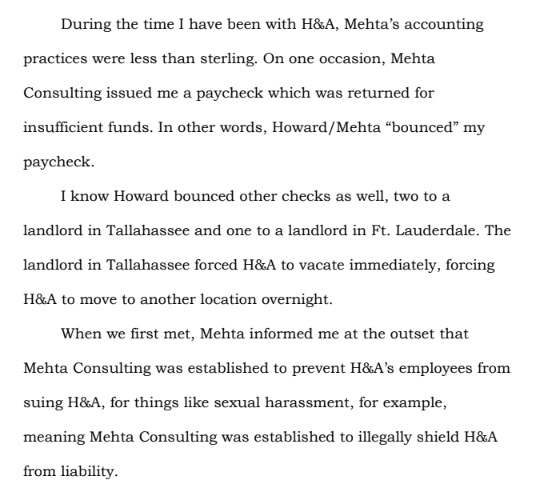 Suffice it to say, the complaint makes for interesting reading and provides additional evidence as to the questionable business practices of Tim Howard and Cambridge Capital.

I’ve written many articles critical of Chris Seeger’s performance in the implementation of the concussion settlement, but at least in this instance, it appears he’s earning his money in dealing with Cambridge. For the good of the ten (or however many)  players whose life-savings hang in the balance, I hope that he’s able to secure a return of their investments.

It’s unfortunate for everyone involved that the third-party lender narrative has turned into a three-ring-circus, that could have easily been prevented at the onset of settlement negotiations.  Had it been dealt with properly from the beginning, none of the confusion regarding advances would have taken place, no players would have been swindled, and the need for hundreds of hours in legal fees that will be born by the class of retired players could have been prevented.  The assignment clause which Judge Brody referred to as “unambiguous” in her order voiding claim assignments reads as follows:

If interpreted according to a plain reading it might appear to be unambiguous but if compared to nearly identical clauses in other settlements where deals with settlement funders were allowed the meaning is anything but clear.  Clauses such as this are normally included in settlements to protect the defendant from having to pay the same claim more than once should a plaintiff sell all or part of his interest.  Further muddying the water is the fact that Esquire Bank, with whom Seeger served on the board of directors and actively solicited business for from attorneys representing players in the settlement was through an unpublished Special Masters ruling exempted from the clause leading to an appearance of his working to weaken Esquire’s competitors.

While Esquire’s assignment language wasn’t discernable from the lenders whose contracts were voided, the apparent logic in exempting Esquire is that instead of the predatory rates charged by most lenders, Esquire charges only 9% interest.  My research has located one other funder with comparable rates that are even lower that those charged by Esquire but to my knowledge, no players received advances from that lender.

Settlement class members should be able to procure advances if their homes are in danger of foreclosure or another pressing need doesn’t give them the luxury of time to wait for claim approval.  Now this option has been eliminated.  It is equally true that they should not be prey to financial predators.

The addition of one little phrase, “or lenders/funders charging interest in an amount greater than 10% simple interest” (or other amount deemed acceptable by the Parties and Court) could have averted the entire problem.

Perhaps someone reading this will take note of the suggestion and present it as an amendment, which could be done with notice to the class. Since this has no bearing on the NFL, it is unlikely there would be an objection.  Will it happen? Probably not.

Permanent link to this article: https://advocacyforfairnessinsports.org/nfl-concussion-settlement/group-of-retired-nfl-players-caught-in-web-of-financial-deceit/