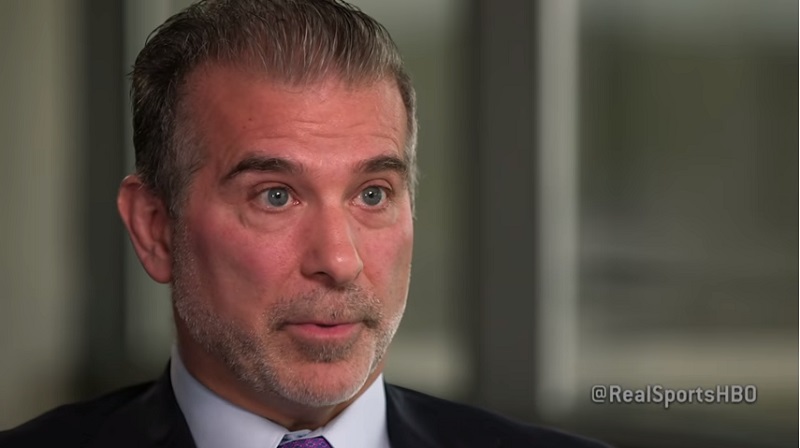 The settlement, estimated at $1 billion states that claims for players living with Alzheimer’s disease, Parkinson’s, ALS, and dementia are compensable, but as the settlement moves into the second year of claims processing, the vast majority of paid claims have been for ALS and Death with CTE, leaving many retirees with other longstanding diagnoses out in the cold.

One of those players is Scot Brantley, an 8-year NFL veteran, who was first diagnosed with dementia in 2012 and later with Alzheimer’s disease.  Jon Frankel interviewed Scot Brantley and his wife, Mary about their experiences:

As HBO reported, though Brantley was diagnosed by numerous doctors and receives Social Security Disability because the federal government acknowledges the legitimacy of his condition the NFL does not.  Among the reasons excuses given by the NFL is that Brantley purportedly has a job.

Mrs. Brantley clarifies that his “job” consisted of appearing with a friend who was a local radio host several years back – an act of friendship to try and keep Brantley somewhat active and get him out of the house.

Brantley is far from alone.  HBO also interviewed Ken Callicutt, who like Brantley was an NFL linebacker who is now suffering from Alzheimer’s.

Though he requires a full-time caregiver, the NFL isn’t convinced.  They state the reason for Callicutt’s impairment is the medications he takes – medications that were prescribed for him for the physical injuries he sustained while playing football.One of the express provisions of the settlement was that football causation did not have to be demonstrated in order to qualify for an award.  In the November 19, 2014 Fairness Hearing just prior to settlement approval NFL attorney Brad Karp testified:

Who is defrauding whom?  Other players who have experienced CTE related symptoms and filed claims in the settlement have been denied because CTE – the primary condition that precipitated the lawsuits that were consolidated into the settlement was not included.

Dr. Wayne Gordon of Mt. Sinai Hospital in New York, and one of the nation’s top neuropsychologists was one of the doctors who examined and diagnosed Lippett.

Another settlement flaw pointed out by Jon Frankel and HBO is that only a very small window of Death with CTE claims will be recognized in the settlement.  Outside that window is the family of Iron Mike Webster, the first player to be diagnosed with CTE.  Despite five doctors concurring that Webster was too cognitively impaired to work and earn a living, the NFL denied him disability until he died at age 50 in 2002, at which time Dr. Bennet Omalu discovered the tau proteins that entangled his brain.The NFL refused to compensate him prior to his death and now they refuse to compensate his family.  Webster’s widow, Pam, now lives out of suitcases, traveling from the home of one friend to the next while their son delivers pizza in order to make ends meet.

Frankel questioned Chis Seeger as to why the Webster’s would not be compensated:

Though Seeger says, “it was attempted,” since the lawsuit would not even exist with out Mike Webster, it seems clear that his unsuccessful attempts were weak at best.  On the other hand, Seeger was very successful in securing $112.5 million from the NFL in fees for Class Counsel, of which Seeger is slated to receive approximately $70.4 million.  Frankel inquires of Seeger as to why he should be reaping the windfall when so many players have been left out in the cold.  Seeger’s response: “If you’re asking me is the fact that some people are not happy with the settlement if that’s the basis for me not getting paid, that would be a pretty high bar that I don’t think many lawyers could clear. I think, generally, that we’ve done a very good job, merely based on the fact that we have forced the NFL to pay a lot more than anybody thought they would.”Though Seeger claims that the NFL has exaggerated claims of fraud, he supported their motion to appoint a special fraud investigator which other attorneys have pointed out will only serve to further impede and delay claims.  In fact, since the settlement implementation commenced and claims processing began, Seeger has not opposed a single motion filed by the NFL, nor has he supported any motion filed by other attorneys who sought to interpret the settlement as written and presented to the players.In the Fairness Hearing prior to settlement approval Seeger stated:

This has not been the reality of the settlement.  Claims for Levels 1.5 and 2.0 neurocognitive impairment are being held to a rigid standard of extremely severe impairment according to documents examined by Advocacy for Fairness in Sports – a standard so rigid that a player, if he is able to put on a pair of trousers without assistance, regardless of if he remembers his name or not, or how old he is probably won’t qualify for a monetary award – just like Scot Brantley and Ken Callicutt didn’t qualify.As Seeger guards the party paying his own award, it’s fair to ask once again, who’s defrauding whom?