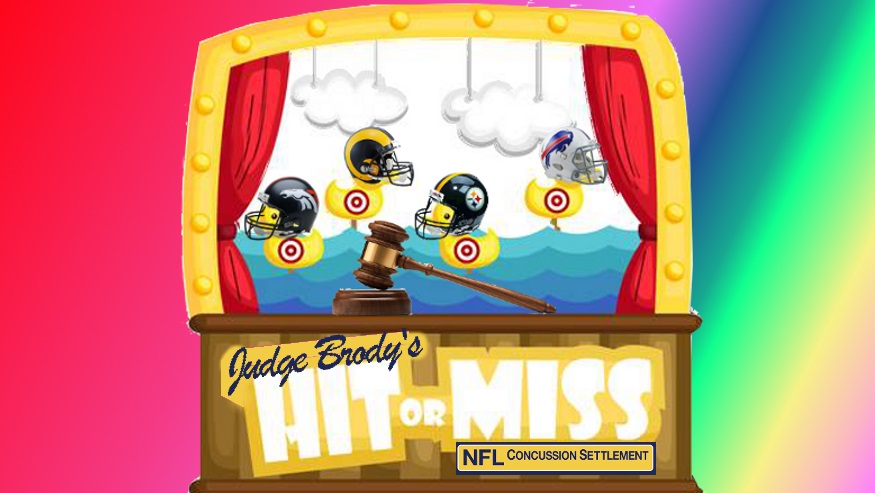 On Thursday, Judge Anita Brody ordered former Rams and Redskins safety Toby Wright to arbitration with Thrivest Specialty funding.  That she ordered the player to arbitration isn’t surprising considering an April 26 ruling by the Third Circuit, vacating her ruling that enjoined Thrivest from pursuing arbitration against a different player and her dismissal of Thrivest’s complaint against him, the tone of her order is somewhat curious.

Thread:
In her order, Judge Brody seems to be simultaneously giving a nod to the Third Circuit decision which overturned most of her order without actually citing it, and in other places ignoring or defying it.
Order PDF: https://t.co/rphiuVfxEA https://t.co/dXZ740dC6y

While her ruling is completely opposite her ruling in a near identical situation with settlement class member William White, that was vacated by the Third Circuit, she makes no mention of Third Circuit authority, jumping straight to a Supreme Court case that she cites in the footnotes. 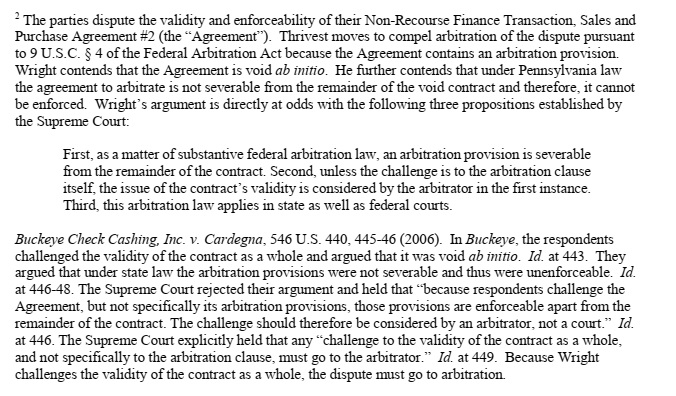 While there’s certainly nothing unusual about a judge citing Supreme Court authority, her prior ruling pertaining to White conflicts with the cited authority she uses in the Wright order.  The tone of her order would seem to indicate a passive stance of defiance of the appellate court’s opinion that is nowhere noted in her text.

The Third Circuit Panel described the situation with White, which they reversed. The circumstances forcing a decision on arbitration were virtually identical.

In a different footnote, Judge Brody asserts her authority to preside over “the entire action,” which may conflict with the higher court opinion, which sought to define the boundaries of the power of a federal judge over a class action settlement, or at least the settlement’s authority over non-parties.

As noted in the opinion the Third Circuit found that the district court judge “retained broad authority to administer the settlement” but also found that she exceeded that authority in voiding funding agreements in their entirety.

Perhaps footnote 1 was a reminder of her authority and the Supreme Court citation in footnote 2 was an attempt to maintain her ruling through considering the arbitration agreement severable from the remainder of the contract.  These excerpts from the Third Circuit opinion, draw limits to her ability to regulate non-parties to the agreement. 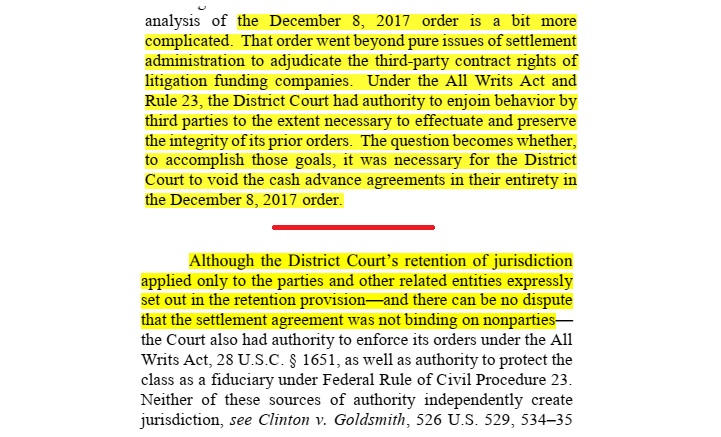 Upon examination of the matter, the Third Circuit logically looked at the settlement language regarding claim assignments.

The highlighted phrase, “and the Claims Administrator shall not recognize any such action,” is the key to the ruling and the boundary of Judge Brody’s authority.  The key rested in defining what constitutes a “true assignment” which through the settlement language she does have authority to void, and what does not, and therefore outside her jurisdiction.

The Court of Appeals held that in a true assignment, the player would have agreed to provisions that allowed Thrivest to step into his shoes and seek funds directly from the NFL through the claims administrator.  Upon examination of the agreements the Third Circuit held that Judge Brody, through her December 8, 2017 order did not make factual findings in this regard.

These are the relevant excerpts from a Thrivest contract:

“Buyer” refers to Thrivest and clearly states that “the Buyer is in no way acquiring the Seller’s right to sue.”  “Seller” references the player/class member and acknowledges that the Buyer has no right to influence the Seller and his attorney regarding claim decisions.  The highlighted portion indicates that the player authorizes his attorney, and not the claims administrator, to disburse payment of the debt to the Buyer (Thrivest).

Funders are well aware that most settlements contain assignment clauses with language nearly identical to that in the NFL settlement, and that the clauses are included to protect the defendant, in this instance, the NFL from anyone aside from the player or his representative asserting a claim against them.  All the contracts I’ve seen are quite similar to Thrivest’s contract which the Third Circuit deemed not a true assignment.

The Third Circuit clearly stated that the District Court does not have authority over settlement proceeds after they are disbursed to a player.

It did not offer an opinion as to what if any aspects of the agreements might be subject to challenge but indicated that the challenges would likely occur on an individual basis.

Here’s where things get interesting.

Judge Brody compelled Mr. Wright to arbitrate with Thrivest, but at the conclusion of the arbitration, the parties are ordered to report back to her.  In contrast with the White dispute, she did not dismiss the case but seems to be trying to retain jurisdiction as indicated in footnote 1.

After the Third Circuit entered their opinion, the funding companies declared victory but oddly so did Co-Lead Class Counsel Christopher Seeger.  Per Law360:

Say what?  “Funding companies that say their cash advances are not assignments” – it wasn’t just the funding companies, the Third Circuit agreed, and while I detest predatory lending practices, I’m still of the opinion that contracts should be interpreted in accordance with their clear language.  The clear language indicates the agreements are not assignments under the authority of the court (or Chris Seeger.)

As I wrote shortly after the Third Circuit opinion was released, there’s a very interesting backstory on the funding saga and Seeger’s ties to the funding industry.  Correctly or not, Seeger’s zeal in pursuing funding companies while soliciting funding business for Esquire Bank, of which he was a board member through 2016, give an appearance of trying to eliminate Esquire’s competition for personal gain.  Even if Seeger no longer holds stock in Esquire or has severed his affiliation he is currently profiting by litigating against Esquire’s competitors.

The NFL agreed to $112.5 million in common benefit fees for class counsel.  On May 24, 2018, Judge Brody awarded attorney fees for common benefit work done prior to the settlement effective date in the amount of $85,619,446.79, leaving $22,823,253.33 in the common benefit fund.  Seeger received almost $52 million with 26 firms splitting the other $33 million.  Since then two post-effective date fee petitions totally over $12.6 million have been submitted and it appears the majority of the work has been in litigating against the funders.  Of the $1.4 million allocated to other firms, it appears most has also focused on litigating funding issues.  Considering the difficulty of getting dementia claims approved and countering the NFL’s relentless allegations of massive fraud, it would seem that the time and money would be more prudently used for issues affecting over half of the class of retired NFL players rather than the relatively small percentage who have taken advances in anticipation of an award.

Unfortunately, I don’t see the issue coming to resolution at any time in the near future.

Based on Seeger’s statement and Judge Brody’s determination to keep the Wright dispute under her jurisdiction I predict the next developments will look something like this:

Players like Toby Wright believed, based on Judge Brody’s order that they were no longer obligated to the funders they’d entered into contracts with and this explains why Wright challenged the validity of the entire contract as Judge Brody stated in footnote 2.

While her ruling voiding the agreements looked like a gift, in retrospect it seems it was just another Trojan horse.  Like so many things with the settlement, the “gift” wasn’t what it appeared to be and the litigation surrounding the funding and delay of disbursements has only added to the interest players now owe.  Consider this sample agreement that one player entered into with Thrivest. 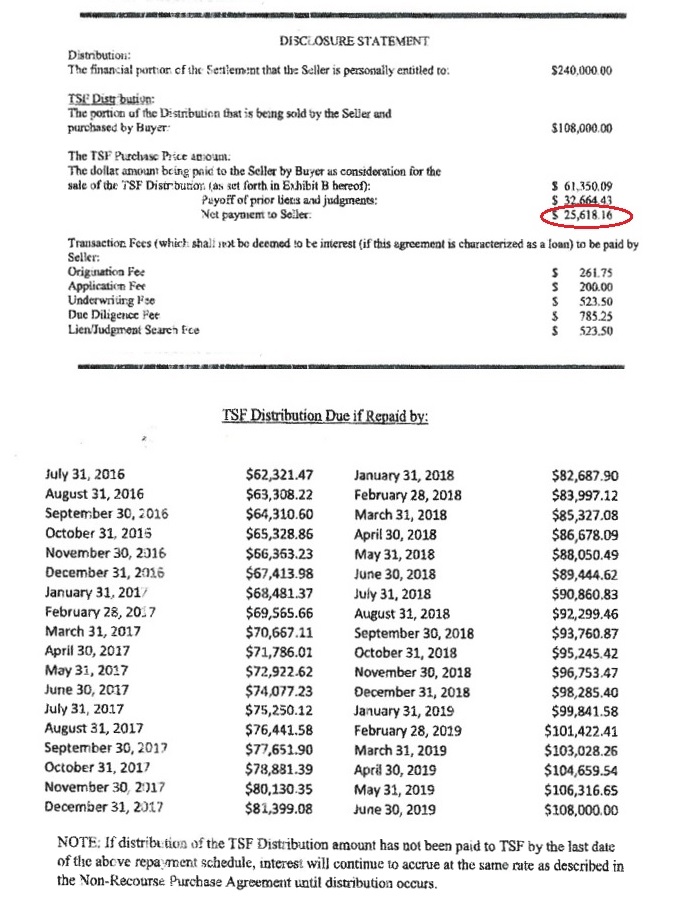 A player who expected to receive $240,000 based on age and diagnosis calculations took an advance of $61,350.09 in the summer of 2016.  It appears he had a lien that he needed to satisfy in the amount of $32,664.43, leaving him a net of $25,618.15 in actual funds he received from Thrivest.  As you can see from looking at the repayment schedule, interest quickly began accruing at nearly $10,000 per month!  Now, three years later, if the player’s award has been issued but the Thrivest debt has not been satisfied because it was withheld by the claims administrator, he now owes $108,000 with interest still continuing to accrue—only now at almost $15,000 per month.

Settlement funding is a largely unregulated industry in which consumer protections that most commercial lenders must abide by are inapplicable.  Though it’s understandable that interest rates would be substantially higher than prime for high-risk loans, it would be difficult to argue that the advances aren’t predatory.  Still, someone might find the terms preferable to losing a home or facing eviction or perhaps forfeiting necessary medical treatment.

The court would have been much more merciful in not intervening and confusing players and lenders, alike as to the status of the advances.  For some players, the court’s interference has cost them tens of thousands of dollars in interest.  As the Third Circuit indicated, players individually might have grounds to challenge the terms of the advances had the natural course of things played out.  While some players did benefit from the negotiation that Locks hammered out before he was fired, capping interest at 10% annually, the person who has benefited the most from the funder litigation is Chris Seeger. 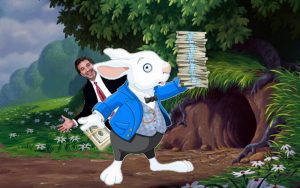 Judge Brody’s tone and demeanor have shifted considerably as implementation has progressed into the second year, displaying little concern for players, while protecting the NFL from overblown claims of fraud like a hen protects her chicks. Here’s hoping that Seeger, who is now the sole attorney representing the class, will shift his focus to getting claims paid, and stopping the endless delays of excessive audits, instead of chasing white rabbits in bankers’ suits through endless rabbit holes.