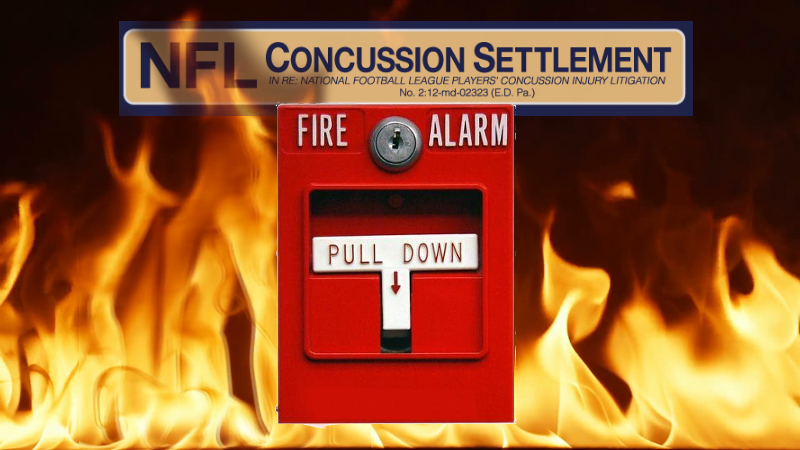 Daunting. Despicable. Dirty. Disastrous.   Those are just a few adjectives that come to mind when evaluating the NFL’s torrent of delays and denials of brain injury claims brought by former NFL players.  Mentally impaired men and their anxious families have been forced to jump through unconscionable hoops and endure painful audits, delays and denials while finding themselves accused of being liars and frauds by the league they once loved and sacrificed their health for.

The most recent claims report issued January 8, shows how once thought to be settled litigation  has devolved into a literal war zone with retired players’ lives and security at stake against the NFL’s win at all cost mentality.  These guys have been here before.  They have had to battle the disability plan established between their union and the league and in most cases have been denied on technicalities rather than medical reasons and those who finally secured benefits had to endure court battles that were in a state of appeals for up to a decade!  Co-Lead Counsel Chris Seeger assured them time and time again this would never happen in the Settlement and that it would be nothing like disability.  Whether Seeger intentionally lied to the class of retired players or not is debatable but this much is apparent.  The Settlement claims process is even worse.

1,581 total claims for monetary awards have been submitted between March 2017 and January 2018, and 67 checks have been issued, which equates to .04 percent paid!  Less than one half of a percent of players with submitted claims have in one month short of a year of processing received a check!  In contrast the NFL projected it would pay 765 claims the first year.  Where are the other 698?  As of January 8, 207 claims had been approved, but the majority of these are held in the NFL’s audits and appeals, causing painful delays for even the rare claims that have been approved.

While Death with CTE and ALS claims have fared substantially better than other diagnoses, even these claims are being impeded.  Pathology has been challenged in at least 26 CTE diagnoses, 4 of which have resulted in denial.

Those “lucky” enough to have been diagnosed with ALS find themselves at the highest approval rate of 57%.  While so far no ALS claimants have actually been denied, only 11 of 18 approved claims have actually been paid with nearly half of the submitted claims still held up in audits or on technicalities.  According to the wife of a player with ALS who has not yet been approved, the claims office told her that “We don’t doubt he has ALS, but the paperwork isn’t exactly right.”  How can anyone believe it’s appropriate to further torture someone who is victim to one of mankind’s cruelest diseases?

The January 8, 2018 Claims Report is embedded below in its entirety.

In comparing the current status report from the one published on December 11, you can determine that 16 claims were approved and 6 paid in approximately a month’s time.  If you multiply 16 X 12, you could conclude that about 192 claims would be processed in a year’s time taking 8 years to handle the current caseload.  Even if you average using the 269 claims processed in the first eleven months it would take almost 5 ½ years.  And the process seems to be getting slower rather than faster, as was promised early on.

Perhaps this is why Judge Brody, in an order issued the same day the claims report was released appointed attorney Dennis Suplee as counsel to pro se class members.  The order reads:

“In the process of administering the Class Action Settlement Agreement, the Court finds it is necessary to appoint counsel for pro se class members. The Court appoints Dennis R. Suplee, Esquire, to represent these pro se Settlement Class Members where there has been a demonstrated need for legal counsel.”

The order leaves many unanswered questions.  One would hope that Judge Brody, appointed Mr. Suplee in a sincere effort to help a Class that has been constantly told that they don’t need their own lawyer, who are trying to deal with a settlement that has become a nightmare for even the most experienced attorneys.

But wasn’t this Chris Seeger’s job?  Doesn’t she feel he is capable of doing it?  Perhaps Mr. Seeger, having already been guaranteed a large payday in claiming the bulk of the $112.5 million common fee fund agreed to by the NFL, doesn’t want to put the effort into straightening out the claims process unless he gets another “bucket of money” to do so. Perhaps since all other attorneys, including the court’s expert Professor William Rubenstein opposed the 5% holdback that Seeger demanded for “implementation work” he isn’t providing much in the way of getting implementation on track, forcing the court to appoint someone to pick up the slack?    Thus far, he along with the NFL has opposed individual counsel in their motions to administrate the Settlement as written in the Settlement Agreement.  Could this instead be another attempt to cause players to fire their own lawyers and neutralize the independent attorneys who are trying to solve problems? Could this be an effort to keep critical eyes off the fiasco the Settlement claims process has become?  Or perhaps Mr. Suplee will only be dealing with Class Members in regard to disputed attorney fees with their former lawyers as noted in the second paragraph of the order.  I’ve spoken with numerous attorneys for their impressions and no one seems quite sure.  If they aren’t certain of Mr. Suplee’s role, how are brain-damaged players to know what they should expect from him?

Like everything else in the implementation phase of the Settlement thus far, each action seems to have consequences and every answer presents more questions.  The Court and Special Masters have the authority and ability to put the settlement on track, simply by standing up to the NFL and their so called “fraud prevention” measures.  If the additional requirements the NFL has demanded were eliminated and the settlement administered as it is written and was presented to players and their attorneys, most of the problems would be solved.

Yes, the NFL does have the right to appeal and audit claims, according to the agreement, but this could be countered since the Claims Administrator also has the right to rescind the fees for Class Members to appeal as a case by case situation.  If he would do this, on a large scale for legitimate claims that are being held up unnecessarily it would equalize the playing field substantially.  Anything short of this leaves the process broken and in a continued state of emergency.