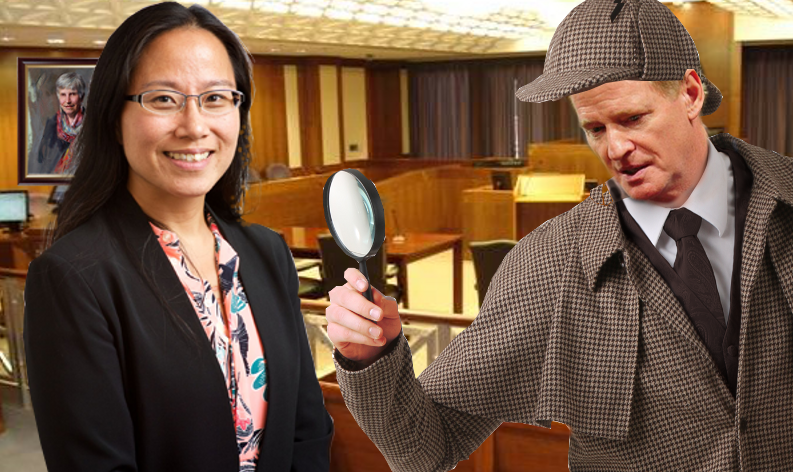 In a surprise order that appeared on the docket July 15, Judge Anita B. Brody appointed Philadelphia defense attorney Susan Lin “to advise the Court regarding the protection of participants’ rights in the investigative process.”

Ms. Lin seems highly qualified in the areas specified by Judge Brody.  She graduated from Yale Law School in 2004 and clerked for Judge Brody immediately after graduation.  From there she went on to work as a public defender and was promoted to Assistant Federal Defender in the trial and appellate units at the Federal Community Defender Office for the Eastern District of Pennsylvania. She joined her current firm, Kairys, Rudovsky, Messing, & Feinberg in 2014 and made partner in record time, adding her name to the firm’s namesake attorneys.

The work Judge Brody has planned for her seems less defined that Ms. Lin’s qualifications, however.

This is all the order stated regarding the work that Lin will be undertaking.  A face-value reading would tend to indicate that the newly appointed special master will be acting to safeguard the rights of those under audit investigations, and that could be the intent.  Nothing about this settlement to date has been a face-value proposition, however, so I’ll attempt to read between the lines while emphasizing that my thoughts are speculative and based on prior behavior patterns within the settlement, and not on any inside knowledge of the situation.

It seems possible Ms. Lin has been appointed as an advisor to the court in order to ensure that no boundaries are crossed as investigations are undertaken, leading to liability for those involved in the investigations should legal challenges present.

The NFL’s stated purpose in the appointment of a fraud investigator is to endow them with the authority of subpoenas and depositions that could determine “purposeful intent” and potentially be used in complaints with licensing and ethics boards or result in criminal investigations. To that end, the NFL has scoured the internet and social media to search for any material that might cast doubt on a player’s diagnosis as well as running extensive background checks on players to see if there is anything that resembles employment in their recent history.  Recently, the NFL has resorted to having private investigators follow and watch players to see if there is anything that could be used to discredit their diagnosis and cast doubt on their honesty.

On information and belief, the NFL has filed an objection with the court that seeks to permanently disqualify a player if they are able to catch him in omission or misrepresentation of his daily activities.  For instance, if a player says he doesn’t drive but does drive to the store a few blocks from his home, in the NFL’s view this should disqualify him from participation in the settlement along with any chance he might have for recovery to compensate for brain damage sustained from football participation.

Because of the NFL’s decades-long blitzkrieg against disability claims, players who’ve already been shortchanged by the NFL might be inclined to fudge on a detail they think could get them in trouble, such as admitting to driving, especially if it’s only on rare occasions they get behind the wheel.

Beginning in May, an activity checklist was created in which players must document virtually every aspect of their employment and social activities for the past five years.

Some players may omit or incorrectly state information due to dementia many suffer from.  If a player says he hadn’t attended any sporting events over the past year, but he attended one game and forgets, this could also be disqualifying, though this sort of thing happens quite frequently among those whose short-term memory is impaired.

If successful in their objection the NFL would disqualify vast numbers of players without having to even justify the disqualification medically.  I firmly believe this is the reasoning and motivation behind the “alert” in Chris Seeger’s letter to the Class of Retired Players that went out just prior to the July 4 holiday.

In addition to the NFL’s attempts to discredit and disqualify players, doctors and attorneys are also under scrutiny and were said to be the primary focus of Special Investigator Lawrence Stengel.  The Claims Administrator’s March Newsletter states that Stengel has enlisted a group of investigators with FBI experience in fraud, embezzlement and other crimes of corruption. 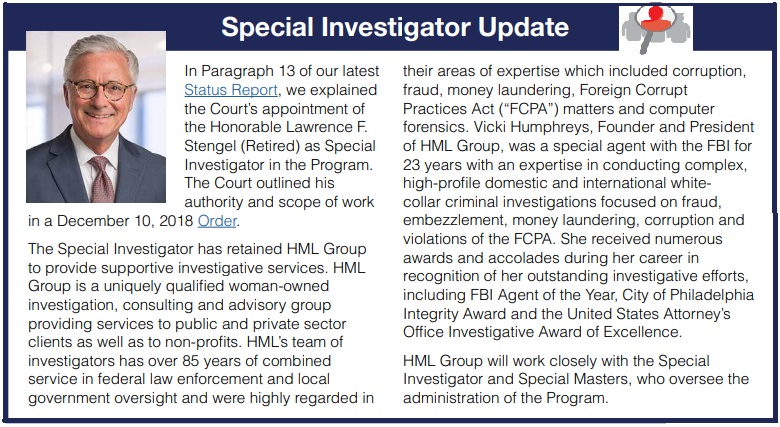 This brings us back to the purpose of Judge Brody’s order and the duties of newly appointed Special Master Lin.

While it would seem Lin’s oversight will provide at least some checks and balances, based on my observations, Judge Brody has shown little if any concern for players over last year and a half.  This was glaringly apparent at a hearing in May at which former class counsel attempted to demonstrate the harm to players inflicted by her newly adopted MAF rules.  They were fired for their efforts.  In view of this, I tend to think Judge Brody is likely more interested in protecting the investigators and ensuring that any measures taken to discredit players, doctors, or lawyers would stand scrutiny in a criminal court.  I find it feasible that Ms. Lin will be asked to play devil’s advocate and poke holes in the investigations and in so doing aid the court in shoring them up to withstand appellate scrutiny if necessary.

It’s possible that with her extensive background in criminal defense, Ms. Lin’s instincts will kick in and she might persuade the court to abandon investigations she sees as overreaching and insufficiently sustained. As it currently stands, Special Master Lin is now another wild card in an already complex chess game.

The entire order is embedded below.

Permanent link to this article: https://advocacyforfairnessinsports.org/nfl-concussion-settlement/judge-appoints-special-master-to-aid-nfl-settlement-investigations/