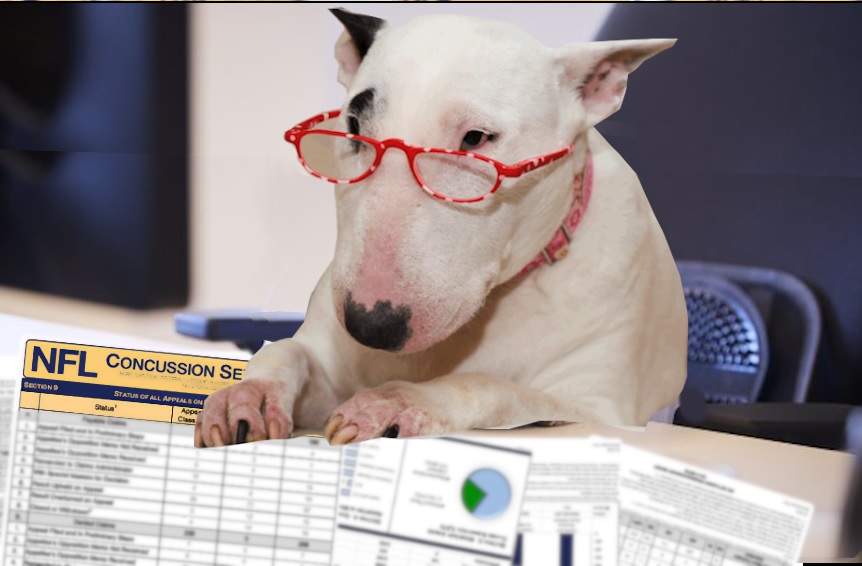 The reports provide a number of insights into the settlement both in the plain text and between its lines.  I’ve been analyzing the three reports and crunching some additional numbers.

The shortest of the status reports came from the Special Masters, Wendell Pritchett and Jo-Anne Verrier, confirming their oversight of the settlement and communication with the Claims Administrator over the first couple of pages—but then on page 3, a startling, albeit not so surprising figure if you’ve been following the settlement closely, nearly jumps off the page.

Of 4,044 players who’ve undergone complete BAP exams, only 217 were found to have a qualifying diagnosis.  That’s .05% — half of one percent of players taking a full BAP have a compensable diagnosis.  It seems that it is working as planned for the NFL, but unfortunately, not for the players who placed their trust in it.  An additional 131 players were diagnosed at Level 1, which is not compensable but does entitle the players to some medical benefits.  The Claims and BAP Administrators’ reports provide additional details.

Unfortunately, it seems that generally only the most severely suffering are receiving compensation.  While it’s good that these people have finally reached the finish line in obtaining some relief and closure, it’s troubling that for each person who does reach the finish line, a nearly impossible obstacle course presents for at least a dozen others who also need relief.  The Amon Gordon appeal and Rule 60 motion, that many had hoped would call the Third Circuit’s attention to the problems within the settlement has seen no action or rulings since it was filed nearly four months ago.

The Claims Administrator provides a lot of statistical information on approved and denied claims and appears to be based on the December 16 Summary Report.

The Claims Administrator (CA) states that as of his report, 2,933 Monetary Award Claims have been filed; 69 of those during the past quarter.  CA Table 1 provides some breakdowns.

All pre-effective date claims have now been submitted although some are still being processed.  Last year the December 3 claims reports stated 2,188 claims filed, 388 or 17.7% of which were post-effective date claims.  The new status report reflects a slight change in percentage in that 22% of claims filed are now post-effective date claims that went through a MAF physician or BAP protocols.  Note that only 179 qualifying diagnoses came through the BAP, compared with 505 through the MAF program.  242 claims were filed with no date asserted, and this is troubling.  My guess is that most if not all of those submissions came from pro se Class Members who aren’t able to determine the correct date from their medical records and will likely be denied without the help of professional counsel.  No claim will be approved without a qualifying diagnosis, dated by an examining physician.  Chart 7 shows that 85% of these claims are denied, the other 15% salvaged by determining the diagnosis and date.

Table 2 shows the claims submitted broken down by diagnoses, pre or post-effective date, and MAF vs. BAP exams.  Only Levels 1.5 and 2 Neurocognitive impairment can be diagnosed through the BAP.

Several tables and supplemental information was included in the CA Status report.  I’ve taken some of the data and worked it into some additional tables for a comparative analysis.  You can differentiate between the CA tables and ours by noting that the CA tables use a blue header and I’ve topped ours with red and also used the prefix “A”.

Table A-1 shows the number of submitted claims by diagnosis and the percentage of claims they represent.

Looking at Table A-2 is where things get interesting by comparing approvals and denials by diagnosis.

I’ve placed some additional charts in a slider:

Graph A-1 is perhaps the best illustration of the claim picture overall. 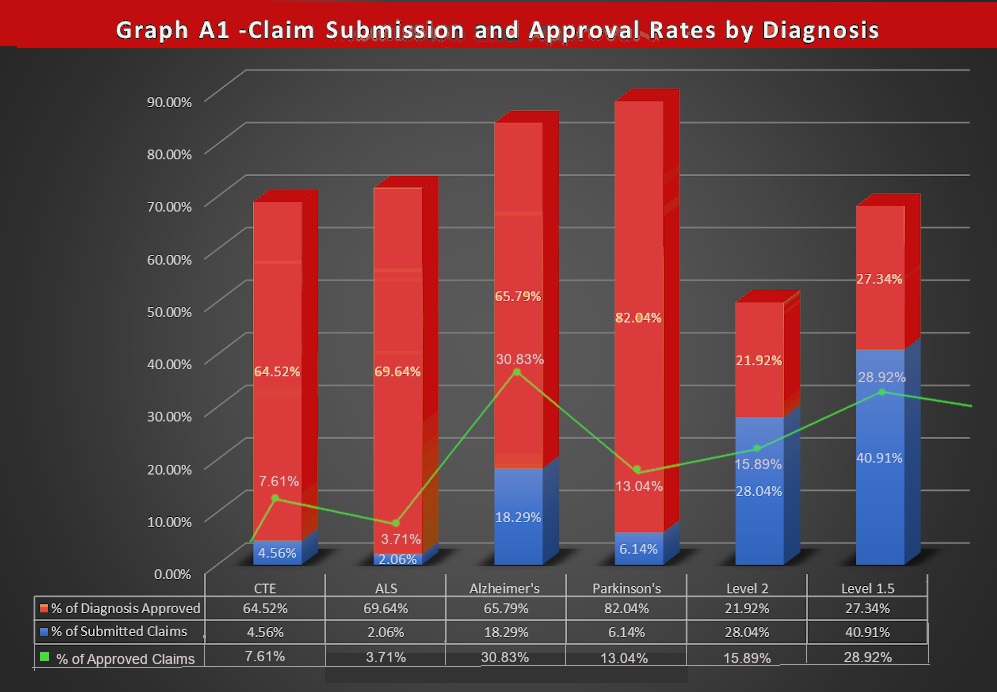 You can easily see how Levels 1.5 and 2 Neurocognitive Impairment (dementia) compose the vast majority (68.95%) of submitted claims.  Picture the blue sections of Levels 1.5 and 2 stacked on top of one another.  Then, take a look at the red columns which represent the percentage of claims approved for each diagnosis.  In the second column you’ll note that 69.64% of ALS claims have been approved.  Not refected on the chart is that only one claim was denied so for claims processed, there’s a 98% approval rate.  Those suffering from the devastation of ALS certainly deserve compensation and more, but as a numerical comparison, only 21.92% of Level 2 and 27.34% of dementia diagnoses have been approved despite the high number of claims submitted and the fact that dementia is the compensable diagnosis that the majority of retired NFL players are afflicted with–in fact–the actuaries compiled prior to the settlement correctly anticipated that dementia claims would represent the highest number of qualifying diagnoses and payouts.  The actuaries did not anticipate the large numbers of players diagnosed with CTE, ALS, and Parkinson’s disease.  Note the incidences projected in the Vasquez Report: 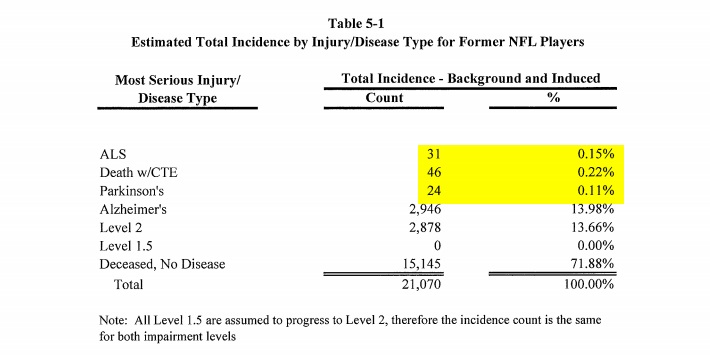 When comparing actual approved claims with projections it’s easy to see from a financial perspective why the NFL engages in a no-holds-barred war against dementia claims.  Sadly this was not how things were represented to the players.

Even with the 2020 projections, we’re still in the first week of January with 51 weeks to go to get a truly accurate comparison, but it’s very easy to see that the actuaries the settlement was based on were not terribly accurate.  Mr. Vasquez greatly under-estimated how affected by brain injury the retired NFL population is, especially in the neuromuscular diseases of ALS and Parkinson’s disease.  The miss on Parkinson’s is especially astounding.  Vasques projected 24 Parkinson’s Qualifying Diagnoses in the settlement’s entire 65-year term.  Instead, as we enter 2020, there have been 137 approved claims for Parkinson’s disease.  His numbers for dementia were probably fairly accurate.  He projected 1,301 awards for Levels 2 and 1.5 through the year 2020.  So far 1,874 have been submitted.  Had his projections proved correct there would be a 69.42% approval rate which is much more in line with approval rates for other diagnoses. 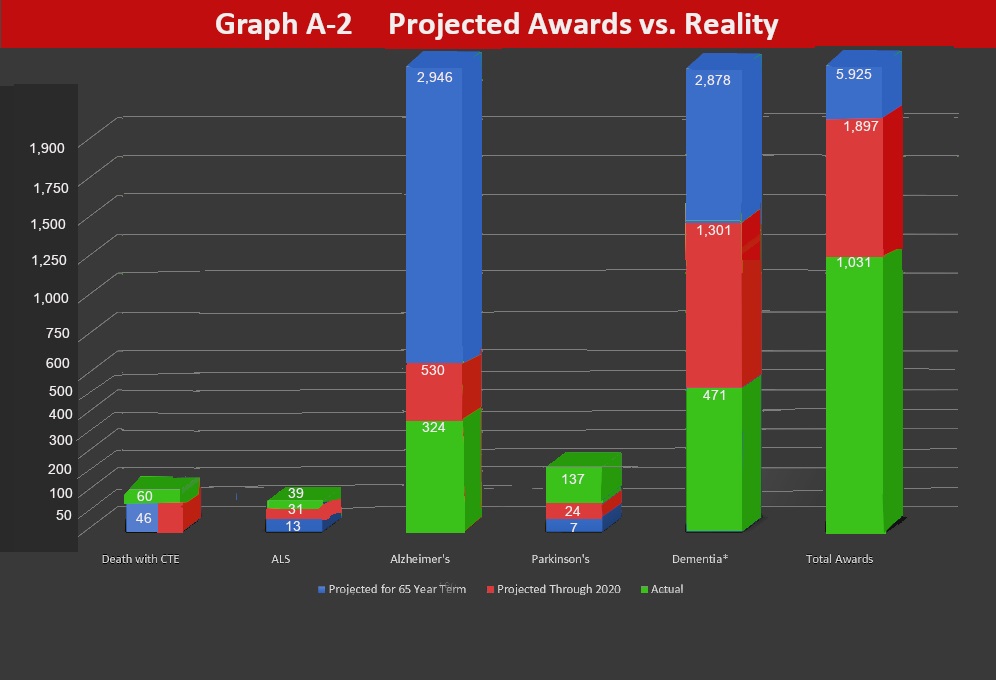 Note that green represents actual approved claims.  Then take a look at Death with CTE, ALS, and Parkinson’s.  The settlement grossly underestimated the prevalence of these high-dollar claims.  The prevalence of Parkinson’s disease in retired NFL players is an astounding miss.  The actuary estimated only 7 (red) awards for Parkinson’s disease at this juncture of the settlement and 24 (blue) for the entire 65-year term.  Instead, 137 Parkinson’s claims have been approved and 167 have been filed.  As noted earlier, Parkinson’s claims have an 82% approval rate which means more are coming.

Now take a look at Alzheimers and dementia.  The first thing you should notice is that green is at the bottom of the chart as opposed to the top as with the neuromuscular diseases and CTE, meaning fewer claims than projected have been approved.  For Alzheimer’s, the projection was 530, but only 324 claims have been approved–a difference of 206.   While 206 claims is a significant number, it pales in comparison to what you see for dementia.  1,301 dementia claims were projected to be approved by 2020.  Instead, only 471 have been approved–only 36% of projected approvals.  There are a number of reasons for this, and that players aren’t affected is NOT one of them.  1,874 dementia claims have been presented–more than enough to hit the projected approvals.  Instead several factors have placed the NFL at war with players suffering from dementia.

It’s highly probable that Vasquez’s miss on the actuary could be less of “he’s an idiot” and more of he was asked to justify and support the number the NFL had agreed to pay out in the settlement.  Both the Vasquez report commissioned by Class Counsel and the Segal Report commissioned by the NFL were in agreement money-wise at $675 million which Vasquez wrote was “sufficient to pay all the anticipated claims.” 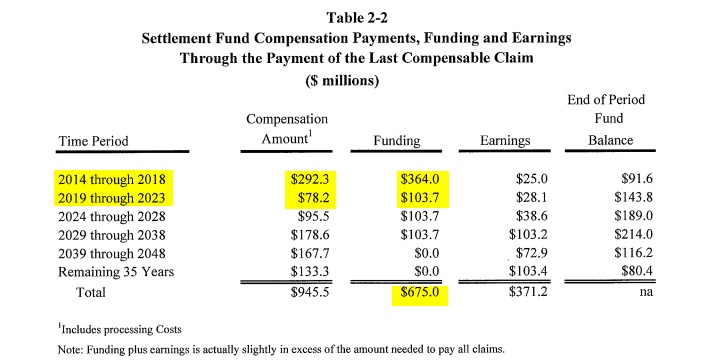 Note that he mostly projected Level 1.5 claims–the least severe qualifying diagnosis to occur when men were mostly in their 70s and 80s.  He didn’t anticipate or at least acknowledge the prevalence of dementia in players as young as their 30s, nor how common an occurrence it is for retired players in their 40s and 50s.  His findings for Level 2 were similar, with players slightly older than at Level 1.5  His math was a little odd in that he didn’t compute a total payout for Level 1.5 since he assumed that Level 1.5s would progress to Level 2 or Alzheimer’s, but he did compute totals for those conditions.

If Alzheimer’s and Level 2 awards were to be paid at the numbers projected using the current payouts, this would come to almost $1.2 billon for Alzheimer’s and just over $1.9 billion for Level 2 bringing compensation for just these two conditions to more than $3.1 billion.  Note the entire uncapped settlement was valued at approximately $1 billion and you see that it would take three times that amount to compensate Alzheimer’s and Level 2 alone.  Nevermind the underestimated calculations on CTE, ALS and Parkinson’s.  Most Death with CTE claims have already been processed and the payout is $93,248,944 vs the $69.4 million estimate; an overage of over $28.4 million.  This is likely one of the smallest errors in the Vasquez Report.

The total of ALS awards for the 65-year term according to Vasquez was estimated at $49.4 million.  In the first two years of the settlement $98,327,542 has been awarded for ALS, almost doubling the 65-year projection.  Incidence of ALS has been three times projections meaning that ALS payouts will probably come to around $294,9 million for the term of the settlement–nearly 6 times the projected amount. 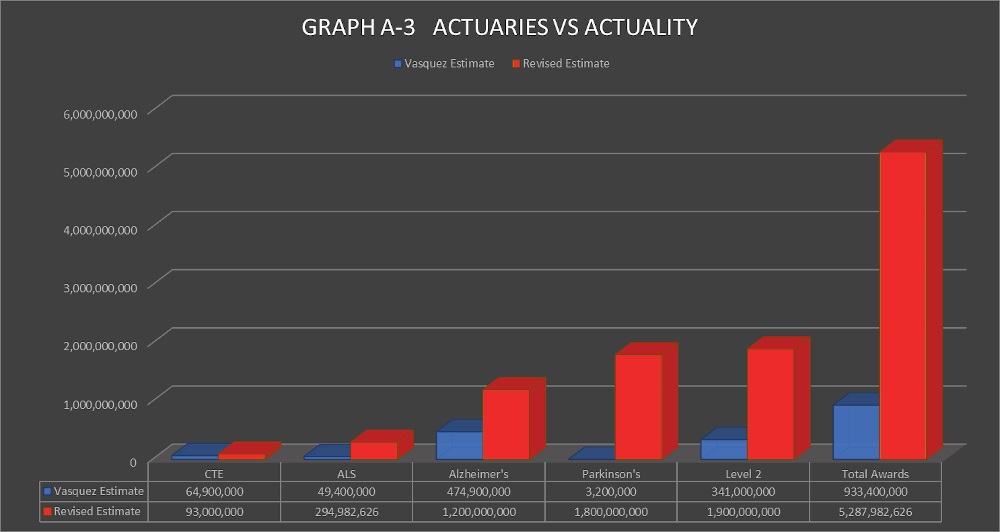 Combining all of these figures would indicate the settlement SHOULD pay out in excess of 5.2 billion.  Instead, it was estimated at just under $1 billion with the NFL expecting to pay $675 million with the remainder earned in interest.  It’s difficult to contest CTE pathology and also difficult to contest an ALS or Parkinson’s diagnosis.  That leaves Alzheimer’s and dementia for the NFL to try to cut their losses. Since Alzheimer’s isn’t diagnosed through the BAP and subject to BAP protocols, it’s harder to dispute than Levels 1.5 and 2 Neurocognitive impairment, or dementia, which are subjected to a very exacting legal standard as opposed to normal medical considerations.  This is why so few dementia claims have been approved and paid.

It’s also why audits and appeals are aggressively pursued and the NFL desperately seeks a fraud angle to justify cutting its losses.  Things may be rather quiet on the settlement front for the time being, but this issue isn’t going away any time soon.