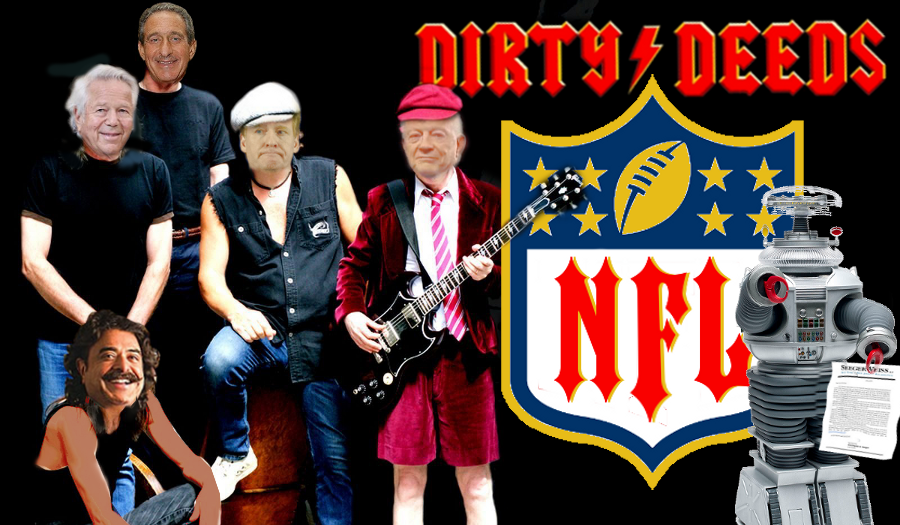 On July 2, the same day Judge Brody issued a final denial to the Gordon family’s thrice approved, and then denied settlement claim, Chris Seeger sent an emailed letter to the class of retired players.  In part one of this “dirty deeds” series, I wrote in detail about how a 37-year-old player suffering from dementia, whose claim had been approved, audited, approved again, scrutinized by the AAP, and approved yet again, was denied on the single medical record that disputed his impairment.  That record was presented by the NFL in their appeal, having been done by one of their Plan doctors in denying the player’s disability claim, and had never even been seen by Amon Gordon and his wife until it turned up when the NFL sought to deny them yet another promised benefit.

Unfortunately, the decision makers on up through Judge Brody gave that one non-diagnosis more weight than seven years’ worth of medical records, including those of a world-class neurologist who has been treating Mr. Gordon for four years.  In my previous article, I described Judge Brody’s cryptic ruling and with the help of Mrs. Gordon, filled in the missing pieces from the judicial order, and in doing so, discovered how it will basically nullify the generally consistent settlement provisions for any remaining pre-effective date claims.

Coincidentally, or not, Mr. Seeger’s letter was distributed the same day that Judge Brody’s order arrived on the docket.

In the letter, Seeger informs the Class that he is now the sole lead counsel representing players as a group, in the settlement.

As I wrote a few weeks ago, Judge Brody shocked observers when she released all other class counsel from their positions in advocating on behalf of the retired players.  The move seems retaliatory in that several Class Counsel, including Gene Locks, David Langfitt, Steven Marks, and Sol Weiss had challenged an order issued by Judge Brody implementing new rules governing MAF physicians who participate in the settlement program.  They pointed out numerous areas in which the new MAF rules will compromise the negotiated rights of players and unfairly tilt the balance of power even more in the direction of the NFL.  Seeger joined with the other attorneys, albeit in a subtler brief asking for only one change.

On May 7, a hearing convened in Judge Brody’s courtroom, in which Locks, Langfitt, and David Buchannan of Seeger Weiss argued on behalf of the players.  Brody did not acknowledge any concern for the players and seemed adversarial toward their counsel—especially Locks and Langfitt.  Shortly after the hearing Locks and Langfitt submitted proposed changes to the MAF rules that were in line with the negotiated balances, and just a few days later they were dismissed from their positions of authority.

Seeger writes, “We are now busy working out issues that arise to be sure you receive the benefits to which you are entitled under the terms of the Settlement Agreement.”  For reasons, I’ll bring out shortly, I’m guessing this is both truthful and an understatement.

Seeger then veers into the Settlement’s successes citing numbers for approved monetary awards and completed BAP appointments.  The next paragraph, however, is a departure from Seeger’s normal mode of communication and I feel it’s the most important paragraph in the letter—possibly the most important piece of information he’s presented to the class of retired players in the entire history of the settlement.

This “alert” is the reason I included the Lost in Space robot in my graphic (for those old enough to remember.)  The robot’s most famous line was, “Warning!  Danger Will Robinson!  Danger!” and that’s precisely how I’m reading the alert—it’s likely in response to an issue currently being raised by the NFL—and should the NFL secure a favorable ruling, exact irreparable harm on retired players with brain injuries who hope to collect an award.

In emphasized text, Seeger tells class members, “All the information you provide in your claim package must be absolutely complete and accurate.”  While my long-time readers know I’ve disagreed with Mr. Seeger on numerous issues, I am in complete agreement with him here.  Some examples he gives include employment history, driving, and daily activities, as well as complete medical records.

Take this as a Miranda warning, “Anything you say can and will be used against you.”  As I’ve reported for nearly two years, the NFL runs extensive background checks and does exhaustive internet searches of players who are in line for an award.  Last week a retired player told me that there’s a private investigator watching him, and likely documenting his every move.  As Seeger, more subtly stated, “you must assume the NFL is doing its own research…”

While I typically wait to report until I have supporting documents in hand, I’ve been informed of a particularly heinous attempt by the NFL to permanently disqualify players from participation in the settlement if they are found to have misrepresented any material fact.  While I certainly don’t have any verification, my gut tells me this was the primary reason for Seeger’s letter.

Likely because documents were leaked in the “generally consistent” and “AAP” NFL objections, I’ve been told that each firm involved in the current controversy received briefs redacted differently particular to each firm.  I’ve never heard of this being done before and can think of no reason for doing so now aside from an attempt to prevent leaks.  That said, I’m still working on it, and if anyone reading has access to the documents please contact me. Because of the sensitive nature of the situation, I will not publish, nor will I give any indication as to how they were obtained.

I don’t know the scope of what the NFL is seeking and I’m not certain, with the redactions that any single attorney even has access to that information, but numerous sources have informed me that the NFL is indeed seeking to permanently disqualify players if misrepresentations are found.  Whether or not this extends to a neuropsychologist report that indicates malingering, or if it is confined to functional activities, I’m uncertain, so the best course of action is to try to be as forthcoming and transparent as possible.

The NFL’s litigation with its insurers is rapidly approaching a point where the NFL will have to concede to discovery or settle if the insurers are willing, or if they are more afraid of discovery than monetary damage, walk away from the table, footing the entire bill for player awards.  As it stands the NFL hopes to collect from its many insurance polices that have been in effect through the years, and decades and insurers are saying, “No.  If you knew this was going to happen, then, we’re not liable.”  While the NFL has always been averse to compensating retired players, I feel the insurance litigation has ramped it up to a frightening new level, and it really doesn’t matter if a player is impaired, or even impaired within the letter of the definitions of the Settlement Agreement, if there is any detail the NFL can find and use to its advantage, you can rest assured they will use it.

It’s impossible to predict how the court might rule on this, since it’s something that certainly isn’t defined in the Settlement Agreement, but based on Judge Brody’s most recent rulings, she’s been giving the NFL almost every advantage they seek, concerned, perhaps that they will suffer financial damage due to the uncapped nature of the Agreement, and likely heightened concern because of the uncertainty regarding insurance coverage.

Personally, this doesn’t concern me in the least.  The league needs to learn a lesson, as many other corporate defendants do, when they run amok over those less powerful, expecting only the equivalent of a regulatory fine should the get caught that will allow them to keep on doing what they do, while barely missing a beat.

Since I’ve delivered a ton of not-so-good news, I’ll try to end on a more positive note.  Many players and their families felt letdown because the concussion case settled before any discovery took place.  That overdue discovery may soon become a reality.

Over the last few months, the NFL’s insurers, having grown tired of being evaded sent subpoenas to each of the thirty-two teams.  Here’s what they’re looking for:

Currently Justice Andrea Masley of the New York Supreme Court, who is presiding over the insurers’ cases, has stayed execution of all the state court subpoenas but should she grant a permanent injunction, she has said that she will require all teams to submit to her jurisdiction.  The current discovery schedule anticipates wrapping document production in a little over a year, so expect action to pick up in New York in the very near future.

In the meantime, retired players and their families, and friends who provide support affidavits should strive to present a clear and accurate representation of their circumstances, and while hyperbole seems to be part of human nature, avoid it when dealing with the NFL.

Please help us to continue bringing the stories that no one else is reporting by making a small contribution toward our operating costs. Court documents aren’t free, and you can be a difference maker by helping us to meet the expenses necessary to remain ad-free and provide the coverage you’ve come to expect over the past three years.

Permanent link to this article: https://advocacyforfairnessinsports.org/nfl-concussion-settlement/more-nfl-dirty-deeds-alluded-to-in-chris-seegers-letter-to-players/