NFL Admits “Controversy Exists” with Insurers in Regard to Concussion Settlement 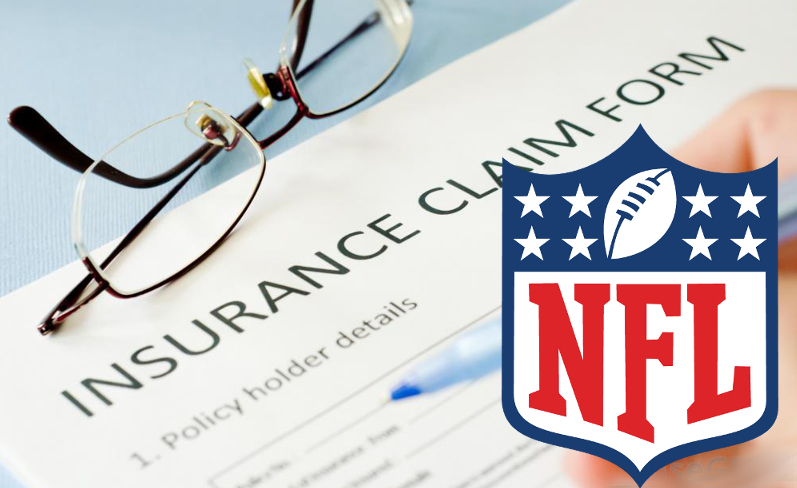 The NFL has been engaged in an ongoing dispute with its insurers in regard to concussions and who is responsible to pay for the damages.  Travelers Insurance, which is the second-largest U.S. writer of commercial property and casualty insurance, filed suit against the NFL in August 2012, disputing its responsibility for coverage of claims from former players in regard to the concussion injuries because of the NFL’s alleged mishandling of the same.  In their initial complaint, Travelers said that the NFL was insured between 1984 and 1997 for general liability coverage and excess liability coverage from 1991 – 2002, and is not a current insured. 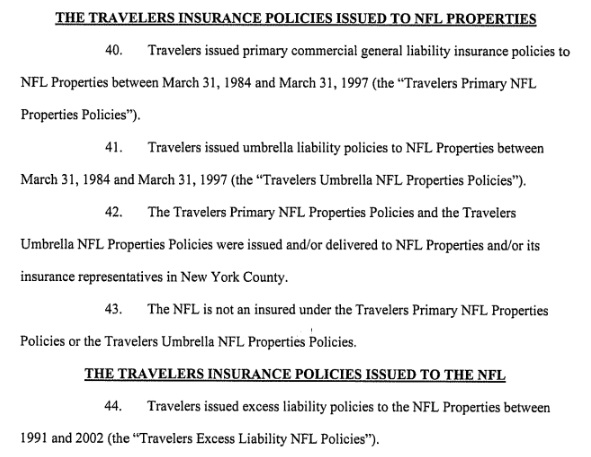 The NFL, however, filed claims against its various insurers, with whom it held policies prior to 2012 as a result of numerous concussion injury lawsuits brought by former players.  These were consolidated into a multi-district (MDL) suit in the Eastern District of Pennsylvania.  The MDL complaint stated that the “NFL knew, or should have known that the repeated traumatic head impacts the plaintiffs [players] sustained while playing NFL football were likely to expose them to excess risk to neurodegenerative disorders.”  It alleged that the NFL failed in its responsibility to advise players of “heightened risk,” and that it “willfully and intentionally concealed from and misled the plaintiffs concerning that risk,” thereby recklessly endangering them.

The MDL referred to, of course, is the massive Concussion Settlement that was finalized in January.  During the time this class action was litigated, Travelers and other insurance lawsuits with the NFL were placed on hold awaiting the outcome of the legal proceedings.  Since the NFL finally settled, agreeing to an un-capped monetary pay-out over a 65-year term, without undergoing discovery or admitting liability, its insurers now want to know the same thing the players asked.  What exactly did the NFL know in regard to concussions?  This knowledge should play heavily in whether or not the insurance companies are on the hook for the approved settlement as well as over 150 opt-out lawsuits that have now resumed.

As suits and countersuits between the NFL and its insurers inch closer to discovery, both sides maintain a number of affirmative defenses which will likely be addressed before meaningful disclosures are made.  On January 26, after the Concussion Class Action became final, Travelers submitted an answer to the NFL’s countersuit stating the following: 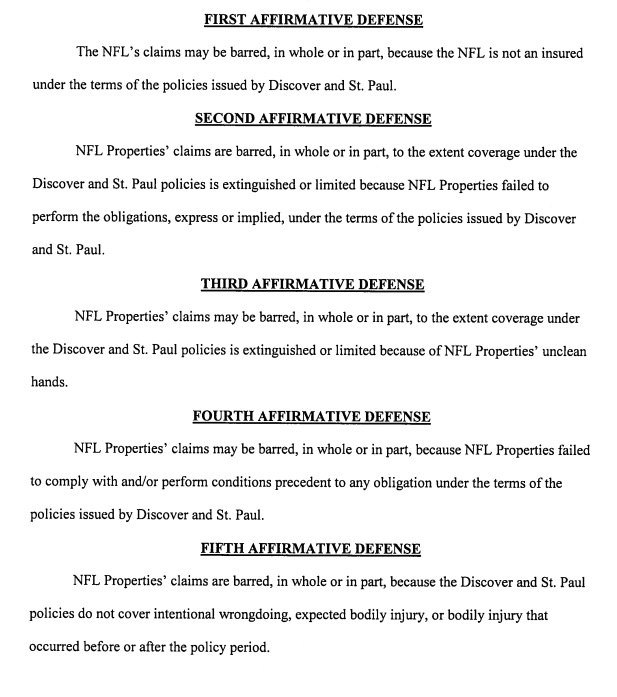 Additionally, in a total of twenty-two affirmative defenses, Travelers (Discover and St. Paul) assert that they are not liable because their policies do not cover bodily injury that was known to the NFL prior to the policy periods, and that the NFL had prior knowledge of the bodily injury at issue.  They also state that the defense costs incurred by the NFL “were not reasonable and/or necessary,” and that the NFL’s claims may be barred by “not cooperating” in regard to providing information “with respect to the underlying claims.”  In regard to the concussion settlement agreed to by the NFL, Travelers states that this agreement was made without their consent.  Travelers further states that should the NFL prevail it would result in “unjust enrichment.”  The NFL, Travelers claims, “has failed to mitigate its damages and therefore is barred from any recovery.”

With concussion settlement now final, NFL has filed an amended lawsuit against its liability insurers to assert new indemnity claims.

In addition to the Concussion Settlement awards, the NFL seeks reimbursement of over $30 million in legal fees to Paul Weiss (of Deflategate fame) and others, which they claim to have spent in defense cost.

In regard to the insurers’ assertion that they did not consent to the MDL class action settlement, the NFL responded with claims that their action (or perhaps inaction) was unjustifiable and “in bad faith.”

The NFL pleads a “breach of contract” on the part of their insurers and as a result, they have “suffered damages in attorneys’ fees, costs, and expenses incurred to defend against those claims.”  They ascertain, among other things, that their insurers are responsible for payment of “bodily or personal injury caused by occurrences or accidents.”  The NFL has thus far avoided addressing any liability issues for these injuries based on their knowledge of concussions and sub-concussive head trauma, and therefore any potential role in or responsibility for the injuries that players incurred.  The insurers consider this to be an important factor regarding whether or not there is an obligation on their part to cover the NFL’s losses.

On February 23, the insurers filed a letter (displayed below) with the court stating their objection to the “bad faith claim” pled against their refusal to .consent to the concussion settlement.  The insurers call the statement “meritless” and say that “frivolous is an understatement” in regard to the claim.  They further assert, “”The NFL Parties have engaged in a four-year strategy of seeking to prevent or delay any meaningful discovery from going forward in the coverage litigation and refused to provide basic information necessary for the Insurers to evaluate the purported reasonableness of the Class Settlement,”  and have asked the NFL to withdraw this Count from the amended pleading if they wish to proceed without further motion practice.

My thoughts in regard to the NFL’s response lean toward believing that they would like to continue “motion practice” as long as possible in order to continue to delay discovery, however, Justice Oing appears to be approaching his threshold for this tactic.

Though it is a common legal phrase, I find it somewhat amusing that the NFL, in its proposed amended complaint has been forced to admit one truth; that a “controversy” does in fact exist.

“Has the NFL finally met its match?”  As corporate giants, the NFL and insurance industry appears to be rather evenly matched.  In the litigation war of attrition, the Insurers have the resources to endure.  As I stated in regard to a related insurers’ lawsuit,    It appears that at some point in the litigation, the NFL will be forced to undergo extensive discovery or eventually reach some type of settlement or agreement in order to avoid it.  A party that I spoke with who was involved in the Concussion Settlement litigation said he felt this legal battle might well be the “NFL’s undoing.”  While I’ll abstain from speculation regarding the eventual outcome, I will venture to make this prediction: NFL vs. insurers will in all likelihood be the sports law dog fight of 2017.