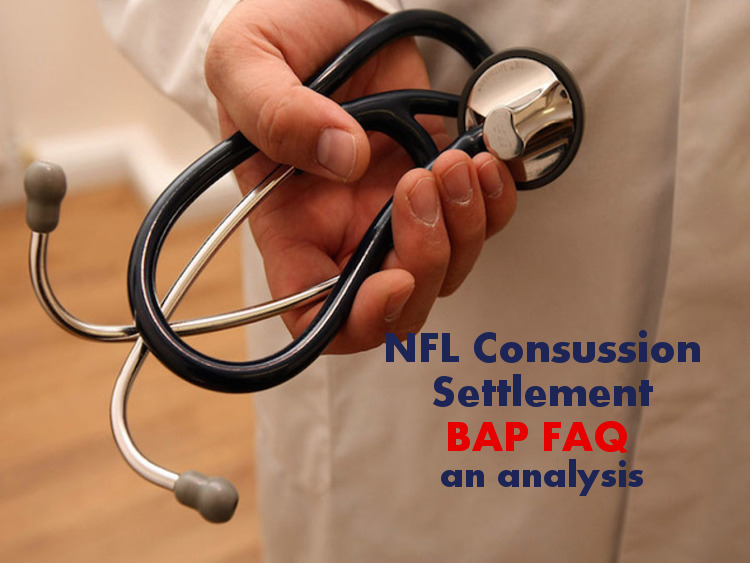 Update: June 29. 2019.  Most of these FAQs that I wrote four voluminous articles about have been replaced.  How can they reflect the settlement and be known as the “rules of the road” when the speed limit changes at whim?

In the first installment of this series I looked a NFL Concussion Settlement FAQs 1 – 23 which deal with general provisions and personnel of the Settlement.  More importantly perhaps, I question the ability of and ethical implications of requiring a brain-damaged class to navigate, at minimum, a 69-page document in order to file a claim for a monetary award, especially without the aid of independent counsel, as was encouraged by Lead Class lawyer Christopher Seeger and the NFL.  If you haven’t read Part 1 of the series, I recommend reading that first and then coming back to take a look at a short summary of FAQs concerning the Baseline Assessment Program.

FAQs 25 – 51 deal with the Baseline Assessment Program (BAP).  Some of the FAQs are very straightforward like the basic description above, but others, like the majority of general information FAQs highlighted in Part 1,  others merit additional answers or raise unique questions of their own. 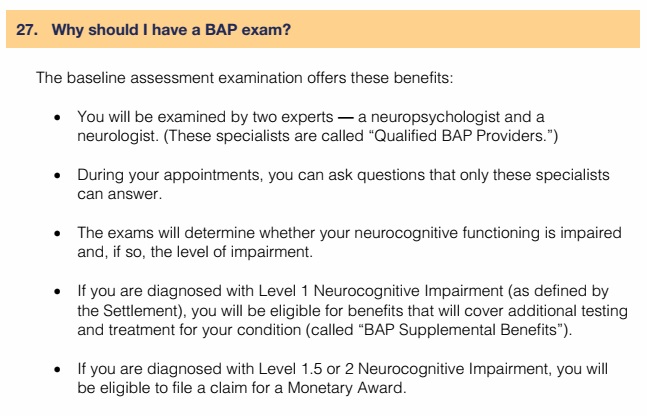 What’s included in supplemental benefits?  Does a player have to continue to receive treatment from the BAP provider in order to receive the benefits, or can they be administered through a personal physician?  What if the BAP provider isn’t local to a player – is any transportation assistance provided?  I can provide the answer to that one – it isn’t – but this is a frequently asked question and should be included in Settlement FAQs.

If a player who did not receive a qualifying diagnosis when he had his BAP examination receives one later from a personal doctor, how is this resolved?

Exhibit A-2, beginning on page 111 describes in great detail the tests a neuropsychologist must perform in order for a retired player to receive a post settlement effective date diagnosis.  Pre-settlement diagnoses also appear to be bound by this as well.  No mention is made of the test to be performed by the neurologist.  What do these encompass?  Will tests such as MRIs and PET scans be included with the exam?  If not will their results be accepted as medical evidence if performed independently?

While BAP Providers do not report to the NFL, they do have the right to challenge results.  It would be instructive to know who developed the battery described on pages 1 through 9 of “Exhibit B” of the Settlement Agreement (pages 111 – 119 of the PDF document) and what affiliations with the NFL they may have had.  A list of ALL personnel who contributed to creation of the battery should be made publicly available.

Retirees who have called to schedule a BAP exam are reporting waits of up to 9 months in some areas.  If a player calls for an examination and cannot be accommodated within the correct time frame based on his age, will he be allowed to proceed with the exam and if diagnosed with any covered injury remain eligible to receive BAP benefits or apply for a Monetary Award?  Is there an established time frame prior to one’s 45th birthday to schedule an exam, or how much in advance of June 6, 2019 must a player born prior to January 7, 1974 call to schedule?

Is there a certain minimum notice retired players should be aware of? Courtesy dictates a much notice as possible both for the benefit of the doctor(s) and any retired players who might be able to assume the slot, but is the latest time an appointment can be canceled without penalty?

Since a retired player incurs a penalty for a “no show” or may be responsible for a late cancellation fee, “timely manner” should be defined.

Do BAP providers work in tandem?  In other words are local neuropsychologists and neurologists paired with one another?  If so, if a player elects to have one part of the exam done locally and the other portion done in another region, would the two still coordinate on diagnosis or would there be any negative impact from using providers in two geographic areas?

According to the Settlement website, as of December 27, 2017, 4,021 BAP appointments have been scheduled and 1,557 exams have been performed.  No additional information such as how many exams resulted in a qualifying diagnosis is posted in regard to the program. 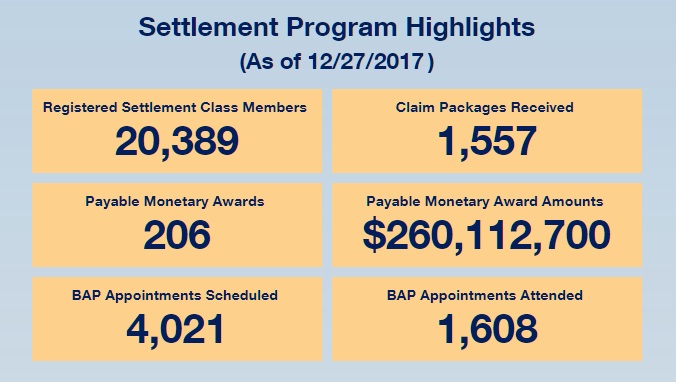 It does appear that the most basic information is being updated weekly.  As I reported last week 1,913 claims had been submitted as of December 11 and of these 1,520 were for monetary awards with representative and derivative claims composing the balance.  The December 27 number apparently reflects regular monetary awards claims, showing an increase of 37.  The good news that can be derived from the chart above is that approved claims have increased from 191 to 206, or an additional 15 approved claims over the past two weeks.  While that is a small number and reflects a mere 13% approval rate, it is a slight improvement over the 10% at which the approval rate has been stuck for some time.  Hopefully this trend will continue.  The gross (pre-lien and offset) payout reported this week is $260,112,700 – an increase of $19,425,133 over the previous figure, with the 13 new approved claims grossing an average of $1,494,241, which is slightly lower than the previous average of $1,512,554.

Despite the apparent upward tick which does give reason for cautious optimism, a number of problems and challenges remain to addressed.  In Part 3 of this series I’ll be analyzing the FAQs that deal with the Monetary Awards claim process and how as before the answers yield more questions.