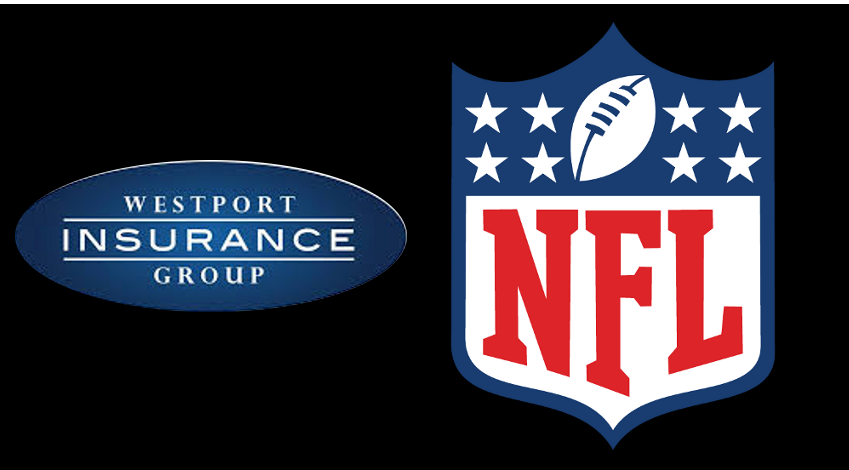 According to Ken Belson at New York Times and other sources,  Westport was the only insurer that actually settled with the NFL, while others are still pursuing the elusive discovery.  Per Belson:

“The case was originally brought by 32 insurers who wrote liability policies for the N.F.L. dating back to the 1960s. But their case was largely shelved while the N.F.L. and the retired players negotiated their settlement.”

The insurers banded together for the purposes of their suit, but they had different amounts of exposure. Some insurers were the primary parties covering damages, while others wrote so-called excess liability policies that covered damages over a certain amount. Some insurers wrote policies for only a year or two, while others worked with the N.F.L. for many years. Some of the insurers took over the claims from other companies in mergers and acquisitions. A half dozen insurers settled with the N.F.L. in 2017, leaving 26 companies, including Allstate and Travelers, to continue fighting. Most of their cases remain active, though those companies had to sign off on the Westport settlement. “

The confusion regarding the number of insurers to settle  stemmed from this paragraph in the stipulation:

Exhibit A referenced previously in the stipulation lists 23 insurers including Westport and the signatories to the stipulation are composed of counsel representing the 23 insurers plus NFL counsel.  So Westport is now out of the game, but for the others the quest for discovery will continue.

Hopefully, this is an indication that she’ll force discovery after all.

(Personal note: I woke up about 2:30 this morning with every intention of going back to bed after checking the computer to see what I may have missed. I decided to check the insurers’ docket on a wild hair and saw that a settlement had dropped.  Knowing that I had oral surgery scheduled for later in the morning I reported, without taking the usual time to vet.  My apologies to any and all for the confusion.)

In a less than climatic ending to litigation that many felt would finally expose the NFL in regard to its knowledge of brain injury, on September 11, the NFL settled with the insurers who sought that information.

In June, the case came to a halt as Justice Andrea Masley heard arguments to quash subpoenas sent to each NFL team seeking the NFL organization sought to zealously guard.

The 32 subpoenas, identical except for team name to this one sent to the Buffalo Bills in March, sought to gather the information the NFL refused to provide. 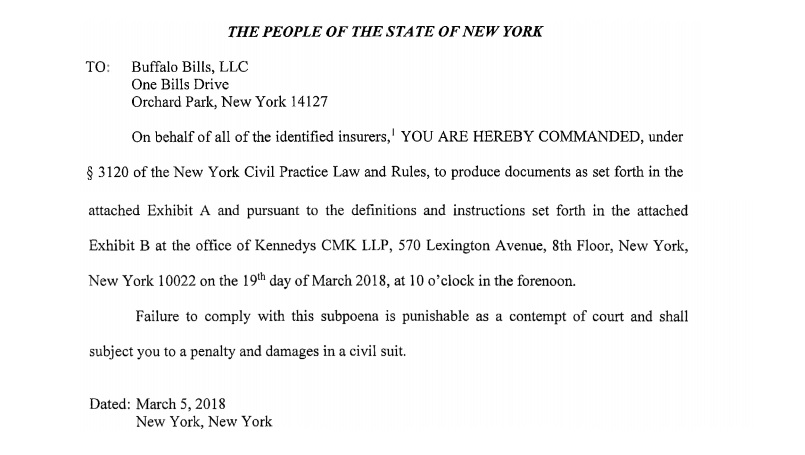 Exhibit A, referenced in the subpoena contains 5 pages of interrogatories similar to these. 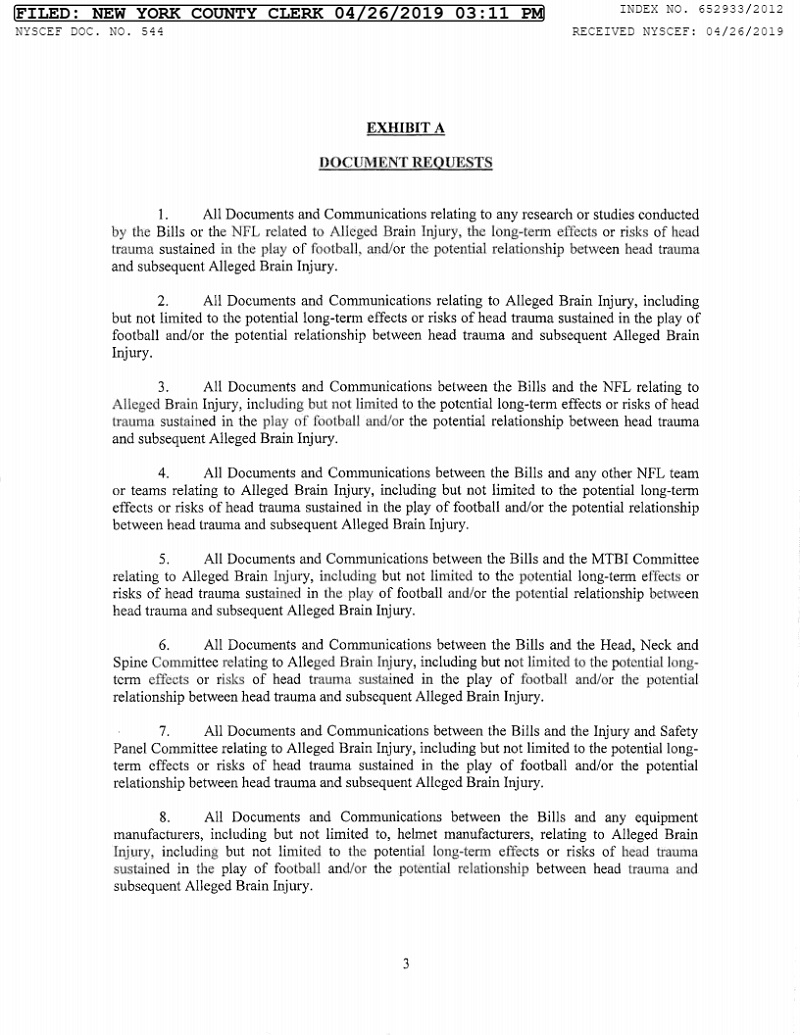 The subpoena sought information on Workers Comp and Disability claims and correspondence about “Concussion” and “League of Denial” among many other topics that would reveal the NFL’s discussion with its teams about football-related brain injury.  You can read the full list of document requests here:

Since the subpoenas were issued in March, the teams and NFL filed motion after motion seeking to kill the subpoenas but it appeared that in order for Justice Masley to grant that request the teams would have to agree to her jurisdiction as indicated in a June hearing.

It appears that settlement talks followed shortly afterward as docket activity ceased until the stipulation dropped on 9-11.  Perhaps one of the post-settlement cases against the NFL will be successful, but since the NFL has shown an inclination to settle rather than submit to discovery of this nature, it’s fair to wonder if anyone will ever be able to pry open the Pandora’s box the NFL seems determined to keep sealed.

Permanent link to this article: https://advocacyforfairnessinsports.org/nfl-concussion-settlement/nfl-settles-with-insurers-dodges-discovery-bullet-again/