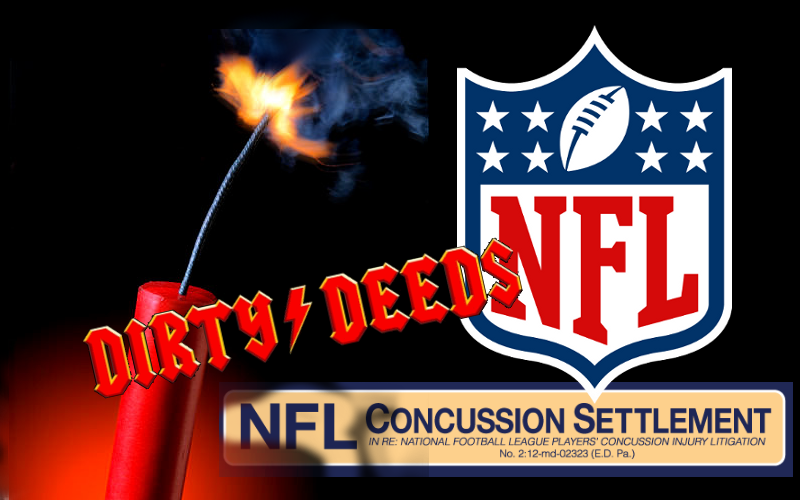 The NFL has been long-known for manipulation of science and use of intimidation tactics but never has this been more evident than in a motion filed on March 20, in the Concussion Settlement.

Allegations of bully tactics, doctor manipulation, and cherry-picked science are revealed in the motion filed by Locks Law Firm in an attempt to put the settlement back on the track it was purposed for – that of compensating injured retired players and their families who are suffering devastating effects of brain damage as a result of their football careers.

“They’re getting denied because of the symptoms of their disease. They’re essentially using our data against us,” said one doctor who is treating players in an interview with the Washington Post,  “It’s infuriating. It makes your blood boil.”

“The Settlement Agreement is in danger of failing its execution,” the motion begins, “As advertised, it was supposed to be a method to distribute tangible benefits to diagnosed players, a safety net against brain injury and its destructive effects on Class Members and their families.  Sadly, the Settlement is failing to provide a fraction of what the NFL promised.”

The motion asserts that the “NFL is trying to rig the claims system” and engaging in the “scorched earth tactics” that it is well known for.  The result to players and their families is devastating.

The brief describes a case, the progression of which appears to be typical in the Settlement.  A 41-year-old player had a decade-long history of neurological decline which included numerous neurological tests that revealed amyloid plaques – a marker for Alzheimer’s disease.  His medical records also included neuropsychological tests including one by a neuropsychologist employed by the New York Giants; all of these tests indicated neurological impairment.  His claim was approved and on the last day the NFL could appeal, they did.  When the player won the appeal, the NFL placed his claim in audit to avoid payment and seek another means of discrediting the claim.

While the claim was in audit the NFL scoured the internet and social media to find evidence to discredit the claim and found a 3-minute video of the player speaking to a youth group four years prior.  Though President Reagan led the country after having been diagnosed with Alzheimer’s disease in his second term (no doubt assisted by his wife and aides) and basketball coaching legend Pat Summit coached for a time after a diagnosis of early-onset dementia, the NFL staunchly refuses to admit that a player is impaired if he shows any functionality at all.  Instead, The NFL accused the MAF physician, multiple neurologists, the PET scanning service, the radiologist, the player, and his family of fraud.  The claim continues to remain in audit. An excerpt from the player’s attorney’s correspondence with BrownGreer documents the frustration: 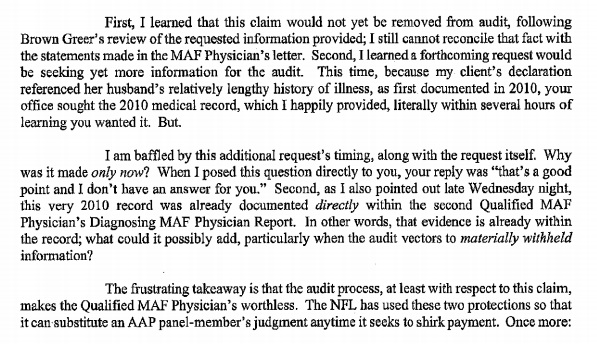 Exhibits filed with the motion show correspondence between the player’s attorney and the Claims Administrator that completely support the allegations.

According to the brief, the NFL has gone so far as to demand a differing diagnosis from appeals panel doctors than the one rendered by physicians who physically examined the player. 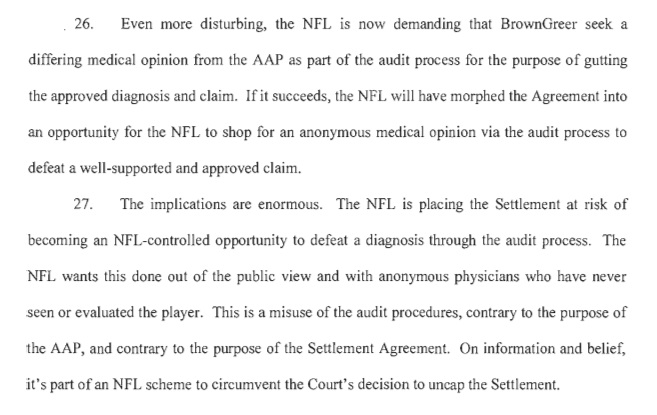 The case which was brought to court in which NFL players accused the League of defrauding them has through the NFL’s devious schemes been turned completely upside down in that the NFL is discrediting legitimate medical records and once again (as they have done in the disability process) accusing the injured players of attempting to defraud them.

Exhibits to the motion indicate that manuals have been prepared to instruct BAP and MAF physicians how to diagnose according to Settlement standards and for AAP (appeals panel) doctors, instructions to evaluate claims under the narrowest definitions possible.  Even more troubling is the fact that attorneys have no access to the manual – even the members of Class Counsel – Sol Weiss (Anapol Weiss), Gene Locks (Locks Law Firm) and Steven Marks (Podhurst Orseck) – in other words, lawyers who are not named “Seeger.”  This excerpt from an email from Gene Locks to Chris Seeger defines the problem: 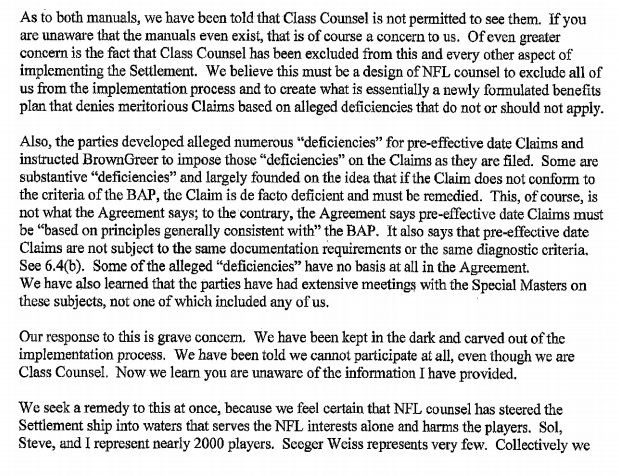 This email implies that Seeger is either denying the existence of the manuals or has no access to them either, to which Mr. Locks expresses “concern.”

All in all, the motion with exhibits comprise 82-pages of evidence of manipulation and deceit on the part of the NFL, and while not formally accused of wrong doing, Seeger’s complicity must be questioned regarding his inability or unwillingness to halt or at least openly fight what the NFL has done to corrupt the Settlement.

It is evident that other attorneys have gone to Locks (and probably other class counsel) when they have been unable to get problems addressed, only to learn that class counsel not named Seeger have no more access to the ever-changing processes than they do.  Some attorneys have filed motions as an attempt to address the problems and have met with joint opposition on the part of Mr. Seeger and the NFL, with Judge Brody ruling in favor of the latter for reasons that are unknown and difficult to comprehend.

In response to a Washington Post query, the NFL has denied all the allegations set forth in the motion, however this should come as no surprise to anyone familiar with their modus operandi.  It has been established time and again that the NFL has engaged in big tobacco style deceptive research, and one need look no further than their attacks on Dr. Bennet Omalu when he discovered the football/CTE link, to see how far they will go in attempt to discredit and humiliate doctors.

According to an anonymous source, one doctor of immaculate credentials from a major teaching university left the BAP program after being pressured to avoid giving 2.0 neurocognitive impairment diagnoses if any diagnosis at all.  He felt he was being pressured to alter test results and being impeded from being able to practice medicine in an ethical manner.  This narrative is very consistent with the information included in the motion.

Because of the numerous problems and corruption of the Settlement program, Locks Law, in the motion has pled for administrative control of the Settlement in order to return it to its purpose of compensating impaired retired NFL players.  I expect that Seeger will oppose the motion although he is now involved in at least two additional MDL proceedings – an opioid lawsuit and the Proton Pump litigation to which he has been appointed as Co-Lead Class Counsel once again.  Since Judge Brody has not ruled against Chris Seeger since the Settlement became final, it will be interesting to see if she breaks with the status quo and rules favorably, or inexplicitly rules in favor of Seeger once again.  Much hangs in the balance.