Reading Between the Lines of the Special Masters’ Status Report 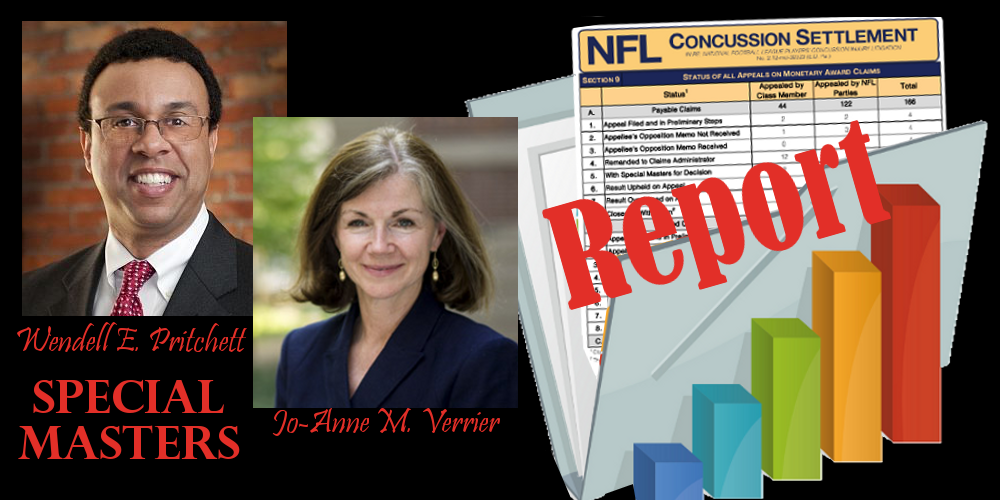 The Special Masters report was the third to drop and the shortest of the reports but gave a lot to unpack, so I’ll begin there.

This would be great news if the 3,192 cases with no diagnosis truly represented players who suffer no impairment.  Instead, this number reflects the difficulty of obtaining a diagnosis under the settlement’s stringent BAP protocols, leaving many impaired men at a loss as to why their conditions are not compensable.

Because this is such an area of vital importance, please bear with me as I wander in the weeds a bit to explore the reasons behind this very stark statistic.

Common reasons why BAP diagnostics fail to provide meaningful diagnoses to players stem from primarily 3 areas and two of the three are directly rooted in the BAP’s mandatory neuropsychological testing, while the third is indirectly related.

This excerpt from the settlement agreement as it pertains to all cognitive deficiencies is one of the most common reasons that players fail to receive a compensable diagnosis.

While you don’t have to prove NFL football caused the problem, many players are left trying to prove other things are not responsible for their impairment.

I haven’t been able to pinpoint it precisely but there seems to be something of a divide between neurology and neuropsychology regarding the factors underlying cognitive impairment.  In many instances, neurologist will attribute symptoms of dementia to brain injury and football play when it’s a factor whereas many (not all) neuropsychologist prefer to attribute the problem to things like headaches, prescriptions a player may be taking (even those used to treat cognitive problems), past substance abuse, depression, psychosis, or anxiety, and sometimes even sleep apnea.

While T-scores can be helpful indicators, they’re not infallible and some in neurology and neuropsychology find them particularly unreliable when testing persons of very low or very high pre-morbid intelligence. Click here and here for a couple of representative studies supporting this belief. This issue is at the heart of Amon Gordon’s appeal.  His testing is below average in a few areas and average in others, but because he had a pre-morbid IQ in the superior range the NFL disputes his impairment.

Take a look at the chart below comparing two cognitive domains (other domains evaluate similarly). 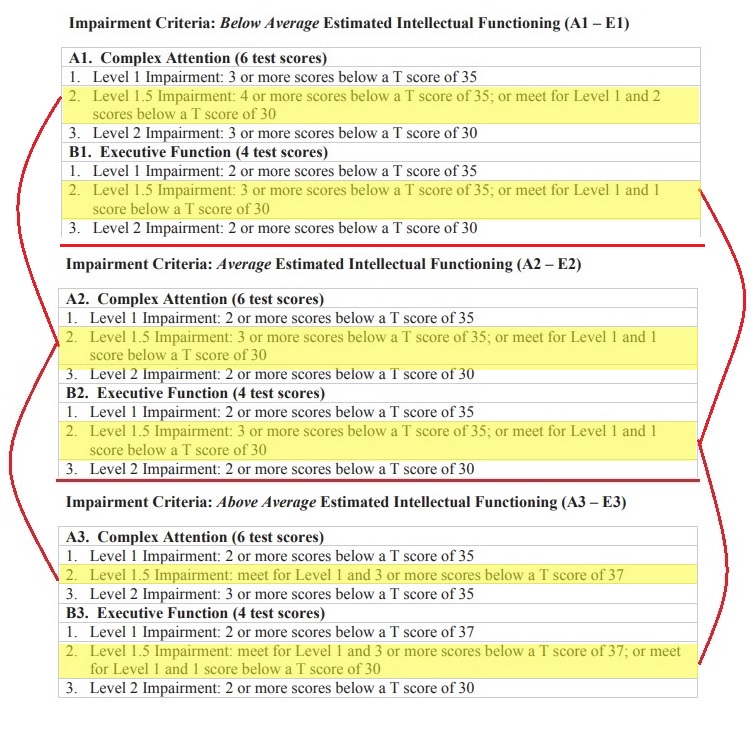 Note that 40 – 60 would generally be considered a typical score for an unimpaired person of average intelligence with 50 as the median indicator.  A lower premorbid IQ individual would have to have 4 or more scores under 35 in order to receive a diagnosis of Level 1.5 Neurocognitive Impairment, and since his expected premorbid score would be 40 or below, a score of 35 doesn’t constitute a significant drop while it does indicate severe impairment.

An average person would drop considerably (15 points) in most instances, using 50 as typical and the player would have to drop in three rather than 4 domains as would be the case for the person of below-average intelligence. A chart on the settlement website explains T-scores in a summary fashion and indicates that T-scores above 70 represent unusually high or below 30 represent unusually low performance, which brings us to the above-average requirements which on the chart indicated 3 or more domains below 37.

An average person would only have to drop about 15 points to have recognized impairment whereas a person of superior intelligence who would score around 70 premorbid, would have to drop more than twice that or over 30 points to receive recognition for their impairment.  Generally consistent would demand an accounting for a person of superior intelligence dropping down to average.

“The comparison to the median may show the performance is “normal” but it’s not normal for the patient, so they are left with a diagnosis of “normal” (regardless of diagnosed physical injuries), no treatment, a brain that is struggling to remap itself, and a life upside-down because the new normal is so different. It is a struggle that is being ignored. Patients are suffering and falling through the cracks, and I’m trying to understand the process of evaluation because it makes no sense.”

This was one of many comments I found on a message board where persons of superior intelligence were found “normal” even though the loss in cognition is far from normal to those suffering.  Imagine an engineer who could no longer do math.  A surgeon unable to operate. A computer programmer who could no longer create or understand code. A stockbroker no longer able to process rapid market fluctuations?

The NFL has some strange ideas as to how people with dementia and Alzheimer’s are supposed to function.  It’s as if they expect a dramatic drop in abilities than a steady decline.  They expect the starkness of a broken bone when a broken brain reacts quite differently.  While studies estimate one-third of Alzheimer’s patients drive, the NFL looks with skepticism if a player diagnosed with dementia drives.  One wife indicated to me that her husband drives and noted that he’s been in several fender benders over the last few years.  She worries and feels he shouldn’t but doesn’t want to rob him of the diminishing independence he has.  The NFL apparently does.  The NFL even looks at a player’s investments as if holding some form of wealth should be a red flag. Never mind appearing to function in a social setting.

Back to the Special Masters

The Special Masters give a two-paragraph nod to audits acknowledging that they review determinations of the Claims Administrator but providing no elaboration.  The Special Masters also reference coordination with the Special [Fraud] Investigator, providing an update on current investigations.

Hopefully, she will draw on her background as a criminal defense attorney and use it to curtail abuses that she would fight regarding her own clients instead of tightening loopholes, but her appointment is still too new to draw any conclusions.

The Special Masters are considering briefs from the survivors of players who died prior to January 1, 2006, and anticipate that all briefs will be received by late November.  This would seem to indicate a ruling (or rulings) beginning in 2020, possibly sometime in the first quarter.

The Special Masters noted their responsibility for reviewing the trustee for the attorney fee fund and stated that the court-appointed Pro Se Liaison who is assisting unrepresented class members with claims subject to the statute of limitations questions is compensated through this fund.

The Education Fund as established in the settlement agreement is in the process of implementation.  The Special Masters note working with Class Counsel and NFL Counsel to establish “programs promoting safety and injury prevention with respect to football players.”

Ordinarily, I’d borrow a phrase from Tom Brady and say, “Let’s go!” but the surveillance the NFL has kept retirees under in order to try to invalidate their claims gives me cause for concern.  Is this a set-up?  They call it entrapment when it relates to law enforcement.  I’m aware of teams and/or NFL inviting retired players to games and then photographing them and attempting (sometimes successfully) to invalidate their diagnoses and see their claims denied.  I truly hope this won’t be the case here, but until things become clearer, If I were married to a retired player who is experiencing cognitive issues, I’ urge avoiding any NFL affiliated events.

The Claims Administrator and BAP Administrator also submitted status reports.  I’ll try to get a commentary out on those when time permits, but in the meantime, you can access both reports below.

Permanent link to this article: https://advocacyforfairnessinsports.org/nfl-concussion-settlement/reading-between-the-lines-of-the-special-masters-status-report/