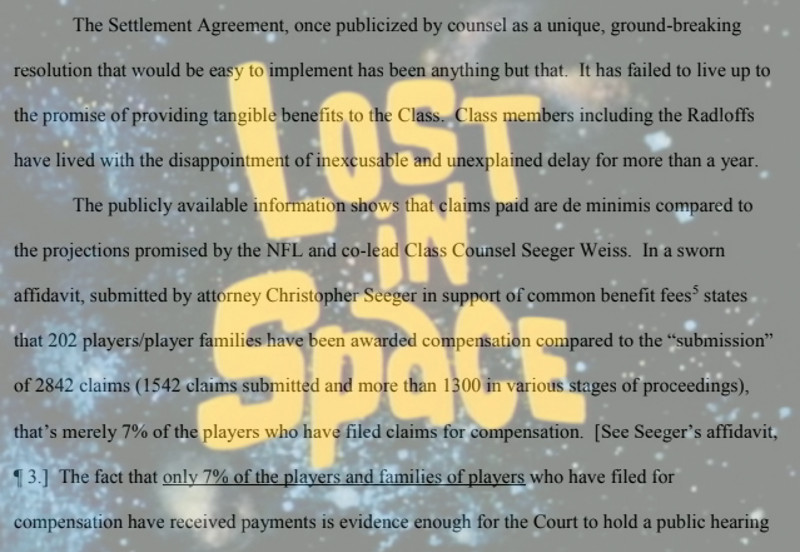 “Lost in space.”  That’s where many, if not a majority of NFL Concussion Settlement Claims seem to have ended up.  A motion filed on March 19, 2018 on behalf of former Falcon’s center Wayne Radloff shows in detail the excruciating wait retired players must endure to have their claims even considered in the NFL Concussion Settlement.  In a departure from his counterpart Chris Seeger, Co-Lead Class Counsel Sol Weiss has, in the motion, requested a public hearing to address “the seemingly insurmountable hurdles facing injured class members.”

It’s a highly unusual development when class counsel in a class action settlement or multi-district litigation openly oppose each other – especially after a settlement has been reached, but the diabolical implementation of the NFL’s much-heralded concussion settlement has forced just that.  As Larry Coben, an attorney with Co-Lead Counsel Sol Weiss states in the motion, “claims involving Dementia and Alzheimer’s Disease have been unreasonably and inexcusably delayed, from the instance the Claims Administrator began accepting applications for compensation. “ While he stops just short of assigning blame to his counterpart Christopher Seeger, there is little room for doubt as he details the Claims Administrator’s refusal to address claims delays under the supervision of Mr. Seeger.

The motion details the plight of Wayne Radloff, who in the delays has lost his home as his mind becomes more and more clouded and his wife, Garland strives to pick up the pieces of the mounting medical bills and constant care her husband requires.

Wayne Radloff was part of one of the initial lawsuits against the NFL and his settlement claim was among the first filed.  His attorney states the claim was filed on February 14, 2017 – over one year ago.  He retired from the NFL at the end of the 1991 season and began seeing a doctor for cognitive issues in 2003, when he was only 42 years old. 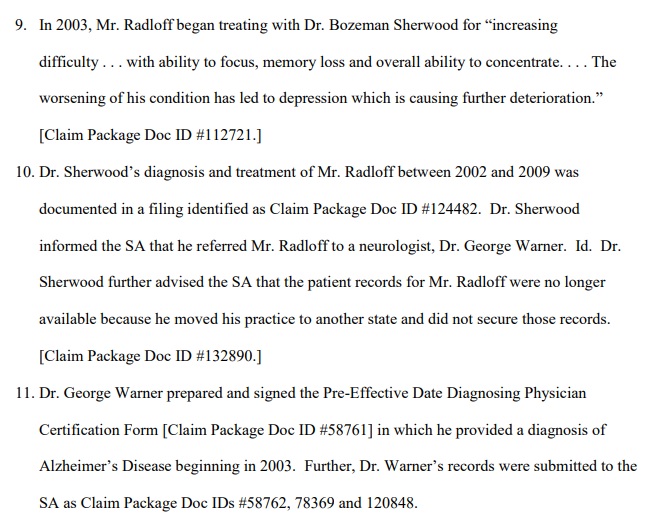 The motion contains excerpts from Radloff’s medical records showing a definitive diagnosis of Alzheimer’s disease.  When the settlement was pitched to players before, and especially during the registration period, Chris Seeger and Orran Brown repeatedly emphasized that players with existing diagnoses, such as Wayne Radloff would submit a claim along with their medical records and should receive a check within weeks.  Instead of living up to their promises, players like Radloff are still waiting – some more than a year later.

Radloff’s attorney details the specific timeline for this claim:

Between June and November 2017 the Claims Administrator ignored the Radloffs’ filings. 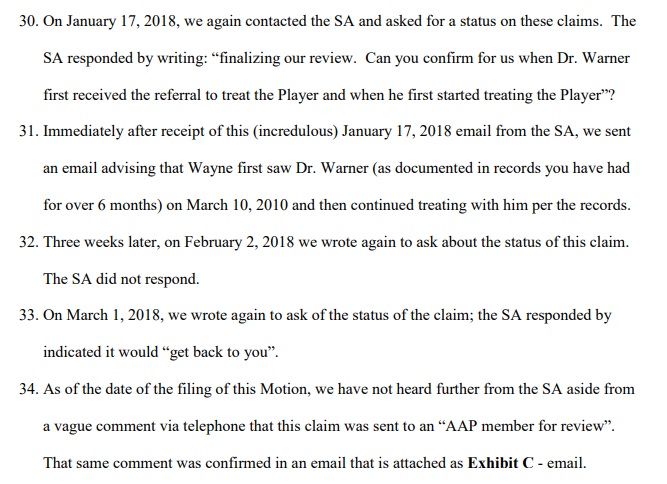 Claims Administrator Orran Brown, who claimed that he “just wanted to help” and stated as he pitched the settlement that claims would be processed “right” and “quickly” never responded to Mrs. Radloff’s impassioned plea:

And so the Radloffs’ continue to wait and to pray for relief, knowing no more than they did when they filed their claim over a year ago.

Sadly, the Radloffs are not alone – hundreds of other players and their families have similar stories.  As stated in the motion filed on their behalf, only 7% of the players and families who have filed claims for compensation have received payment.  “The claims process for Mr. Radloff has evolved into a thicket of privately litigated, changing standards for claim packages, unpredictable and changing standards of review that is not what the Settlement Agreement promised retired players,” writes the Radloffs’ attorney.  “Within this Settlement, the NFL appears to have employed the same tactics case by case, player by player that it has used in the processing of player claims for disability benefits under the Collective Bargaining Agreements. On information and belief, this is the NFL modus operandi to delay payments and frustrate the players and their families, hoping they will give up.”

The motion filed on behalf of Wayne Radloff is far from the first attempt by attorneys to straighten out the fiasco that the settlement has become.  Patrick Tighe of X1 Law filed the first motion in August, stating similar and in some respects identical claims of that in the Radloffs’ filing.  When asked for his impressions of this filing, he stated:

So now, after his Co-Lead Counsel has been fighting us on the issue, Sol Weiss files a motion citing the same issues and making the same arguments. Ironically, Sol Weiss is asking who are the “parties” that the claims administrator has been talking too because it is not his office, it must be Seeger and the NFL…I’m interested to see the Court’s reaction.”

Mr. Tighe is likely interested to see how the Court responds since his motion and others filed afterward have been opposed by the NFL which is not surprising but also by Chris Seeger who was appointed to represent the Class and look out for their interest.  This hasn’t happened, and for reasons yet to be understood, Judge Brody has ruled in Mr. Seeger’s favor each time.

For now, the Radloff’s and hundreds of others wait, anxious, stressed and wondering if they will ever see the relief that was promised to them.

Epilogue: The day after this motion was filed, the Radloffs’ claim was approved for half of the projected amount.  While the approval sounds good, the timing is no coincidence.  Approval of the claim forced their attorney to withdraw his motion for a hearing as moot, and the slashing of their award appears to be in retaliation for speaking out against the unfair processes being exacted on the players.