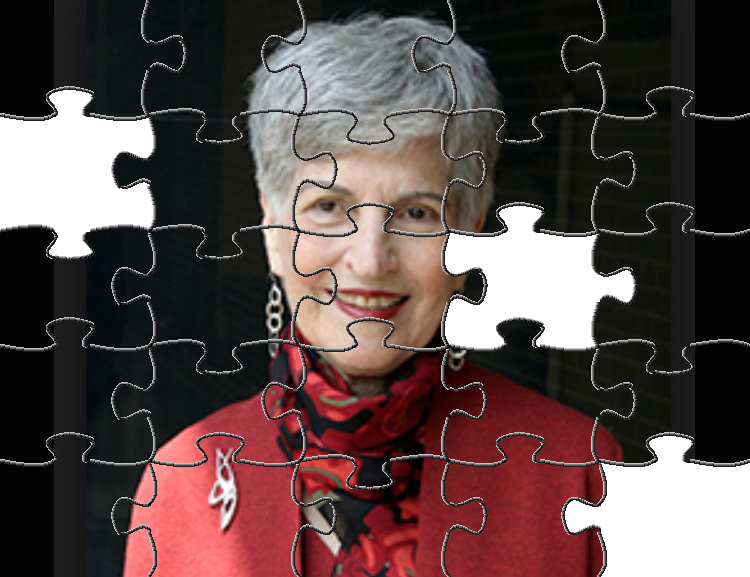 On Wednesday Judge Anita Brody issued a ruling in the NFL Concussion Settlement that prompted a wave of anger and despair for many members of the class action settlement.  In her order, Judge Brody denied the motion of Gene Locks in which he asked the court for permission to share administrative duties in the Settlement alongside Co-Lead Class Counsel Chris Seeger.

The first year of claims processing has been very trying for the retired players and their wives.  Many of those with Alzheimer’s and dementia claims have found themselves targeted for fraud.  Hundreds of others found themselves caught in a seemingly endless cycle of “preliminary review” in which their cases never seem to move forward.  Other legitimate claims have been outright denied because of the NFL’s aggressive opposition to claims and their influence jointly with Chris Seeger.  As of April 16, of 1,135 dementia claims filed only nine (9) have been paid.

In March, Locks Law Firm filed a motion asking to share in administrative duties in the Settlement.  Locks, who is already a member of Class Counsel represents approximately 1,100 players in the Settlement, whereas Co-Lead Class Counsel Chris Seeger represents very few.  Locks’ familiarity with the needs of the players and his interest in seeing claims processed and awarded in a timely manner prompted numerous retirees and their family members to write a letter to Judge Brody asking her to grant the Locks motion.  Yesterday she denied it. 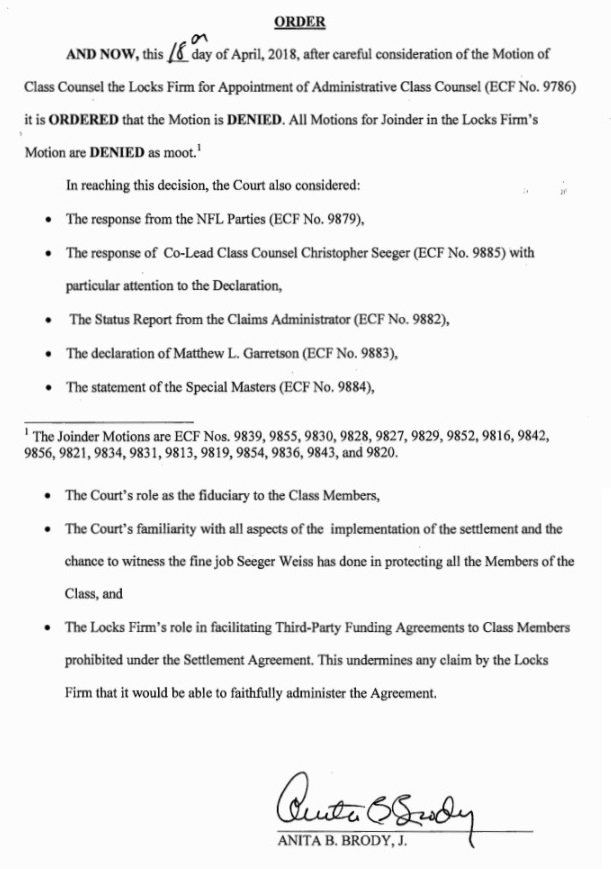 Judge Brody’s order is disturbing in many ways.  First, she cites the “authorities” on whom she said she based her opinion; NFL Parties, Mr. Seeger, Claims Administrator Orran Brown, BAP Administrator Matthew Garretson, and the statement of Special Masters.  Note whose views she did not apparently consider.  That of Locks Law Firm, who filed the motion, nor of any of the numerous law firms who filed joinder with the motion, nor the one pro se class member who attempted to file joinder and inexplicably found her motion absent from the docket, nor the 200+ Class Members who signed a letter urging her to approve the motion.  This was the reaction on a players’ and wives’ Facebook group when it was announced that the motion had been denied. 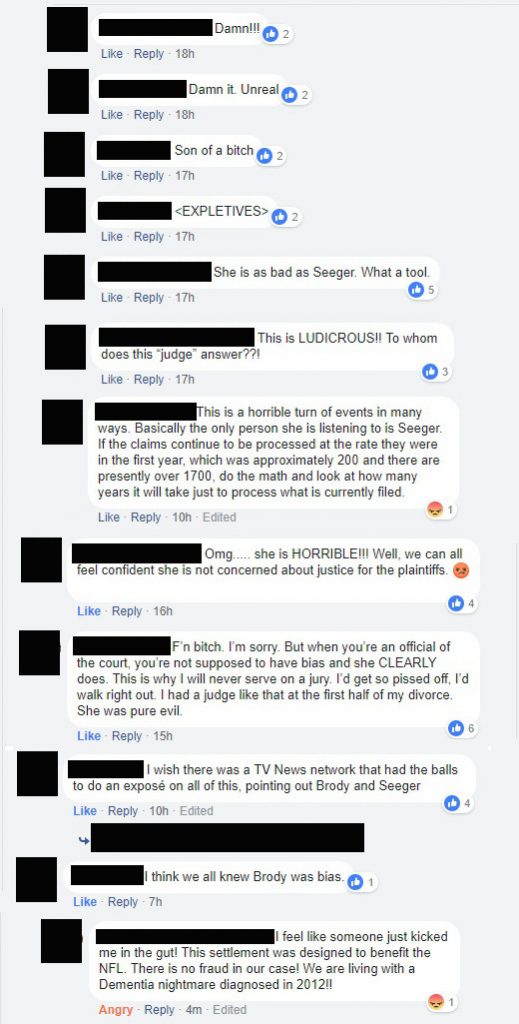 I took phone calls from numerous players and wives following the announcement and each expressed dismay and frustration that there seems to be nothing they or their attorneys can do to have their voices heard.  The Settlement that promised to be a lifeline now feels more like a death sentence.

In the aftermath of the ruling, a journalist who did a great deal of reporting on the early stages of the Settlement related that it was commonly said that “Judge Brody wanted to be the judge who saved football.”  Neither the journalist nor I can substantiate that statement but nevertheless, it appears to be the end-game.

Equally troubling is Judge Brody’s assessment that Mr. Seeger is “doing a fine job,” followed by what appears to be a cheap shot at Mr. Locks, “The Locks Firm’s role in facilitating Third-Party Funding Agreements to Class Member prohibited under the Settlement Agreement. This undermines any claim by the Locks Firm that it would be able faithfully to administer the Agreement.”

The observer must ask – why the double standard.  Mr. Locks’ “facilitation” both as indicated in Mr. Seeger’s opposition brief and other sources indicates that he merely signed off on loans/assignments his clients wished to pursue, some of which took place prior to the final status of the Settlement.  While the loans may be undesirable and predatory in nature, some class members on the verge of foreclosure or in need of medical treatment, or other pressing need, felt compelled to compare the lesser of evils and receive the funds.  As an attorney it is not Mr. Locks role to dictate to a client the loans they may or may not pursue.

Mr. Seeger, however, served on the Board of Directors of settlement funding company, Esquire Bank and only resigned from his position there in 2016, shortly after the New York Times ran an article entitled, “After N.F.L. Concussion Settlement, Feeding Frenzy of Lawyers and Lenders.” According to emails submitted to the Court by Attorney Craig Mitnick, accompanied by a letter, it appears that he actually worked to solicit business for Esquire.  Isn’t this a much more egregious threat to “faithfully administer the Agreement” than to sign off on a player’s loan which isn’t even his call?  One would have to ask why she rapidly placed the letter incriminating Mr. Seeger under seal while choosing to point a finger at Mr. Locks for a much less serious matter.

The court has placed intense scrutiny on a Seeger-selected group of Third-Party settlement funding practitioners but has turned a blind eye to Mr. Seeger’s involvement as a director of Esquire Bank.  The Settlement was negotiated and defended by Mr. Seeger during his tenure at Esquire, which is affiliated with an off-shoot funder, LawCash.

There are far too many missing pieces to this puzzle.  Why has Judge Brody ruled consistently for Mr. Seeger and since the Settlement became final never ruled in favor of any other attorney unless it was NFL Counsel Brad Karp filing jointly with Seeger?  There appears to be a concerted action to neutralize attorneys who represent players in the Settlement.  Players were told by both Mr. Seeger and the NFL that they did not need individual counsel, and actually discouraged from hiring a lawyer.  Isn’t it reasonable to ask how a brain-damaged person should be able to navigate a complicated claims process with a 69-page FAQ?  As I pointed out in a previous article:

I shouldn’t be writing a fourth article on NFL Concussion Settlement FAQs.  I shouldn’t have to write four different articles including a 4,200+ word essay strictly on FAQs describing the claims process.  But here we are.  It is beyond me how a neurological impaired retiree is supposed to comprehend a 69-page set of FAQs that present more questions that answers, or at the very least in which the answers present numerous additional questions.  I have to wonder if NFL players who are dealing with a brain filled with globs of tangled tau-proteins will even make it past the first section of the FAQs or even my writing and if they do, they’ll remember what was written in one paragraph as they move on to the next.  I already know the answer. Most won’t.

The FAQs only cover submission of claims. Few claims are being approved.  In the case of a denial, how is the player supposed to comply with 12-pages of Rules supplied by Special Masters and written in the language of legalese?  Since the Claims Administrator upon instruction of NFL and Co-Lead Class Counsel has audited about half of the claims submitted under the exaggeration of fraud presented by the NFL, how is an unrepresented Class Member to have any clue as to proving his innocence?  Even attorneys are having a great deal of difficulty navigating the ever-changing rules and obstacles placed in the way of seeing a claim through to an award.

The rules for attorneys who worked on behalf of the Class and were designated to receive at least reimbursement of their expenses and a nominal amount of compensation for their work, are finding themselves subjected to an order accompanied by a lengthy questionnaire that interrogates them about their individually retained clients and asks nothing that has to do with the work they have submitted hours and expenses for. 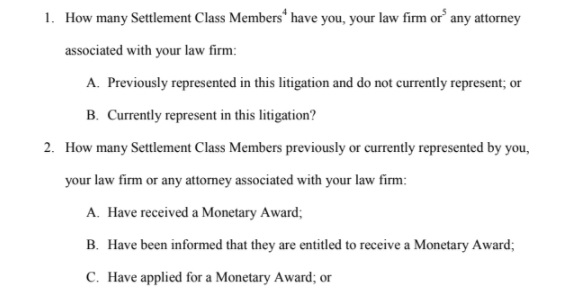 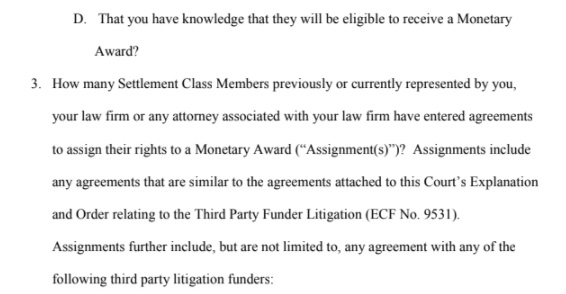 A list of 15 Litigation Funding Providers and their subsidiaries follows.  Conspicuously absent from the list are Esquire Bank and LawCash. 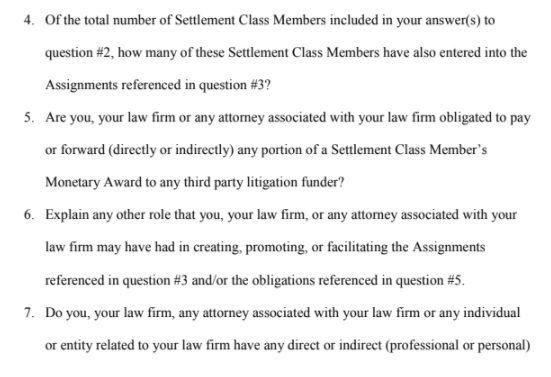 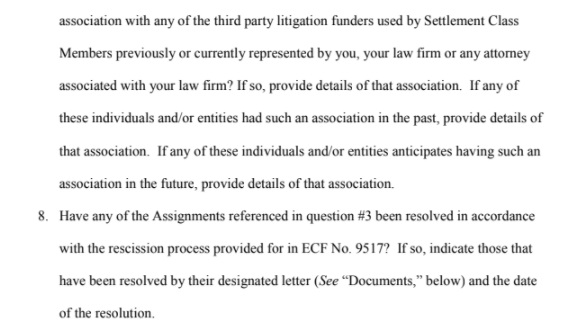 What will Judge Brody do with this information?  If she doesn’t like their answers to her questions, will she disqualify them from the common benefit?  Individual contingency fees have already been capped at 22% and if she approves the 5% holdback that Seeger has requested that will drop their recovery to 17%.  Few can afford to work for that amount and at least one major firm has already started selling off its client contracts at around 50 cents on the dollar.  Once this comes full circle, desperate players and their families will be at the mercy of the NFL and Mr. Seeger with no allies to intervene.  Those who have managed to remain financially solvent will likely go bankrupt.  Already many have lost their homes and numerous unsavory agreements with lenders were sealed to in order to prevent foreclosure on others.  As the medical bills mount, states will wind up absorbing the cost through their Medicaid programs.  Is it not enough that taxpayers largely fund the stadiums where professional football is played in order to save billionaire owners from footing the bill?  Couldn’t a $14 billion per year league at least afford to take care of its retirees – especially those they concealed the dangers of brain injury from?  Perhaps Judge Brody really does want to save football, but a better legacy would be to save football players and let the sport sink or swim on its own merit.  Mr. Seeger said his objective was a “bucket of money.”  Judge Brody is a puzzle.  One that the Third Circuit Court or Congress should attempt to unravel.