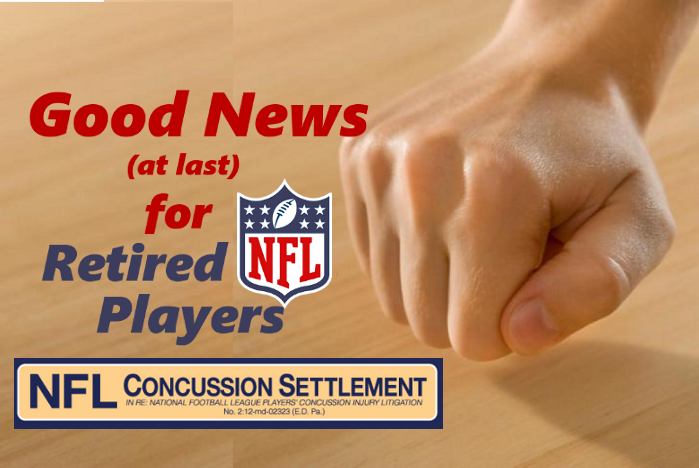 EXCLUSIVE: Advocacy for Fairness in Sports has obtained a non-public opinion by NFL Concussion Settlement Special Master Wendell Pritchett regarding application of the term “generally consistent” as referenced in the Settlement Agreement.

Those who’ve been following the settlement since implementation began almost two years ago are aware that the “generally consistent” term has been hotly debated as the NFL has sought to use it to discredit diagnoses that are not a clone of the rigid BAP processes outlined in the settlement.

Attorney Patrick Tighe was the first to bring this to the court’s attention when he filed a motion to determine proper administration of claims under the settlement agreement in August 2017.  In the motion, he demonstrated how pre-effective date claimants were subjected to requirements not outlined in the agreement which compromised their ability to recover their damages and called the requirements a de facto amendment to the settlement agreement.  Numerous other firms representing individual claimants to the settlement filed similar motions or joinders in support, but on November 3, 2017, Judge Brody denied the motion, stating: 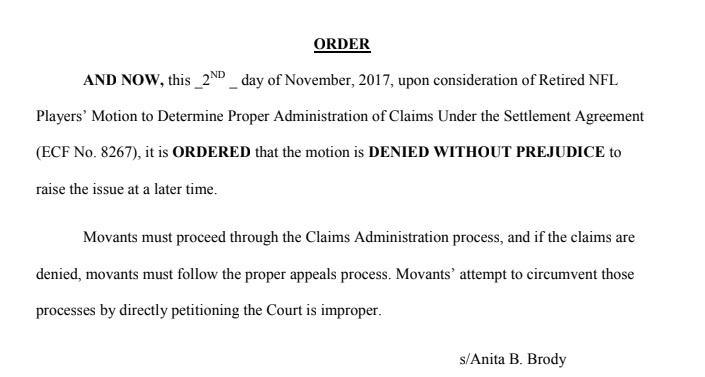 The issue wasn’t raised by anyone in an official position with the settlement class until, March 20, 2018, having apparently seen enough, Locks Law Firm filed a motion for appointment of administrative class counsel, stating, “The Settlement Agreement is in danger of failing its execution.”  Numerous firms large and small, including Co-Lead Class Counsel Sol Weiss filed joinder with the motion, which was opposed by both the NFL and Co-Lead Class Counsel Chris Seeger.  Despite the overwhelming support for intervention, Judge Brody denied the motion on April 18.

Shortly after the Locks Motion was filed, the NFL in its response alleged massive fraud within the settlement and filed a separate motion asking for a special fraud investigator.  A hearing on the NFL motion was held on May 30, and after deferring a decision, unless the investigator should be requested by the claims administrator or Special Masters, Judge Brody granted the NFL’s motion on Special Master’s request, which seemed to be a strange reversal of position on their part.

At this point, prospects of having claims fairly evaluated seemed dismal for the class, with almost every ruling opposing their interests as mass audits proceeded and numerous claims were denied on what appeared to be trivial grounds.

As I reported on, October 12, however, the players seemed to get their first break when the Special Master denied the NFL’s attempt to mandate AAP review of all appealed claims, in another non-public ruling.

The Special Masters’ “generally consistent” opinion begins with a basic description of the dispute.

Special Masters asserted that for the NFL to prevail, they must meet the standard of “clear and convincing” evidence, which they have failed to do. 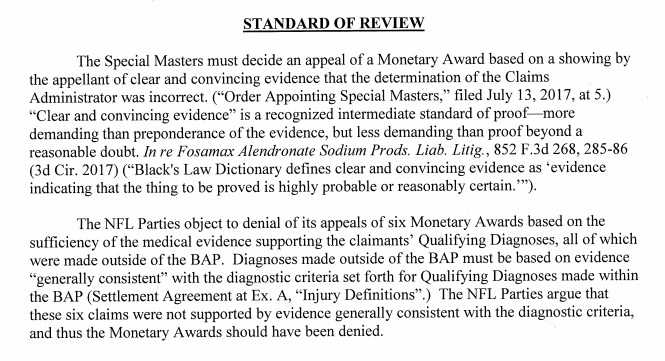 They also point to the terms to which the NFL agreed, and now apparently dispute in an episode of buyer’s remorse.

It seems in setting the bar for claims approval very high and creating significant hurdles for players to overcome in the claims process the NFL thought it had sufficiently mitigated its damages to only compensate the most severe and/or high profile cases of neurological impairment, while denying the majority of adversely affected players.  To the NFL’s dismay, they quickly learned that there are a lot of sick players who meet the high-bar of approval, and this seems to have facilitated their illegal demand for redefinition of settlement terms. 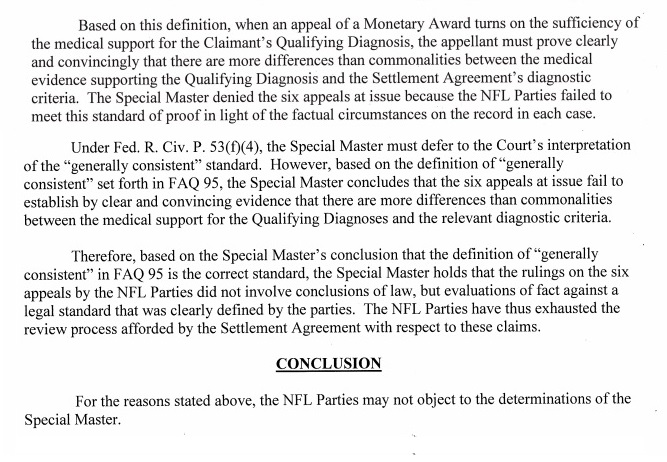 Perhaps Special Masters are tiring of the NFL’s relentless appeals of claims based on less than “clear and convincing” evidence that often borders on frivolous, and their unceasing drive to stop player compensation dead in its tracks.

Perhaps Special Masters have come to realize that the NFL has been appeased in most of its requests to protect itself from alleged fraud and stringent audit measures have been enacted to protect the league’s interest, including agreement to the special fraud investigator the NFL demanded.  Perhaps they’ve come to recognize the nature of the NFL, and its tendency to demand a mile for every inch given.

While it’s impossible to know the mindset of Special Masters in issuance of their ruling, it is nonetheless welcome news to retired players whose claims have been held up for many months and in some instances, more than a year.

The path for players still will not be without challenges due to the limitations agreed to by the settling parties, but at least, it’s reassuring to see that the “generally consistent” standard will not be wiped out or redefined as identical to the BAP standard.

The NFL has until November 7 to appeal to Judge Brody, but hopefully, in the interest of maintaining the “fair, reasonable, and adequate” settlement and its terms which she approved, she will agree with the people she appointed to oversee its fairness and uphold their ruling should it become necessary.

Permanent link to this article: https://advocacyforfairnessinsports.org/nfl-concussion-settlement/sm-generally-consistent/