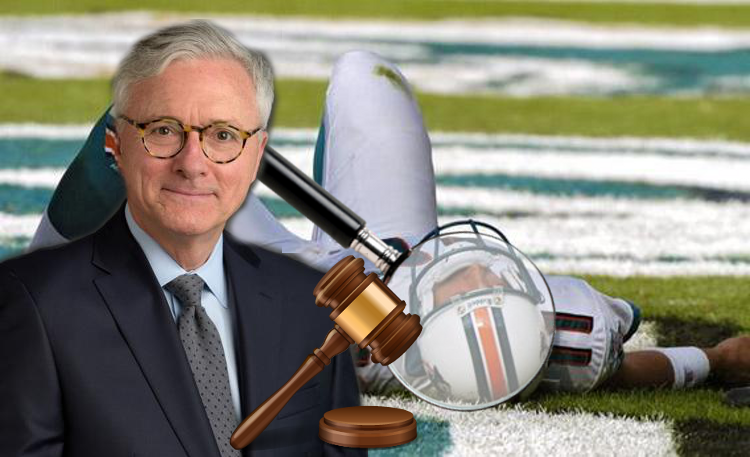 After months of NFL demands for a fraud investigator for the concussion settlement, and an initial deferment on the decision by Judge Anita Brody, on September 12, she granted the NFL’s motion after an unexpected reversal of position by Special Masters, and on December 10, ordered the appointment of former Eastern District of Pennsylvania judge Lawrence F. Stengel.

As I’ve reported, the NFL has alleged massive fraud in the settlement on the part of players, doctors, and attorneys, in what I believe is a ploy to avoid payment of claims.  I attended the hearing on the NFL’s motion in May and the evidence presented by the NFL and was circumstantial at best. I’ve seen more of the same through my investigation of the NFL’s attacks on well supported individual claims as well as their appeals of Special Masters in their decisions to reject mandatory AAP review of post-effective date claims and the adopted interpretation of the “generally consistent” standard incorporated into the settlement agreement.  It seems apparent the NFL will use any device at its disposal to reduce the league’s liability.

In her order, Judge Brody states that “the Parties” have consented to the appointment of Mr. Stengel, but that seems a formality since an investigator became inevitable with her September order; the finality only rested on who would be selected for the job.

At the NFL’s request and confirmed in her order the investigator will have the authority to pursue sanctions if wrongdoing is found.

Note that all work by the investigator will not appear on the public docket.  I find this disturbing, but not at all surprising.  Judge Brody has directed that all discussion regarding settlement implementation will take place off the docket, using the claims administrator as a third party for communication.  Recently attorney Wendy Fleishman was chastised for filing a claim appeal on the public docket.  All the NFL appeals of Special Masters’ rulings have also taken place off the docket and have been reported as I’ve been able to acquire the non-public documents.

Judge Brody states that the investigator will be focused on attorneys and healthcare professionals for filing “potentially fraudulent” claims.  She writes that Mr. Stengel will investigate at the request of Special Masters, the NFL, Co-Lead Class Counsel, or the Claims Administrator, and while pre-effective date claims will be the primary focus, post-effective date claims based on MAF and BAP diagnoses may also be investigated.  The investigator will be tasked with determining “intentional misrepresentation, omission, or concealment” in claim submissions.  Prior to the investigator’s appointment, misrepresentation, omission, and concealment were the focus of the vast audits within the settlement but there was no authority to determine intent.  That’s an important distinction.   If someone is accused of intentional misconduct and rightly or wrongly convicted, it could result in ruined careers, loss of licenses and the possibility of criminal charges.

I fear this will have a very chilling effect on settlement claims.  There is much disagreement as to what amounts to a qualifying diagnosis.  Most doctors (at least in private practice) and attorneys representing players would consider a player sufficiently impaired by dementia if his cognitive abilities are diminished to the point of disrupting normal attempts to maintain employment or perform everyday activities.  The NFL, on the other hand doesn’t consider a claim legitimate unless the player is so impaired that he has little in the way of self-awareness, can dress himself, drive, or do many things that most Alzheimer’s patients do until the final stages of disease progression.

Will doctors fail to qualify players unless they are practically on their death beds in order to protect their medical licenses?  Will lawyers refuse to submit a claim unless it’s a “slam dunk” for approval?  I’d predict a great deal of caution, and sort of a wait-and-see approach to see if anyone is made example of, and how strong the case for intentional fraud versus disagreement with the NFL’s assessment of sufficiently impaired.

Players may also be investigated.

Judge Brody writes that if Co-Lead Counsel or the NFL object to an authorization of a proposed investigation they may request that “Special Masters convene an informal conversation with the Court to resolve the objection.”  She has ordered that the investigator provide a confidential status report to Special Masters on a monthly basis and quarterly to the court.  Again, all of this will take place off the docket and it’s unlikely the party under investigation will even be aware the investigation is taking place—at least initially, when presumably they would be given a chance to respond.

According to the order, compensation for Mr. Stengel will come from the uncapped monetary award fund as opposed to the 5% holdback from class members’ awards for compensation of class counsel; therefore, the NFL will be paying for the investigator.  She stipulates that ex parte communications between Mr. Stengel and the NFL or Co-Lead Counsel must be approved by Special Masters.

Lawrence Stengel retired this year from his role as Chief Judge of the United States District Court for the Eastern District of Pennsylvania (EDPA), where he held that position for exactly one year—August 1, 2017 through August 1, 2018.  Prior to that he served laterally with Judge Brody at EDPA from his appointment by President George W. Bush in July 2004 until his promotion to chief judge.  After his retirement he joined the Philadelphia law firm Saxton and Stump, where he chairs the firm’s internal investigations group. 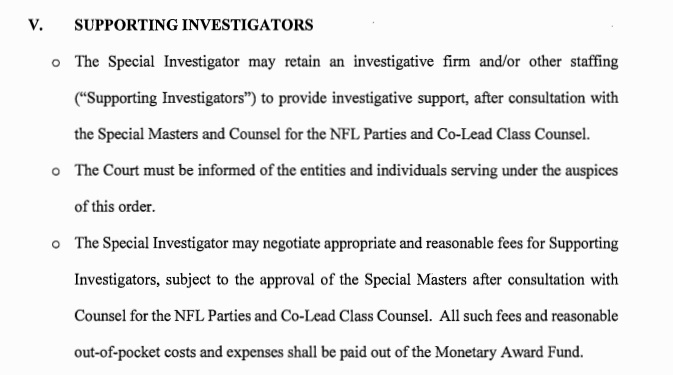 It is unknown at this time (and possibly unknowable if all investigations details are suppressed from the public docket) as to if Stengel will retain his firm for assistance or if the work will be delegated elsewhere.  If the former, this seems to constitute a strong conflict of interest, in that more investigations equal more billable hours for the firm. It’s unlikely the NFL will want to pay for investigations that don’t wind up as convictions.  I find it sad that the NFL would prefer to pay for investigations of its former players than to compensate them.

According to the order, the special investigator will serve a term of one year, subject to extensions, and will be granted immunity “for performance of work pursuant to this order… No person or entity has the right to institute any action against the Special Investigator or any Supporting Investigators for any matter covered by this immunity, except with respect to willful misconduct.”

In his judicial service Lawrence Stengel presided over a few high-profile murder trials and dismissed Joe Paterno’s lawsuit against Penn State regarding his firing after the Jerry Sandusky scandal erupted; a decision that was upheld by the Third Circuit.

More than ever, a favorable ruling from Judge Brody upholding Special Masters’ decision in the NFL’s appeals of “discretionary use of AAP” and “generally consistent,” is essential, if players are to be compensated for the harms they’ve suffered.  What will happen next is anyone’s guess.

PDF of the order:

Permanent link to this article: https://advocacyforfairnessinsports.org/nfl-concussion-settlement/stengel-appointment/