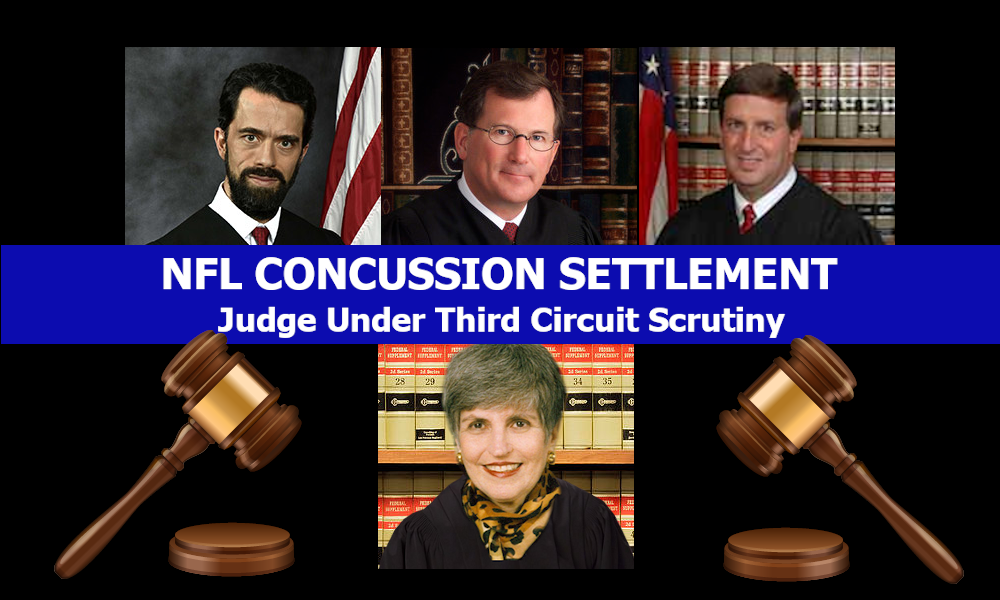 A few days I wrote that a litigation funder is seeking a writ of mandamus at the Third Circuit, asking the appeals court to enforce their Opinion and mandate. Petitioning for a writ of mandamus is viewed as an extraordinary measure, and as such, it is considered bold and used infrequently. The Third Circuit wasted no time in seeking answers from NFL Concussion Settlement Judge Anita B. Brody.

Mandamus is governed by FRAP Rule 21.

In comments to Alison Frankel of Reuters, attorney Peter Buckley of Fox Rothschild, who represents Thrivest said that requiring a response means that the Third Circuit is taking the matter seriously.

Because mandamus is considered such an extraordinary writ, the appellate court is permitted to deny without an answer if it feels the petition is frivolous or without merit.  One attorney I spoke with said that he hadn’t been following the funder litigation closely but based on Buckley’s reputation he felt Buckley would never petition for mandamus unless he felt he had a valid argument on which he’d prevail.

If you haven’t been following the litigation funder saga in the NFL Concussion Settlement, the controversy stems from a December 2017 order issued by Judge Brody that voided agreements for players’ settlement advances across the board as “prohibited assignments.”

The matter made its way to the Third Circuit where the appellate panel found that Brody had overstepped her authority in voiding agreements where no “true assignment” existed.  True assignment was defined as an agreement in which funders seek to collect directly from the claims administrator as opposed to recovering from players after their settlement proceeds have been received.  Thrivest’s agreements are based on the latter, which the Third Circuit found to be outside Judge Brody’s jurisdiction.

Despite the ruling, settlement advances are being handled pretty much as they were prior to the partial reversal of her order, and the claims administrator is still trying to strong-arm funders like Thrivest into accepting rescission as provided for in Judge Brody’s order and categorizing the loans as prohibited assignments.  According to Thrivest, the claims administrator is still sending out notices to players that their loan agreements are invalid.

As Thrivest notes in their petition, this is not only costly to the lender but also the player.  While the validity of the loan agreement is litigated, interest continues to accrue and should the matter go to arbitration or federal court, the contracts also permit the funder to collect attorney fees from the player.

Thrivest provided an example in a prior brief in which the delays have cost a player over $200,000 in interest alone.  I might also note that the massive audits conducted by the claims administrator are costly to players in much the same way because every month of delay in the processing of claims until the player’s award is issued can amount to tens of thousands of dollars if he took a partial advance on his award.  In some cases, the player may even wind up upside down, owing more than the entirety of the award.

Later in a twitter thread, Boysen expressed some personal observations with which I agree.

And if you believe Thrivest, that’s cost a handful of ex-NFL players who are already struggling mightily 100s of thousands of dollars as a result.

Just a crazy situation all around.

Now we wait to see how the 3rd Circ responds

The Third Circuit has given Judge Brody until October 4 to explain. 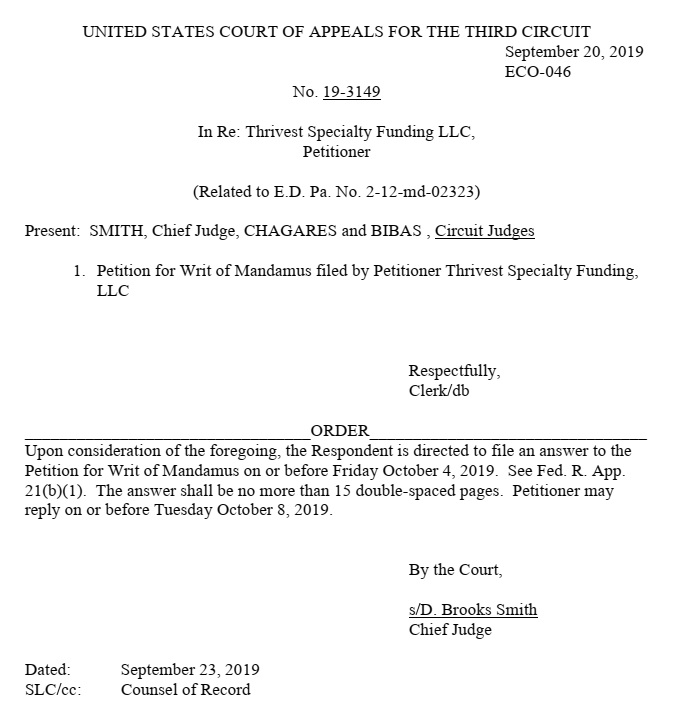 Afterward, a reply from Thrivest is due on October 8.

Because of the rarity of petitioning for a writ of mandamus which is viewed as a last resort form of relief, it’s interesting that mandamus has been sought in two prominent cases within a one-week time frame.  The other case is the hotly contested opioid litigation which is rapidly nearing a bellwether trial date.  In the opioid case, a tentative settlement has been reached between several drug companies and a nationwide consortium of cities and counties adversely impacted by the opioid crisis.  The State of Ohio has petitioned for mandamus seeking to halt the upcoming bellwether trial on the premise that the city and county litigation “infringes on Ohio’s sovereign interests and its ability to recover” damages at the state level.  Judge Dan Polster, who is overseeing that litigation has also been ordered to respond by October 2.

The underlying tone in both petitions is bias on the part of a federal judge.  In Polster’s case, other parties are seeking his recusal based primarily because of his insistence on a settlement, and while I personally feel that often when judges push too hard for a settlement early in litigation, and the result is a less than ideal settlement, it seems to be the norm.  The concussion settlement is a good example in that while it has been of great benefit to players with neuromuscular disease, like named plaintiff, Kevin Turner, who died from ALS before the deal was finalized, the maze of difficulties for players suffering from cognitive problems like dementia could have perhaps been avoided.

My agreement regarding Thrivest’s position should not be construed as sympathy for predatory lenders but rather correct interpretation of the law.  Retired players are just the tip of the iceberg when it comes to predatory lending practices and athletes.  NFLPA Executive Committee member Russell Okung of the LA Chargers related recently in Players Tribune how when it appeared he had solid draft potential that predatory lenders were lined up offering loans against future salary to a broke college student, which he’d have to struggle to repay once he found his place in the NFL. Adrian Peterson, who currently plays for the NFL’s Washington D.C. franchise is now embroiled in a gnarly civil lawsuit with another predatory lender—one that purchased his debt from none other than Thrivest and seeks to collect interest mounted on top of interest.  While I have little sympathy for those lenders, especially in the context of exploitation of vulnerable college athletes and cognitively impaired retired players, the loans are legal and largely unregulated.  That’s on Congress and state legislators.

The silver lining to the lender saga as I see it is that the troubled settlement and the questionable decisions of the judge delegated to administer it will be placed under scrutiny.  Violation of an appellate mandate is a serious charge and this isn’t the only settlement issue before the Third Circuit.  Objections to the manner in which Judge Brody determined attorney fee allocations has been on the burner at the higher court for well over a year and is now being briefed.  Amon Gordon has appealed the unjust denial of his claim to the Third Circuit, as well.  Combined, these issues should hopefully force some scrutiny of Judge Brody and the entire claims process.  There are no guarantees this will happen, of course, but it is a conceivable outcome, especially if Judge Brody is found to be out of compliance with an appellate mandate.  One class member asked me what would happen if the Third Circuit grants mandamus and Judge Brody still refuses to comply.  I told him it was highly unlikely, but then again, nothing about this settlement has been predictable, so who knows?  My best guess would be that proceedings to remove her from the bench would begin, and as a senior judge, she would likely retire rather than undergo a process that could strip her of her job and subject her to highly publicized scrutiny.  If this should happen, however, it would indeed be a silver lining to a very gray cloud.