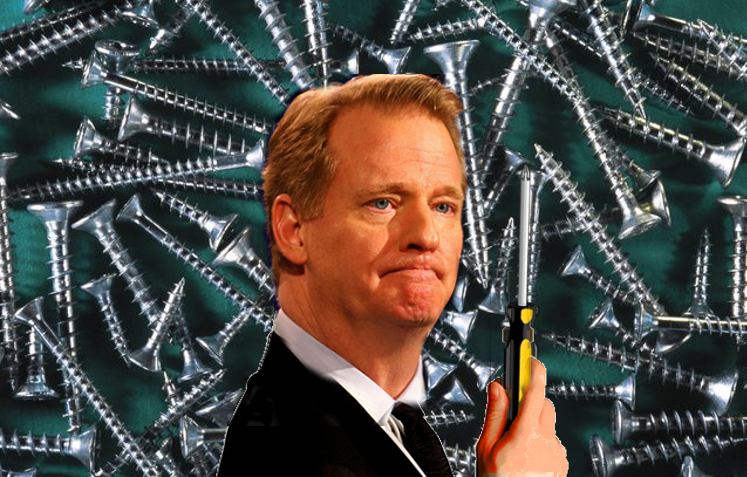 Exclusive:  Advocacy For Fairness in Sports has obtained non-public concussion settlement documents which provide a glimpse into the NFL’s latest attempt to put the screws to players hoping to hold the league accountable for diagnosed neurocognitive damage sustained during their football careers.

On August 30, the following email was sent to several attorneys representing players from Claims Administrator BrownGreer.

As noted in item “2” as a result of NFL objections, twenty-three approved claims have been placed on hold until the Court issues a ruling as to the NFL’s demands.  Item “6” denotes the secretive nature of settled class action and MDL proceedings in stating that no objections will be filed on the public docket; instead, only a court ruling will appear.  The information Advocacy for Fairness in Sports has obtained (the three letters referenced in the email) are not on the public docket, and it is unlikely that even the some attorneys impacted were aware of the challenges prior to the BrownGreer email.

The beginning of the NFL’s letter to Special Master Pritchett appears harmless and reasonable enough, until one considers the climate in which it originated.  As reported in the spring, the NFL filed a motion with the Court asking for a special fraud investigator to audit claims.  A hearing on the motion was held on May 30, and on July 18, Judge Brody issued a notice of her decision to defer.

In their letter, the NFL seeks to have appeals panel (AAP and AAPC) doctors intervening in nearly all claims determinations and as a result twenty-three claims that were approved by the Claims Administrator, appealed by the NFL, and upheld by Special Masters are now for all practical purposes stayed leaving players once again in a position of uncertainty.

In March, when Locks Law Firm filed a motion seeking an administrative role in claims implementation, the firm included an exhibit featuring an email that points to a manual that has been issued to AAP/AAPC doctors, the purpose of which purports to instruct the doctors in evaluating claims. 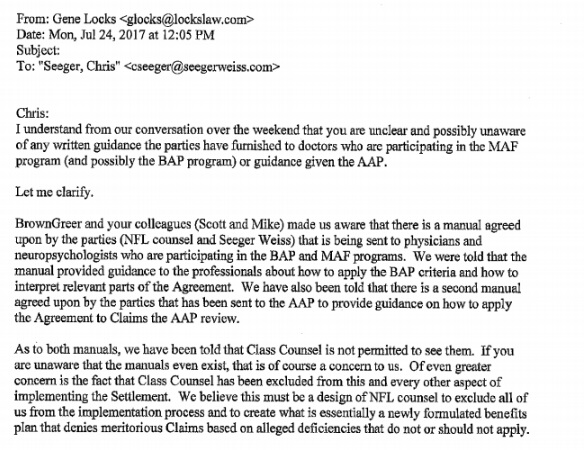 Some excerpts from the Locks motion detail the NFL’s war against its retired players and their reluctance to abide by the settlement terms they agreed to.

All of the allegations made by Locks are further substantiated by the NFL’s insistence on broad AAP involvement coupled with the criteria the league tends to use for rejecting potential AAP candidates.

Most of the players enrolled in the settlement because they are experiencing symptoms associated with CTE and were assured that even though the NFL refused to allow CTE as a compensable condition, the effects of dementia precipitated by presumed CTE were presented as a valid qualifying diagnosis.  If none of the doctors chosen for the AAP believe in CTE, this is extremely troublesome and also indicative of how they might be predisposed to dismiss anything that appears to indicate the existence of CTE.

The Locks motion also brought out the fact that the NFL refuses to allow any doctors on the AAP who have personally treated retired NFL players, and because of this might have greater insight into their problems than doctors without personal experience in this area.  Examples of doctors the league refused to consider on this criterion were highly qualified neurologists from Duke, the University of Pennsylvania, and a Mayo Clinic-trained neurologist from Emory University.

While rejecting some of the doctors best suited to evaluate claims of retired players, the NFL argues in their letter:

The last line of the paragraph above draws attention to an escalation of the problems Locks unsuccessfully tried to bring to the Court’s attention.  At the time the Locks motion was filed most claims presented were pre-effective date claims which relied on diagnoses made by private physicians prior to the time the settlement was finalized.  Now the NFL is attacking the diagnoses rendered by MAF physicians they agreed to include as approved settlement doctors.

The NFL goes on to state, “Despite the fact that Qualified MAF Physicians are approved by the Parties…[t]he Parties did not personally interview these physicians or train them on all aspects of the Settlement program; instead, the Claims Administrator has provided them a manual and periodic alerts on various topics.” (Emphasis mine.)

Read the previous statement critically and it’s reasonable to conclude that unlike MAF physicians, AAP’s were personally interviewed and selectively screened by the NFL and were also “trained” by someone representing the league.  This merits the question, “Under what purported authority does the NFL undertake the training of doctors?” The obvious conclusion to draw from this inference is the NFL has carefully selected a small group of physicians they believe will be extremely critical of claims and favorable to a league position.  If this assumption is correct, then the reason for their insistence on AAP review becomes blatantly obvious.

As I noted in my last settlement update, the NFL seems to be preoccupied with two of the six domains on the CDR evaluation scale, which relate to personal grooming and home and hobbies.

Based on this excerpt, they seem to have the AAP focused on those domains as well.

While it might not be the smartest move, many retired players dealing with dementia continue to drive.  I’ve had probably dozens relate their experiences in getting lost while driving and either pulling over somewhere until they regain their bearings, or their wives find them – whichever comes first.  One wife related to me that for years her husband refused to be tested because he did not want to lose the independence of driving, and only finally relented when he started getting lost more frequently and the fear of being found by someone other than his wife eventually became stronger than his fear of losing his driver’s license.  Lest the reader should fear, however, that there are thousands of dementia-suffering NFL retirees endangering others on the road, I should add that most guys I’m aware of tend to realize their limitations and only drive within two or three miles of their homes.  And still they get lost returning from the grocery store, which, by the way is another area the NFL feels disqualifies their diagnoses.  Never mind that they headed out with a list of three items and managed to return home without any of them.

In my review of a number of approved claims that the NFL has appealed, the league has relentlessly searched for any internet and social media references of players showing limited signs of functionality, including a few photos pulled from social media accounts showing them doing activities that a third-grader could easily accomplish.

Moving on, the second letter attached to the email was a response from Co-Lead Class Counsel, Chris Seeger dated July 6.

Seeger goes on to state in the next paragraph, “Incredibly absent from the NFL’s five-page single-spaced letter is any reference to the one provision in the Settlement Agreement that specifically addresses the discretion afforded the Court and Special Masters with respect to the AAP’s and AAPC’s role and involvement with the appeals process.”

He then identifies specific instances in settlement provisions where AAP assistance might be useful or appropriate.

Seeger indicates that according to the negotiated agreement, diagnoses by the MAF and BAP physicians mutually agreed upon by the Parties should be considered “trustworthy,” and only subject to administrative review.

Numerous motions have been filed by various attorneys since implementation of the settlement began, accusing the NFL of trying to rig the settlement and rewrite it.  Though Seeger opposed each of those motions, it appears that he is finally in agreement with that assessment.

In the NFL’s response dated July 11, they assert that Seeger ceded authority to them when he sought approval of the settlement agreement.

As many have believed since settlement implementation began, despite the uncapped agreement, the NFL appears to be doing everything within its power to stay within the court-rejected original agreement of $765 million.  According the claims summary report dated August 27, $529,253,415 is the current total of approved awards which less than two years in, represents nearly 70% of settlement lasting 65 years.  Of the approval, however, only $306,953,558 is reported as paid, and it appears the NFL is determined to keep it that way.

As the NFL winds up their letter of rebuttal, they flatly state that not every neurologically impaired player should qualify for an award and almost allude to their skewed acceptance of the degree of impairment necessary to qualify.

Contrast the NFL’s arguments and behavior with this excerpt from the transcript of a Fairness Hearing for determination of settlement approval. 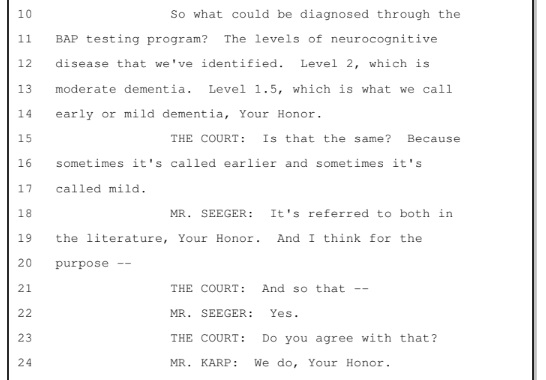 The statements made in court are consistent with the manner in which the settlement was presented to players and the public.  Assuming NFL attorney Brad Karp (and Seeger, if he truly understood what he agreed to) were under oath during the hearing, the above statements could conceivably be perceived as perjury. Perhaps as motions move forward on a shielded docket, someone should remind Mr. Karp of his statements on November 19, 2014, because unlike the characteristic secrecy behind claims implementation, earlier documents are public record, and his position changes should be duly noted to the Court and challenged if players are to benefit from the “fair, reasonable, and adequate” settlement the Court agreed to approve.